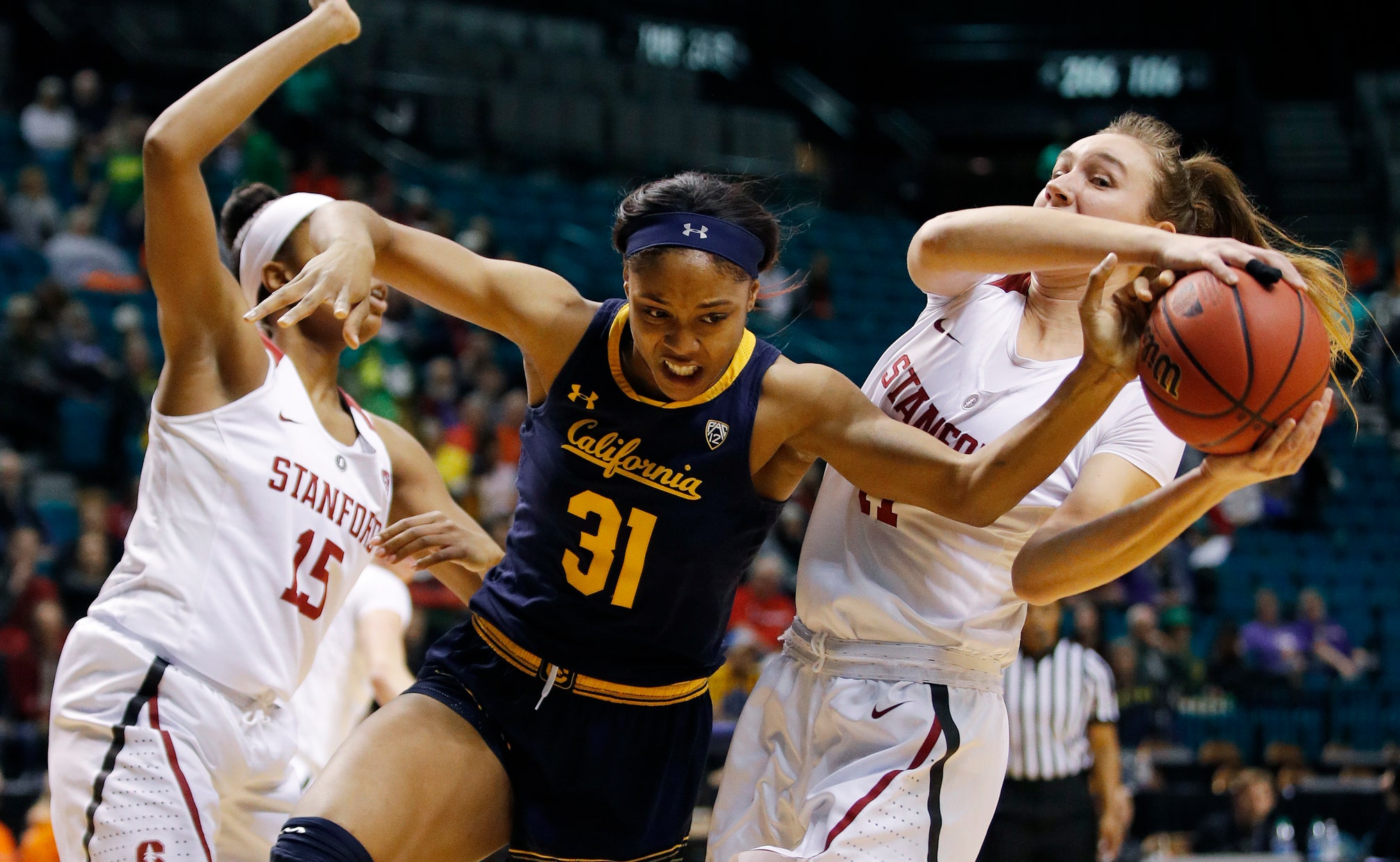 LAS VEGAS (AP) — With the game in doubt, Stanford got a 3-pointer from an unlikely source to spark a big game-ending run.

Leading 55-52 with 4:11 left, Shannon Coffee hit her only basket of the game — a 3 from the top of the key — and ignited a 17-2 run to lift seventh-ranked Stanford to a 72-54 win over rival Cal in the Pac-12 Tournament quarterfinals on Friday night.

The Bay Area battle was a back-and-forth affair. Coffee, who has been sporting a black mask most of the season after injuring her face, hit only her sixth 3-pointer of the season.

"The 3 was fitting as she has a knack for making big 3s against Bears," Stanford coach Tara VanDerveer said of Coffee, who made three of her 3s this season against the Baylor Lady Bears.

VanDerveer had total faith in her senior center's outside shooting touch.

"Early on in practice, Shannon was shooting the best on our team," the Hall of Fame coach said. "I have a lot of confidence in her 3. She's not a gunner, so I wasn't surprised at all. I was happy to see it go in, obviously."

Coffee was also a major factor in containing Cal's star Kristine Anigwe defensively. Aginwe, who came into the game averaging 23.2 points, missed seven of her first eight shots and finished with 14 points to go along with 14 rebounds.

"I was doing my work early. That's a saying Tara likes to say a lot," Coffee said. "I'm not going to let her get to where she wants to be. She's a great player. She's going to make shots. When she does, I can't hang my head."

Seventh-seeded Cal (19-12) beat Washington State in the opening round of the tournament.

Recee Caldwell led Cal with 17 points, including the 1,000th of her career. Cal led early, but despite cutting its deficit to a single possession a few times in the fourth quarter, the Bears couldn't ever get the lead.

"I genuinely felt if we could get over that hump, we'd tie it and win the game," Cal coach Lindsay Gottlieb said. "It puts some pressure on them. I thought there were a couple big turnarounds. ... And credit to them, when you have the chances and you don't take advantage, a great team is going to eventually do what they need to do."

Both teams struggled on offense early. Cal built an early 14-7 lead as Stanford went without a field goal for nearly 7½ minutes. The Cardinal trailed by three after the first quarter. The teams traded the lead in the second quarter and Cal was up 29-28 with 1:56 left in the half. Stanford scored the final four points to go into the break ahead 32-29.

The teams split their regular-season meetings with Cal winning the first at the buzzer. Stanford won the rematch two days later by 25 points.

WHO WAS THAT MASKED WOMAN?

Coffee has been wearing a mask since getting injured in practice just before the win over top-ranked Baylor in the middle of December. She started with a clear mask and hit the three 3's against the Lady Bears. She switched to the dark mask a few weeks later because she felt it gave her better vision.

As far as hitting four of her six 3s against teams that are nicknamed Bears, Coffee swears she does like the animal.

"I don't necessarily have anything against bears in real life," she said, grinning. "On the court, it seems that I do."

Stanford: Will play Washington in the semifinals on Saturday night.

Pac-12 Returns: What You Need To Know
Pac-12 football is back! When do games start? Is the conference playoff-eligible? Here's what you need to know.
4 days ago