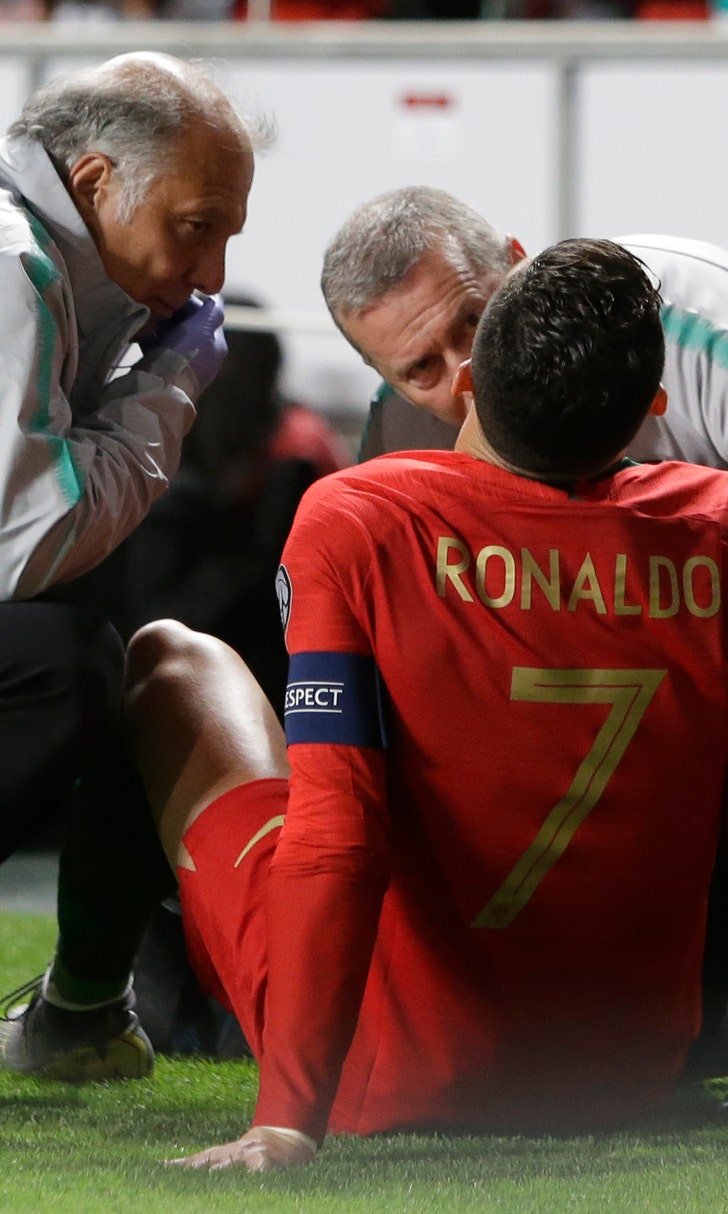 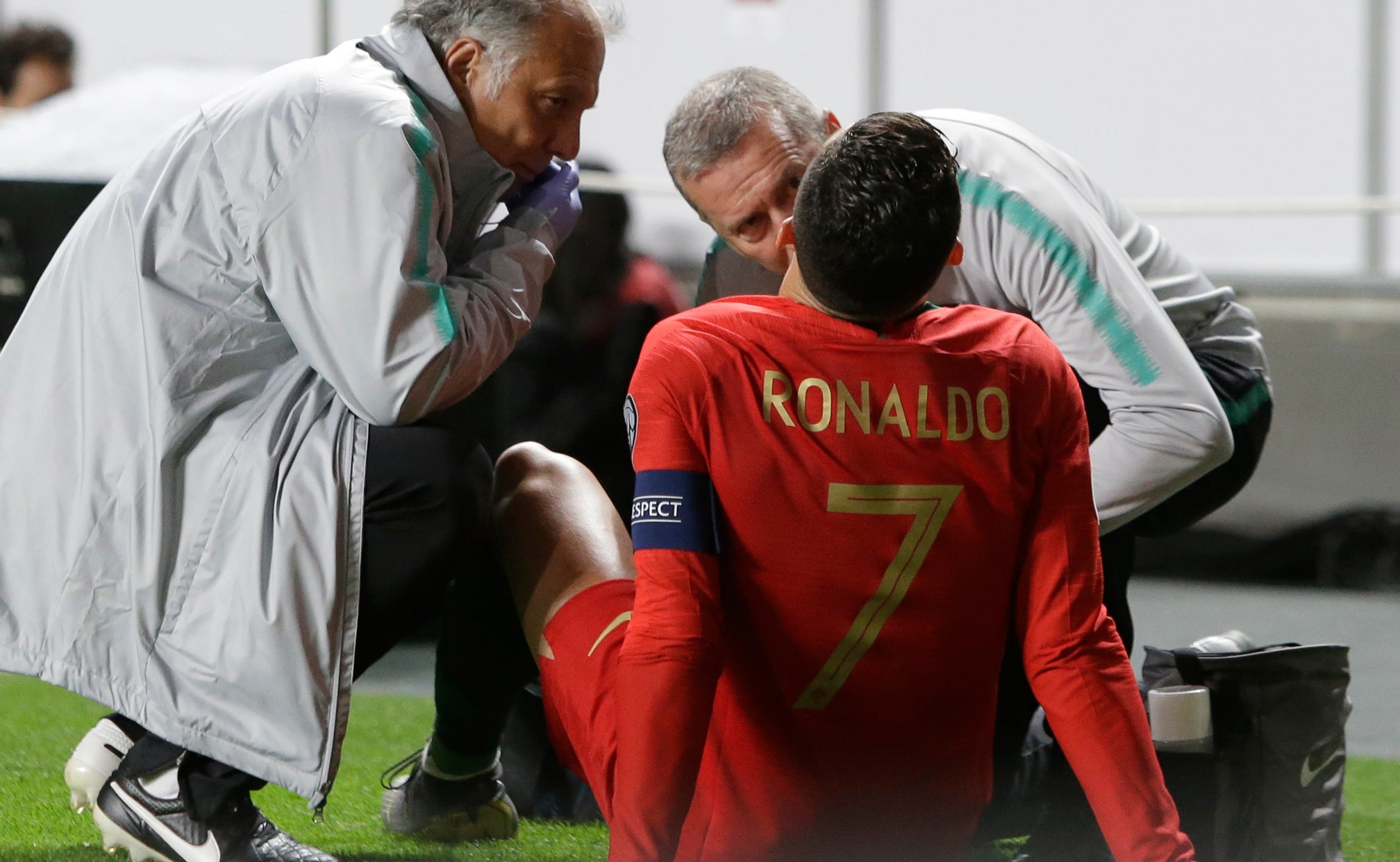 Things couldn't be going much better for free-scoring England and France.

Ronaldo hobbled off in the first half with an apparent right hamstring injury in Portugal's 1-1 draw with Serbia in Lisbon, which came three days after the titleholder's 0-0 draw with Ukraine also at home.

They are the Juventus forward's first games for his country since last year's World Cup, since when he was accused of rape in the United States. He has denied any wrongdoing.

While Portugal has made a slow start to qualifying, England and France are already well on their way to topping their groups.

England beat Montenegro 5-1 away to follow up its 5-0 thrashing of the Czech Republic on Friday in Group A. It is the first time England has scored five or more goals in successive games since 1984.

The match was marred by apparent racist chanting toward England's black players from Montenegro fans. England coach Gareth Southgate said the English Football Association would be making a complaint to UEFA.

After opening Group B with a 4-1 win over Moldova, France had a more impressive 4-0 win over Iceland with Kylian Mbappe and Antoine Griezmann scoring second-half goals.

As Ronaldo limped off the field, thoughts inevitably turned to Juventus' upcoming Champions League quarterfinal with Ajax. The first leg is on April 10, and Ronaldo said he could be back in time.

"I'm not worried, I know my body," Ronaldo told Portuguese media. "I should be back in one or two weeks."

Ronaldo pulled up hurt at the Stadium of Light while sprinting to try to reach a long pass. After leaving the field, the 34-year-old forward sat by the sideline and removed the captain's armband before doctors arrived and treated his leg.

Ronaldo stayed on the bench throughout the match, cheering on his teammates who came from behind to earn a point.

Danilo Pereira scored a goal of which Ronaldo would be proud, driving forward and curling a finish in off the crossbar from outside the area. That canceled out Dusan Tadic's penalty in the seventh minute.

Also in Group B, Ukraine beat Luxembourg 2-1 thanks to an own-goal in the third minute of injury time, and move into first place on four points.

England's latest five-star display ended up being overshadowed by matters off the field.

"In this day and age, you are ashamed that it can happen," Southgate said.

In a response to the apparent actions of Montenegro fans, Raheem Sterling celebrated his goal — England's fifth — by cupping his ears in front of the home supporters, who jeered the winger. A lighter was thrown onto the field.

Sterling, one of the superstars of the Premier League with Manchester City, has been vocal about racism in recent weeks, highlighting what he perceived to be negative press coverage toward black players and saying there needed to be more done to combat it.

Speaking after the Montenegro game, he called for stadium bans for teams with fans who racially abuse players,

"It's now time for the people that are in charge to put a real stamp on it," Sterling said, "because you can fine someone but what's that going to do?"

Ross Barkley scored twice, while Michael Keane and Harry Kane added the others in another encouraging display by England, which reached the World Cup semifinals last year and will play in the inaugural Nations League final four in Portugal in June.

In the group's other game, Kosovo marked its first Euro qualifier since becoming a member of UEFA in 2016 by drawing with Bulgaria 1-1 at home.

France coach Didier Deschamps kept the same lineup and was rewarded with another easy win for the world champions.

Defender Samuel Umtiti scored the opening goal in the first half and Olivier Giroud, Kylian Mbappe and Antoine Griezmann completed the win after the break.

Giroud's goal was his 35th in internationals, leaving him France's outright third highest-scoring player ahead of David Trezeguet.

Mbappe made it 3-0 with a clean finish in the 78th after collecting a subtle throughball from Griezmann, who completed the rout six minutes from time on the counterattack.

In other Group H matches, Turkey beat Moldova 4-0 and Albania won at Andorra 3-0.

France leads the group on goal difference from Turkey.

Cristiano Ronaldo
share story
those were the latest stories
Want to see more?
View All Stories
Fox Sports™ and © 2020 Fox Media LLC and Fox Sports Interactive Media, LLC. All rights reserved. Use of this website (including any and all parts and components) constitutes your acceptance of these Terms of Use and Updated Privacy Policy. Advertising Choices. Do Not Sell my Personal Info