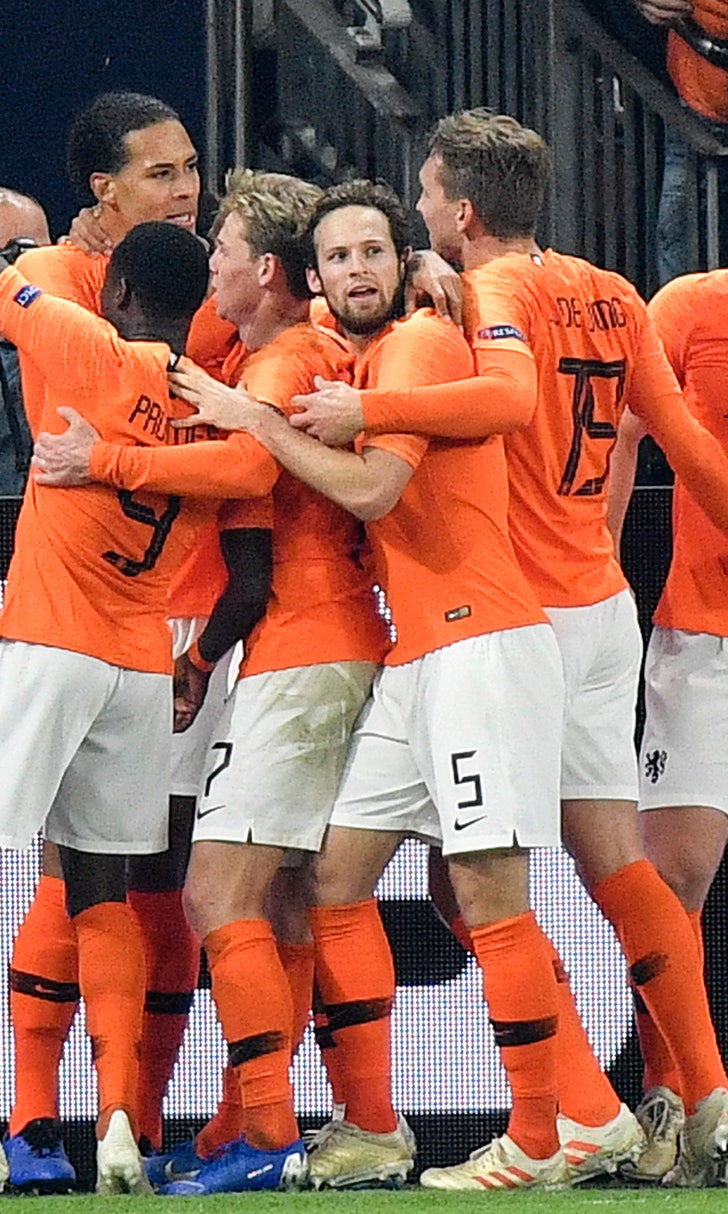 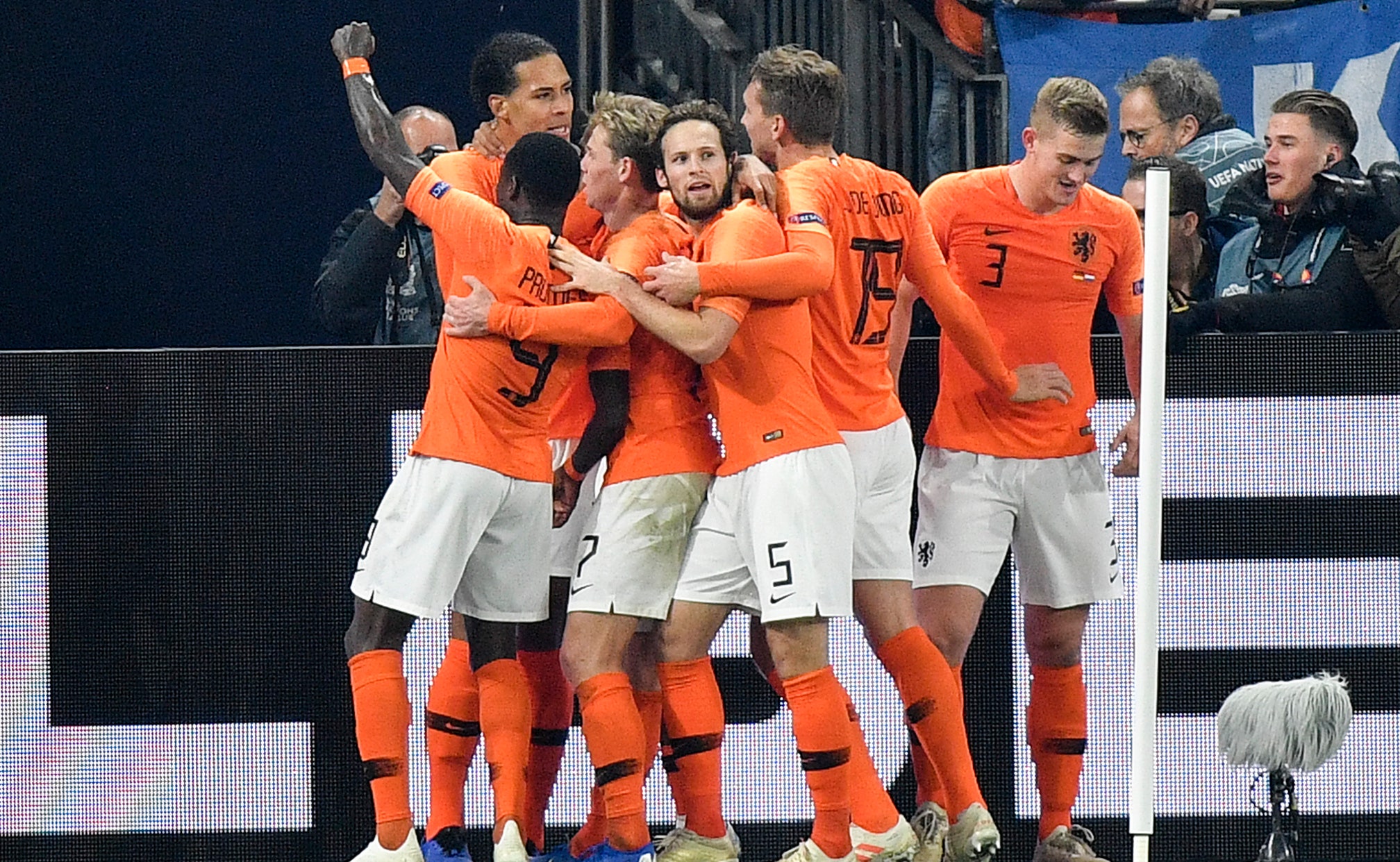 The Netherlands' recovery from one of the lowest ebbs in its history continued with a last-gasp qualification for the Final Four of the inaugural UEFA Nations League on Monday.

Virgil van Dijk volleyed home a 90th-minute equalizer to seal a dramatic Dutch comeback in a 2-2 draw in Germany, allowing Ronald Koeman's rejuvenated side to top its qualifying group on goal difference ahead of France, and join fellow group winners Portugal, England and Switzerland in a five-day finals competition in June.

So instead of seeing Kylian Mbappe, France's new wonderkid and star of the team's World Cup triumph in Russia in July, vying for another piece of international silverware, soccer fans will get to see if the Netherlands truly has turned the corner.

The slump of the Dutch has been profound since they finished third at the World Cup in Brazil in 2014. They failed to qualify for an enlarged European Championship in 2016 and also didn't make it to the World Cup this year.

Three coaches — Guus Hiddink, Danny Blind, and Dick Advocaat — came and went. And with Dutch soccer at club level also in strife, debate swirled as to how one of the long-time heavyweights of the world game could recover.

Under Koeman, though, the future of the Oranje looks bright. Youngsters like center midfielder Frenkie de Jong and center back Matthijs de Ligt are regarded as two of the most promising players in the world; Memphis Depay and Georginio Wijnaldum have returned to their best form over the last 18 months; and, in Van Dijk, the Netherlands has one of the best defenders around.

A rock for Liverpool this season and last, Van Dijk — soccer's most expensive defender following his $99 million move from Southampton in January — sidefooted in a cross from the left to follow up an 84th-minute goal from Quincy Promes that gave the Dutch a glimmer of hope in Gelsenkirchen.

The Germans had gone 2-0 up after 19 minutes thanks to Timo Werner's dipping shot from 25 meters and Leroy Sane's deflected effort from just inside the area. They couldn't hold on, though, and finished group play with no wins, just two points, and in something of a crisis.

They didn't get out of their group in Russia in a dismal defense of their World Cup title, while relegation to League B of the Nations League — featuring Europe's second-tier teams — had already been confirmed after failing to win any of their first three group games.

Germany coach Joachim Loew opted to stay in the job after the World Cup, but is now under mounting pressure.

The Nations League, a new competition devised by UEFA to replace unpopular international friendlies with competitive matches between teams of a similar level, appears to have won over the skeptics, and the lineup for the Final Four is intriguing if hardly a marketer's dream.

Portugal, which will be playing on home soil, has a superstar in Cristiano Ronaldo who should be back in the team after an extended absence from international soccer since the World Cup.

England has Harry Kane, the top scorer at the World Cup, and a talented, dynamic group of young players under forward-thinking coach Gareth Southgate.

Switzerland, which hasn't reached a quarterfinal of an international tournament since 1954, will be the outsider.

The Netherlands, at No. 15, will be the lowest-ranked team in the competition but should not be discounted. This victory came three days after the team produced one of its best performances in years to beat France 2-0, while it beat Portugal 3-0 in March and Germany by the same score at home in the Nations League.

The draw for the Final Four, which comprises of two semifinals and then a third-place playoff and final, will take place in Dublin on Dec. 3.

Some other loose ends were tied up in the Nations League, which offers teams a second chance to qualify for the European Championship in 2020.

The 16 group winners in Leagues A, B, C and D — or the next best-placed teams who have not already qualified via the European qualifiers starting in March — will progress to the Nations League playoffs and compete for the last four qualifying places for Euro 2020.

Norway was promoted to the second-tier League B after finishing top of Group C3 with a 2-0 win at Cyprus. The Norwegians started the final round of group play tied for points with Bulgaria, which could only draw at home to Slovenia 1-1.

Macedonia went up to League C after beating Gibraltar 4-0 to top Group D4. Armenia, the only team that could have finished above Macedonia, ended up second after drawing at Liechtenstein 2-2.

Slovakia was relegated to League C after losing at neighbor Czech Republic 1-0, with Patrik Schick scoring the winner in the first half with a deft lob over the goalkeeper on a counterattack.

Denmark was already guaranteed promotion to the top tier and Ireland was sure of being relegated before they drew 0-0 in Aarhus.

Norway
share story
those were the latest stories
Want to see more?
View All Stories
Fox Sports™ and © 2020 Fox Media LLC and Fox Sports Interactive Media, LLC. All rights reserved. Use of this website (including any and all parts and components) constitutes your acceptance of these Terms of Use and Updated Privacy Policy. Advertising Choices. Do Not Sell my Personal Info