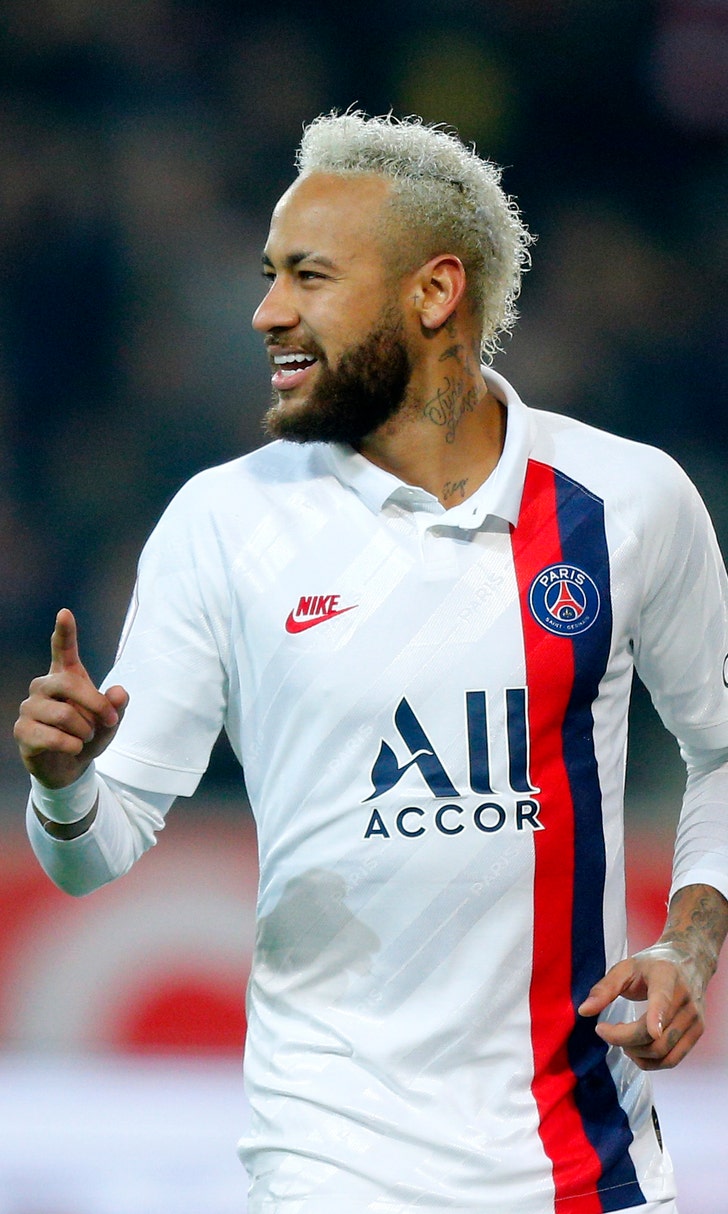 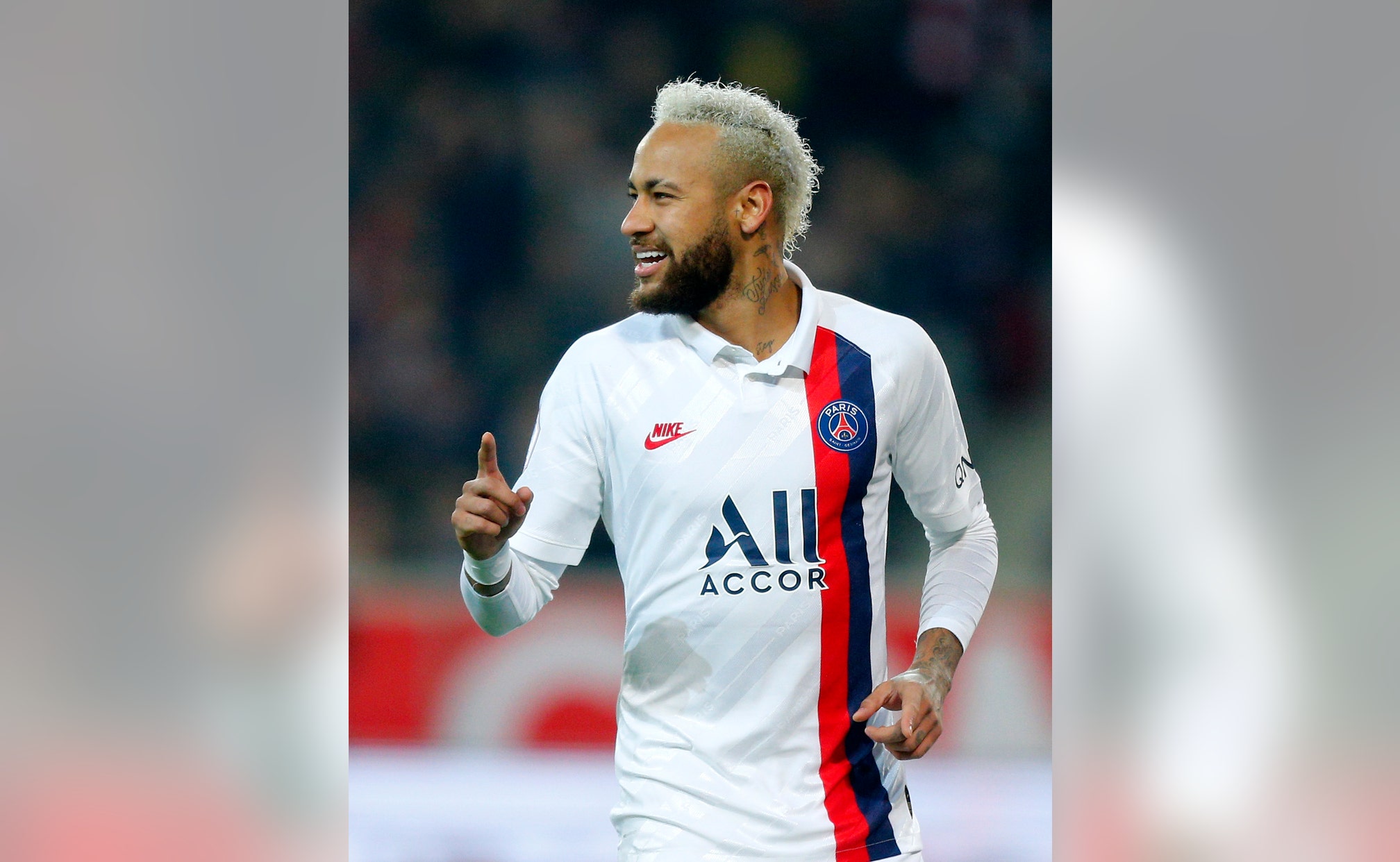 previous story
Coach on Bryant helicopter put "heart and soul" in teaching
next story
Gianna Bryant, 13, was going to carry on a basketball legacy

PARIS (AP) — After spending the whole summer pushing for a move away from Paris Saint-Germain, Neymar is now enthralled with the club that made him the world's record signing at 222 million euros ($245 million).

It has been a staggering turnaround. Only months ago, Neymar was persona non grata in the eyes of many PSG fans after trying his utmost to re-join Barcelona, which sold him for that enormous sum.

Neymar even missed the start of PSG's season in doing so. When he finally appeared on Sept. 14 he was given a nasty reception by a section of PSG fans incensed at his behavior. PSG's hardcore ultras, in particular, were merciless in their expletive-laced tirades against him in that game.

They felt betrayed that he wanted to leave and let him know. Even though he scored a late winner in that game with a stunning scissor-kick volley, they still jeered him as he celebrated in a low-key manner so as not to antagonize them.

Even though this was only a few months ago, it all seems to be consigned to history with a new page turned.

Neymar is back in favor at PSG, something that seemed unfathomable during the tense final days of the summer transfer window in August.

Now he is in fine form once more.

His first goal against Lille was a superb curling shot into the top right corner, the second a coolly-struck penalty. But what stood out above those goals and his undoubted artistry was his seemingly new-found attitude.

Whisper it quietly: Yes, Neymar is becoming a team player, and a hard-working one.

Gone, it would appear, are the attention-hogging histrionics of the 2018 World Cup in Russia. Back then, Neymar's constant tumbling and theatrical rolling on the ground drew the ire of opposing teams, fans from around the globe on social networks, and even exasperated Brazil fans.

These days Neymar is a player transformed. He rides tackles, even if they're hard or unfair, such as an awful lunge on his ankle from Lille midfielder Benjamin André. And he even tracks back to help his teammates defend.

His work ethic has increased considerably and, so far, it has not impeded his impact in attack.

“I’m very happy to help the team play in this way, to score goals and to provide assists,” Neymar said through a translator after the Lille game. “I know what I need to do on the field.”

Neymar is developing his passing range and link play, too.

He has formed a fine understanding with silky midfielder Marco Verratti, who seems to read his elusive runs as telepathically as Neymar senses his astute passes, and with France's World Cup-winning star Kylian Mbappé.

Neymar, who turns 28 on Feb. 5, is approaching his peak years as a player.

Now, after two injury-hit seasons where he twice broke his foot and where he arguably didn't help himself at times with his attitude, he seems to be hitting his stride at last.

“I’m playing at 100% and dedicated to PSG this season. I think we will do great things,” he said. “I think I am in my best form of the season. I’m feeling good.”

That's welcome news for PSG, which has failed to reach the quarterfinals of the Champions League for the past three seasons and has only once reached the semifinals back in 1995.

Garcia's Welterweight Mt. Rushmore
Before he does battle with Errol Spence Jr. on Saturday, Danny Garcia lays out his four favorite fighters of all-time.
2 hours ago

The Katz Tiers: What An Opening Week
Talk about a crazy start to the college hoops season. Check out Andy Katz's favorite contenders exiting the first week.
3 hours ago

Ohio State's Championship Conundrum
The Buckeyes could miss the Big Ten title game through no fault of their own. Urban Meyer offers one thing to keep in mind.
4 hours ago

Errol Spence Jr.'s Improbable Return
A terrifying car accident nearly cost his life. Now, he's defending two titles. Martin Rogers tells Spence Jr.'s incredible story.
4 hours ago
those were the latest stories
Want to see more?
View All Stories
Fox Sports™ and © 2020 Fox Media LLC and Fox Sports Interactive Media, LLC. All rights reserved. Use of this website (including any and all parts and components) constitutes your acceptance of these Terms of Use and Updated Privacy Policy. Advertising Choices. Do Not Sell my Personal Info