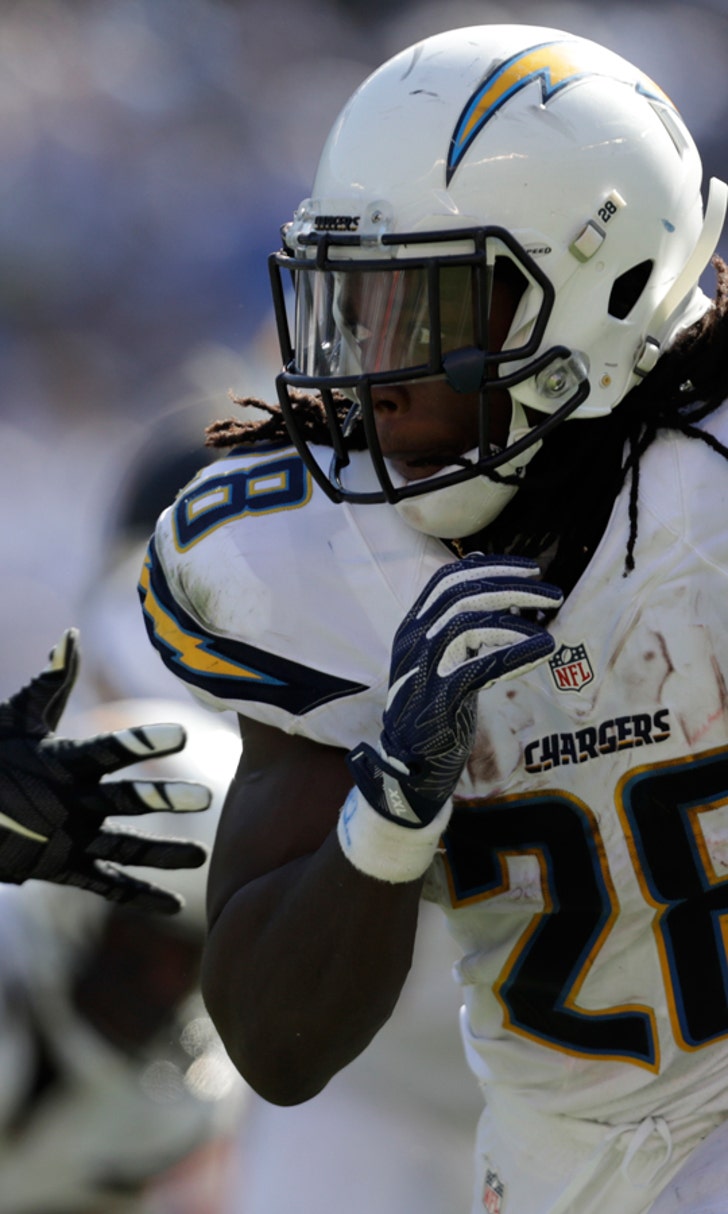 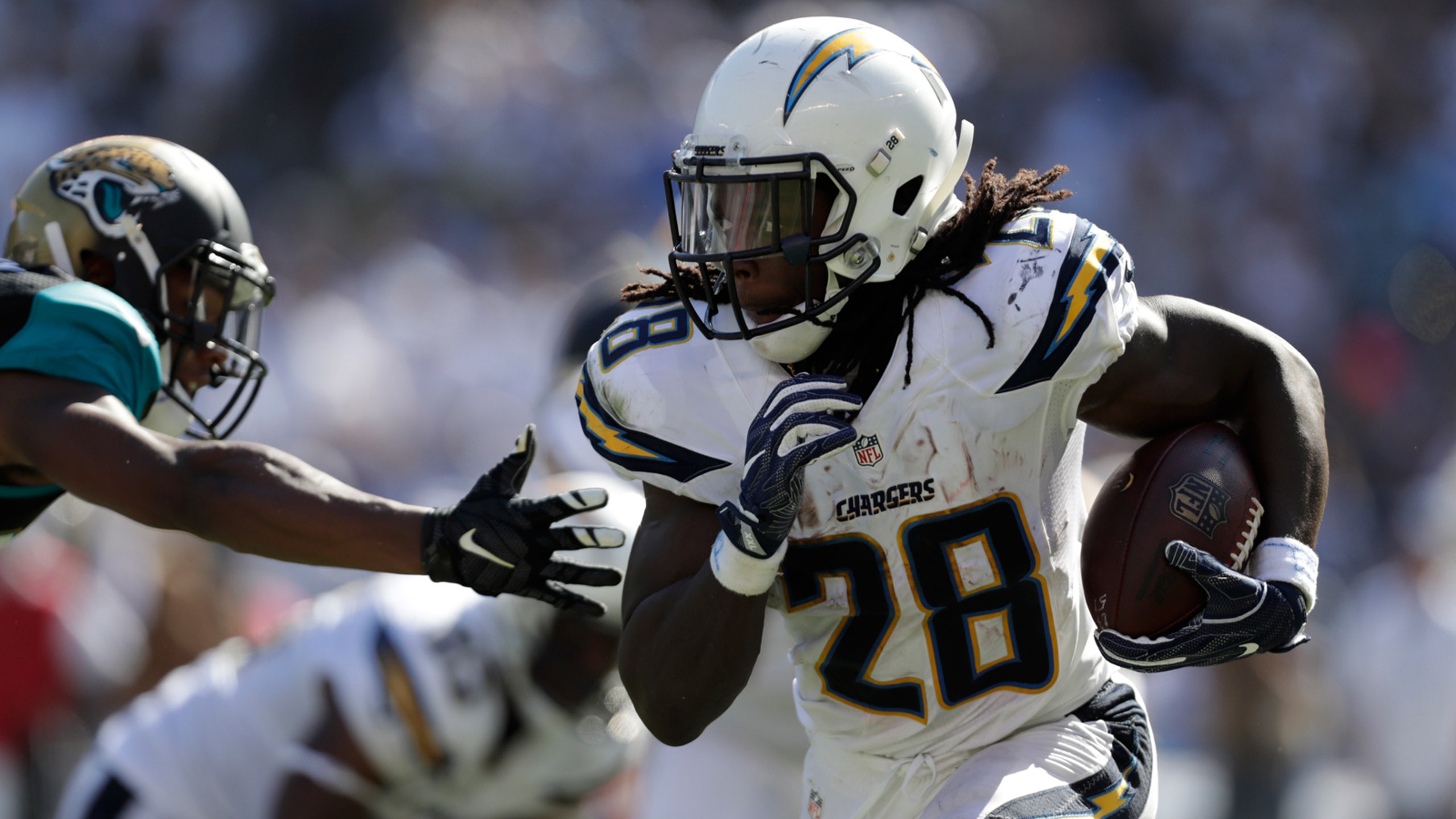 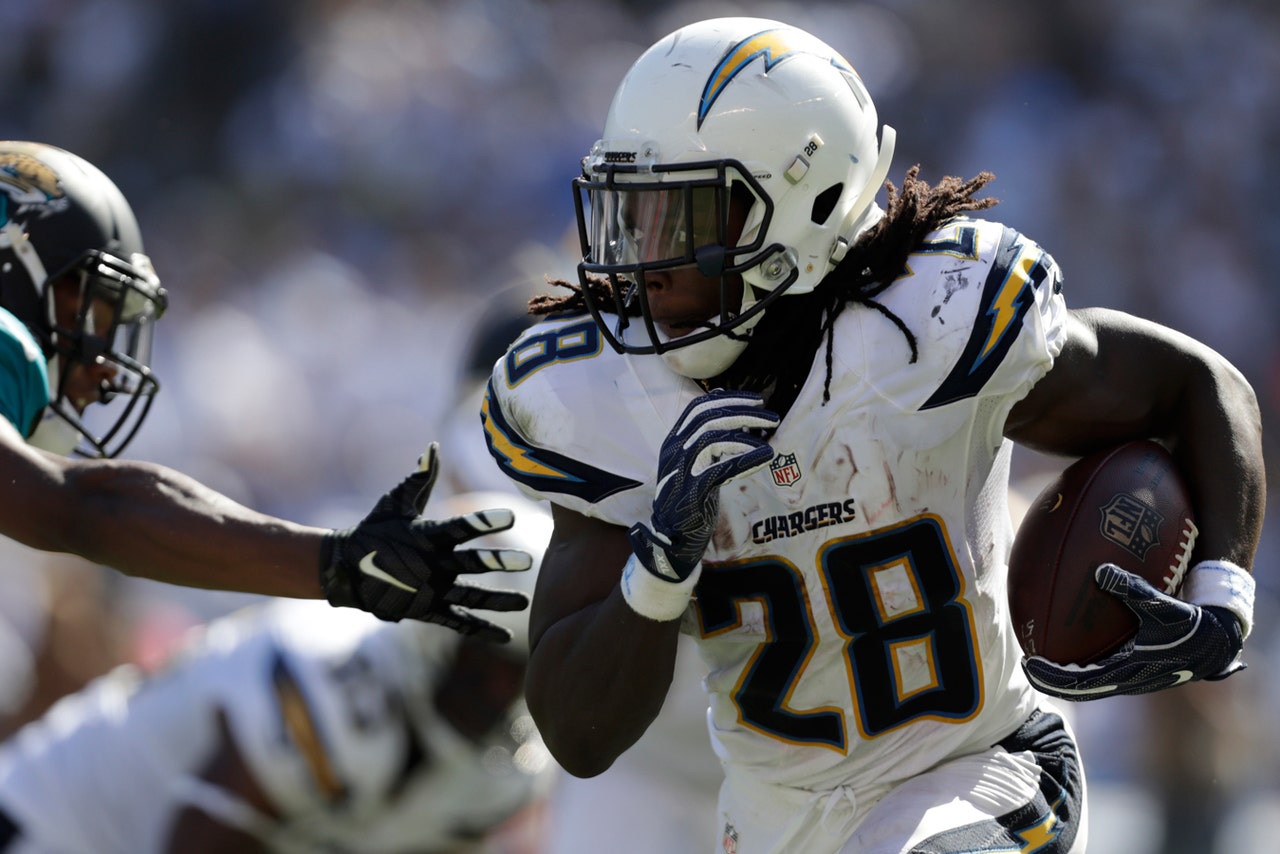 SAN DIEGO (AP) -- Philip Rivers couldn't help but saying it in the locker room at halftime.

Unlike a week earlier, the San Diego Chargers didn't turn a three-touchdown lead into a soul-crushing loss. They added on, beating the mistake-prone Jacksonville Jaguars 38-14 Sunday.

Rivers matched his career high with four touchdown passes, including two to Travis Benjamin, and Melvin Gordon ran for one score and had his first 100-yard game

The Chargers (1-1) bounced back from their stunning loss at Kansas City, when they blew a 21-point third-quarter lead and fell 33-27 in overtime.

The Jaguars started 0-2 for the fourth time in five seasons. They crossed midfield only six times and committed three turnovers.

"I think we kind of took ourselves out of rhythm by doing stupid stuff, the turnovers and the penalties," Blake Bortles said.

Casey Hayward led the Chargers' defense with two interceptions of Bortles. His first set up a short drive Rivers capped with a 12-yard touchdown pass to Benjamin for a 14-0 lead on the first play of the second quarter.

Rivers threw a 2-yard scoring pass to tight end Antonio Gates for a 21-0 lead midway through the second period. That drive started after a missed 54-yard field goal by Jacksonville's Jason Myers, who went to Mater Dei High in suburban Chula Vista.

His third scoring pass went 44 yards to Tyrell Williams, who bounced off two defenders and broke two tackles just before going into the end zone in the third quarter.

Benjamin, signed as a free agent from Cleveland, caught a 45-yarder late in the third quarter.

Bortles threw TD passes of 4 yards to Marcedes Lewis and 15 to Corey Grant in the fourth quarter.

The Chargers lost a playmaker for the second straight week. Running back Danny Woodhead was helped off the field in the first quarter and taken to the locker room on a cart. The severity of the knee injury wasn't immediately known.

What could be the Chargers final home opener in San Diego drew only 52,165 fans at 72,000-seat Qualcomm Stadium.

The Jags were coming off a four-point loss to Green Bay.

"I don't know if you're defined by one game," coach Gus Bradley said. "I think the big thing is to see how we'll respond from this."

HUNGRY GORDON: Gordon, a second-year pro, scored on a 3-yard run on the game's opening drive, his first TD at Qualcomm Stadium. Gordon went in standing up, and then right guard D.J. Fluker lifted him off the ground in celebration. He finished with 102 yards on 24 carries.

"It feels good," Gordon said. "I don't get overly excited about anything. It's early. I'm just hungry, man. But I am happy now. I definitely wanted it, so it's even better you get the 100-yard game with a win."

Gordon failed to score a TD during his rookie season, then scored twice at Kansas City.

"It's just a solidarity thing," Barksdale said. "Chris has two kids, I have a daughter on the way. You never want to bury your kids. We still stand for the national anthem, we're happy to be in the country. At the same time, things need to change."

There was also a malfunction with a giant American flag as it was being unfurled on the field by Marines and U.S. Navy sailors. The flag appeared to have a big twist in the middle and couldn't be fully opened.

A SAN DIEGO INSTITUTION: Rivers and Gates have hooked up on 78 touchdown passes, the most in NFL history for a quarterback-tight end tandem. Gates has caught 80 TD passes since Rivers became the starter in 2006, but two were thrown by LaDainian Tomlinson on halfback option plays. Gates needs six more scoring catches to match Tony Gonzalez's all-time mark of 111 for a tight end.

WEST COAST WOES: The Jaguars fell to 2-11 on the West Coast and 0-4 in San Diego. The Jags haven't won on the West Coast since 2004 and have been outscored 260-93 during an eight-game losing streak, falling by double digits in seven of those.

Jaguars: LT Kelvin Beachum was taken to a hospital after sustaining a concussion late the third quarter. The stadium was hushed as he was placed on a back board and lifted onto a cart. The team said he was to be kept overnight for observation, returning to Jacksonville Monday. ... Jared Odrick hurt an elbow on the opening drive and returned. ...WR Arrelious Benn sustained a cut on Jacksonville's first possession. The team didn't give further information. ... DT Roy Miller hurt his left hand.

Chargers: In addition to Woodhead, SS Jahleel Addae left with an apparent shoulder injury in the fourth period.

Los Angeles Chargers
share story
those were the latest stories
Want to see more?
View All Stories
Fox Sports™ and © 2021 Fox Media LLC and Fox Sports Interactive Media, LLC. All rights reserved. Use of this website (including any and all parts and components) constitutes your acceptance of these Terms of Use and Updated Privacy Policy. Advertising Choices. Do Not Sell my Personal Info