Packers square off against Seahawks with playoff positioning on line

SEATTLE — Aaron Rodgers and Russell Wilson have faced off in a few memorable games in Seattle, from the "Fail Mary" to an unforgettable NFC championship game that sent the Seahawks to their second straight Super Bowl.

For the fifth straight regular season — and the seventh time overall since 2012 — Green Bay and Seattle will meet again on Thursday night, but this time it's positioning in a jumbled NFC playoff picture at stake.

Washington, New Orleans, Chicago and the Los Angeles Rams are the division leaders in the NFC, leaving a pile of seven teams — including Seattle and Green Bay — within a couple of games of each other likely competing for the two wild-card spots. And every advantage or tiebreaker in that race — such as a head-to-head victory — could end up being crucial.

"I know that this team is very, very capable of doing what we're setting out to do," Wilson said. "I think everybody should watch out (for) what we can do."

Seattle (4-5) has dropped two straight after winning four of the previous five, and hasn't lost three straight since the middle of the 2011 season. Green Bay (4-4-1) snapped a two-game losing streak with a 31-12 thumping of Miami last week.

The "Fail Mary" in 2012, the 2014 season opener when Seattle raised its Super Bowl banner and the NFC title game after the 2014 season are the only three times Rodgers has lost to the Seahawks in his career.

He also has the distinction of having won in Seattle — although that came 10 years ago.

"It's a tough environment like I said but we've definitely done it before," Rodgers said. "You've just got to start fast, take care of the football. They're very good at turning the ball over. I know this is different personnel on their side of the ball than we've seen over the years, but they're still playing really well."

Rodgers and Wilson are being helped this year by improved run games that are among the best in the league. Green Bay's Aaron Jones leads the NFL in yards per carry, while Seattle has the No. 1 rushing offense and last week rushed for 273 yards against the Rams without starting running back Chris Carson.

Here's what else to watch for on Thursday night:

Seattle expects Carson to be available after missing last Sunday's game with a hip injury. If Carson can go, he will be the starter. But Seattle finally saw the promise of rookie first-round pick Rashaad Penny last week when he rushed for 108 yards on 12 carries and a touchdown. Penny showed the burst and big-play ability that had been missing through the first half of the season.

Expect Penny to get additional chances no matter Carson's health as the Seahawks look to use its three-back trio — Carson, Penny, Mike Davis — all of whom have 100-yard rushing games this season.

Another week, another lineup shuffle likely in the Green Bay secondary. Kentrell Brice was walking in the locker room with a boot on his left foot early in the week, making it appear unlikely that he will be ready to go on a short turnaround.

Tight end Jimmy Graham is returning to Seattle for the first time since signing with the Packers as a free agent in the offseason. With just two touchdowns so far this year, Graham perhaps hasn't had quite the impact in the end zone as in 2017, when he had 10 scores with Seattle.

But with 33 catches through nine games, Graham in on pace to match the production he had with the Seahawks. He's also taking pride in his run-blocking, and his part in helping Aaron Jones run for career highs of 145 yards and two scores last week.

"I know everybody knows me for running go routes and snagging touchdowns, but I think I've dedicated myself to the run, to being a part of that because I'm a tight end now," Graham said on Sunday. "For us to be successful I've got to do those things and I've got to be good at them."

Because of the quick turnaround from last Sunday several players have been ruled out. Along with Brice and King, the Packers have also ruled out wide receiver Randall Cobb and linebacker Nick Perry.

Seattle linebacker K.J. Wright was listed as doubtful because of a knee injury that knocked him out of last Sunday's game early. Carroll said Wright would be a game-time decision. Seattle sat Carson and guard D.J. Fluker against the Rams and both appear set to play against the Packers.

STREAKS, STATS AND NOTES — Fifth straight year teams are meeting in regular season, but first in Seattle since Week 1 of 2014. ... Packers have won last three. ... Packers have scored 23 or more points in seven of past eight November road games. ... Packers have rushed for 95 or more yards in eight straight games, current longest streak in league. ... Green Bay leads NFL averaging 5.17 yards per carry. ... QB Aaron Rodgers has 10 TDs and two interceptions in seven career starts vs. Seattle. ... Rodgers has not thrown interception in past four road games. .. RB Aaron Jones leads NFL averaging 6.7 yards per rush. ... Jones rushed for career-high 145 yards last week vs. Miami. ... WR Davante Adams had two TD catches last week. He has TD in 12 of past 14 road games. Adams tied for second in NFL with nine TD catches. ... TE Jimmy Graham had 170 catches and 18 touchdowns in 43 career games during three seasons with Seahawks. ... Packers are tied for league lead with 31 sacks. DL Kenny Clark and LB Kyler Fackrell lead team with five sacks each. ... Packers have been outscored 134-97 in first half this season. ... Seahawks have won five straight Thursday night games and are 7-1 overall under Pete Carroll. ... Seahawks 14-2 in prime-time games at home since 2010. They have not lost three straight overall since early in 2011 season. ... QB Russell Wilson has 14 TDs and two interceptions in past five games. Wilson has not thrown for 300 yards this season but rushed for season-high 92 yards last week vs. Rams. ... Seahawks lead NFL in rushing, averaging 152.2 yards per game. ... Seahawks rushed for 273 yards vs. Rams, most since 2014 vs. Giants. ... Rookie RB Rashaad Penny rushed for career-high 108 yards last week vs. Rams. ... WR Tyler Lockett already has career-high seven TD catches. ... TE Nick Vannett has TD catches in consecutive games. ... Seahawks allowing 6.9 yards per carry in past two games. ... DE Frank Clark has five sacks, two forced fumbles and fumble recovery in past four outings. ... LB Bobby Wagner has had 13 tackles in consecutive games. ... Seahawks fourth in league with plus-8 turnover margin, but have not forced turnover in past two games. ... Fantasy tip: Rodgers likes playing on short week. In his past two Thursday night games, Rodgers has thrown seven touchdown passes and no interceptions.

Colin Cowherd's Blazin' 5 – Week 2
Colin Cowherd is back with his second Blazin' 5 of the NFL season, and he's looking to cash in on America's Team.
10 hours ago 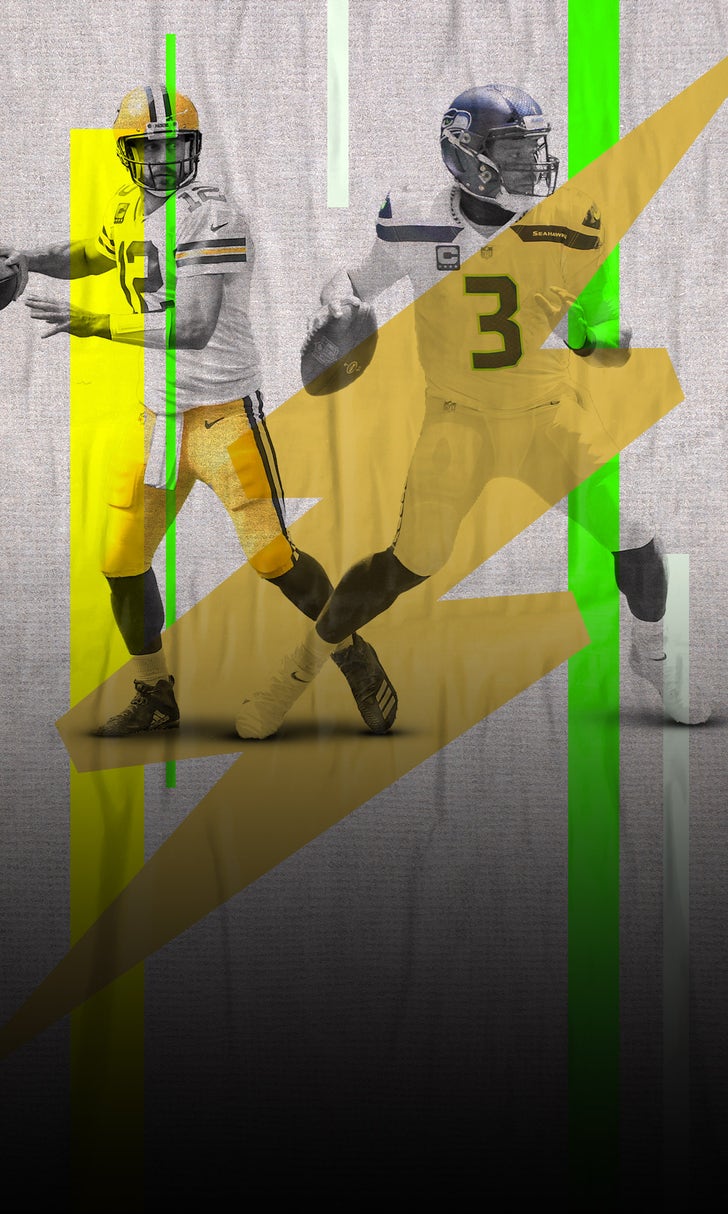 Veteran Presence
Lamar Jackson and Patrick Mahomes are the MVP favorites. But Russell Wilson and Aaron Rodgers won't be ruled out just yet.
4 days ago