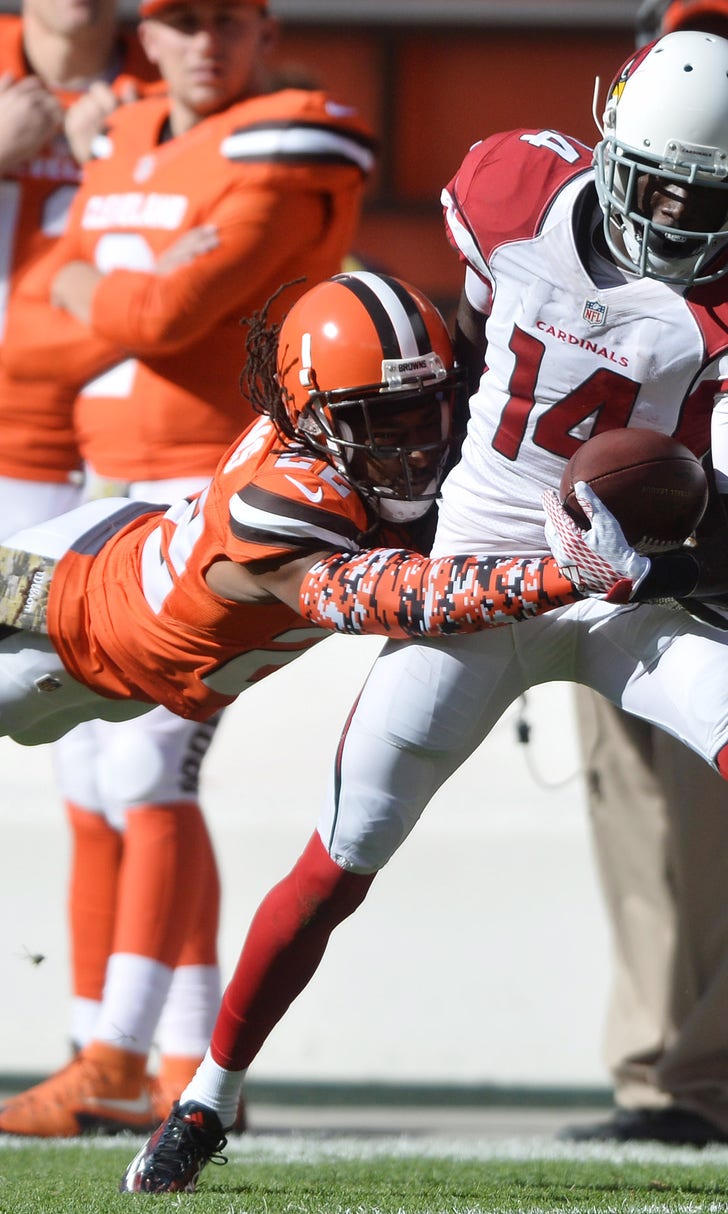 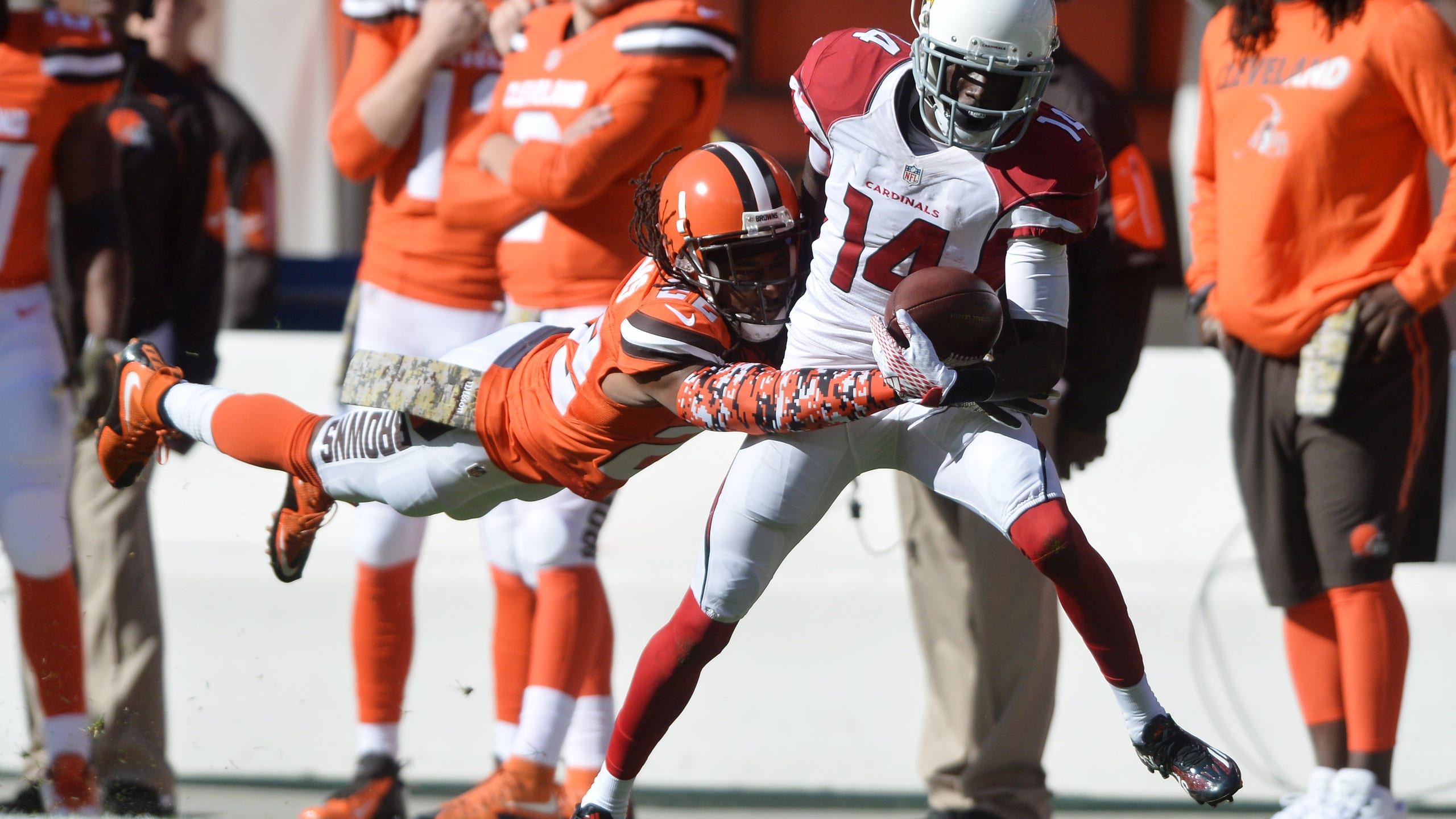 Injuries hit the Browns hard against the Cardinals 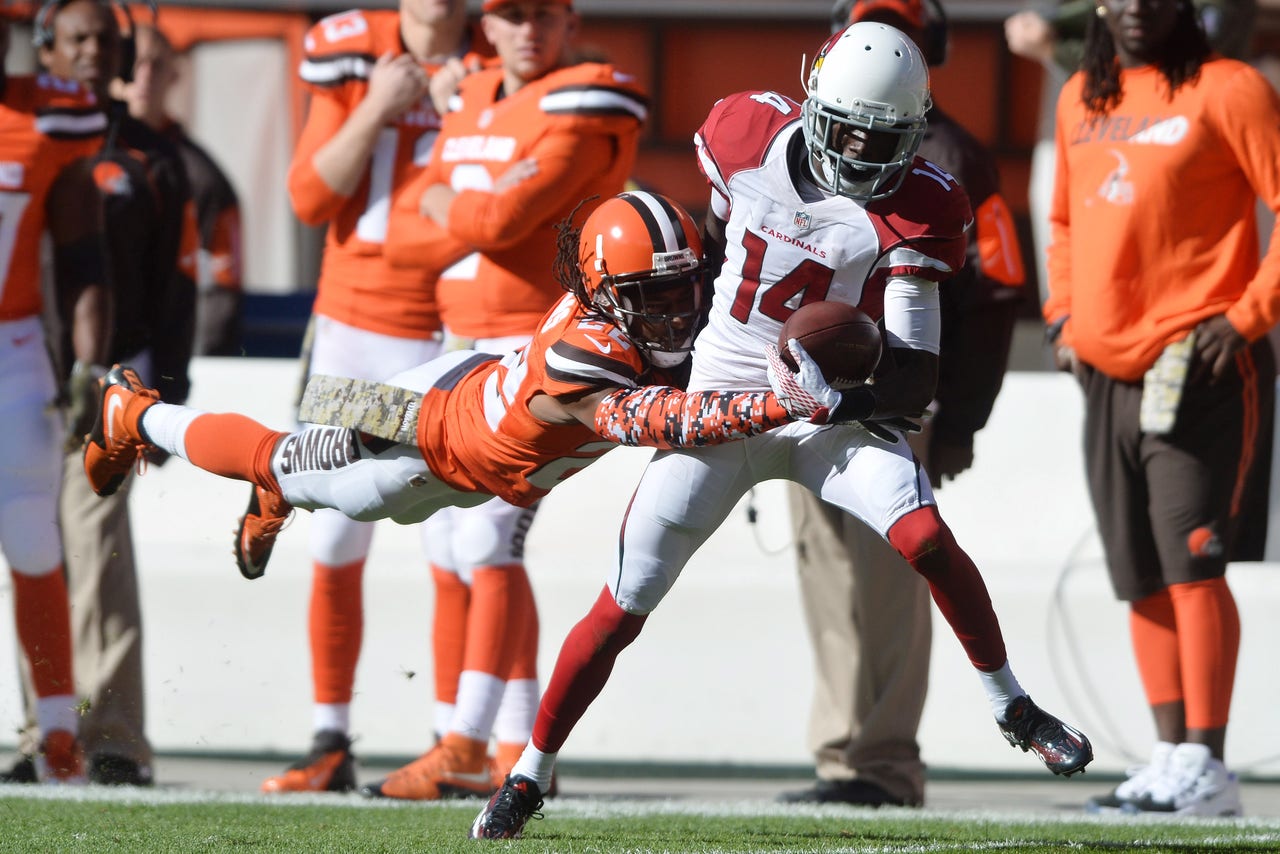 At halftime, Arizona's coach took direct aim at his Cardinals.

"He hits you right in the face with it," quarterback Carson Palmer said. "If you're not doing a good job, you'll be hearing about it. We heard a lot about it at halftime."

After a candid, quick-to-the-point tongue lashing from Arians, Palmer threw three touchdown passes in the second half and the Cardinals outscored the Browns 24-0 in the final 30 minutes and rolled to a 34-20 win Sunday.

Chris Johnson had 30 carries for 109 yards and Michael Floyd and Larry Fitzgerald had TD catches for the Cardinals (6-2), who certainly didn't look like one of the NFL's most balanced teams in the first half.

Down 20-10 at the break thanks to turnovers and sloppiness, the Cardinals were challenged by Arians, who didn't sugarcoat his words during the break.

"He said, `We're either pretenders or contenders. And it's up to you to show who you are in the second half,'" Fitzgerald said. "When coach challenges you like that, we had to come out and respond."

Palmer finished with 374 yards passing, throwing TDs on the first two possessions of the third quarter as the Cardinals turned a 10-point deficit into a 24-20 lead in just over seven minutes. His third TD after halftime, a 6-yarder to Fitzgerald, gave Arizona a 31-20 lead.

Arians joked that his halftime message didn't include any physical feats.

"I used to throw (stuff), but I can't lift it anymore," Arians said. "Even the chairs are heavy."

Troy Niklas had two short TD receptions as the Cardinals overcame four turnovers and won in Cleveland for the first time since 1985.

It couldn't have been much worse for the Browns (2-6), who dropped their third straight and lost cornerback Joe Haden and safety Donte Whitner to concussions on consecutive plays in the third quarter.

Also, quarterback Josh McCown was roughed up again after throwing three first-half TD passes. The 36-year-old, who missed practice during the week with injuries, took several hard hits and got X-rays on his ribs following the game.

McCown somehow stayed on the field, but may have a tougher time getting ready for Thursday night's game in Cincinnati -- a date with the unbeaten Bengals.

"It's a short week," said McCown, who waved off backup Johnny Manziel in the third quarter. "We'll see how it goes. I can't predict the future, but unless anything changes, in my mind as long as I can wake up the next few days and do everything I feel like I need to do to feel effective, than I will be ready."

Here are five other takeaways as the Cardinals improved to 21-5 outside the NFC West under Arians:

GIVE AND TAKE: The Cardinals had four turnovers -- three fumbles and an interception -- but Arizona's defense stripped McCown once and recorded one interception.

TOUGH TEXAN: McCown continues to impress teammates with his pain tolerance. The 36-year-old has taken a beating in recent weeks, but refuses to leave the field.

"He's super tough," Browns Pro Bowl tackle Joe Thomas said. "It's really impressive for a guy that's in his mid-30s. I know I'm on the other side of 30 now and when I get hit it hurts. For a smaller guy than myself to get hit by bigger guys, that's got to hurt. But he's super tough."

REBORN RUNNER: Johnson was considering retirement when he was signed to a one-year contract in August by the Cardinals. Now, it's hard to imagine where they'd be without him.

The 30-year-old has 676 yards rushing and has given Arizona another offensive weapon to go with their talented group of wide receivers. The team signed Johnson to back up Andre Ellington, who suffered a sprained knee in the opener.

TRADE TALKS: With Tuesday's trading deadline approaching, there are rumblings the Browns are willing to deal several prominent players, including Thomas, center Alex Mack and linebacker Paul Kruger, who received text messages before Sunday's game informing him his name is being floated around.

He signed a five-year, $40.5 million free agent contract with Cleveland in 2013 and said he would like to remain with the Browns. Kruger's production has dropped -- he has one-half sack after getting 11 last season -- and his playing time has been reduced because coordinator Jim O'Neil isn't using him in certain packages.