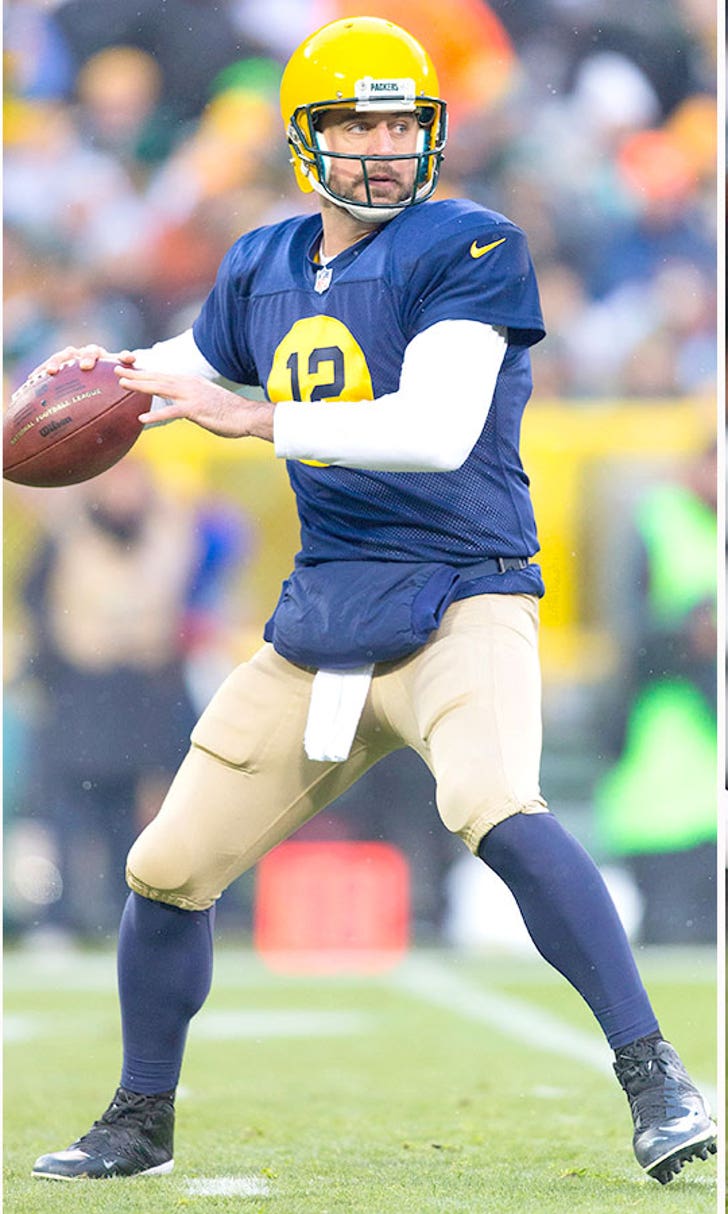 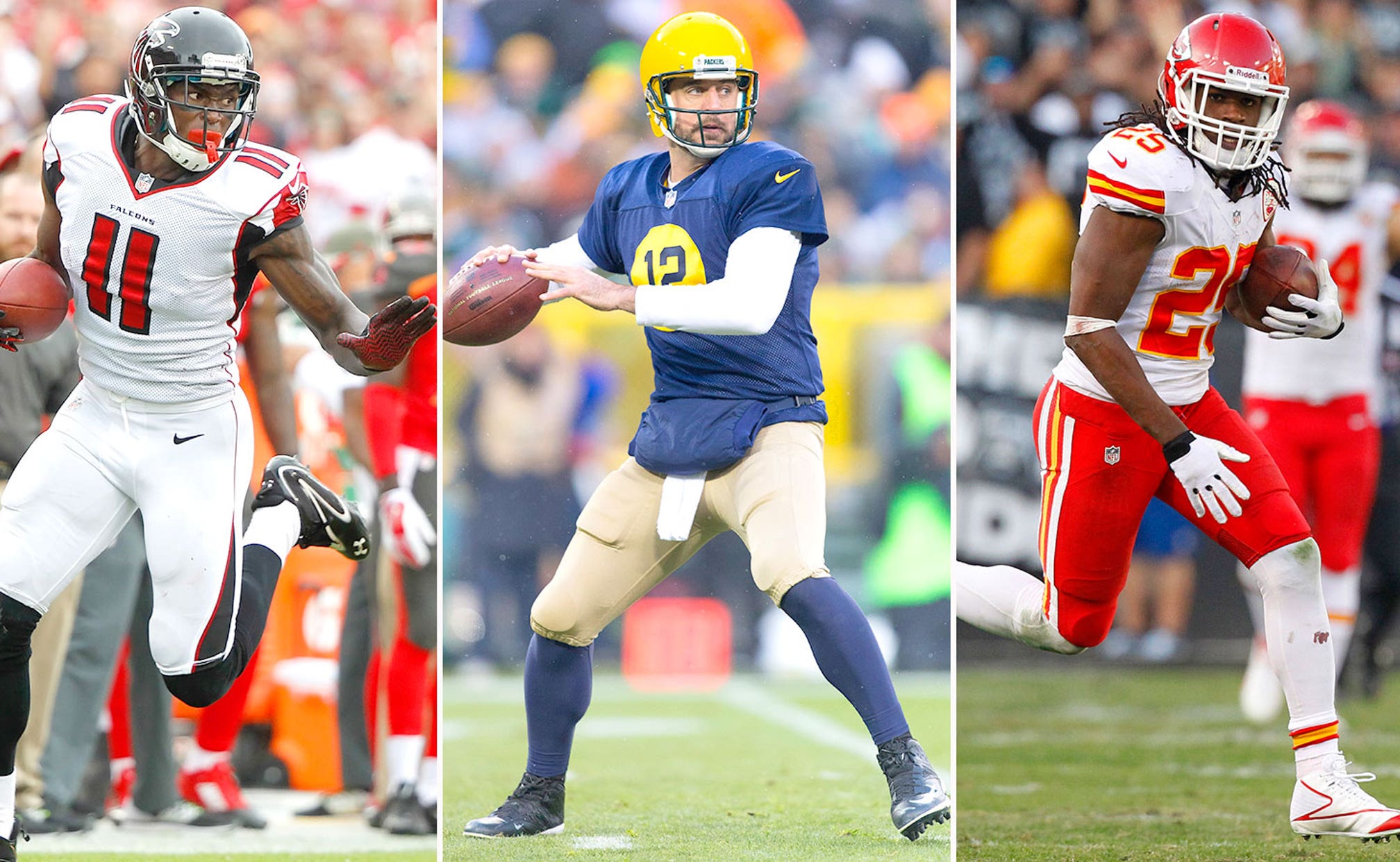 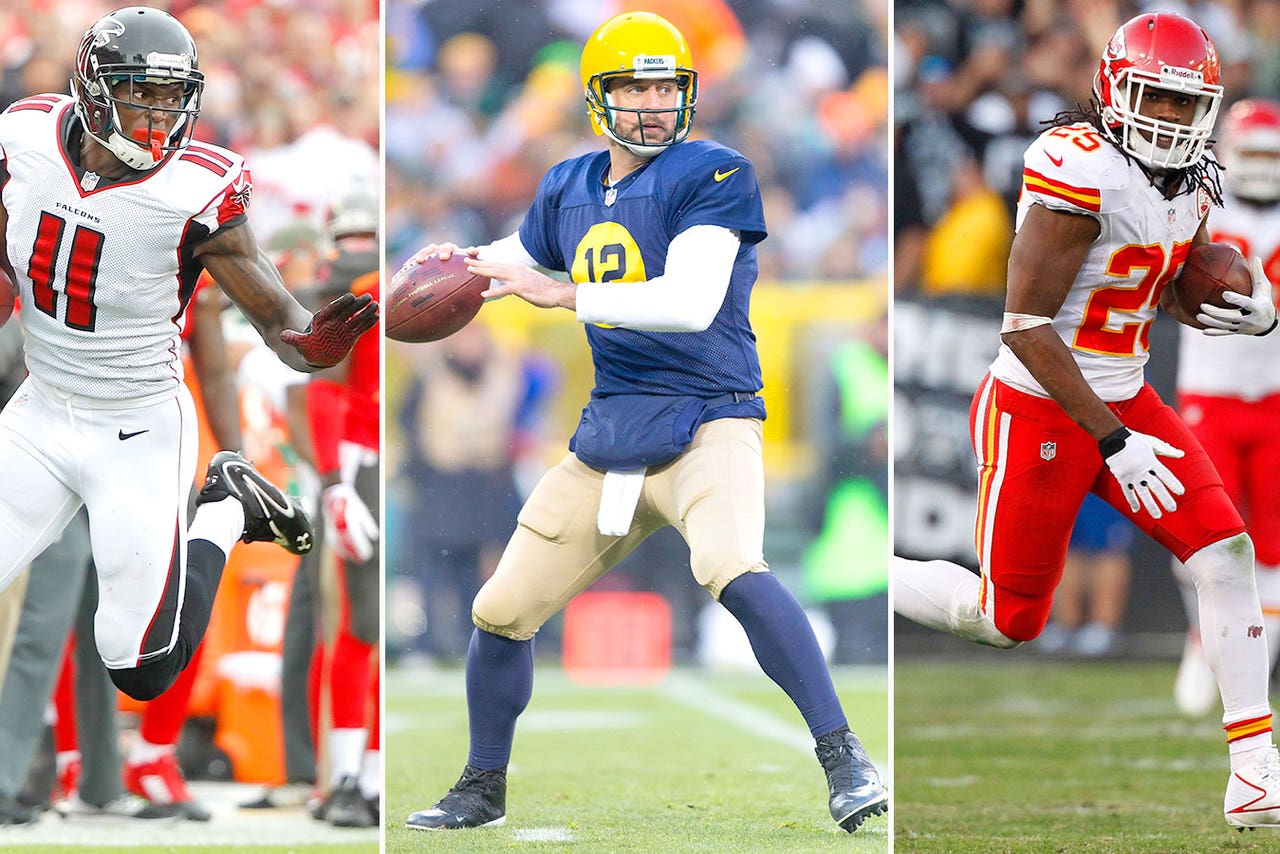 FOX Sports South takes a whimsical and diverse look at 15 star-driven factoids for NFL Week 12 -- a piece that might help shape fantasy-league decisions and/or inspire more real-world and barstool debates, among friends and kind strangers:

1. Let's start with a mind-blowing factoid that's only relevant because the Vikings have a two-year temporary home at TCF Bank Stadium -- an outdoors venue on the campus of the University of Minnesota:

In Aaron Rodgers' illustrious career, the Packers quarterback and MVP candidate has started only one cold-weather ROAD game during the month of November -- Week 12 of the 2012 season against the Giants.

On that blustery day at MetLife Stadium, Rodgers accounted for only 219 yards passing and one touchdown, which undoubtedly played a role in the Packers' 38-10 blowout loss.

2. It's certainly wise to include Jamaal Charles among the top-10 tailbacks for this week, given his 215-yard, five-TD ravaging of the Raiders last December. (In case you forgot, 185 yards came on the receiving end.)

On the flip side, it's also not wise to bet the proverbial house that Charles (eight TDs in his last five games) will live up to that elite-level fantasy promise.

Check this out: Of his last nine outings against the Raiders, Charles curiously has five games of 100-plus total yards (with nine total TDs) ... and four clunkers of 30 or fewer total yards (with zero touchdowns).

That's quite a discrepancy. Almost eerie for a superstar.

The only downside the above proclamation: The Dolphins haven't surrendered a 300-yard passing day to a single quarterback all season.

4. Of his last 10 games against NFC foes -- including his 354-yard, five-TD decimation of the Bears in Week 8 -- Patriots QB Tom Brady holds rock-solid averages of 305 yards passing/2.1 touchdowns per outing.

On a more recent note, the Hall of Fame shoo-in has averaged 313 yards passing and 3.6 TDs since Week 6.

One last note: Since the NFL-AFL merger (1970), the Patriots have only lost to the Lions (this week's opponent) once in the month of November (2000).

The significance of that occurrence: It was Brady's NFL debut (1 of 3 for 6 yards in relief of Drew Bledsoe).

In fact, when hearing that factoid, it's stunning that Forte (10,893 career yards from scrimmage, 53 TDs) has never posted a season of 2,000 total yards.

But that'll change in, oh, about four weeks.

6. The Philadelphia Eagles have never defeated the Titans franchise (formerly the Houston Oilers) since they relocated to Tennessee in the mid-1990s (0-4 in that span).

But that quirky stat only tells half the story here.

The Eagles, in turn, were a perfect 6-0 against the Oilers during their time in Houston (1960-1995) -- including back-to-back victories on Monday Night Football in the 1990s ... when the anemic Oilers tallied just six points both times.

Incidentally, Jones (67 catches, 912 yards, 3 TDs in 2014) hasn't found the end zone in his last seven games -- the longest touchdown drought of his career.

8. Jets QB Michael Vick, the permanent-for-now starter in New York, has failed to pass for 200-plus yards in four straight starts ... and that doesn't even include Vick's extended relief role from Week 8 -- when he tossed 36 balls (completing just 18) for 153 yards and zero TDs against the Bills (this week's foe).

Also, Vick has started only one career game at Buffalo's outdoors stadium, and that came in September 2005 (temperature at kickoff: 77 balmy degrees).

9. Only time will tell if Bucs wideout Mike Evans can break the 100-yard threshold for a fourth consecutive week (against the Browns).

Of his last six games, the rookie boasts stellar averages of 109 yards passing and 1.2 touchdowns -- including last week's 209-yard, two-TD demolition of the wretched Redskins.

Which brings us to this: The NFL hasn't produced a ton of prodigious rookie receivers over the last 25 years ... unless you count Randy Moss's 18-touchdown campaign of 1998 (17 receiving TDs, one punt-return score during the regular season).

In fact, check this out: Of Moss's final nine outings of '98 (including the playoffs), he averaged 5.2 catches/96 yards/1.44 TDs for that span ... and found the end zone at least once every time.

10. Colts QB Andrew Luck, who has accounted for 27 touchdowns in his last nine games, has amassed either 300 yards passing or three TDs in eight of his previous 11 home outings (including the playoffs).

It's worth noting, though: For the 2013-14 seasons, Luck passed for only 16 touchdowns in 12 total outings against AFC South foes -- a pedestrian 1.3 TD passes per game.

11. It's impossible to know if Browns wideout Josh Gordon -- the NFL's receiving-yardage king last year -- will have his proverbial sea legs under him on Sunday, upon returning from a lengthy suspension (drug-related).

However, he couldn't have picked a better opponent to mark the occasion.

That bodes well for an athletic freak (Gordon) who collected six touchdowns, seven outings of double-digit targets and back-to- back 200-yard efforts in his final seven games last season.

In three career outings against the Texans (including the playoffs), Bengals QB Andy Dalton has notched a grand total of one touchdown pass. In that span, he has averaged 191 yards passing (meh).

On the flip side ... Houston currently ranks as the NFL's 31st-ranked pass defense, surrendering 278 yards per game. In fact, since Week 5, spanning six outings, the Texans have allowed 290-plus passing yards five times.

13. Cowboys tailback DeMarco Murray, the NFL rushing leader (1,514 yards), is a lead-pipe cinch for monster numbers this week against the Giants, who have surrendered staggering averages of 191 rushing yards in their last five games -- all New York losses.

14. For a playmaker-starved club like the 1-9 Jaguars, it would be a shock to see team officials pass on Wisconsin's Melvin Gordon (NCAA single-game record of 408 rushing yards last week) in next year's NFL draft -- on the sole rationale that running backs are no longer worthy of a high-end Round 1 pick.

But there is one way of justifying that move: If quarterback-turned-tailback Denard Robinson should maintain or improve upon his four-game average of 105 total yards/1 TD for Jacksonville's final five outings ... maybe, just maybe, Gordon -- a physical clone to Jamaal Charles -- won't be a necessity for the Jaguars.

Which brings us to this: On what planet is Gordon only the 28th-best prospect in next year's draft, even if tailbacks have been universally devalued by the NFL establishment?

From my perspective, Gordon is a can't-miss superstar at the next level ... and someone who can be counted for consistent home and away touchdowns.

Unlike the next guy listed here.

15. Let's address something of fantasy importance, especially for those who believe Vikings tailback Matt Asiata will re-emerge as Mr. Wonderful at home against the Packers:

Asiata's only a lock for monster (or even moderate) fantasy numbers when playing at home ... against non-divisional conference foes.

For his other 33 career outings, Asiata holds microscopic averages of 14.4 total yards and zero rushing TDs.

He'll be a lock for three scores then.

Jay Clemons, the 2008 Fantasy Football Writer of the Year (Fantasy Sports Writers Association), can be reached via Twitter, day or night, at @ATL_JayClemons.

Mining for gold in Week 8
Geoff Schwartz explains why he likes the Niners to keep rolling in Seattle, and why you can trust Baker Mayfield, but not Tua.
9 mins ago

Bo-verrated?
Bo Jackson made some bold claims about today's NFL, prompting Nick Wright to question Bo's standing in the sports pantheon.
1 hour ago

NFC South Rivals Meet on Thursday Night
The Falcons and Panthers will finish off their division series tonight. Here's some insight on how to bet their matchup.
2 hours ago

Wide Open
How will Baker Mayfield and the Cleveland Browns offense cope with the loss of superstar wideout Odell Beckham Jr.?
5 hours ago
those were the latest stories
Want to see more?
View All Stories
Fox Sports™ and © 2020 Fox Media LLC and Fox Sports Interactive Media, LLC. All rights reserved. Use of this website (including any and all parts and components) constitutes your acceptance of these Terms of Use and Updated Privacy Policy. Advertising Choices. Do Not Sell my Personal Info