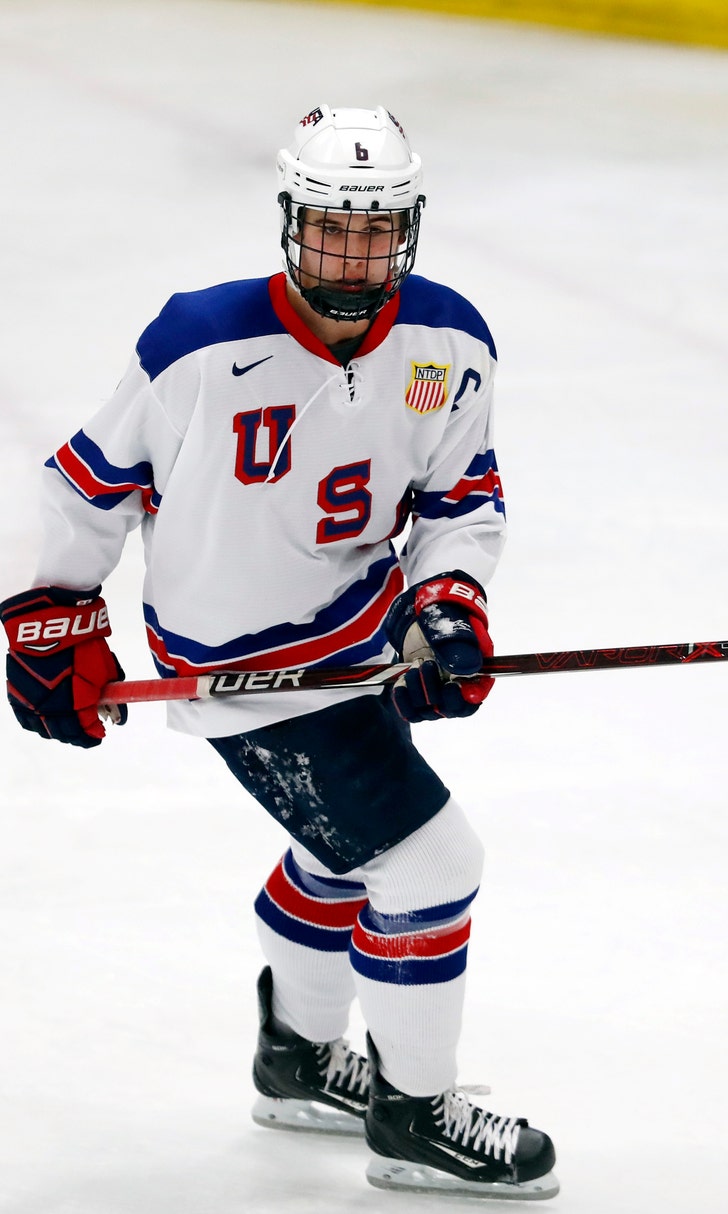 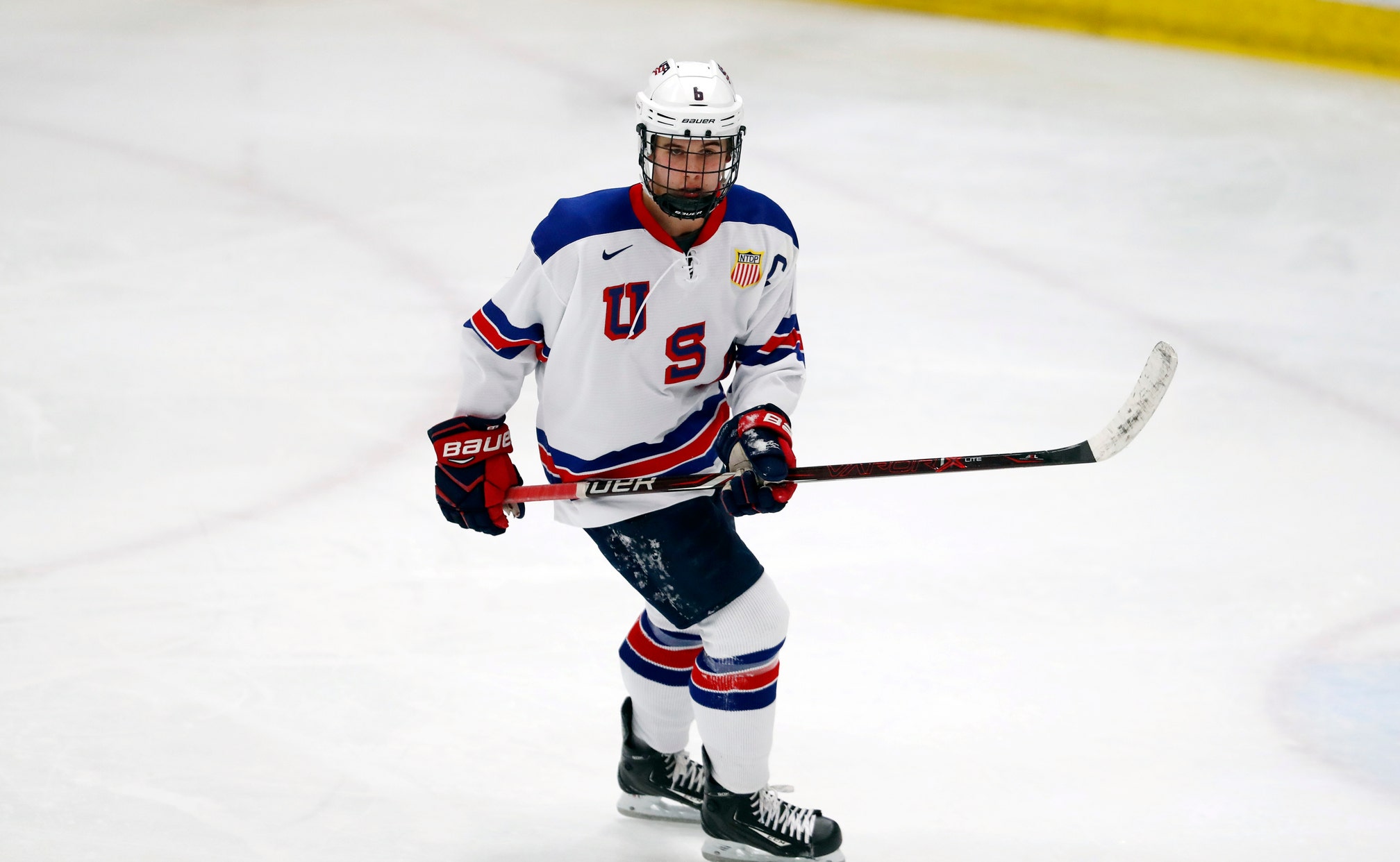 Detroit general manager Ken Holland and former Red Wing star Steve Yzerman chatted during the first intermission of one of Hughes' recent games. Scouts from the NHL were scattered throughout USA Hockey Arena that night, taking notes for teams paying them to evaluate the world's best hockey players.

Hughes, a 17-year-old center , will likely be the top pick in the NHL draft in June.

USA Hockey has developed the nation's top players for more than two-plus decades and four of them have been selected No. 1 overall — including Auston Matthews and Patrick Kane — from its National Team Development Program. Hughes is expected to be next.

"He's as good as I've seen come through here in terms of talent, work ethic and being the complete package on and off the ice," said senior director of operations Scott Monaghan, who has been with the program since its inception in 1996. "He's more like Patrick because of his skating and shiftiness than Auston, who was really big and strong.

"We have 30 to 40 scouts at most of our home games and as many as 60 because Jack is on a team with as many as six, seven or eight first-round picks."

Hughes chose to surround himself with the best American hockey players his age as an amateur instead of getting paid as the No. 1 pick in the Ontario Hockey League. He also could have graduated high school a year early to play with his brother, Quinn, a freshman at Michigan and a defenseman drafted No. 7 overall last summer by the Vancouver Canucks.

Hughes was born in Orlando, Florida, where his father, Jim, was assistant coach for the Solar Bears in the International Hockey League. He wasn't there long. Jim Hughes moved his family a few months later to Boston because he got a job as an assistant with the Bruins. Two years later, the former Providence defenseman went to New Hampshire — where he, his wife and three boys vacation each summer — to be an assistant and later head coach with the Manchester Monarchs in the American Hockey League.

Jim Hughes' next job appears to have been pivotal in the development of his sons' hockey careers because it landed him in Toronto as an assistant with the AHL's Marlies. He later became director of player development for the Maple Leafs.

"I always played him a year up and that's not easy to do in the hockey mecca of the world," Jim Hughes said. "Even when he was 5, you could see he had a special skill set. As he got older, coaches were yelling at their players to hit him and teams were trying to attack him. And quite frankly, he was still dominant."

While Jim Hughes was often busy with his job when the boys were growing up, Ellen Hughes taught her sons how to skate. She drew on her experience from playing for the U.S. women's national hockey team and at New Hampshire, where she was also on the soccer team.

"When Jack would go outside to play, older boys would always pick him even though he was at least two years younger than the rest of them and he always wanted the puck," Ellen Hughes recalled. "We never had to push him. It was always organic and Toronto was just the best place for him to prepare him for what he's doing now."

Jack Hughes starts his day at 6:15 a.m. with two eggs on a bagel with cream cheese and salami along with some fresh fruit, orange juice and a vitamin. He has to arrive at school shortly after 7 a.m. and if he's tardy or misses a class, USA Hockey has a staff member who knows it and there are consequences.

Hughes, who plans to graduate this month, takes four classes before heading to USA Hockey Arena in suburban Detroit to drill on a shooting pad, lift weights and go through an intense, two-hour practice before going to study table. His favorite meal is his father's grilled steak. Shortly after dinner, his parents don't have a hard time getting him to go sleep.

"If you don't go to bed early, this place will eat you alive," Jim Hughes said.

The 5-foot-10, 168-pound Hughes feasts on the competition wherever he goes, playing U.S.-based colleges against players much older and bigger than him, as well as in the United States Hockey League and international competition.

With 16 points in just four games, he was tournament MVP at the under-18 Five Nations tournament in the Czech Republic last month. He had 116 points in 60 games last year and he is averaging about two points a game this season, putting him on pace to set the NTDP career record for points. Hughes skates effortlessly in any direction and has soft hands, allowing him to dangle to puck to set up a shot for a teammate or himself.

"Jack Hughes is the leading candidate to be the No. 1 pick at this point and scouts are out evaluating him as often as possible," Holland said. "He's an incredibly talented player, who is destined to have a fabulous NHL career."