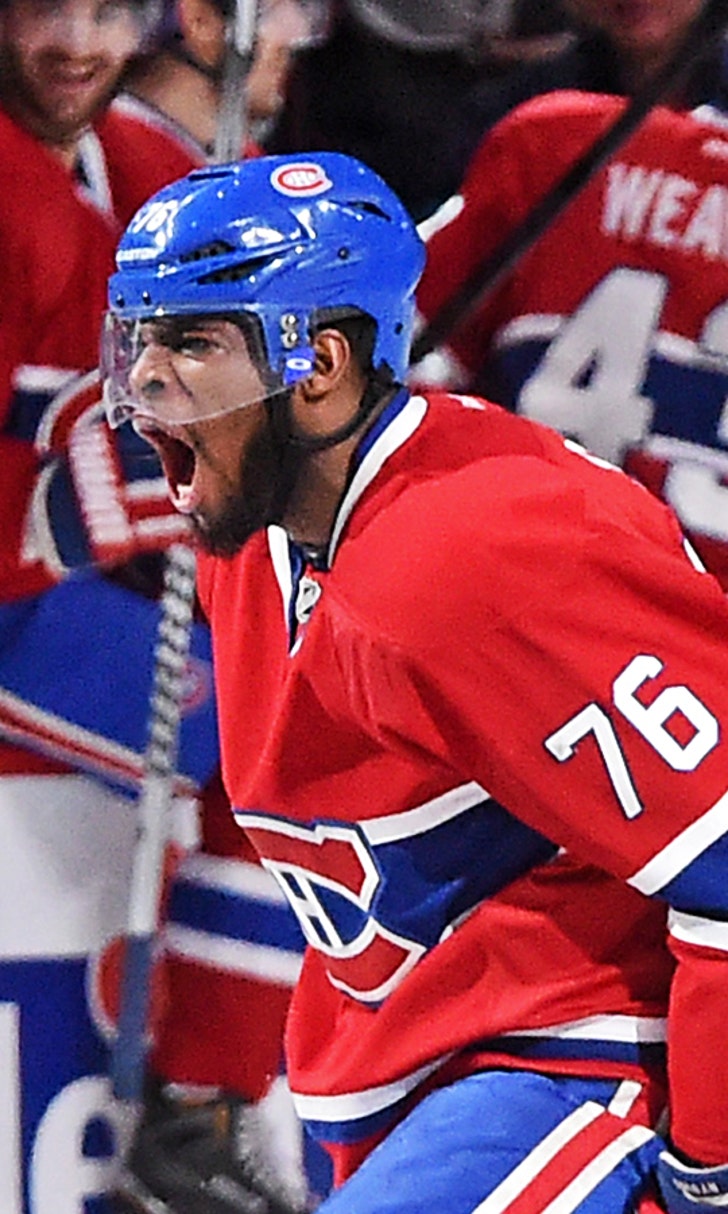 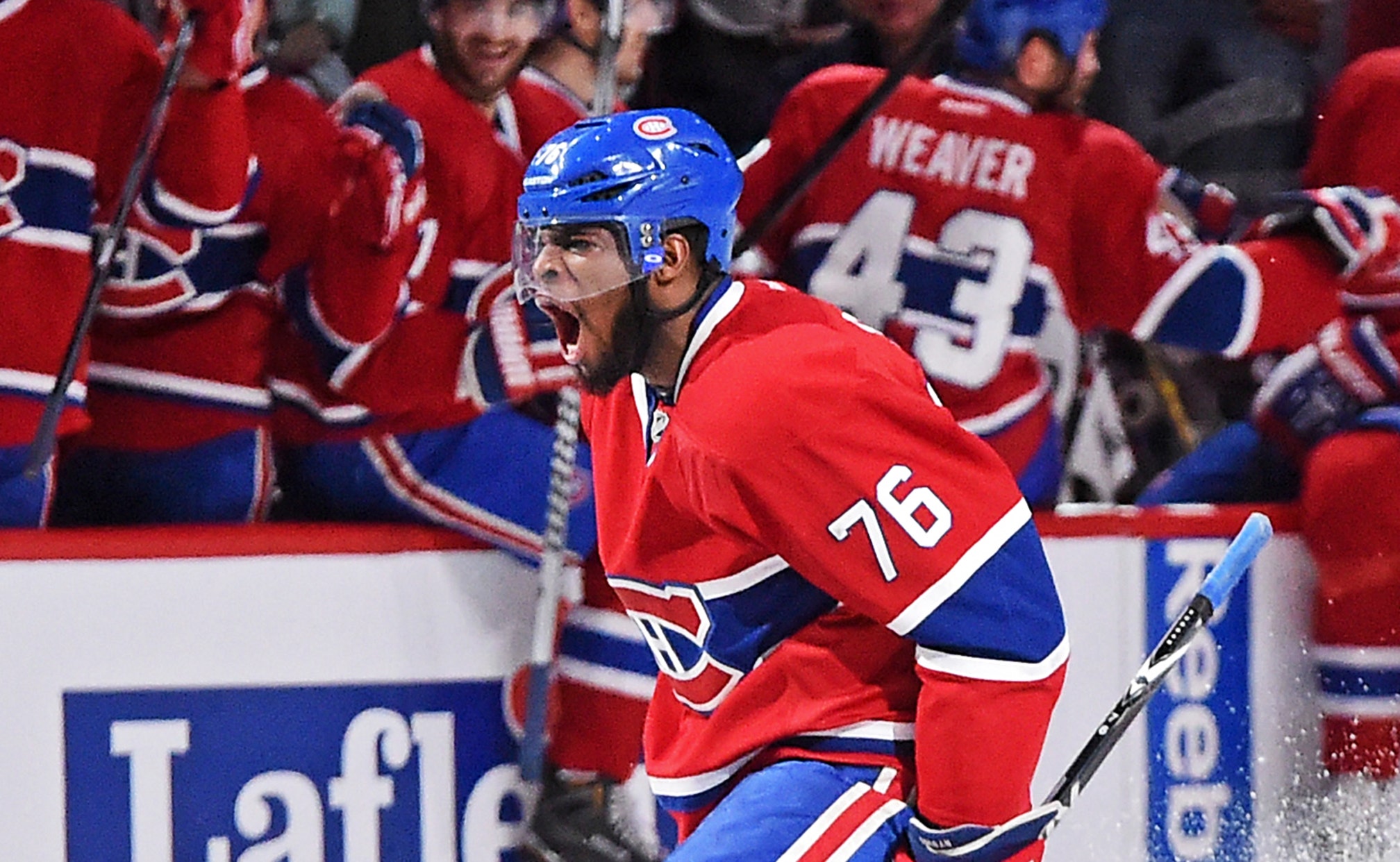 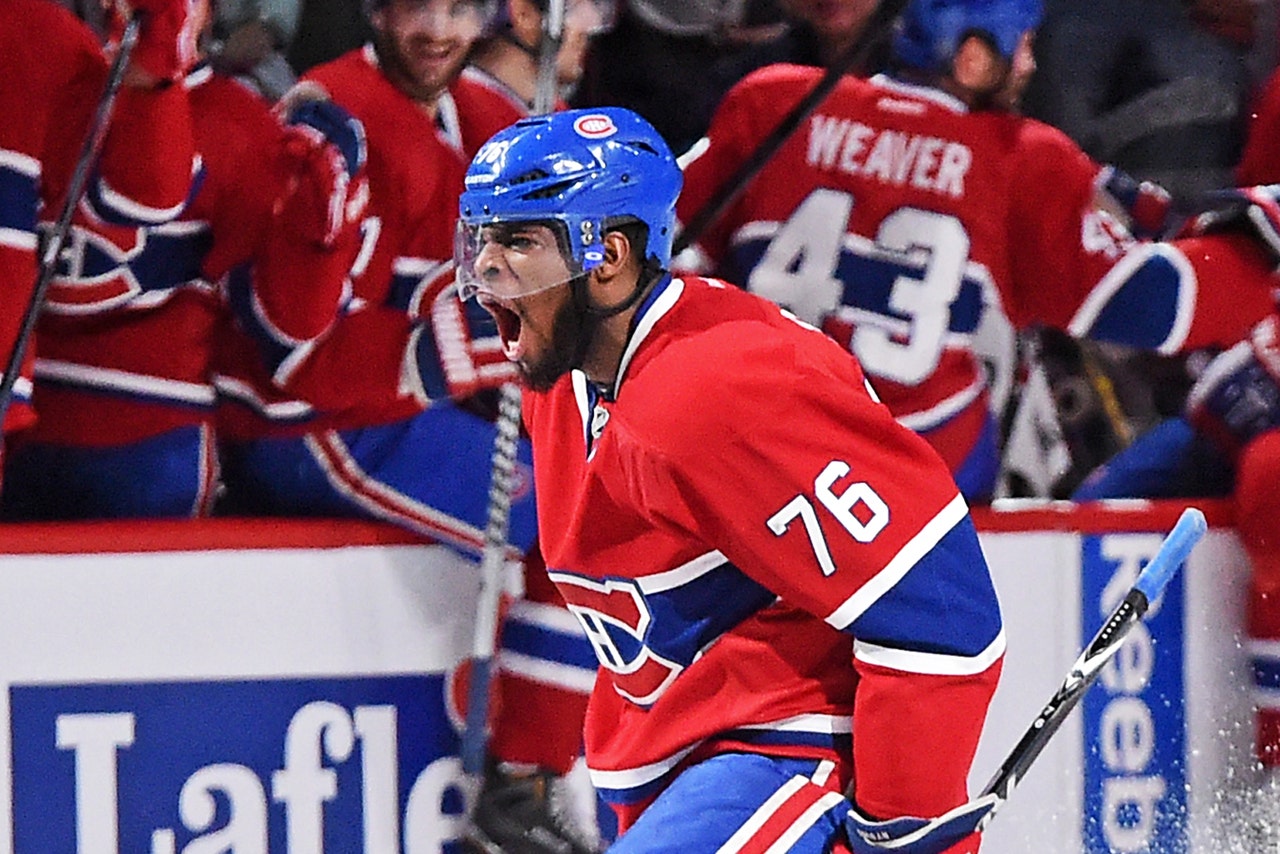 P.K. Subban has picked the right time to go on an offensive tear.

The 2013 Norris Trophy winner had his third straight two-point game with a goal and an assist, and the Montreal Canadiens held off the Boston Bruins for a 4-2 victory Tuesday to take the lead in their NHL Eastern Conference playoff series.

The Canadiens are up 2-1 with Game 4 set for Thursday in Montreal.

"I'm just the beneficiary of the guys playing well around me, supporting me," the defenseman said. "It starts in goal. Well, it actually starts with our coaching staff and making sure everybody is feeling confident. We're doing it together. ... When we had adversity, we're sticking together doing the right things.

"It's fun to play on teams where you know guys are going to support you."

Lars Eller and fourth-line winger Dale Weise also had a goal and an assist, and Tomas Plekanec scored Montreal's other goal.

Patrice Bergeron and Andrej Meszaros scored for the Bruins.

Subban became the third Canadiens defensemen with three consecutive games of more than one point in the playoffs, after Larry Robinson in 1978 and 1987 and J.C. Tremblay in 1971.

While Montreal has stolen home-ice advantage from the Bruins, the series between the longtime rivals is hardly over. Boston outshot Montreal 28-26, hemmed in the Canadiens in their end for long stretches, and looked nothing like a team that is overmatched and demoralized.

But unlike the first two games, the Bruins were unable to erase a two-goal deficit. Their frantic third-period comeback fell short, and Eller ended it with an empty-net goal with three seconds left.

"I don't think we played badly. We just made stupid mistakes that ended up costing us the game," said Bruins goalie Tuukka Rask. "We have to get rid of those and keep playing like we're playing.

"You're three goals behind and it's tough. You battle back, but time's running out. We have to try to get that lead and play with the lead."

For the third straight game, the Canadiens held a 3-1 lead in the third period. This time, they didn't let it slip away. In Game 2 on Saturday in Boston, the Bruins scored four goals in the final 10 minutes for a 5-3 comeback win.

Rask was pulled with 2:20 left. Only four seconds later, Meszaros beat Price with a high shot through traffic off a feed from Milan Lucic.

"We learned a little bit from the last game and we didn't panic," said Eller, who has eight points in seven playoff games after a disappointing regular season.

The Bruins took control of the puck through the first 10 minutes. Then Michael Bournival made a gritty play to get the puck around the boards to Subban, who left it for Thomas Vanek for a diagonal pass that gave Plekanec a shot into an open side for his third of the playoffs at 10:57.

Subban was sent off for roughing after a high hit on Reilly Smith that also took out Vanek, sending the Austrian off the ice with an apparent right leg problem. He returned for the second period.

"I spoke to him after and he said, `I'm fine. Don't worry about it,'" Subban said. "I was pretty happy to see him back there skating. Obviously I don't want to hurt my own teammates with a body check, but sometimes that happens."

As Subban's penalty ended, Rask neglected to alert his teammates by banging his stick on the ice. That left the defenseman open to collect Eller's pass, go in on a breakaway, fake out Rask and score on a low forehand shot at 14:44.

Mike Weaver blocked a shot that went to Daniel Briere, who sent Weise in on a breakaway with a pass up the middle. The fourth-line winger beat Rask between the pads for a three-goal lead at 13:52 of the second.

But Bergeron won a face-off from Plekanec in the Montreal zone and reached across himself to deflect Torey Krug's point shot past Price with 2:12 left in the period.

That put the Bruins in comeback mode. But despite pushing hard, they managed only seven third-period shots.

Notes: As expected, the Canadiens put Douglas Murray in the lineup for the first time in the postseason in place of Francis Bouillon. Travis Moen went in for Brandon Prust. Ryan White, George Parros and Jarred Tinordi were scratched. ... Gallagher celebrated his 22nd birthday. ... The Bruins made no changes, with Matt Barkowski, Justin Florek and Corey Potter sitting out.