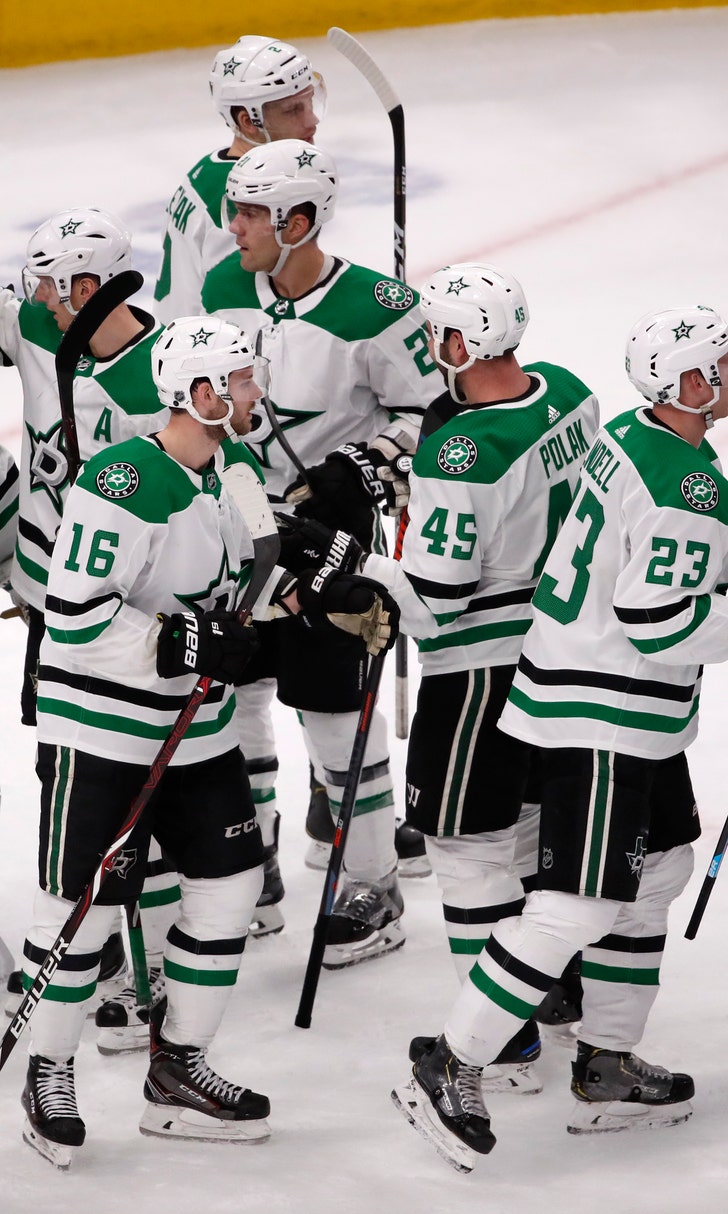 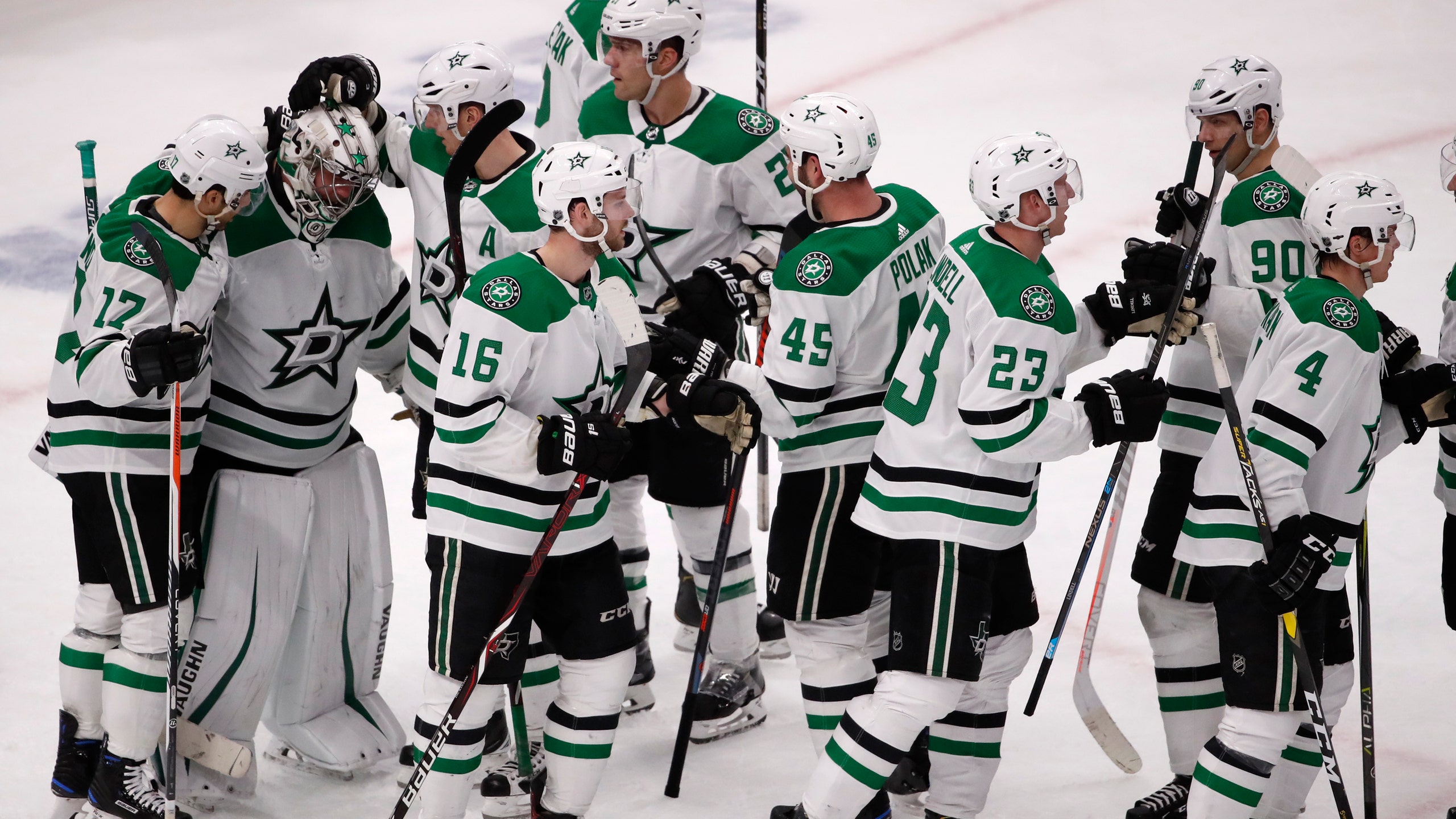 Jason Spezza broke a tie on a 5-on-3 power play midway through the third period and Dallas beat the Chicago Blackhawks 4-3 on Sunday after blowing a three-goal lead.

The victory was overshadowed by the loss of Mats Zuccarello with what he thought was a broken right arm in his first game with Dallas. Acquired from the New York Rangers on Saturday, Zuccarello had a goal and assist, but left after two periods and is expected to be sidelined at least four weeks.

"I blocked a shot and it hit me the wrong way," said Zuccarello, whose arm was in a soft cast with a splint. "It's unfortunate.I kind of knew it right away, not that it was broken, but something was wrong."

Zuccarello said he'd have the arm evaluated Monday or Tuesday.

On the winner, Spezza took Alexander Radulov's feed across the crease and tapped the puck past goalie Cam Ward. Radulov and Radek Faksa also scored and Anton Khudobin made 44 saves for the Stars, who pulled two points ahead of idle Colorado and into the first Western Conference wild card.

Dallas forward Jamie Benn suffered an upper-body injury during the first shift of the game and didn't return. He's out day-to-day.

"It's an incredibly gritty win for us, one that we needed, on a really tough back-to-back," Spezza said. "With the bodies going down throughout the game, I thought we responded well."

Despite being outshot 47-29 as the Blackhawks came on late, the Stars prevailed after a listless 3-0 loss at home to Carolina on Saturday.

"It's inspiring," coach Jim Montgomery said. "To watch those players as a team, as a group, overcome the adversity we had to overcome."

Chicago star Patrick Kane was held off the scoresheet, ending his points streak at 20 games, even though he was visible in creating chances.

"He was involved," coach Jeremy Colliton said. "It just didn't go in for him or the guys he was playing with."

Chris Kunitz, Drake Caggiula and Jonathan Toews tied it for Blackhawks after they fell behind 3-0 early in the second period. Duncan Keith and Erik Gustafsson each had two assists, and Ward stopped 25 shots.

"I liked it a lot, the last two periods in particular," Collition said. "I don't care how well you play, it's going to be tough to pull out of it against team, they're scratching and clawing just like us.

The Stars capitalized on a pair of Blackhawks breakdowns to take a 2-0 lead in the first period.

Set up by Zuccarello's long pass from the Dallas zone, Faksa got past Gustafsson, broke in alone and beat Ward between the pads 11:35 in to open the scoring. Gustafsson found himself alone in the Chicago zone after the blade on defense partner Slater Koekkoek's skate fell out.

Radulov, alone in front of the net, made it 2-0 on a backhander with 2:32 left in the period. He was set up on a quick feed by Miro Heiskanen, who had picked of Gustav Forsling's pass near the point.

Zuccarello made it 3-0 at 1:44 of the second when he whipped in Tyler Seguin's cross-ice feed from lower edge of the right circle.

Kunitz cut it to 3-1 on a one-timer from the slot 1:14 later. Caggiula trimmed it to 3-2 with 4:23 left in the second on a tip-in that required a video review to confirm. Caggiula's deflection of feed was ruled no-goal by referees when Khudobin lunged and gloved the puck at the goal line, but the review determined the puck had completely crossed the line.

Toews 29th goal, on a power-play at 4:16 of the third, tied it at 3. He connected on a screened shot from the top of the right circle.

Dallas killed a double-minor high-sticking penalty to Roman Polak in the final five minutes to hang on for the win.

NOTES: Chicago D Brent Seabrook returned after missing three games with an abdominal strain. C Marcus Kruger was back in action after leaving Friday's game after blocking a shot. ... Radulov returned after sitting out Saturday due to an illness. ... To get Zuccarello, Dallas sent the Rangers a conditional second-round draft pick this year and a conditional third-round selection in 2020. The 2019 pick would become a first-rounder if Dallas advances to the conference finals this spring and Zuccarello plays in at least 50 percent of the team's cumulative games over the first two rounds. The 2020 pick becomes a first-rounder if Zuccarello signs with Dallas.

Stars: At Vegas on Tuesday night.

Blackhawks: At Anaheim on Wednesday night.