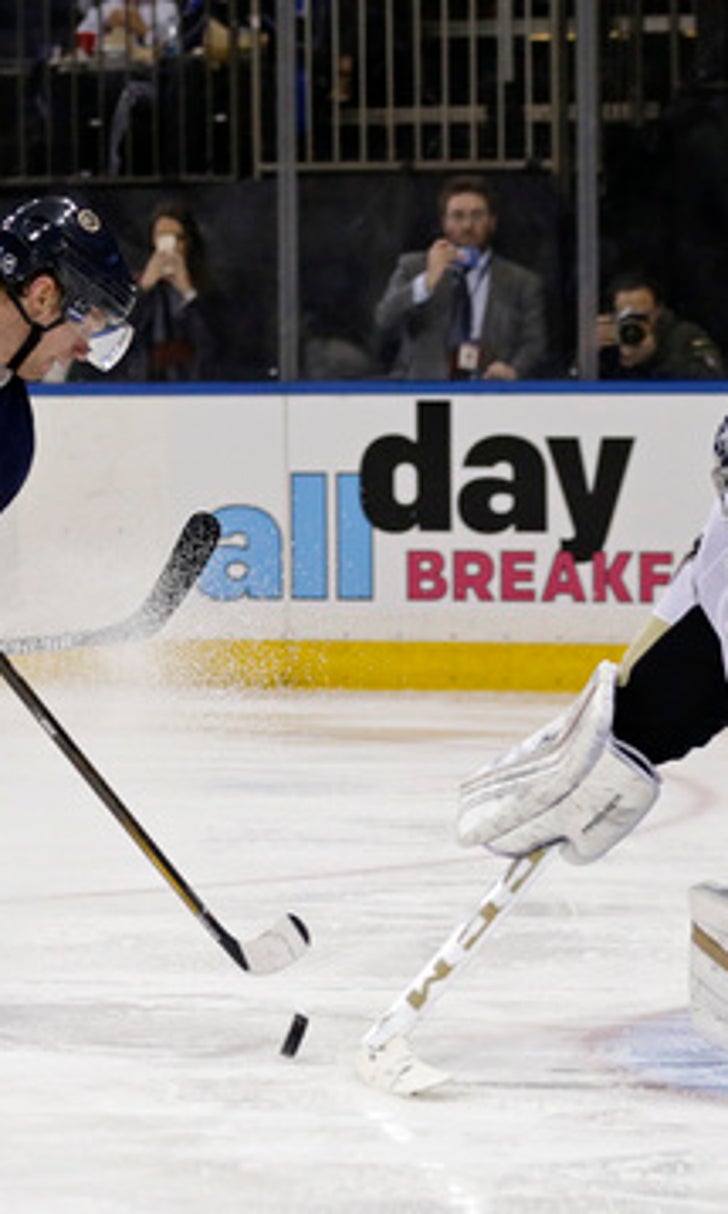 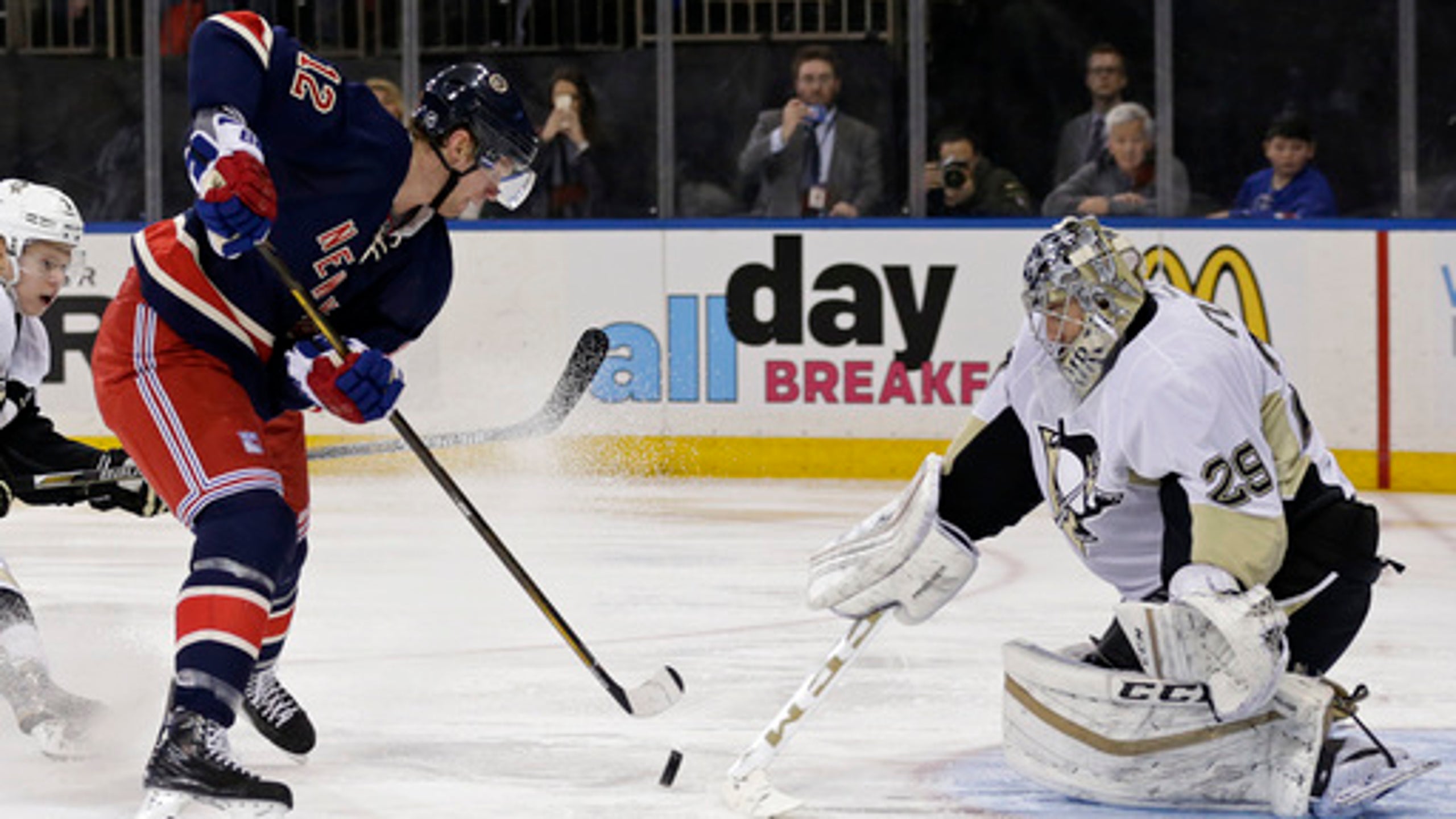 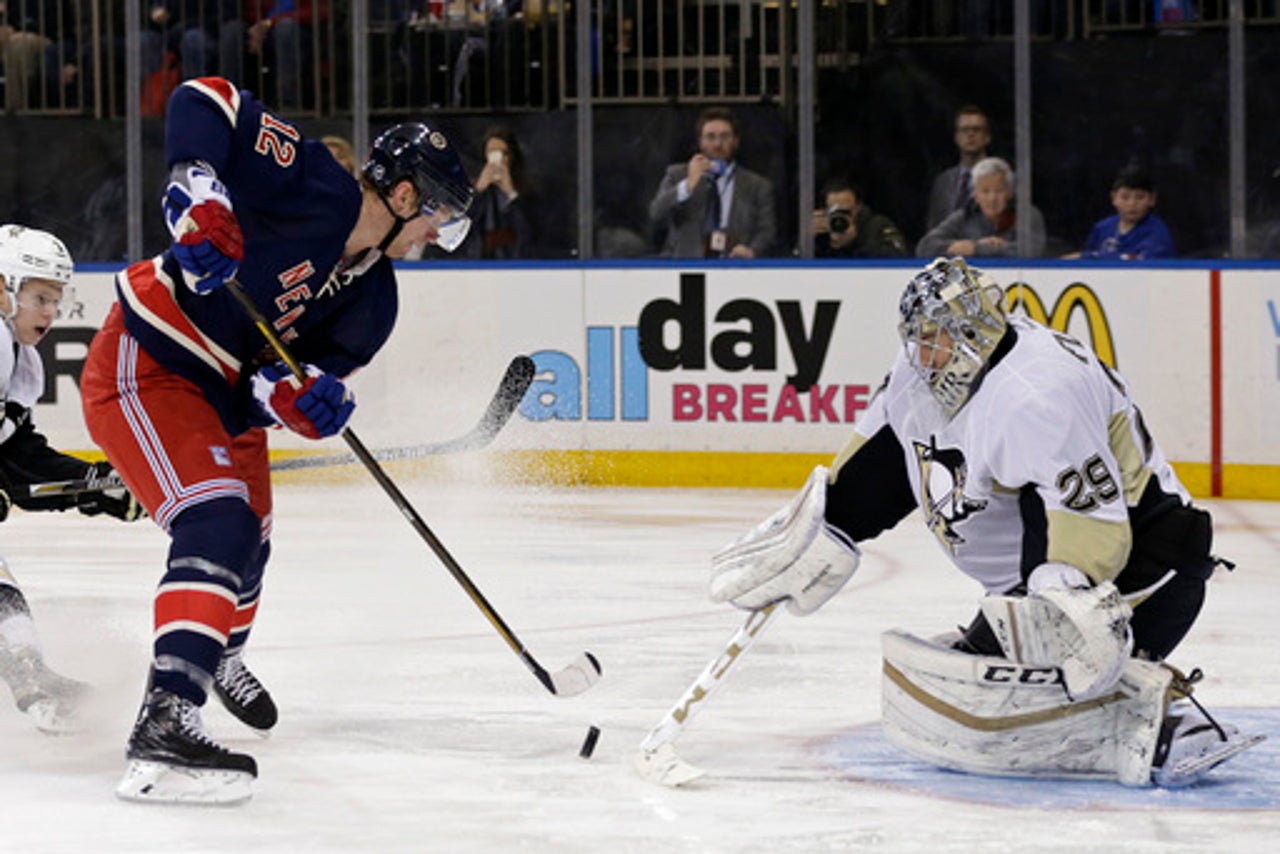 NEW YORK (AP) Conor Sheary scored twice and Matt Cullen had the go-ahead goal in the third period and the short-handed Pittsburgh Penguins beat the New York Rangers 5-3 on Sunday.

Pittsburgh entered the game in eighth place and in the final playoff spot in the Eastern Conference with 78 points.

The Penguins will be out with star Evgeni Malkin, who is out six to eight weeks after suffering an upper-body injury in Friday's win over Columbus. He is second on the team with 27 goals and 31 assists in 57 games.

Patric Hornqvist also scored for the Penguins and Marc-Andre Fleury, who won his 350th career game Friday, made 24 saves for the Penguins. Sidney Crosby added an empty-netter for his 29th of the season.

With the game tied 3-3, Cullen sent the puck from behind the net and it deflected off defenseman Marc Staal and past Henrik Lundqvist at 11:09 of the third period.

McDonagh scored on a wraparound at 5:04 of the third for his ninth of the season to tie it at 3. Less than a half-minute later, Fleury stopped Rick Nash on a breakaway.

Lundqvist, who returned Saturday after missing three games with a neck injury, made 28 saves.

The Penguins dominated the second period, outshooting the Rangers 10-2.

Sheary, recalled from their American Hockey League affiliate in Wilkes-Barre/Scranton late Saturday, scored both of his goals in the period. First, he deflected Justin Schultz's point shot past Lundqvist at 7:30.

After the Rangers tied it on Brassard's power-play goal 89 seconds later, Sheary eluded Rangers forward Kevin Hayes and scored on a breakaway at 15:55 to give the Penguins a 3-2 lead after two periods.

Coming off Saturday's overtime loss to Detroit, the Rangers got off to a fast start, outshooting the Penguins 13-3 in the first 11 minutes.

But Fleury kept the game scoreless until Pittsburgh opened the scoring less than minute later.

Lundqvist made a save on Crosby's one-timer, but Hornqvist took the rebound and shot from behind the net and banked it off the Rangers goalie and into the net for a power-play goal at 11:56 of the period.

The Rangers tied it at 18:06 when Kevin Klein started the rush into the Penguins zone and sent a pass to Stepan, who passed to Kreider for a tap-in at 18:06 for his 16th of the season.

NOTES: Dominik Simon made his NHL debut for the Penguins. Malkin missed 10 games earlier this season with an undisclosed injury. The team went 5-4-1 in his absence and Pittsburgh is 70-45-9 with Malkin out of the lineup during his 10-year career. ... Lundqvist suffered a neck injury in a collision with Ryan McDonagh in the previous meeting with the Penguins on March 3. ... Forward Tanner Glass missed the game because of an upper-body injury suffered in Saturday's loss to Detroit. ... Former New York Giants offensive lineman David Diehl was in attendance.