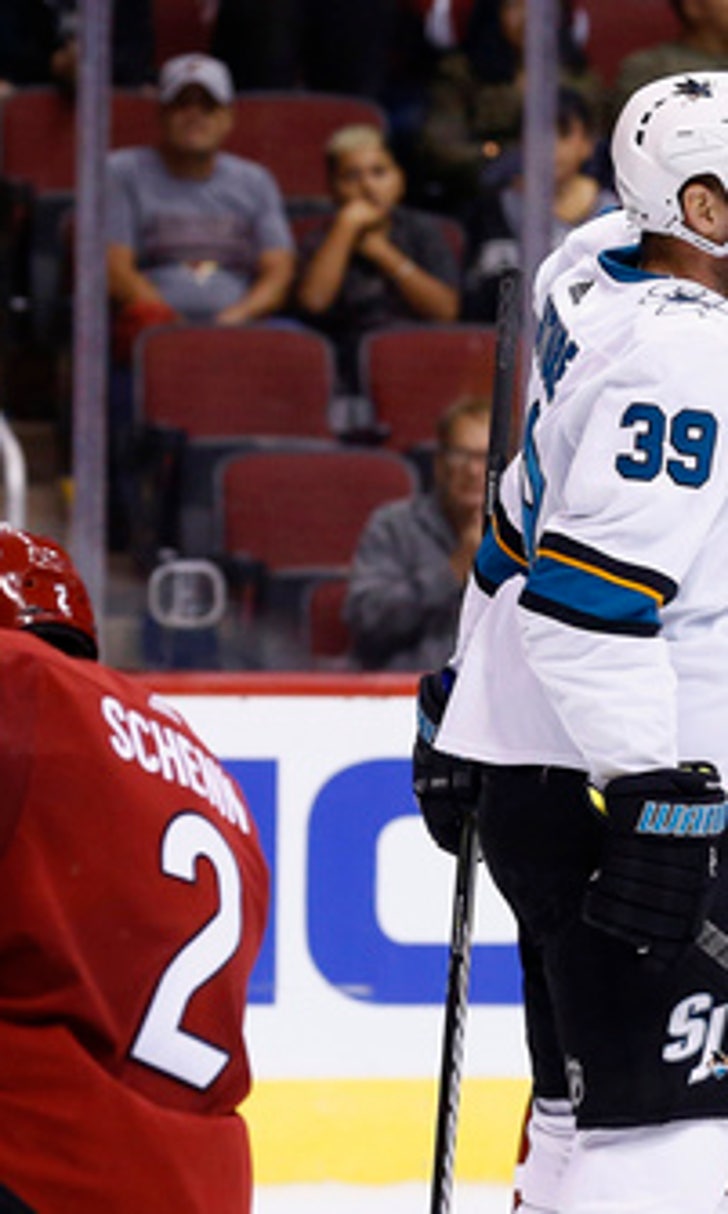 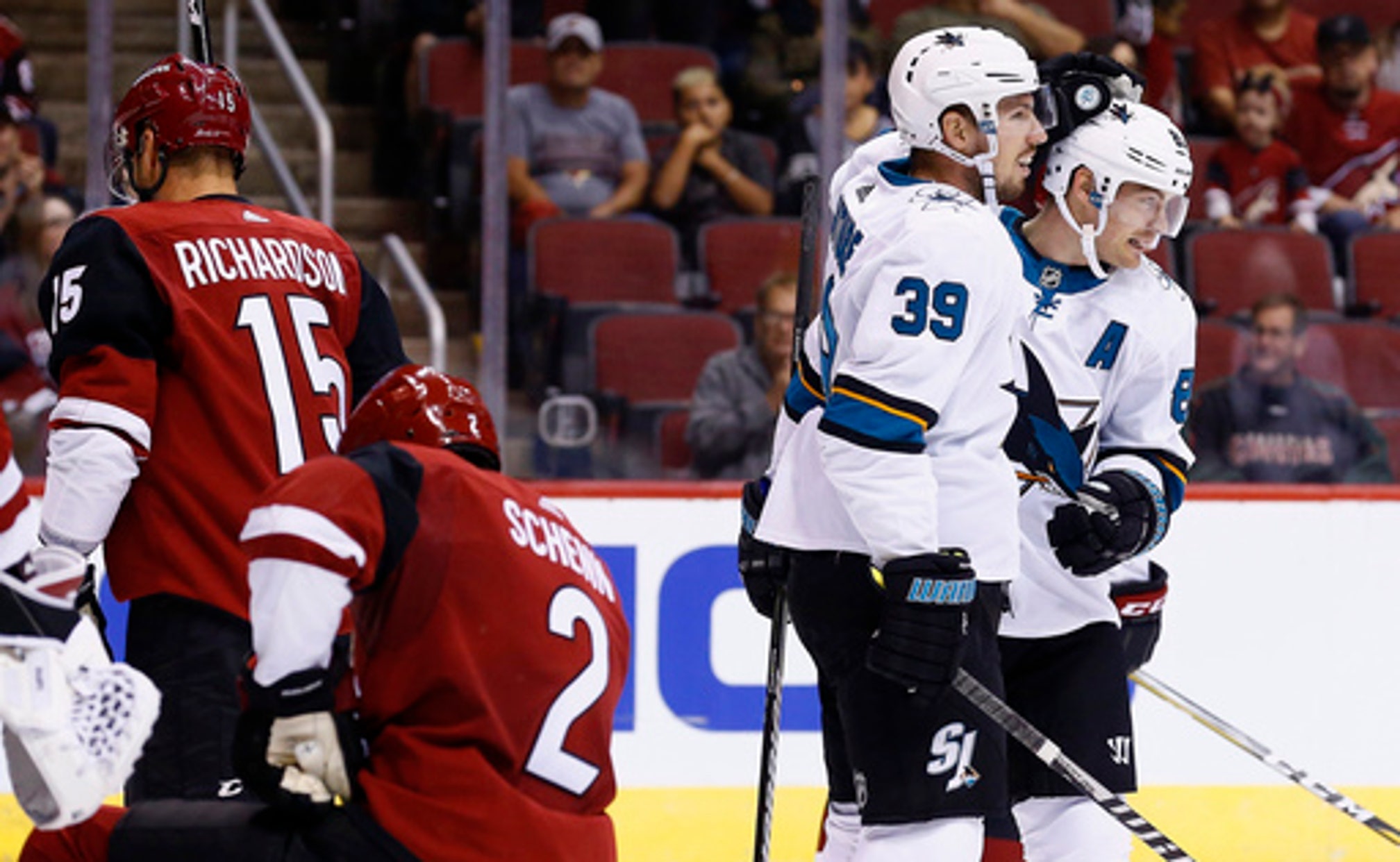 Sharks need to fill Marleau void to make another run

SAN JOSE, Calif. (AP) It's been more than eight years since the San Jose Sharks last played a single game without Patrick Marleau on the ice, much less an entire season.

Marleau's departure from the Sharks to Toronto this offseason is the end of a two-decade era in San Jose. But with most of the same players back that helped San Jose make it to the Stanley Cup Final two seasons ago, the Sharks believe they still have the pieces in place to make another run at a title.

''Guys have got to step up,'' forward Logan Couture said. ''Whether it's someone who had a down year last year who's a veteran or someone that has come up (from the minors) that's going to step into the NHL lineup and produce. We need someone to do that. We have to do it from within. Hopefully, guys will step up.''

The Sharks took a step back last season after making it all the way to the Stanley Cup Final the previous year before losing to Pittsburgh in six games. A late-season slump followed by key injuries to Couture and Joe Thornton helped lead to a six-game loss in the first round to Edmonton.

Marleau, the team's all-time leading scorer, then took his 27 goals to sign with the Maple Leafs. Instead of looking outside for a replacement, the Sharks are counting on filling that role with a mix of young players from the AHL and veterans who had down years last season.

''Our foundation is being able and being very comfortable in 2-1, 1-0 games. But you have to score in this league,'' coach Peter DeBoer said. ''I don't think we're trying to get blood from a stone. I think we have scoring in here. We got to get it out.''

Here are some things to watch this season:

JUMBO'S HEALTH: While Marleau left, Thornton returned at age 38 after signing an $8 million deal. Thornton had seven goals and 43 assists last season for his fewest points in an 82-game season since 1998-99. Thornton missed the final week of the regular season and the first two playoff games with a left knee injury before returning for the final four games of a first-round loss to Edmonton. He then underwent surgery to repair his MCL and ACL after the season but believes he is even stronger this season.

POWERLESS PLAY: For years, San Jose's success depended heavily on a potent power play. With the play-making of Thornton and finishing skills of players like Joe Pavelski and Marleau, opposing teams often feared taking penalties. That changed last year when San Jose ranked 25th in the league at 16.7 percent, too often relying on Norris Trophy winner Brent Burns' big shot from the blue line. The Sharks will need to make some changes with Marleau gone and there could be some other tinkering as well.

''That's a big part of our offense,'' DeBoer said. ''It's always been a weapon here. Two years ago it was a weapon. It was top in the league. We didn't do a lot differently last year from the year before. It didn't work.''

BOUNCE BACK SEASONS: The Sharks are counting on rebound years from several players who struggled last season. Tomas Hertl, Joonas Donskoi and Chris Tierney all played major roles in the 2016 Stanley Cup run but didn't back that up last year. Mikkel Boedker was supposed to add speed and another scoring threat to San Jose's attack but was limited to 10 goals and often had his ice time limited because of ineffectiveness.

TIMO TIME: San Jose is also counting on big contributions from several unproven young players, most notably forward Timo Meier, who had three goals in 34 games as a rookie. Kevin Labanc and Danny O'Regan also could provide the kind of offense from young players that helped carry Pittsburgh to the past two championships.

''It's up to them to really push through and break through,'' Pavelski said. ''It's not one night or two nights here or there, it's a consistency thing. When that starts happening then you'll see guys take over on our team.''

DOMINANT D: While the Sharks made no major additions this offseason, they did lock up two key pieces by signing goalie Martin Jones to a six-year, $34.5 million extension and shut-down defenseman Marc-Edouard Vlasic to an eight-year, $56 million deal. Burns is also under contract through 2024-25, meaning the Sharks are in good shape on the back end for years. The one hole is on the third pair where David Schlemko left in the expansion draft. Dylan DeMelo will likely fill that role although Joakim Ryan and Tim Heed also could push for time.