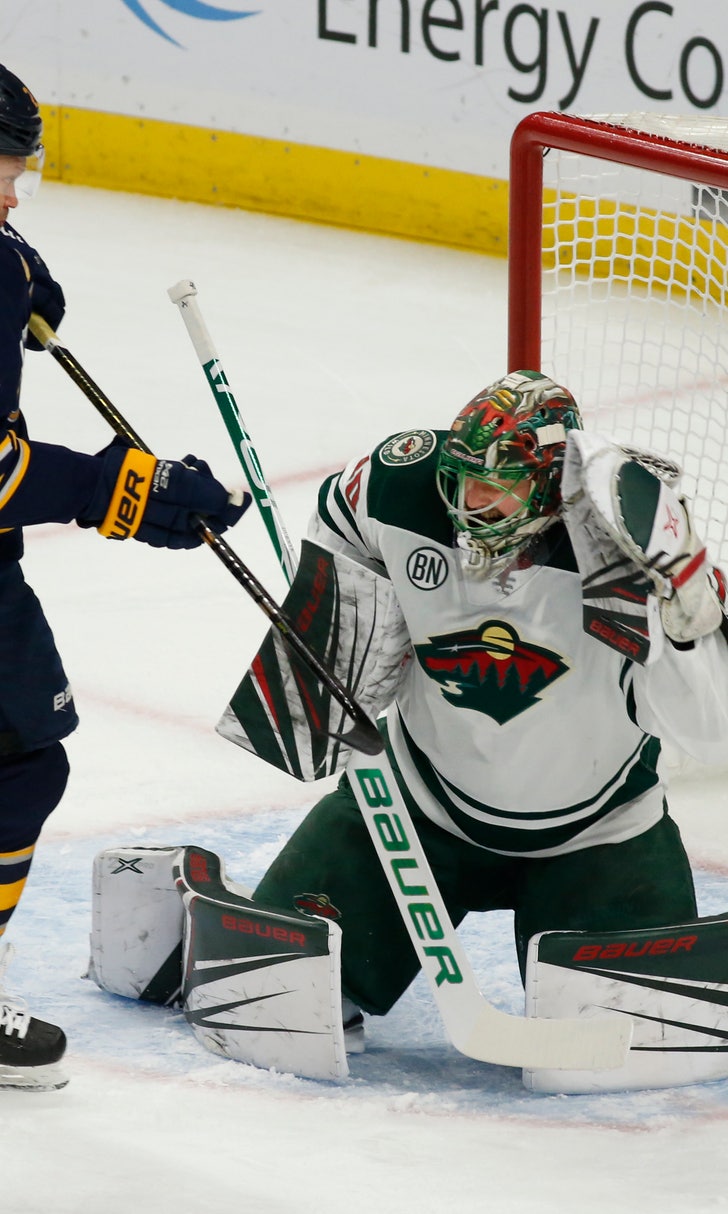 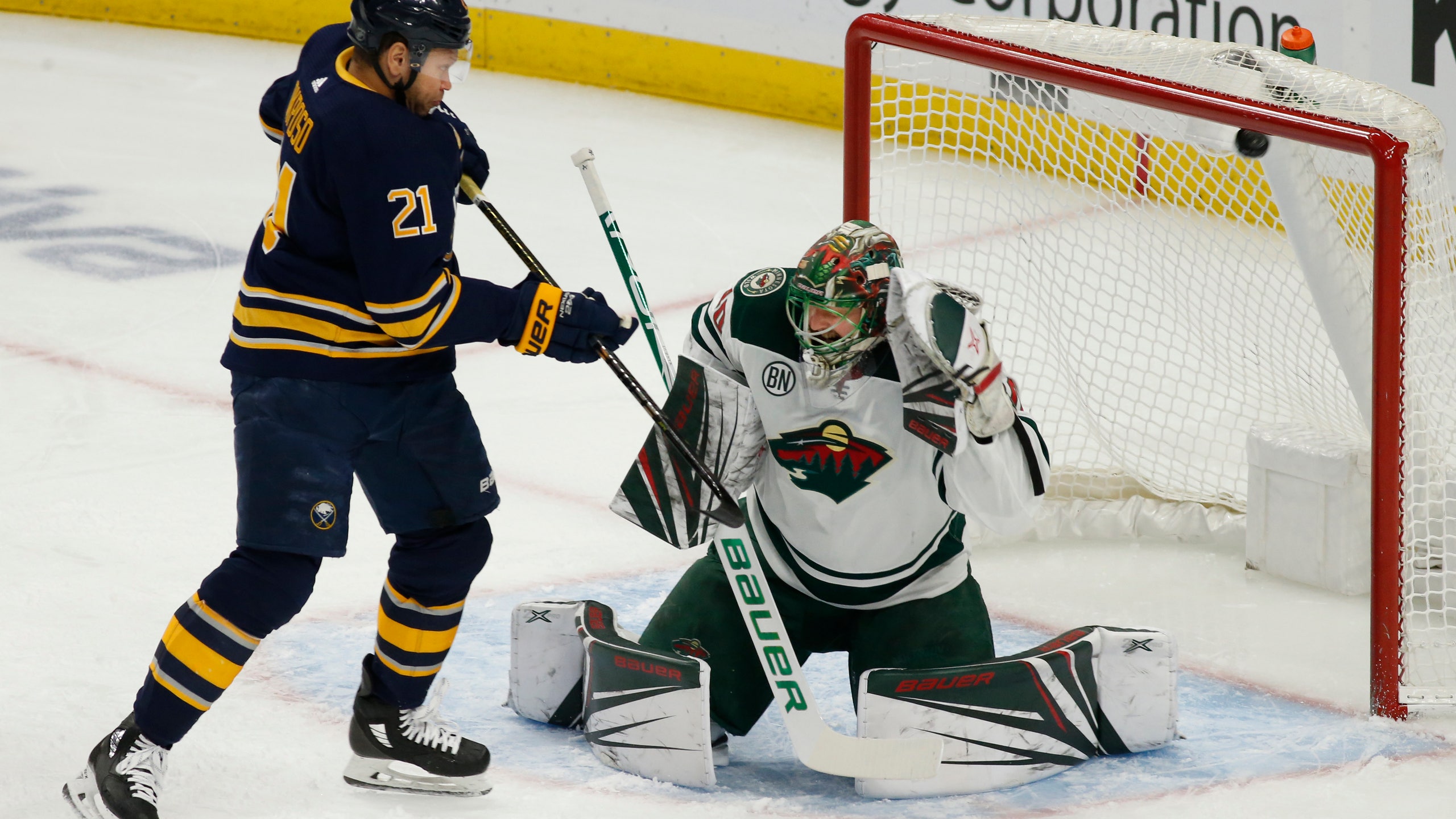 Reinhart scores to give Sabres 5-4 shootout win over Wild

What mattered more was how Buffalo persevered behind goalie Linus Ullmark's 41 saves and forward Sam Reinhart capping a two-point game by scoring the lone shootout goal in a 5-4 win over the Minnesota Wild on Tuesday night.

"We've got to learn to tighten it up, but I'll give the guys credit, we found a way to win," Housley said.

Buffalo led by two in the second period but allowed the Wild to force overtime with 1:37 remaining in the third, when Zach Parise jammed in a loose puck at the left post.

The Sabres, however, didn't let down and won for just the third time in nine games. In the process, they also eased the criticisms directed at a team that had fallen out of the playoff picture by going 8-14-4 since a 10-game winning streak in November.

"I like the way they stuck together," Housley said.

The game wasn't decided until the third round of the shootout on a goal Reinhart didn't initially realize went in.

Driving in from the left wing, Reinhart snapped a shot that goalie Devan Dubnyk got a piece of with his right arm. The puck, however, had enough on it to dribble into the net.

"I had no idea. I was just kind of turning up and just heard the crowd," Reinhart said. "It was nice to hear."

And there was no mistaking the cheers that followed a moment later, when Parise's backhand sailed high and wide of the top right corner of the net.

Reinhart had an assist and scored to break a 3-all tie 6:25 into the third period by deflecting in Jake McCabe's pass. Jack Eichel set up two goals and C.J. Smith also scored in a game the Sabres never trailed.

Buffalo's once anemic power-play unit converted both opportunities, on goals from Evan Rodrigues and Rasmus Dahlin. The two goals matched the Sabres' combined output in their previous 11 games during which Buffalo went 2 of 28 with the man advantage.

The Wild dropped to 0-1-2 in their past three games, matching their second-longest skid of the season.

On the bright side, Minnesota earned a point in its second straight outing after rallying from a third-period deficit in a 4-3 overtime loss to Chicago on Saturday.

"You have to have that ability to come back, but I'd love to see us play with the lead a little bit," Parise said. "It gets tough. You stress yourself out always fighting trying to come from behind. We've got to get ourselves a lead."

Buffalo bounced back after opening a seven-game homestand with a 7-3 loss to Chicago on Friday night.

Housley used the three-day break between games to attempt to give his slumping team a spark by shuffling his top three lines and defensive pairings. He most notably split up Buffalo's All-Star pairing of Eichel and forward Jeff Skinner. Eichel centered Kyle Okposo and Conor Sheary, while Skinner moved to a line centered by rookie Casey Mittelstadt.

The moves appeared to pay off when Buffalo's revamped second power-play unit converted on Rodrigues' goal 4:31 into the game. The Sabres built a 3-1 edge 11:33 into the second when Dahlin's shot from inside the blue line went in off Spurgeon's stick in front.

Defensive lapses led to the Wild tying the game at 3 before the period was over.

Spurgeon scored 3:10 later, when he was allowed to break in up the right side, drive around the net and wrap in a shot.

Coyle tied it at 3 with 2:55 left in the second period. Ullmark stopped Greg Pateryn's shot from the right point and Luke Kunin slipped the rebound under the goalie but off the right post. Coyle beat two Sabres defenders to put the loose puck into the open net.

NOTES: Wild coach Bruce Boudreau did not have an update on captain Mikko Koivu, who sustained an undisclosed injury and did not return after colliding with Buffalo's Tage Thompson in the first period. ... Smith played a day after being recalled from AHL Rochester, where he had five goals and seven assists in eight games after being demoted from Buffalo. ... Kunin and Kyle Rau played for Minnesota a day after being called up from AHL Iowa. ... Wild D Anthony Bitetto, claimed off waivers from Nashville on Jan. 25, played his first game with Minnesota.

Sabres: Continue their seven-game homestand against the Carolina Hurricanes on Thursday.