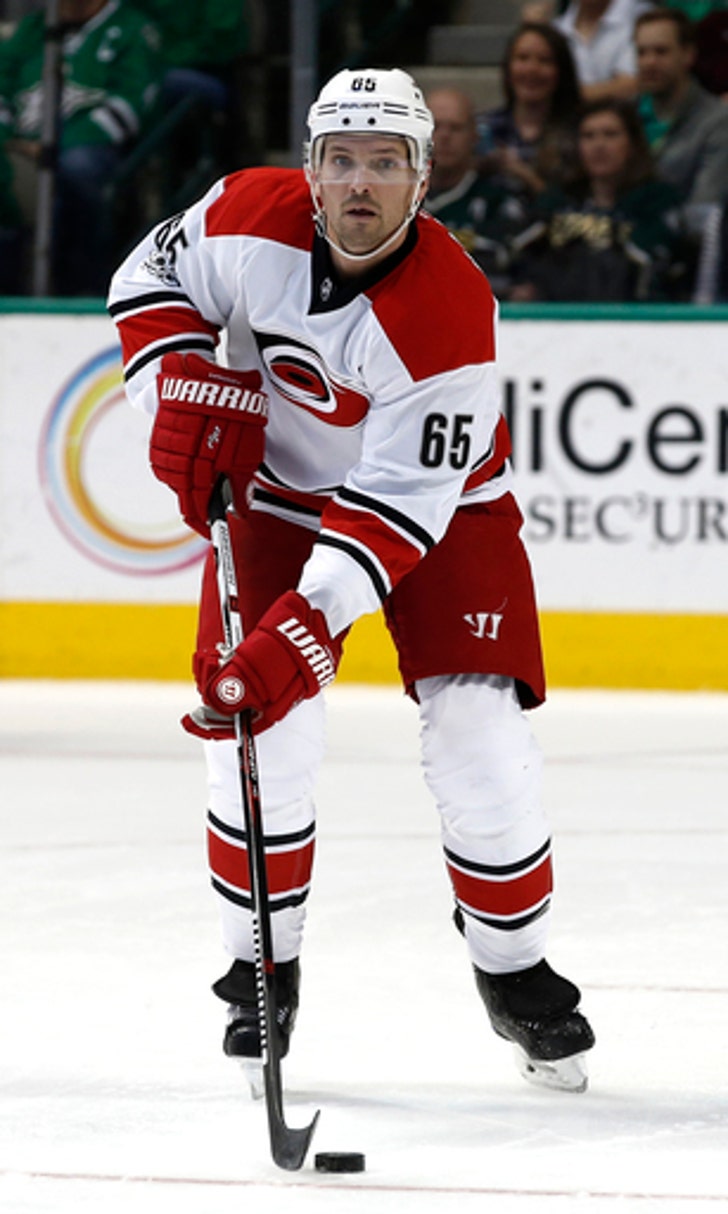 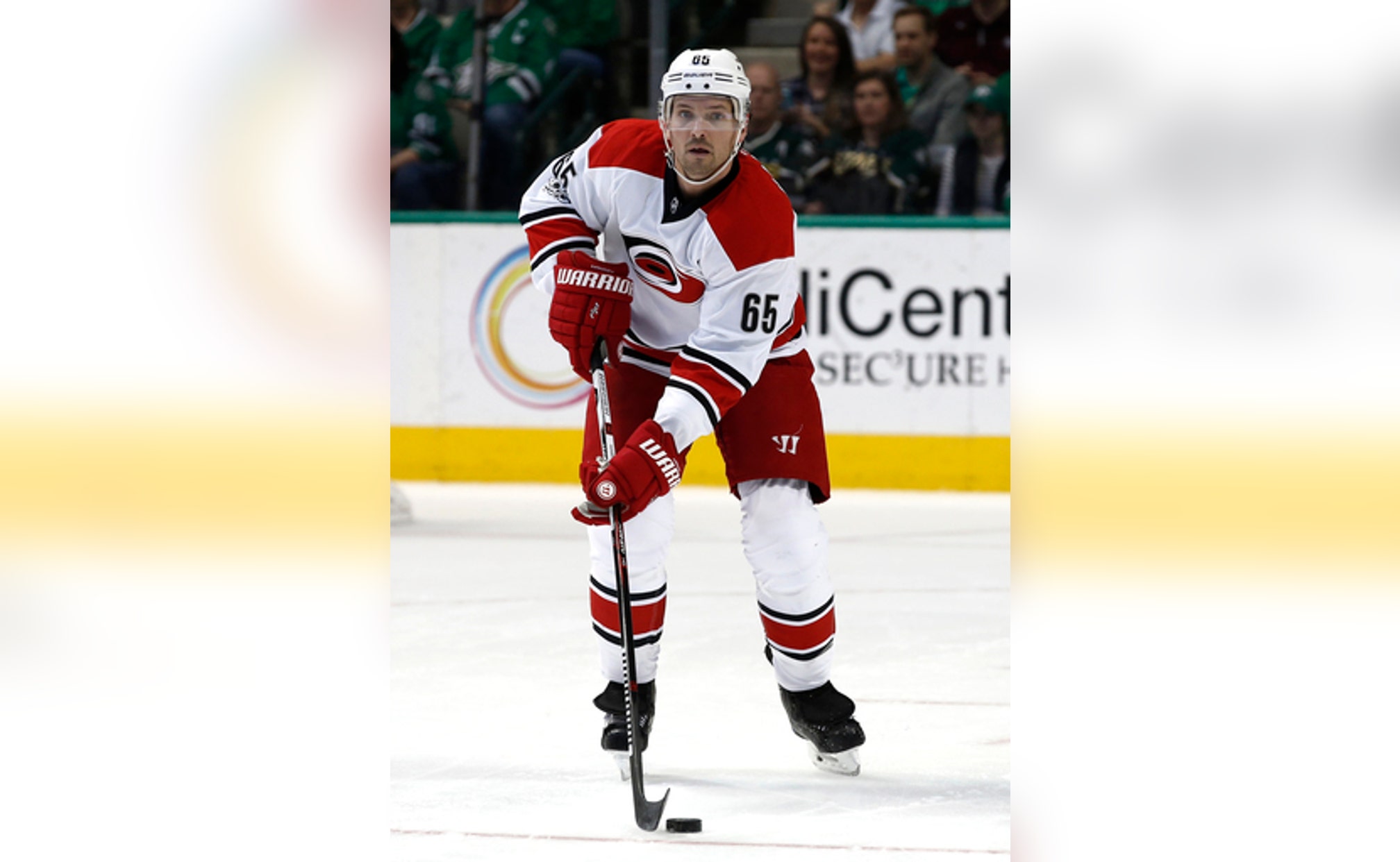 The Penguins acquired defenseman Ron Hainsey from Carolina on Thursday. Pittsburgh sent minor-league forward Danny Kristo and a draft pick to the Hurricanes in exchange for the 35-year-old Hainsey, whose long wait to play in the postseason may finally be over.

Hainsey is the NHL's longest-tenured player to never suit up in the Stanley Cup playoffs. Barring a massive collapse, he'll finally get the chance with the Penguins and can help provide a steady hand at a blue line dealing with a string of injuries.

Olli Maatta is out for at least a month after undergoing hand surgery. Trevor Daley is out six weeks after having arthroscopic surgery on his left knee. Justin Schultz is dealing with a concussion and even Kris Letang missed practice on Thursday and is day to day with an upper-body issue.

Enter Hainsey, who goes from last-place Carolina to the Penguins, who are five points behind Washington in the tight fight atop the Metropolitan Division.

''We think he plays a style of play that can fit into our group and he brings a skill set that is complementary to some of the guys we have,'' coach Mike Sullivan said.

Hainsey had four goals and 10 assists in 56 games this season for the Hurricanes and 49 goals and 201 assists in a 14-year career that spans 14 seasons and 891 games. On a team loaded with defensemen who don't hesitate to jump in the play - both Schultz and Letang rank in the top 15 in points by defensemen - Hainsey will play a more traditional role.

''He's a good penalty killer, he can skate and move the puck,'' said Rutherford, who was the GM in Carolina when the Hurricanes signed Hainsey in 2013.

Hainsey will be an unrestricted free agent after the season and the Penguins said Carolina will retain 50 percent of his remaining salary, which had to be part of the trade because the Penguins are up so tight against the NHL's salary cap. Hainsey signed a three-year deal in 2014 that pays him $2.83 million this season.

''If they don't take back what they did, there's no deal,'' Rutherford said.

Ideally Rutherford would like to add one more defenseman before next week's trade deadline, but added any maneuver would have to be ''creative'' because of the salary cap limitations. Rutherford downplayed again the possibility of moving goaltender Marc-Andre Fleury.

Fleury has taken on a backup role behind Matt Murray, making just five starts since Jan. 11. While Rutherford allowed there is a frustration level involved when you have two goalies capable of starting but only one playing regularly, he thinks Fleury can still be a difference maker for the Penguins.

''I'd prefer to keep him,'' Rutherford said. ''We play a lot of games in March. You don't know when players are going to get hurt. I'm going to have some communication with him between now and the deadline ...He could very well be part of our team going down the stretch.''

For the Hurricanes, the move came during their second five-game losing streak in the past five weeks. Since they were on the cusp of the playoff picture on Jan. 17, they have gone 3-9-1 to drop into last place in the Eastern Conference. They have not made the postseason since 2009, the longest active streak in the East.

Kristo, 26, has six goals and seven assists in 40 games in the AHL this season, playing for both St. Louis' affiliate in Chicago and the Penguins' minor-league team in Wilkes-Barre/Scranton.

Carolina also received Pittsburgh's second-round pick in the June draft. The Hurricanes have 10 draft picks, including six in the first three rounds.

Among the Hurricanes' other pending free agents are forwards Viktor Stalberg and Jay McClement and defenseman Matt Tennyson.

NOTES: Schultz skated with the rest of the team on Thursday but has not been cleared to play. The Penguins host Philadelphia in a Stadium Series game at Heinz Field, home of the NFL's Pittsburgh Steelers, on Saturday night.

Ron Hainsey
share story
those were the latest stories
Want to see more?
View All Stories
Fox Sports™ and © 2020 Fox Media LLC and Fox Sports Interactive Media, LLC. All rights reserved. Use of this website (including any and all parts and components) constitutes your acceptance of these Terms of Use and Updated Privacy Policy. Advertising Choices. Do Not Sell my Personal Info