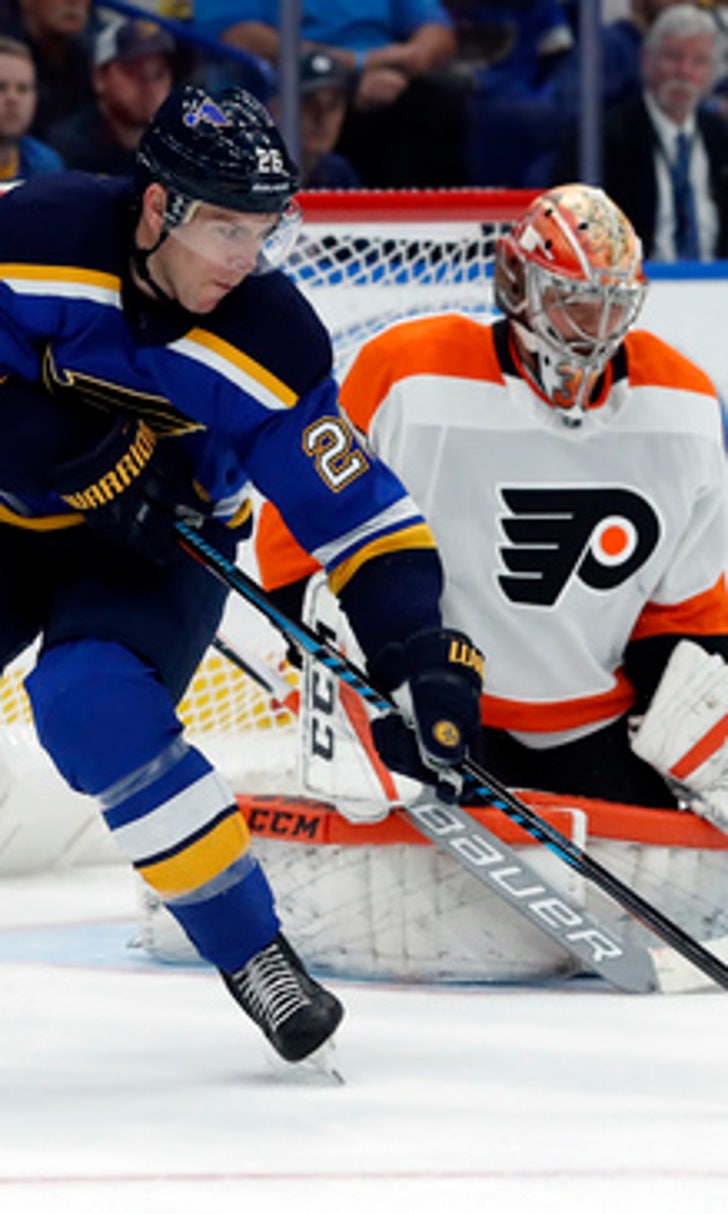 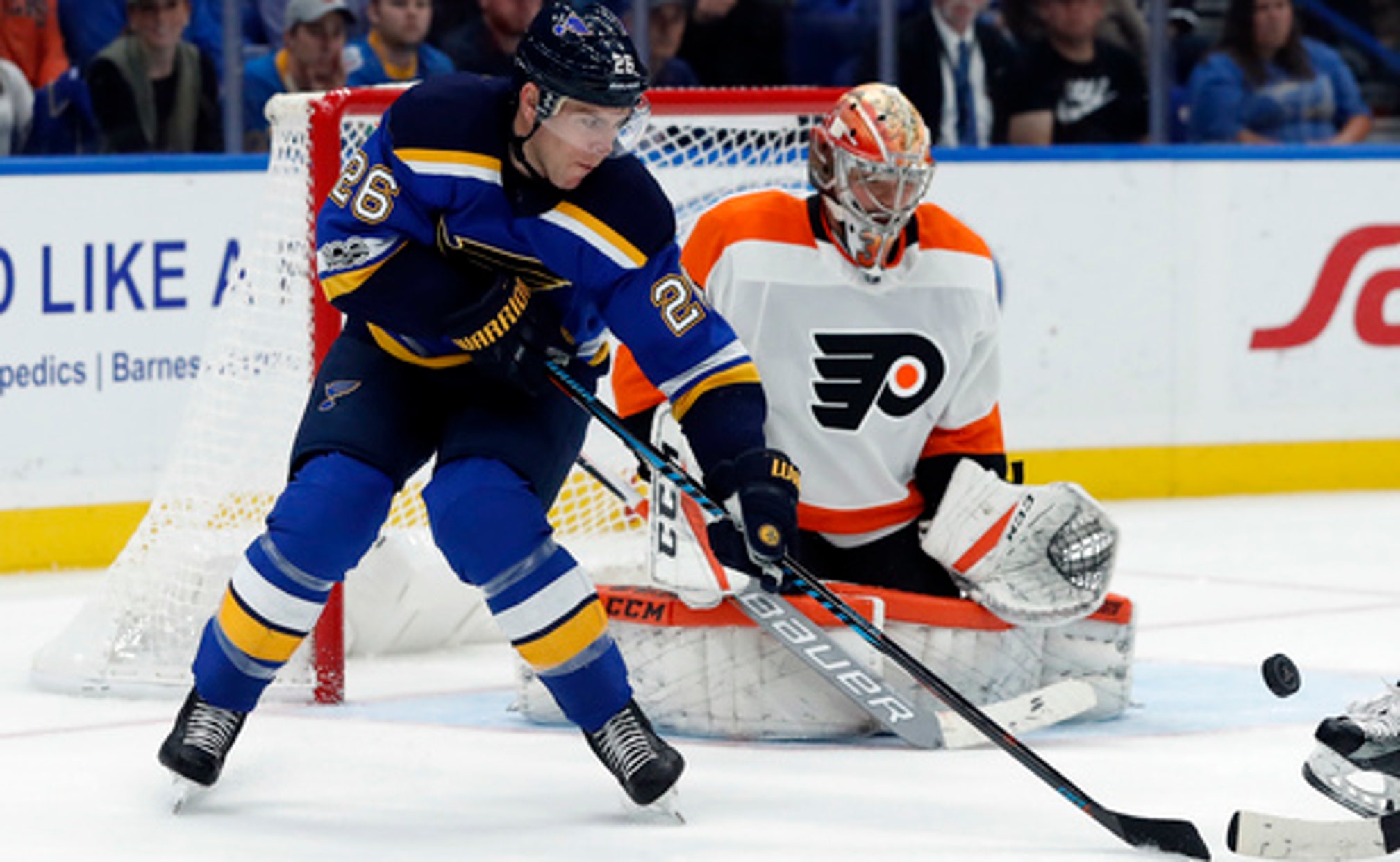 ST. LOUIS (AP) Michal Neuvirth made 33 saves and Brandon Manning broke a scoreless tie with a second-period goal to lead the Philadelphia Flyers over the St. Louis Blues 2-0 on Thursday night.

Claude Giroux added an empty-net goal with 5.4 seconds left in Philadelphia's first shutout of the season.

St. Louis lost at home for the first time after opening 5-0. The Blues, who earned at least one point in each of their previous seven games, were the only team in the league that hadn't been beaten at home.

Neuvirth, making his fifth start this season, recorded his 11th career shutout and first since Nov. 7, 2015.

WASHINGTON (AP) - Lars Eller scored two goals, including the winner, and had an assist to Washington beat New York.

Eller was arguably the best player on the ice, drawing two penalties and committing one as part of an eventful outing. The Danish center's play helped Washington escape despite being outshot 38-19 and 16-2 in the third period.

Braden Holtby made 35 saves, including many in the third while the Islanders were pouring it on. Taylor Chorney and Alex Chiasson each scored his first goal of the season for the Capitals.

New York's Anders Lee scored twice and John Tavares got his 12th goal of the season, one behind Tampa Bay's Nikita Kucherov for the NHL lead. Jaroslav Halak made 15 saves.

Kuraly got to a rebound during a scrum in front of the Vegas net after a shot by Torey Krug with 10:07 left, restoring Boston's lead and helping the Bruins to avoid being swept by the expansion Golden Knights in their inaugural season. It was the second assist of the night for Krug, who helped set up Reilly Nash's goal early in the second for Boston, which was coming off consecutive losses in overtime and a shootout.

Cody Eakin scored for Vegas, which fell to 0-3 on a six-game road trip out East.

Maxime Lagace, making his second NHL start, had 26 saves for the Golden Knights, who beat Boston 3-1 on Oct. 15 in the first meeting between the expansion club and the Original Six franchise.

Laine's goal came after he told reporters at the morning skate that he didn't have a lot of confidence and felt he couldn't do many ''positive things'' on the ice. He has five goals and two assists in 12 games.

ST. PAUL, Minn. (AP) - Matt Cullen scored his first goal of the season on his 41st birthday and added an assist during Minnesota's three-goal first period, giving the sputtering Wild a welcome spark.

Nino Neiderreiter and Tyler Ennis also scored to send struggling Canadiens goalie Carey Price into the first intermission with a 3-0 deficit. Ryan Suter chipped in a second-period goal, and Jared Spurgeon scored on a power play for more insurance in the first minute of the third.

Mikko Koivu and Mikael Granlund each had two assists and Marcus Foligno added an empty-net goal for the Wild, who have won six straight games against the Canadiens while outscoring them 25-9.

Boone Jenner, Tyler Motte and Markus Hannikainen also had goals for the Blue Jackets, and Sergei Bobrovsky made 31 saves. Seven goals are a season-high for Columbus, which won for the eighth time in 11 games.

Vincent Trocheck had a goal and two assists for the Panthers. Ian McCoshen and Mark Pysyk also scored. James Reimer allowed four goals on 19 shots before being replaced by Antti Niemi at 10:46 of the second period. Niemi stopped 18 shots.

Yanni Gourde had a goal and Vasilevskiy made 33 saves for the Lightning. Vasilevskiy had won nine consecutive decisions.

OTTAWA, Ontario (AP) - Mark Stone had a goal and an assist and Craig Anderson made 24 saves in Ottawa's 3-1 victory over Detroit.

Alex Burrows and Nate Thompson also scored to help the Senators rebound from an 8-3 home loss to Montreal on Monday night.

Jimmy Howard made 27 saves, and Anthony Mantha scored for Detroit.

Gabriel Landeskog and Mikko Rantanen also scored in the second for Colorado. Carl Soderberg added a goal, and Patrik Nemeth got his first NHL goal as the Avalanche improved to 5-1 at home.

Varlamov rebounded from a forgettable game in which he allowed seven goals at Vegas last week. He preserved a 5-3 lead in the third by turning back 22 shots.

Victor Rask scored 55 seconds into the game for Carolina, which outshot the Avalanche 60-27. Elias Lindholm and Derek Ryan also had goals.

Giordano fired a perfect shot over Tristan Jarry's glove off a pass by Matthew Tkachuk.

Sean Monahan also scored for the Flames, who are 2-1-0 during a seven-game homestand.

Patric Hornqvist had the goal for Pittsburgh, and Jarry made 32 saves in his first start this season. The Penguins are 1-2-1 on a five-game trip.

GLENDALE, Ariz. (AP) - Benoit Pouliot had two goals and an assist as Buffalo held off Arizona.

Kyle Okposo had a goal and an assist to help the Sabres build a 5-1 lead in the third period in a matchup between the worst teams from each conference. But the Coyotes scored three times in the final eight minutes, pulling within one on Christian Dvorak's goal with an extra attacker and 52 seconds left.

Dvorak's goal came after Zac Rinaldo and Nick Cousins each scored in the third to give the Coyotes a chance, but they couldn't get anything else past Robin Lehner.

Seth Griffith and Evander Kane both scored for Buffalo, which has won three of five after an 0-4-1 start. Lehner stopped 25 shots.

Arizona had No. 1 goalie Antti Raanta back after he missed nine games with a lower-body injury. Raanta made 26 saves and Oliver Ekman-Larsson also scored for the Coyotes, who have the NHL's worst record at 1-12-1, including 0-6-1 at home.

Amadio, Michael Cammalleri and Trevor Lewis scored during a three-goal first period for the Kings. Jonathan Quick made 33 saves as they pulled even with St. Louis atop the Western Conference standings.

Los Angeles was up 5-0 late in the second before Auston Matthews scored on his first career penalty shot.

Morgan Rielly and Connor Brown also scored for the Maple Leafs, who have lost four of five. Matthews got a second penalty shot in the final minutes after Los Angeles defenseman Jake Muzzin knocked the net off its moorings, but Matthews missed the net.

Curtis McElhinney stopped 23 shots in his second appearance of the season.