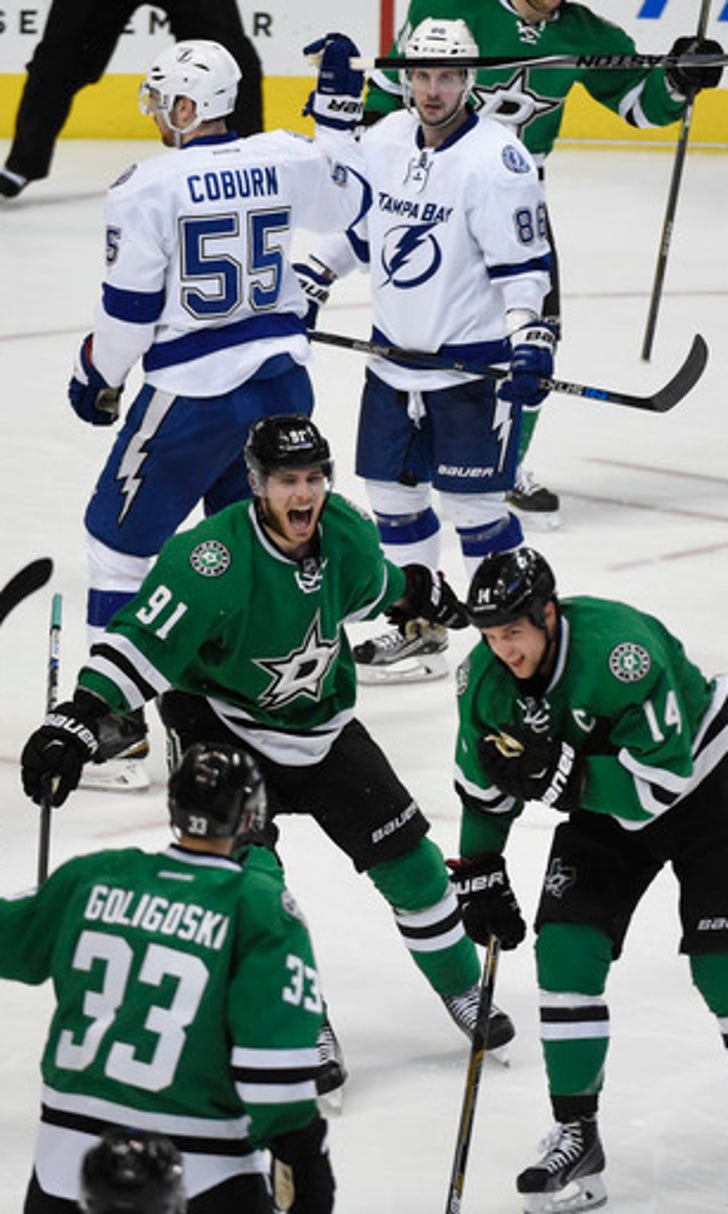 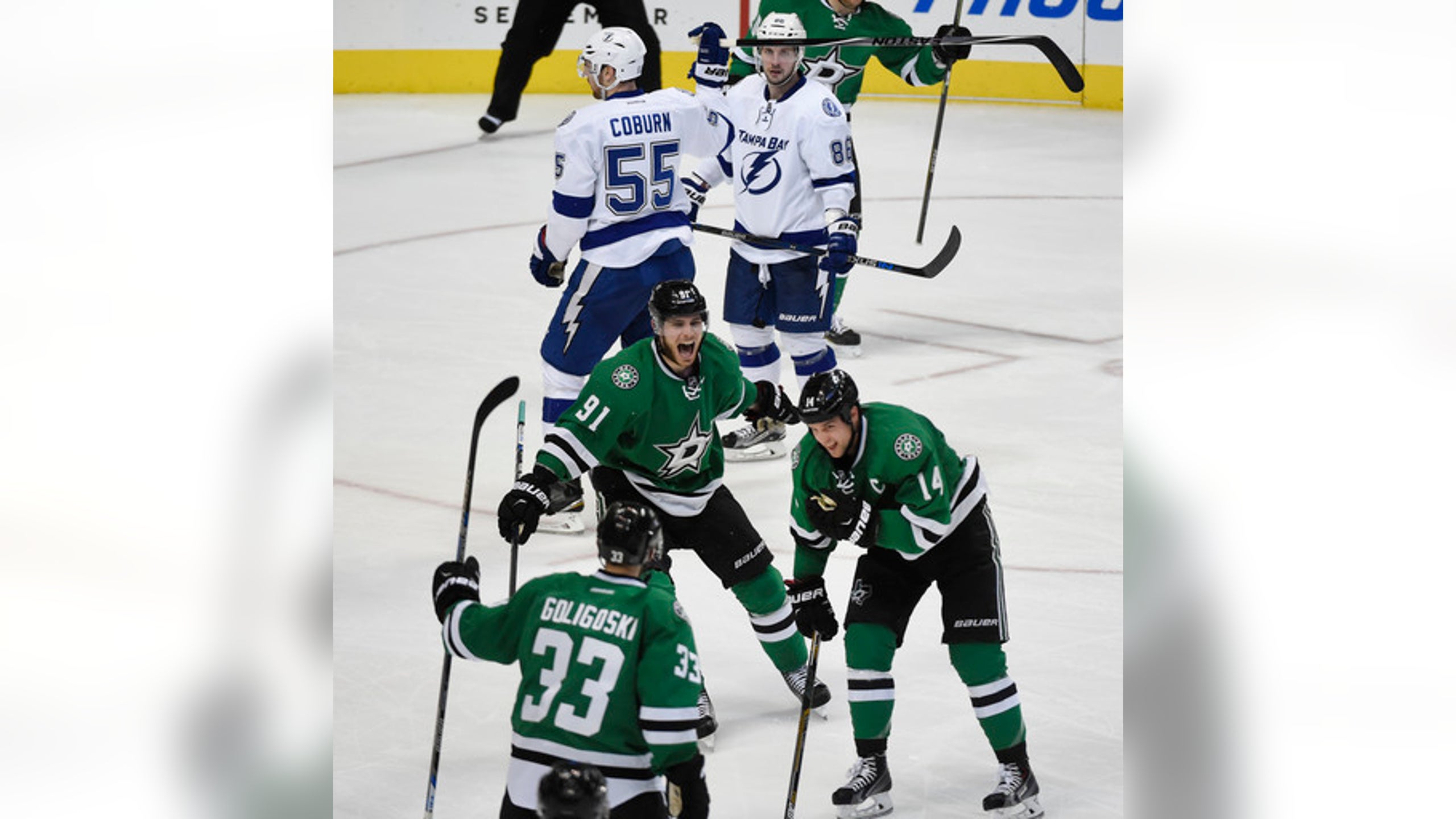 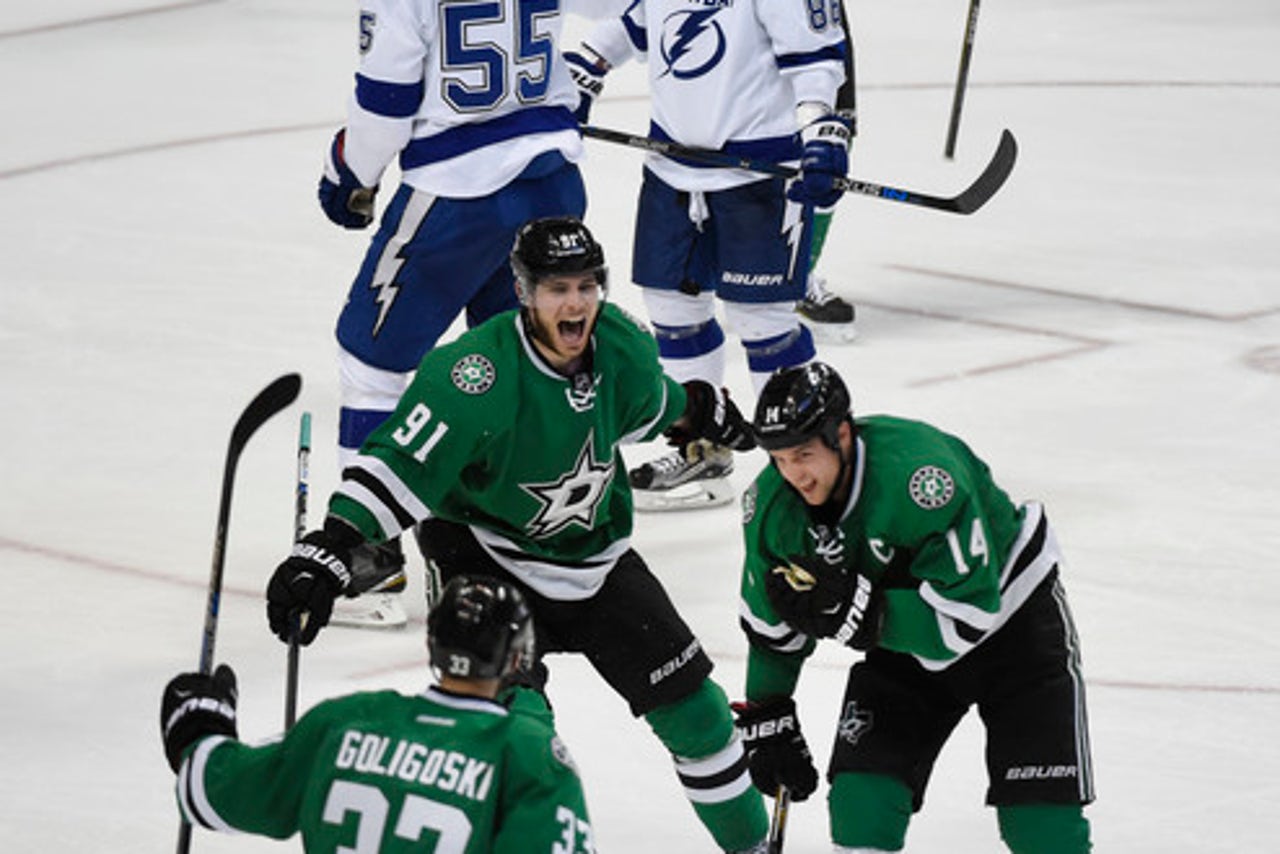 A few hours later, Benn had a more important tribute for the man he replaced as captain of the Dallas Stars, with Morrow watching from a suite as video tributes played throughout the game.

Benn scored two goals for a career-best 36 this season, including the winner during a third-period rally, and the Stars took sole possession of first place in the Western Conference with a 4-3 victory over the Tampa Bay Lightning on Thursday night.

''I definitely still try to play like him a bit, throwing the body around,'' Benn said. ''I think you've seen it in all the highlights that were shown tonight that he's the true definition of a warrior. He was a player that led by example and didn't talk too much, kind of like myself.''

Benn's winning goal 11:50 into the third period came about 2 minutes after Stephen Johns' first NHL goal as the Stars dropped the Lightning to 31-2-0 when leading after two periods.

''If it would have been one of our other defensemen, it would have been a lift,'' Stars coach Lindy Ruff said Johns' goal. ''But for a young guy like that to get his first, and for it to be that big a goal, I thought the building had a little extra in it for us.''

Dallas (93 points) is two points ahead of St. Louis atop the West. Both teams have 10 games remaining.

Steven Stamkos had two goals for the Lightning (85 points), who stayed in third in the Atlantic Division and fell four points behind division-leading Florida, a 4-1 winner at Toronto.

The rare blown lead by the Lightning led to their fifth loss in six games since a nine-game winning streak.

''We played like a fragile team that was scared to lose and not hungry to close out a game or hungry to win a game,'' said Stamkos, who had a pair of goals in a loss to Dallas early in the season. ''We can't let that fear of losing creep in at this time of the year.''

Cody Eakin assisted on both third-period goals for Dallas and had a career-high three for the game.

Shortly after Johns scored on a low shot from near the blue line that slipped under Ben Bishop's right leg, Benn put a backhander past Bishop after a give-and-go with Eakin, who took the first pass behind the end line and immediately got it back to Benn.

Benn, who also had an assist, topped his previous career high of 35 goals from last season, when he won the Art Ross Trophy as the NHL's leading scorer.

Trailing 3-2 and in danger of a third straight loss since beating Chicago with the West lead on the line, the Stars dominated the final period, outshooting the Lightning 17-4. Kari Lehtonen finished with 17 saves for his fourth win in six starts.

''Extremely disappointing, especially the way we played for two periods,'' Tampa Bay coach Jon Cooper said. ''We walk in there for a 15-minute break and come out and play the way we did is, it's a little puzzling to be honest.''

Stamkos put the Lightning ahead 3-2 in the second period when he redirected a pass from Alex Killorn, who had two assists.

Jason Spezza scored first for Dallas, giving him a goal in seven of the past eight games. He skated ahead of the pack before his shot was initially stopped by Bishop, but the goalie couldn't control it as it bounced over him and slid into the net.

Stamkos gave Tampa a 2-1 lead early in the second period when he ended the team's drought of 20 straight power plays without a goal and snapped a Dallas streak of 21 consecutive penalty kills.

Benn pulled the Stars even less than 3 minutes later by grabbing an errant pass in his offensive zone with the Lighting in transition, turning and beating Bishop over the shoulder.

NOTES: Ruff said F Tyler Seguin had a cut on his left leg and would be re-evaluated Friday. ... Stamkos has a team-leading 33 goals for Tampa Bay. ... Dallas F Patrick Sharp had a quiet return after missing six games with a lower-body injury. He didn't have a shot in 14 minutes.