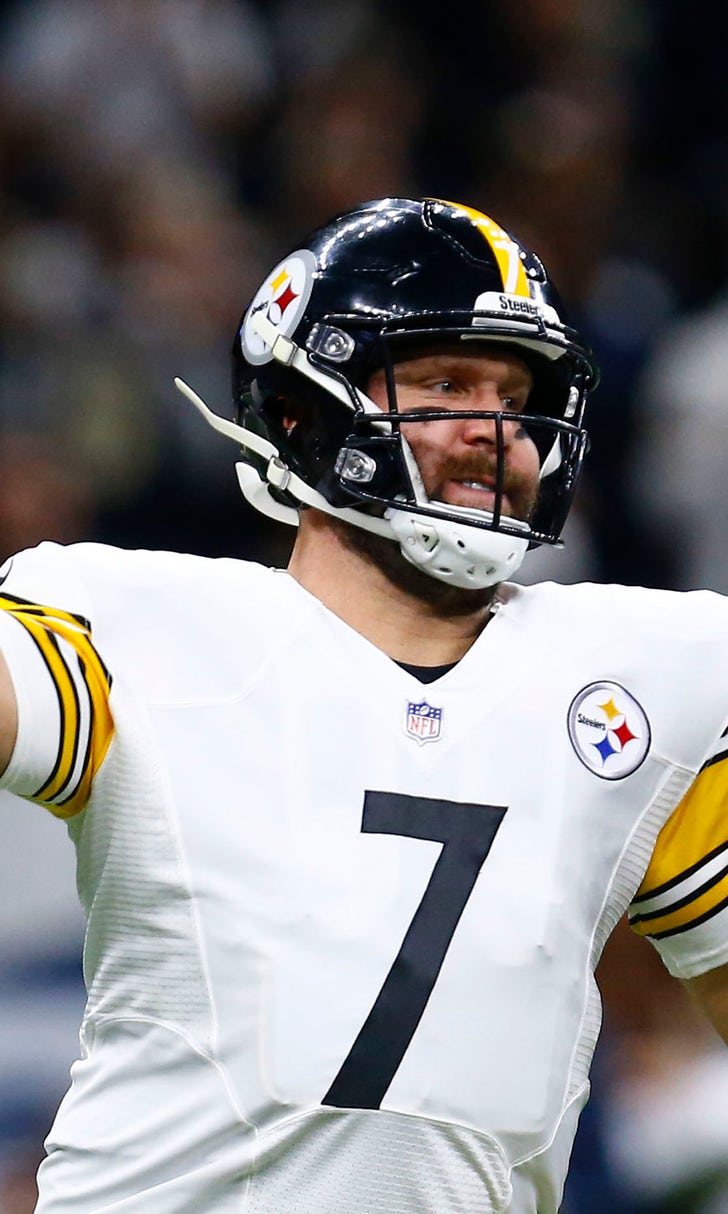 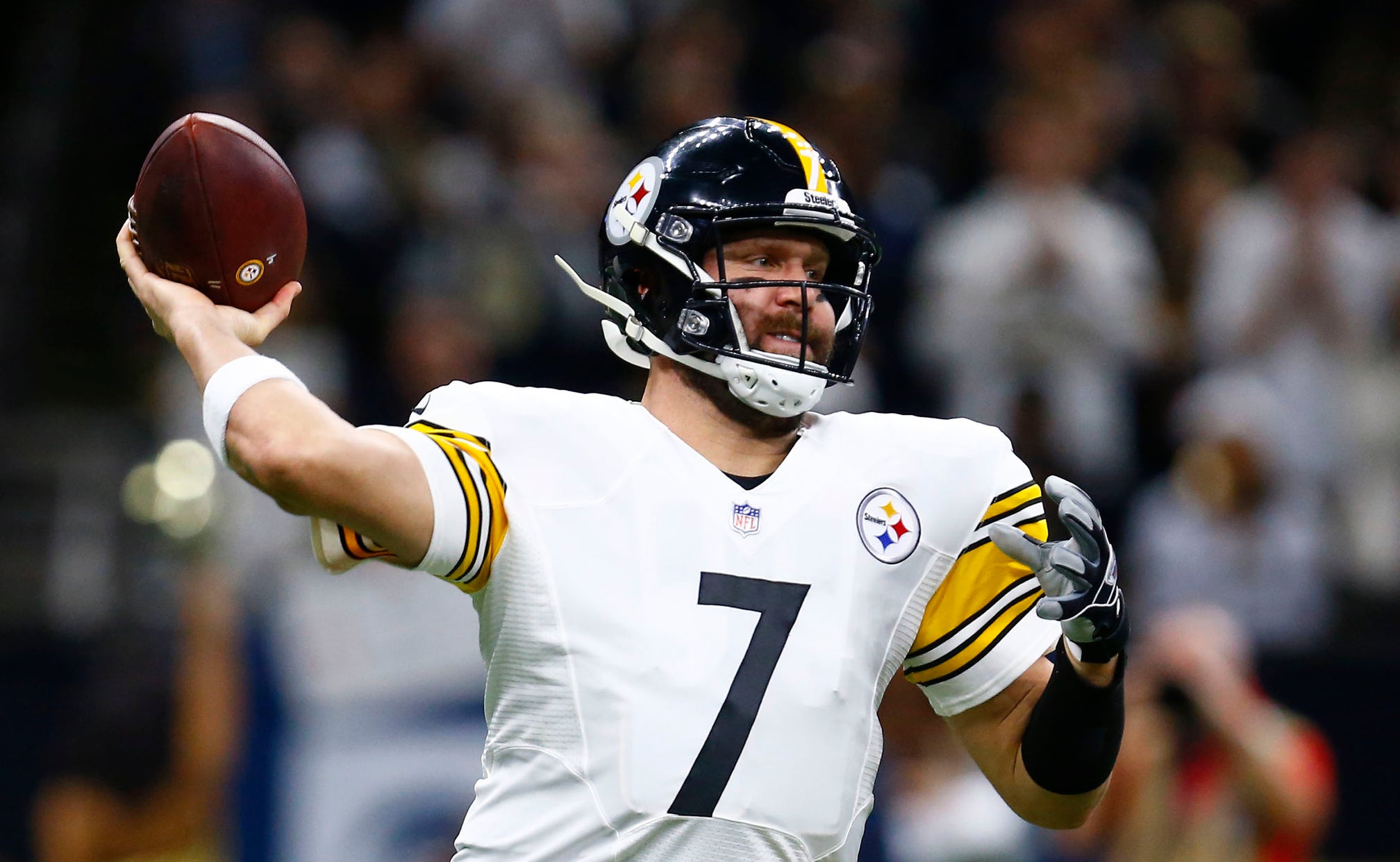 Steelers hope for a win (and some luck) vs. Bengals

PITTSBURGH (AP) — Pittsburgh Steelers wide receiver Antonio Brown is modifying his jersey, using a marker to add an "s" to the end of his last name.

Safety Sean Davis is mulling a present or two to Cleveland quarterback Baker Mayfield, promising to send the rookie "a little something something" if the Browns can beat the Baltimore Ravens on Sunday and open the door for the Steelers to win a third straight AFC North title.

"Pray for Cleveland," Davis said with a smile. "Pray for the Browns."

First things first, however. The only way the outcome in Baltimore matters to the Steelers is if Pittsburgh (8-6-1) manages to get by reeling Cincinnati (6-9).

The two games between the four division rivals will unfold simultaneously, but the veteran Steelers are cautioning it's unwise to get caught watching the scoreboard and ignoring the play right in front of you.

"It's out of our control," Pittsburgh guard David DeCastro. "You're going to feel a lot worse than you do now if you were to go out there and see Baltimore lose and us lose too. It's definitely deflating (to be in this position). It's been a long season. We've put forth a lot of effort."

Just not enough to stem a late swoon that's left the Steelers' postseason chances precarious at best. Pittsburgh has dropped four of five since its 7-2-1 start, all four losses coming during games the Steelers led in the second half, the latest a 31-28 defeat on the road in New Orleans last Sunday that dropped Pittsburgh to second place behind the Ravens.

The game followed a troubling pattern for the Steelers. Pittsburgh moved the ball only to make critical mistakes at critical times. The Steelers' final three possessions against the Saints ended with two fumbles and a fake punt that ended up a half-yard short of a first down.

Throw in a pair of questionable pass interference calls against cornerback Joe Haden — both of which set up New Orleans touchdowns — and the Steelers find themselves in danger of missing the postseason for the first time since 2013.

"We're all aware of the situation," center Maurkice Pouncey said. "We know what we've got to do and hopefully it works out."

Any shot at the Bengals returning to the playoffs ended weeks ago, their season undone by injuries — namely to quarterback Andy Dalton and wide receiver A.J. Green — and a defense that ranks as the worst in franchise history. The main question heading into the finale is whether this is head coach Marvin Lewis' final game.

The Bengals haven't reached the postseason since 2015, though Lewis said he doesn't believe the outcome on Sunday will have any effect on his future.

Players are waiting to see how it shakes out.

"People ask me, 'Is Marvin going to be back?' — just people out there in the world," defensive end Jordan Willis said. "And I'm like, 'I have no idea.' My dad had to tell me the (defensive) coordinator was fired, and he's in Kansas City. He called and told me that Teryl Austin was fired. So that just goes to show how much we know and don't know as players."

THE LONG AND WINDING ROAD

The Bengals wrap up one of their most disappointing seasons under Lewis. They started 4-1 and could have taken control of the division by holding on to beat Pittsburgh on Oct. 14, but Brown turned a short pass into a 31-yard touchdown with 10 seconds left for a 28-21 win that started the plummet — eight losses in the past 10 games. After surging ahead of the AFC North to start the season, they're finishing at the bottom of the division for only the second time under Lewis.

"It's been a roller-coaster season, for sure," cornerback Darqueze Dennard said. "We definitely thought it would be a different season."

The Bengals knocked the rival Ravens out of the playoffs with a 31-27 win in Baltimore last year, opening a spot for Buffalo to make the postseason. Now they're in position to end Pittsburgh's season, but there's a big difference from last year's finale. Cincinnati has 15 players on injured reserve. Backup quarterback Jeff Driskel completed only 2 of 6 passes for 3 yards in the first half of a 26-18 loss at Cleveland last Sunday, an indication of how far they've fallen.

They're more focused on simply playing well against the Steelers, who have won seven straight and 10 of 11 in the series.

"I don't think it has much to do with the spoiler role," quarterback Jeff Driskel said.

Ben Roethlisberger can become the first quarterback in franchise history to lead the NFL in passing yards if he maintains his lead over Kansas City's Patrick Mahomes.

Roethlisberger, who shared the passing title with New Orleans' Drew Brees in 2014, has 4,842 yards through 15 games, 26 yards ahead of Mahomes.

Roethlisberger's 33 touchdown passes this season are a franchise record, as are his 421 completions. The 36-year-old Roethlisberger — who has flirted with the idea of retirement in the past — plans to return in 2019.

DeCastro believes Roethlisberger is throwing the ball as good as ever, adding the quarterback's prolific output is also part of a collaborative process.