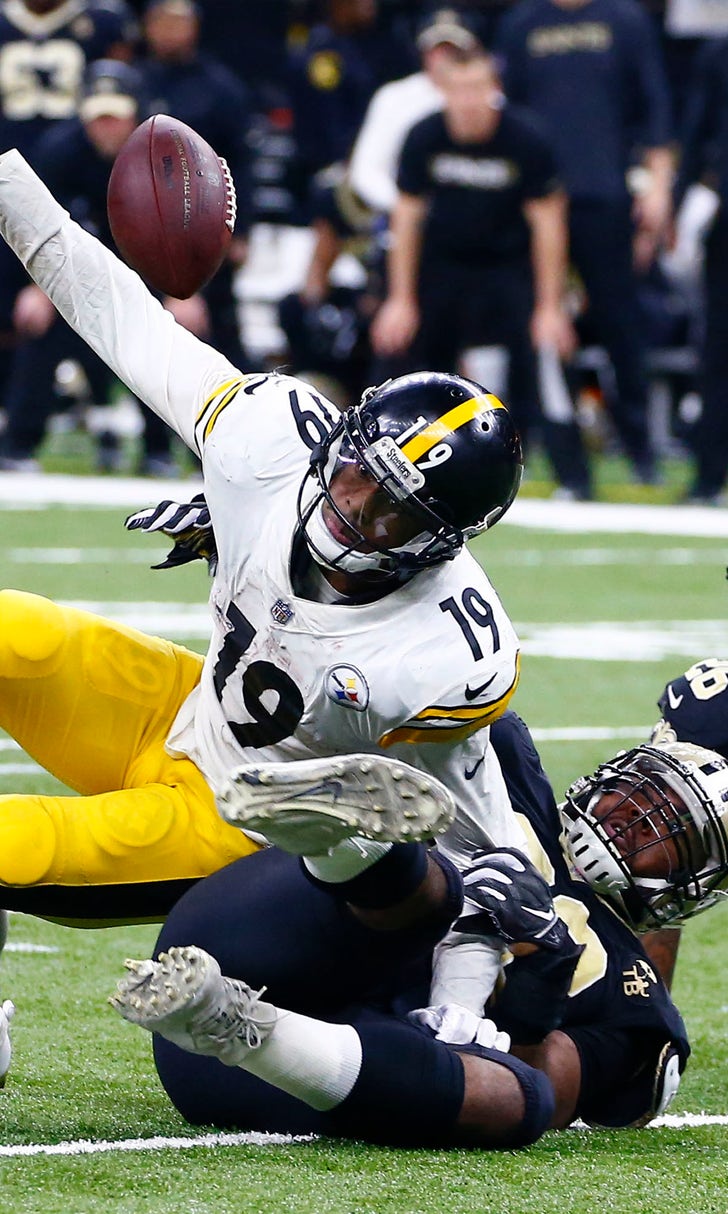 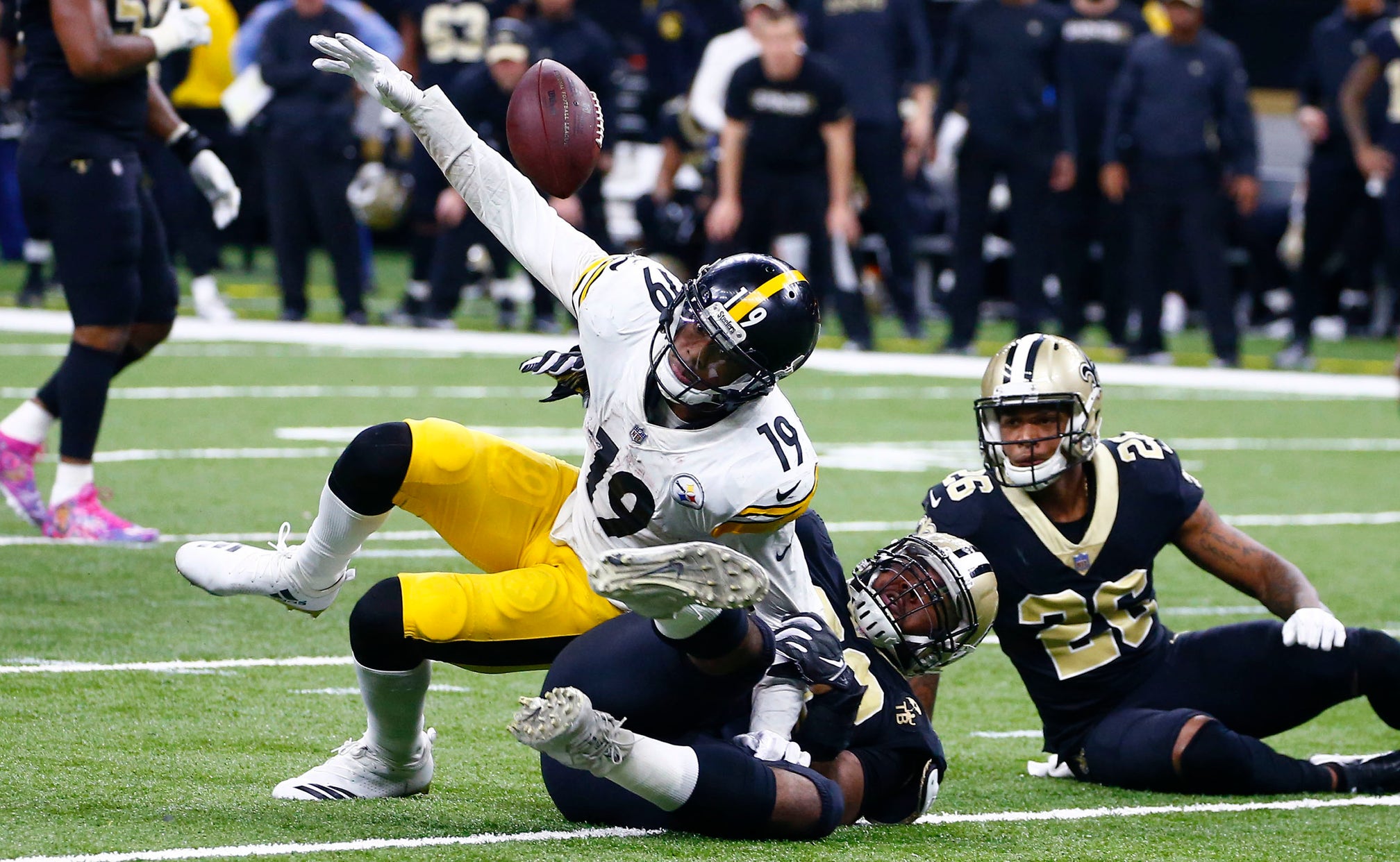 NEW ORLEANS (AP) — Desperately needing a win, Pittsburgh coach Mike Tomlin went for the jugular with a fake punt call late in the fourth quarter against the Saints.

Upback Roosevelt Nix came up just short, and so did the Steelers in an excruciating, infuriating 31-28 loss Sunday that may strangle their playoff hopes.

"I just wanted to be aggressive," Tomlin said, adding that he had confidence in the play call and figured there was enough time left for his offense to get the ball back with time to score if it failed.

He was partly right.

The failed fake allowed New Orleans to take over at the Pittsburgh 46 with 4:01 left. Soon after, the second of two critical fourth-down pass interference calls on cornerback Joe Haden set up the Saints for the winning touchdown, a 2-yard pass from Drew Brees to Michael Thomas with 1:25 left.

"We had clear opportunities to win the game and we didn't seize those moments. That is what good teams do," defensive lineman Cameron Heyward said. "I think we are good team, but we have to make those critical adjustments."

To claim the AFC East, Pittsburgh (8-6-1) needs to beat Cincinnati next Sunday and have Baltimore (9-6) lose at home to Cleveland. Failing that, the Steelers would need the unlikely scenario of an Indianapolis-Tennessee tie to earn a wild card.

"You can be as skillful as you want on both sides of the ball and special teams, but there is still a small element of luck involved in football," Pittsburgh quarterback Ben Roethlisberger said. "It's a play here, a play there."

The Steelers have come up a play short too often down the stretch, losing four of their last five by a total of 16 points.

Even after the go-ahead touchdown, they were driving into field goal range when receiver JuJu Smith-Schuster fumbled at the New Orleans 34. That play ended their hope to stay atop the AFC East even though Roethlisberger threw for 380 yards and three touchdowns, Antonio Brown had 14 catches for 185 yards and two scores, and Smith-Schuster added 11 receptions for 115 yards.

"It's tough to go out like that," Smith-Schuster said. "I got tackled, I fumbled, game over. I was just trying to get down. They made a good play."

The Steelers were much less sure about the penalties on Haden. He was flagged for interference in the end zone in the first quarter after a fourth-down heave from Brees to running back Alvin Kamara sailed over both of their heads, leading to Mark Ingram's 1-yard touchdown run.

"I don't know what they saw," Haden said. "I just tried to jump up and go get the ball."

The second flag came when he defended Saints receiver Michael Thomas aggressively on a fourth-and-2 pass that hit the ground, prolonging the winning drive.

"It's an offensive game," Haden said. "You can't touch these guys. It's tough being a defensive back. It's unfortunate. I'm very frustrated. This means a lot to me. I come out here, bust my tail and try to play good defense."

The Steelers fought back from deficits in both halves. Trailing 14-6, they converted four third downs on a 15-play, 97-yard drive that ended with a 3-yard scoring toss to uncovered running back Jaylen Samuels and a 2-point conversion to tie the score 40 seconds before halftime.

After they fell behind 24-14 in the third quarter, Roethlisberger led back-to-back touchdown drives of 75 and 66 yards to put the Steelers ahead 28-24.

But their last three possessions ended in a fumble by Stevan Ridley, the failed fake punt and Schuster's fumble.

"I didn't even know it was coming," Roethlisberger said of the fake punt, on which Nix took the snap, stepped to his right and tried to run through the middle. "I turned around just in time to see it. There's obviously a reason that he called it, but I don't really know what was going on."

The Steelers, who beat New England at home last week, almost captured a second big win in a row against the Saints (13-2), who clinched home-field advantage throughout the NFC playoffs.

Now Pittsburgh is looking up at the Ravens in the AFC East for the first time since October.

"All we have is a chance," Heyward said. "We just have to go play Cincinnati this week and get a win. You never know what can happen."