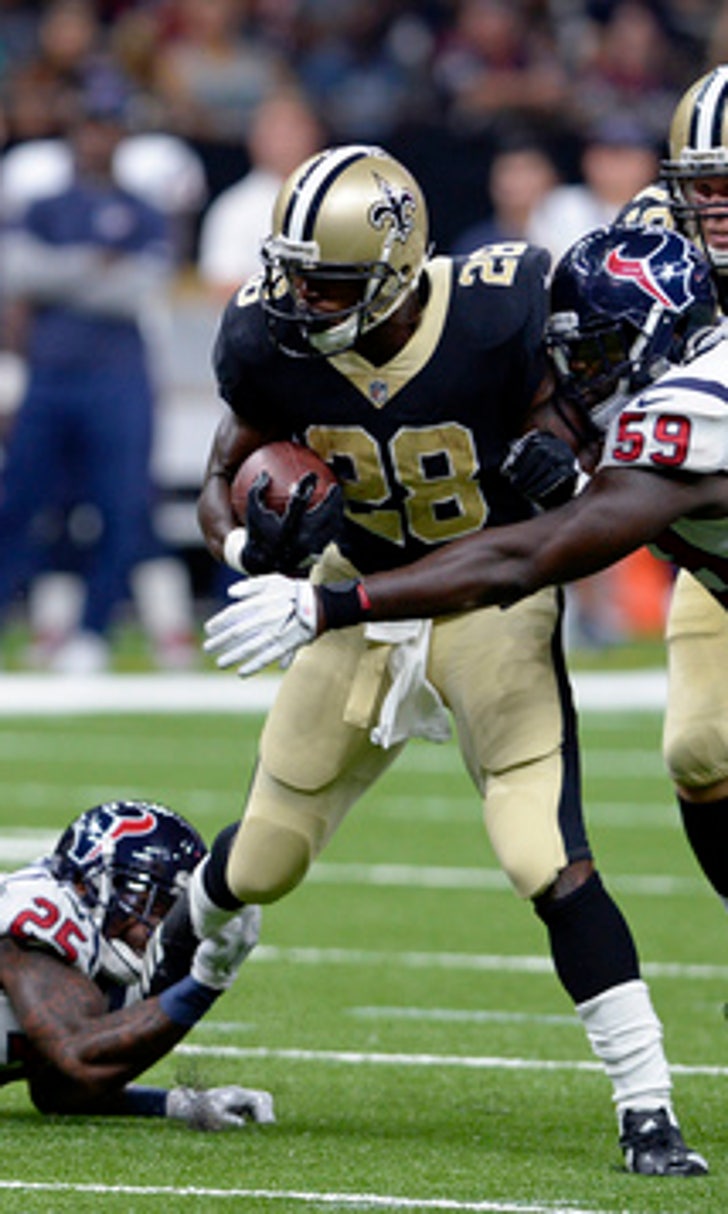 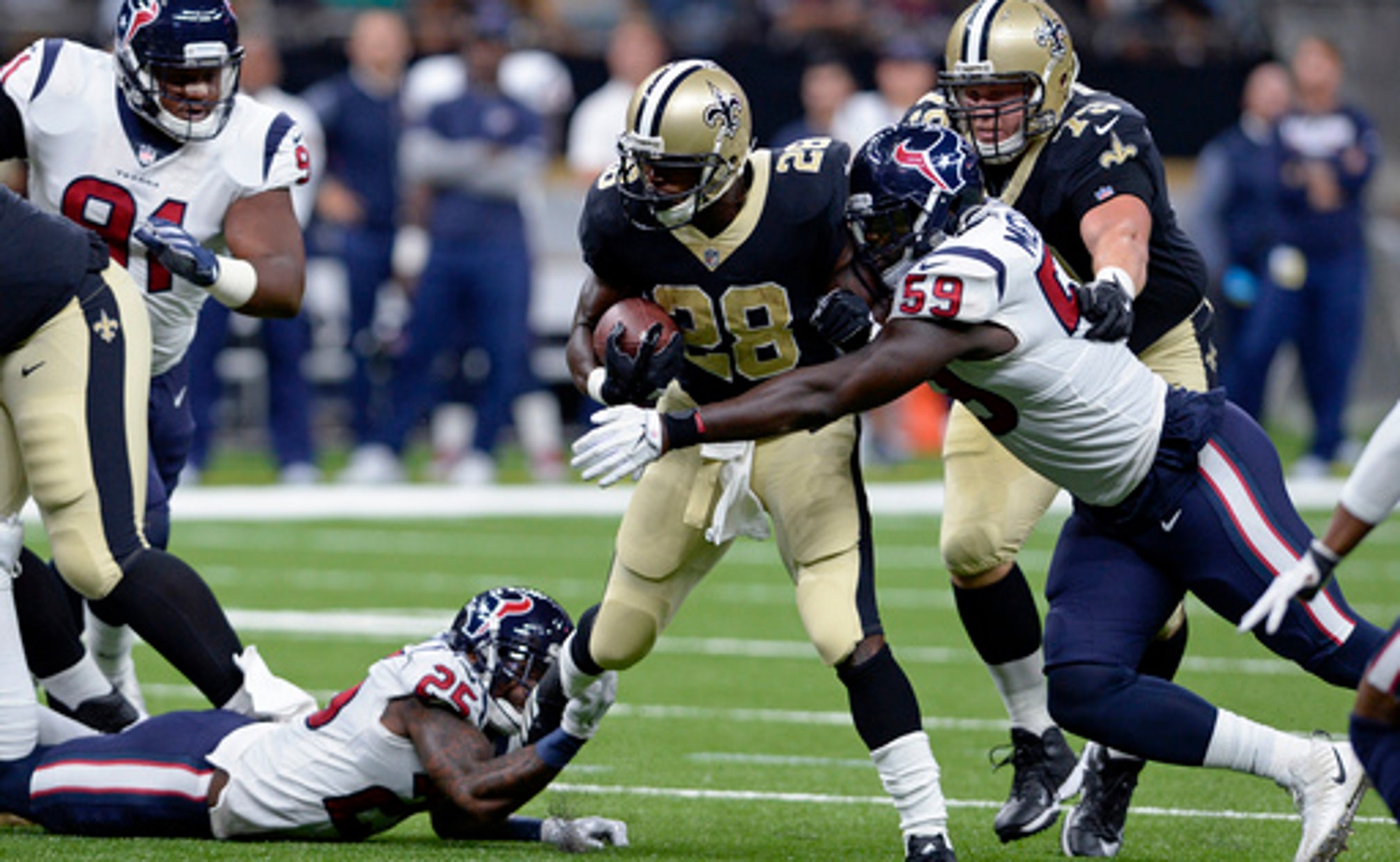 METAIRIE, La. (AP) Adrian Peterson suggests it is ''crazy'' to assume he isn't still one of the best running backs in the NFL just because he's 32 years old and has had two knee surgeries.

In a few days, the new Saints running back gets his chance to demonstrate his point against the team that let him go in the city where he became arguably the best ball carrier of his generation.

''I'm pretty excited about it - just trying to keep myself calm until Monday night comes around,'' said Peterson, who spent all of his previous 10 seasons with the Minnesota Vikings. ''I'm looking for amazing things to happen for me and our team.''

Peterson's logic is ''just based on the work that I put in and just honestly the God-given ability I've been blessed with.''

The Saints have been relatively cautious with Peterson, who missed most of last season while recovering from surgery to repair a torn meniscus. He played only a few snaps in the preseason, with just a handful of carries for 2 to 3 yards each and one screen pass that lost a yard.

Last year's knee surgery was his second. Then again, his career-best 2,097 yards rushing in 2012 came one year after his first knee surgery, an ACL reconstruction.

Peterson also likes to point out that he led the NFL with 1,485 yards rushing in 2015, ''behind a mediocre offensive line,'' he added, after missing 15 games the previous season, when he was dealing with the legal and public relations fallout from his use of force to discipline his then-4-year-old son.

With his first Saints camp under his belt, Peterson asserts, ''I'm back and I'm healthy.''

''It's just always crazy sitting back and seeing how, just because, you know, I'm 32 now, people say, `Oh, well, he's losing it because this back or that back lost it around that time,''' Peterson said after practice Thursday . ''But you erase the (2015) season when I came back after sitting out for a year and led the league in rushing.''

Peterson also noted that while the type of meniscus surgery he had typically requires about six months' rehabilitation, he spent $10,000 per week of his own money for special treatments that helped accelerate his recovery so that he could try to play late last season. He got back for one game in mid-December, but with Minnesota out of the playoffs and a groin injury surfacing, he was taken out of the lineup again for the final two games.

''I didn't leave anything on the table,'' Peterson said. ''I gave it my all, with everything that I did.''

Peterson signed his free-agent contract with New Orleans shortly after the NFL schedule came out, pitting the Saints against Minnesota in Week 1. But Peterson noted that the deal was virtually done before the schedule was released, and only technical contract language remained to be hashed out.

Peterson maintains that he was willing, after last season, to try to work out a new deal to stay in Minnesota after it became clear the Vikings wouldn't exercise his $18 million option , but took the Vikings' signing of Latavius Murray as his cue to look for a new team.

''For me to have an exit meeting and the next time I talked to them I was getting a call at 1 o'clock in the morning saying we're signing Latavius Murray, that's no ego blow for me,'' Peterson said matter-of-factly. ''For me, that's motivation. Congratulations. Now I can move on and take my abilities somewhere else.''

He has taken them to a team that won't need him to be the workhorse he's been since his rookie season out of Oklahoma in 2007, when he set the NFL single-game rushing record with 296 yards. Now he's in the backfield with a record-setting quarterback in Drew Brees, who led the NFL in passing last season for a record seventh time.

Peterson describes the breadth and intricacies of Saints coach Sean Payton's playbook as ''something I have never seen.''

''I'm sure I'll have my opportunities,'' Peterson said. ''But when you have that many playmakers, you have to put them in the game.''

And while Peterson doesn't hide his eagerness to make his Saints debut in Minnesota, he said he still very much appreciates his time there, expects to one day be in their ring of honor and is even looking forward to receiving in his Minneapolis hotel room some chocolate chip cookies a particular fan who has long baked for the Vikings, and who said she would leave some for him this year as well.

Peterson added that as long as the Saints win, he doesn't really care how they do it, adding that he doesn't want to his highly hyped return to Minnesota to be a distraction for his team.

For their part, his teammates don't seem to mind.

''No matter how much you want to play that down, he's one of, if not the greatest player in that organization's history and they made a decision to let him go and we were fortunate enough to grab him,'' right tackle Zach Strief said. ''I don't know that there's grudges held, but I think it would be inhuman not to have a desire to play well against your former team. ... We're excited to get to go out and play with him.''