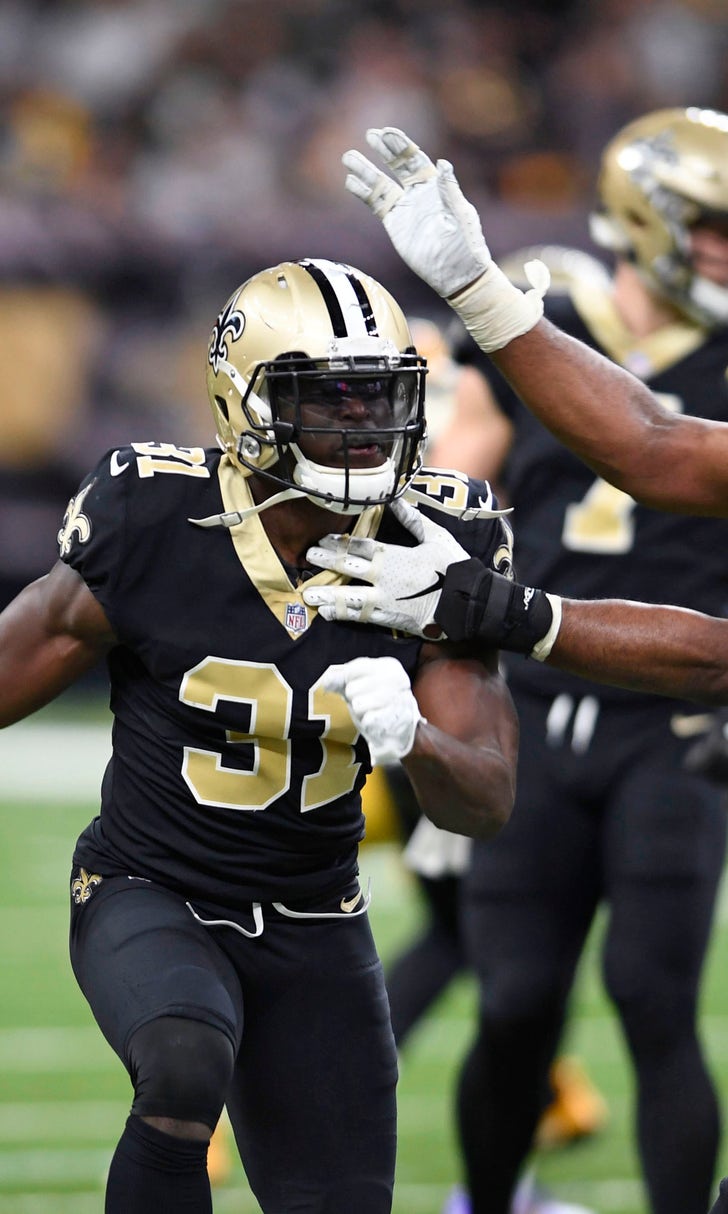 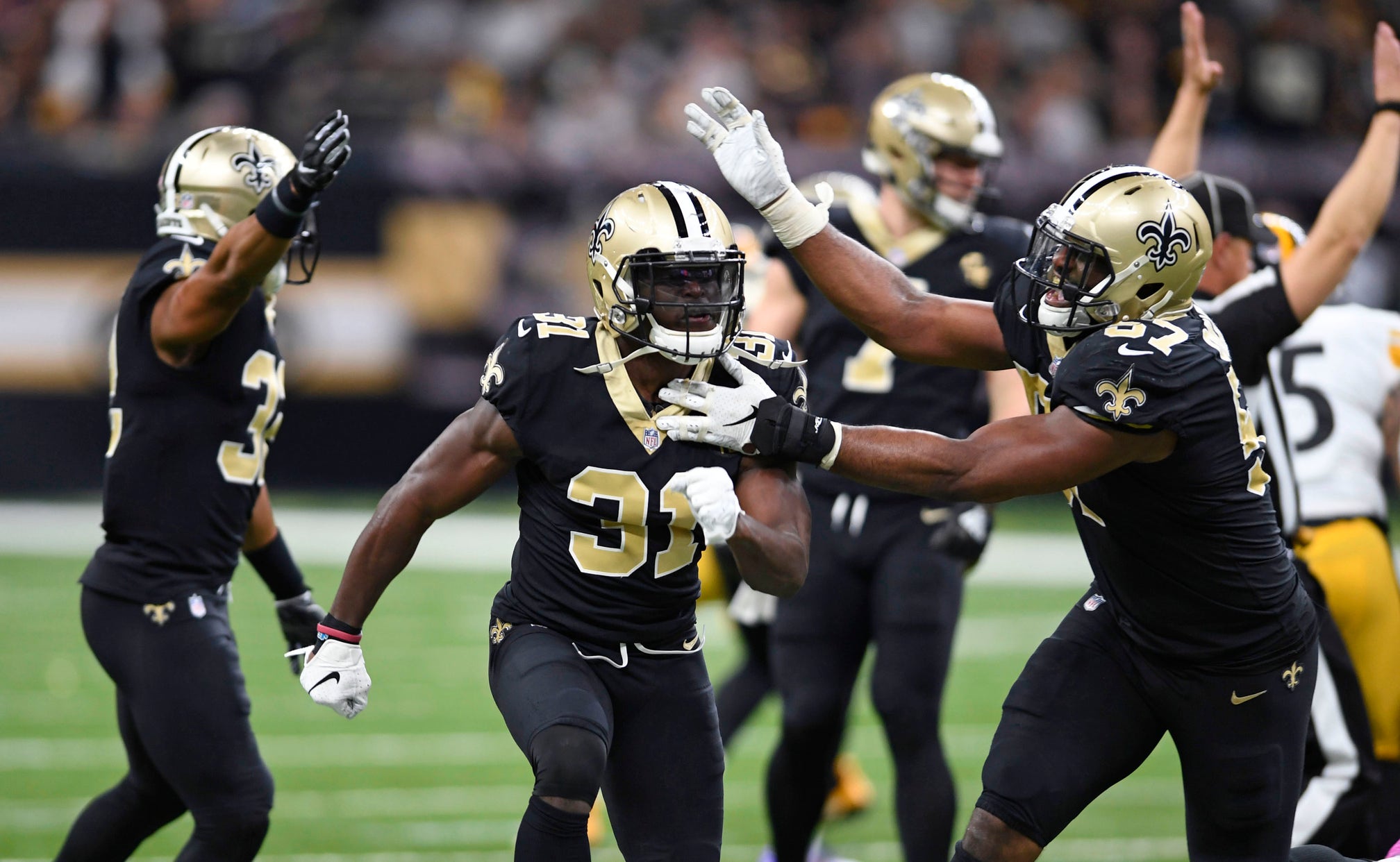 NEW ORLEANS (AP) — Drew Brees found a receiver who hadn't played most of the season to sustain a late touchdown drive. The Saints' defense found a way to force two fumbles in the fourth quarter. And New Orleans' punt-return unit stopped a fake punt less than a yard short of a conversion that might have helped Pittsburgh protect a late lead.

Combine that with some good fortune on decisions by the officials, and it added up to a third straight fourth-quarter comeback for these charmed 2018 Saints, who'll finish the regular season as the best team in the NFC.

Brees capped a 326-yard passing performance with 2-yard touchdown toss to Michael Thomas with 1:25 left, Sheldon Rankins stripped JuJu Smith-Schuster in the final minute, and the Saints clinched the top seed in the NFC playoffs with a 31-28 victory over the Steelers that dealt a significant blow to Pittsburgh's playoff hopes.

"That's one thing these guys have done a good job with, coming up with plays when we needed it. We've won a lot of different ways this year," Saints coach Sean Payton said after New Orleans (13-2) reached 13 victories for the third time since he became coach in 2006. "I'm proud of this team. Man, they've showed a great resolve — dealt with injuries, dealt with all the adversity you might have in a long season."

Pittsburgh drove into potential tying field-goal range on its final drive, but Smith-Schuster fumbled while landing on Rankins after a short reception and linebacker Demario Davis recovered.

"One thing you know about this team is we're resilient," Rankins said.

Alvin Kamara gained 105 yards from scrimmage and ran for two touchdowns for New Orleans. Receiver Tedd Ginn Jr., playing for the first time since Week 4, caught a 25-yard pass on third-and-20 during the Saints' go-ahead series.

The Steelers briefly preserved their four-point lead when L.J. Fort blocked Wil Lutz's 50-yard field goal attempt with 6:16 left. But New Orleans quickly forced a fourth-and-5 and then stopped upback Roosevelt Nix a yard short of a first down when he took the snap on a fake punt with a little more than four minutes to go.

"I just wanted to be aggressive," Steelers coach Mike Tomlin said. "I like the play."

Ben Roethlisberger passed for 380 yards and three touchdowns for the Steelers (8-6-1), connecting 14 times with Antonio Brown for 185 yards and two touchdowns. Pittsburgh fell into second in the AFC North behind Baltimore and out of playoff position.

The Steelers could still win the division with a victory next week and a loss by the Ravens. Their path to a wild card is unlikely at best because it would require Indianapolis and Tennessee to tie. Pittsburgh's loss also clinched a playoff spot for the AFC South-leading Houston Texans.

"We're playing pretty good football, but it might not matter," Roethlisberger said. "Obviously we don't control our destiny anymore. We have to take care of business next week.

"You can be as skillful as you want on both sides of the ball and special teams, but there is still a small element of luck involved in football. A play here, a play there. If that's what it is, I don't know, but it's the game of football."

New Orleans went up 24-14 in the third quarter when Kamara dove over blockers at the line of scrimmage, capping a drive highlighted by his career-long 42-yard reception.

But the Steelers seized momentum back with a nine-play, 75 yard drive that included three passes to Brown, the last a 3-yard TD toss. Pittsburgh then took a 28-24 led with on its next drive, which again ended with a TD pass to Brown, who split double coverage by Coleman and Marshon Lattimore for his 20-yard score.

The Saints' final scoring drive was aided by a pass interference call on fourth down, marking the third Saints touchdown drive of the game aided by such a call.

The first also came on a fourth-down play in the first quarter when Joe Haden placed his hand on Kamara's back on a pass that appeared overthrown.

"I don't know what they saw. I just tried to jump up and go get the ball," Haden said. "It's an offensive game. You can't touch these guys. ... I'm very frustrated."

A play later, Mark Ingram scored from a yard out for his franchise-record 50th rushing touchdown, surpassing Deuce McAllister's mark set in 2008.

Before Lutz had a kick blocked, he made his franchise-record 26th straight field goal, surpassing the Saints mark set by Hall of Famer Morten Andersen during the 1992 and '93 seasons.

Brown clinched a sixth straight season with at least 100 catches — making him the only NFL receiver to do so — and six straight seasons with 1,200 yards receiving. He also has 15 touchdown catches, surpassing his career best.

Steelers: Nickel cornerback Mike Hilton was examined in the blue tent by team medical staff but returned to action. ... Starting linebacker Vince Williams left the game in the second half.

Saints: Left tackle Terron Armstead left the game in the first half, returned to action a few series later, but then left the game again for good in the second half. After that, Andrus Peat moved to left tackle and rookie Will Clapp took over at left guard.

Steelers: Host Cincinnati on Sunday, needing a win to have any hope of advancing to the playoffs.

Saints: Finish the season at home against Carolina on Sunday.