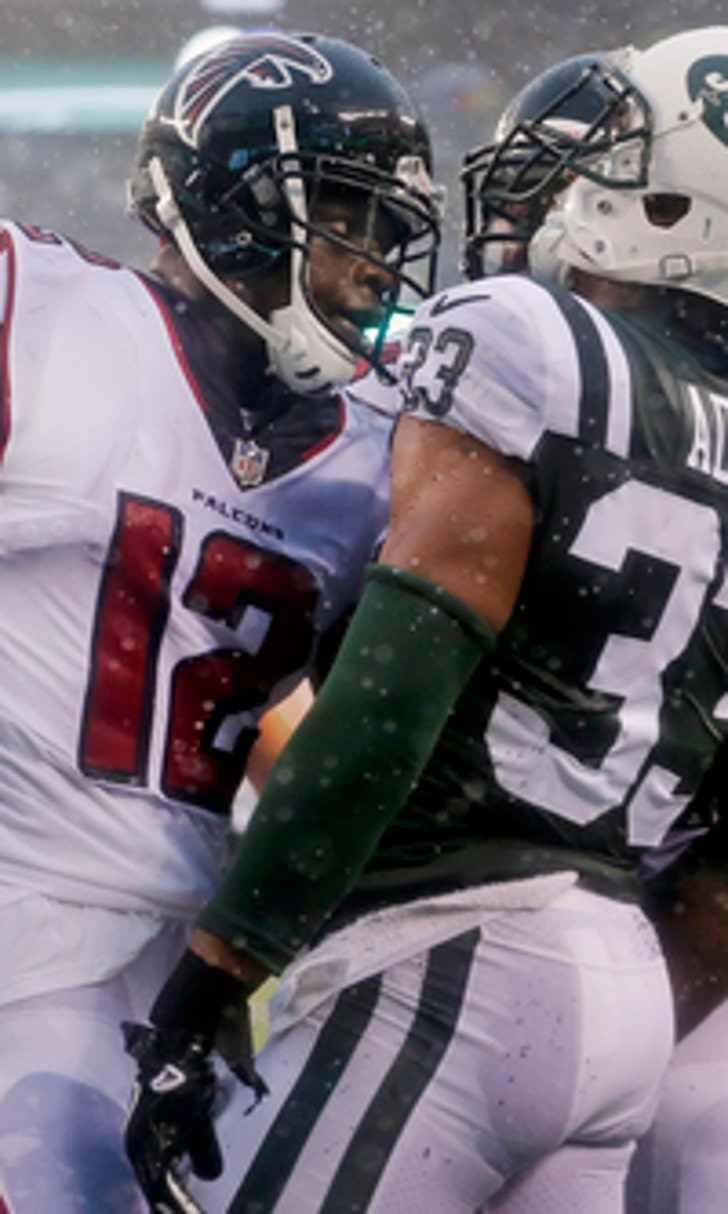 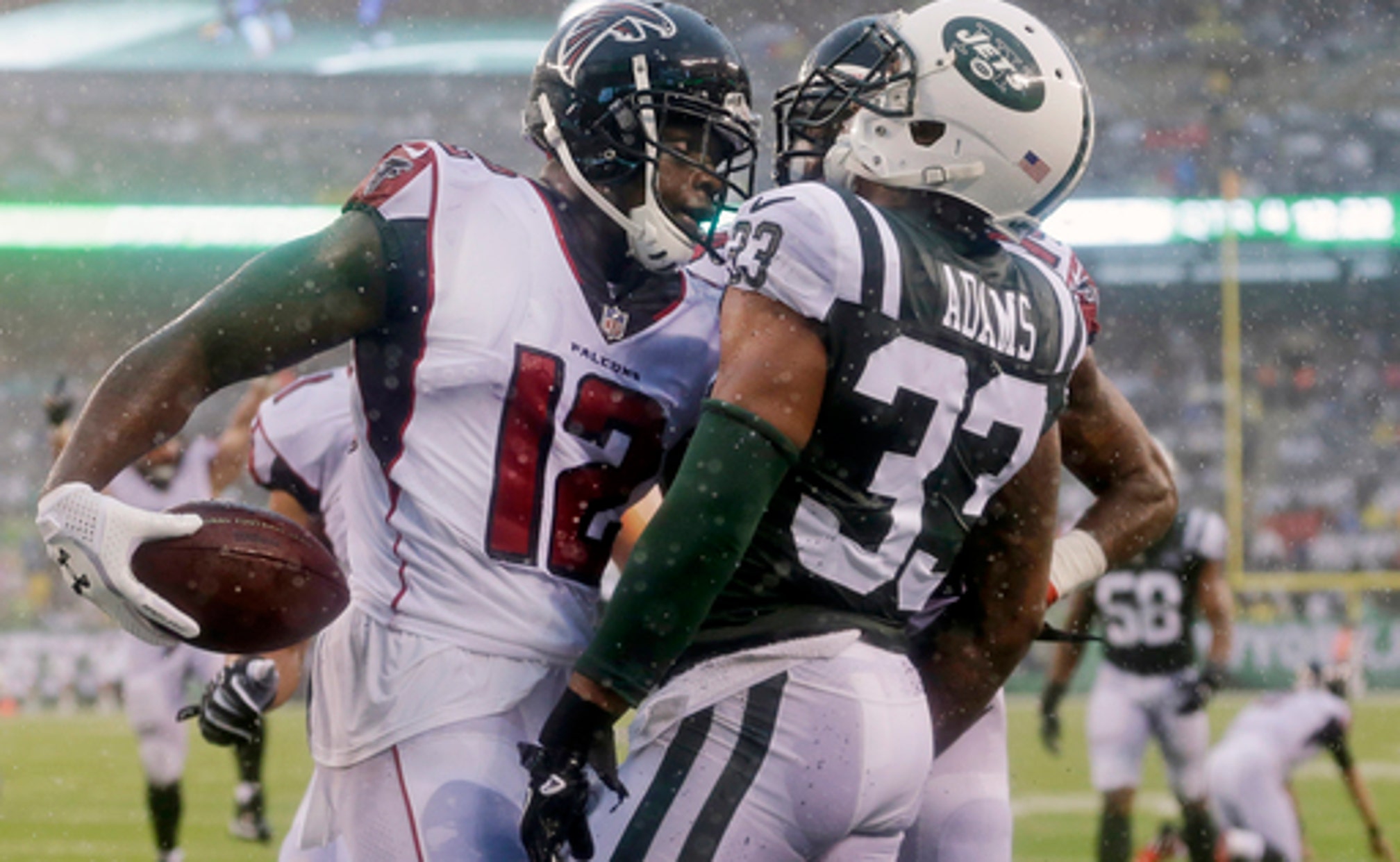 EAST RUTHERFORD, N.J. (AP) The football kept slipping out of Matt Ryan's hands - and the game seemed to be going that way, too, for the Atlanta Falcons.

Fumbled snaps, dropped passes and a big-time drenching had both squads trying to find their footing, but the Falcons steadied themselves just enough in a driving rain to slide past the New York Jets 25-20 on a soggy Sunday at MetLife Stadium

''That was some of the hardest conditions I played just for the length of the game,'' Ryan said. ''I have played in situations where we had some heavy rain or tough wind or anything like that for a little bit. From kickoff to the end of the game it was coming down pretty hard.

''You just have to find a way and you have to do the best you can.''

Ryan threw touchdown passes to Austin Hooper and Mohamed Sanu to help the Falcons (4-3) end a three-game skid - all to other AFC East teams.

''That was a tough battle for four quarters,'' Ryan said. ''Nothing is going to go perfect, especially when you play in those types of situations. But nobody flinched the entire game. We continued to play aggressive. It was a good win for our team.''

Ryan, who finished 18 of 29 for 254 yards, had lots of trouble with the weather, fumbling four snap exchanges from center Alex Mack and losing two of them. The Falcons ended up lining Ryan up in the shotgun down the stretch to prevent further problems.

The Jets (3-5) had their own issues while losing their third straight game in which they held a lead in the fourth quarter . Josh McCown had a bad snap exchange and fumbled on another play - but recovered - and Jeremy Kerley had a costly muffed punt.

McCown finished 26 of 33 for 257 yards with touchdown passes to Robby Anderson and Eric Tomlinson.

''Too many mistakes in the fourth quarter,'' coach Todd Bowles said. ''Can't happen. Can't put the ball on the ground. Can't have timely mistakes. Everybody has to play their brand of ball. Hard enough, but not good enough.''

Despite the soggy conditions, the Jets ran for just 43 yards on 22 carries. Matt Forte, who had 7 yards on four attempts, suggested that offensive coordinator John Morton ''strayed'' from the game plan.

''I'm surprised by that,'' Forte said. ''We knew the weather was going to be like this and then it continued to rain the entire game and I think we ran the ball (22 times) and it should have been one person getting 20 carries or something like that.''

The Jets missed a chance to increase a 17-16 lead early in the fourth quarter when Chandler Catanzaro missed his second field goal of the game, going wide right on a 48-yard attempt.

It gave the Falcons their best starting position of the game at their own 38 - and the Falcons took advantage.

Tevin Coleman eluded a few tackle attempts on a 52-yard run that got the ball to the Jets 10. After Coleman ran for 5 more yards, Ryan fumbled the snap and recovered. Ryan then hit a diving Sanu for an 8-yard touchdown to make it 22-17, but the Falcons quarterback again fumbled the snap on the 2-point conversion and the Jets recovered.

''It was real tough,'' Sanu said of the weather conditions. ''You just had to focus.''

New York cut the deficit to two on its next possession on Catanzaro's 46-yard field goal with 8:42 remaining.

The usually sure-handed Kerley muffed Matt Bosher's punt and Kemal Ishmael recovered for Atlanta to put the ball at the Jets 13.

''It sailed a little bit,'' Kerley said. ''It was wet, raining and the ball was more slippery than I thought it was. ... It messed up momentum a little bit.''

New York's defense stiffened, though, and held the Falcons to a 29-yard field goal by Bryant to give Atlanta a 25-20 lead with 5:19 left.

The Falcons nearly put the game away with what appeared to be an 80-yard punt return for a touchdown by Andre Roberts, but Atlanta's Sharrod Neasman was called for an illegal block in the back - negating the score.

After losing to Buffalo, Miami and New England in consecutive weeks, Atlanta looked very little like the NFC champions from a year ago. The Falcons held on in this one and got back to winning

''Outside, there was a lot of noise, but there wasn't inside,'' coach Dan Quinn said. ''So, that kind of resiliency, that kind of toughness is what this group stands for.''

FAST START: The Jets opened the game with an impressive drive, going 75 yards in eight plays and capped by McCown's 20-yard touchdown toss to a wide-open Eric Tomlinson , who had his first NFL score.

New York got the ball right back four plays later, when Ryan botched the snap from center Alex Mack and Jordan Jenkins recovered. But the Jets couldn't take advantage as Catanzaro's 46-yard attempt was wide right.

SWINGING MOMENTUM: The Jets took a 17-10 lead with 2:26 remaining in the first half when McCown connected with Anderson on a perfectly placed 24-yard pass through a driving rain for a touchdown.

Bryant booted field goals of 45 and 37 yards to cut the deficit to one at 17-16 in the third quarter. The second kick came on a drive that started on a 53-yard catch by Julio Jones. The Falcons wide receiver had been held to just two catches for 21 yards by Morris Claiborne, who left with a foot injury.

Claiborne said X-rays were negative, but was scheduled to have an MRI on Monday. He wasn't concerned that it could be a long-term injury.

WHOOPS: The Falcons had fumbled just four times coming in and lost just one - also by Ryan.

Falcons: at Carolina next Sunday.