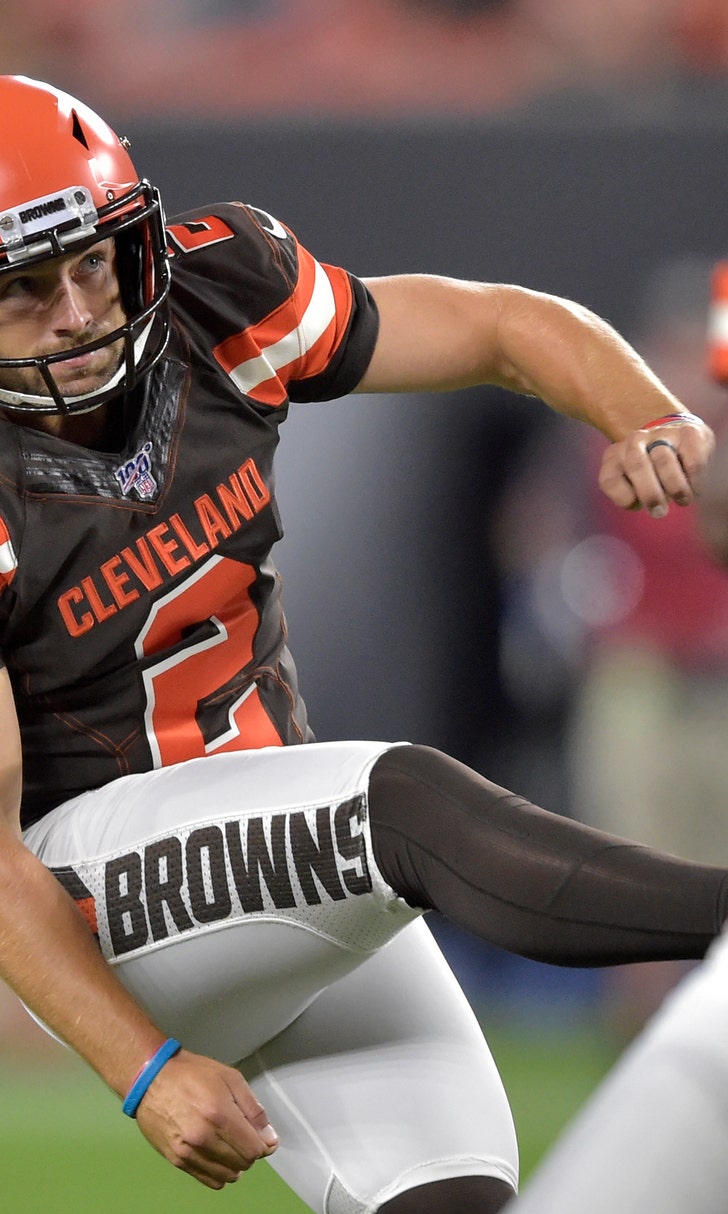 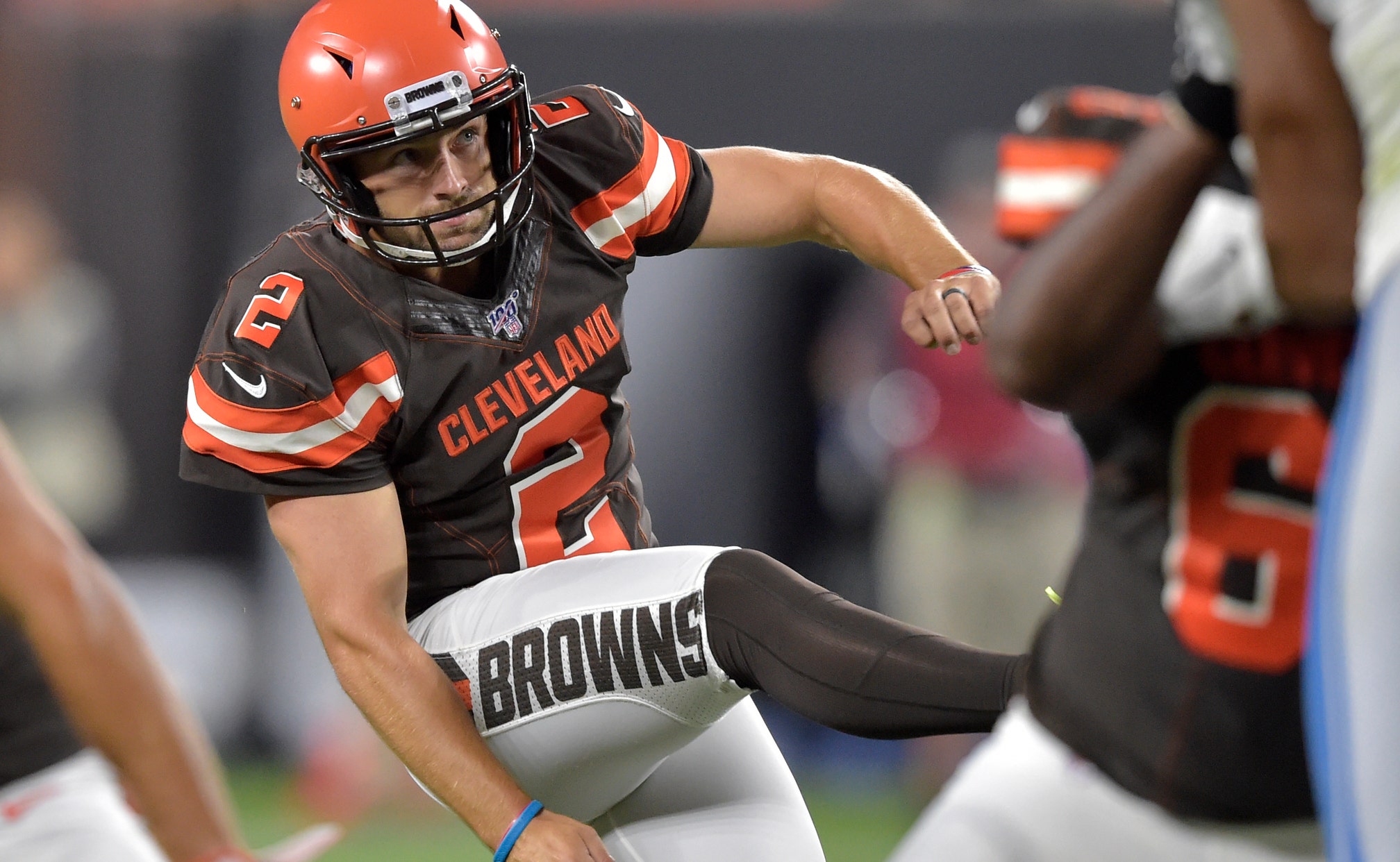 CLEVELAND (AP) — Once Austin Seibert straightened himself out, the Browns' kicking competition got on target.

Seibert appeared to lock up Cleveland's kicking job after a summer-long battle with Greg Joseph, and the Browns ended the preseason with a 20-16 win Thursday night over the Detroit Lions, who finished 0-4.

Seibert kicked field goals of 36 and 33 yards and made two extra points. The fifth-round draft pick from Oklahoma has been competing with Joseph, but Seibert, who got off to an abysmal start in training camp, separated himself by making all four field goals last week in Tampa and didn't miss against the Lions.

He said a small adjustment in his technique made the difference. He compared himself to a car getting a tune up.

"I had to get realigned," said Seibert, who made six of seven field goals and all six extra-point attempts in the exhibition season.

The Browns (3-1) are hoping to contend for a playoff spot this season and need a dependable kicker. Coach Freddie Kitchens would not commit to Seibert as his starter, and downplayed his second straight strong performance.

"He's supposed to perform," said Kitchens, who earlier in the week said he would give Joseph all the kicks. "Nothing was set in stone. He went 4 for 4, so he got another chance."

Veteran QB Josh Johnson scored on a 1-yard sneak and threw a TD pass for the Lions, who played sloppily — 12 penalties — and not up to coach Matt Patricia's standards.

"Too many mistakes, too many penalties," Patricia said. "These are things we need to eliminate. So many plays that got off track. So many negative plays. We obviously have got a lot of work in front of us, but I think these guys enjoy each other and work real hard."

Browns quarterback Baker Mayfield, receiver Odell Beckham Jr. and Cleveland's other starters didn't even put on their uniforms. They stood on the sideline and watched as teammates they've played with all summer battled for jobs.

"For these guys this is a dream," said Beckham, who didn't play in the preseason because of a minor hip injury.

NFL teams must submit their 53-man rosters by Saturday at 4 p.m., and the next 48 hours will be tense for dozens of players.

Lions QB Matthew Stafford did dress for the game, but he didn't throw another pass after warmups as Patricia and Kitchens sat their first-teamers.

Browns third-string QB Garrett Gilbert threw a 7-yard touchdown pass to running back Dontrell Hilliard in the first half.

Tom Savage started for Stafford, played the entire first half and completed 5 of 9 passes. Savage recently returned from a concussion suffered in the preseason opener, and will likely be Detroit's backup.

"I've been in this situation for 12 years, so you never know until you know," said Johnson, who was with Washington last year and has been on eight other teams. "We compete until the end. I just try and control what I can control and be a leader."

Browns wide receiver Braxton Miller helped his chances of making the roster with three catches for 19 yards. The former Ohio State quarterback signed last week after being cut by the Eagles.

"He did well," Kitchens said. "He took one screen and made something out of it, used his hands well."

Cleveland backup tackle Travis Vornkahl had an interesting three-play sequence. He was called for an illegal block, caught a deflected pass for a 7-yard loss and was caught holding in the end zone.

Browns: Rookie OL Drew Forbes injured his left knee in the first quarter and didn't return. ... CB Lenzy Pipkins hurt his back while making an open-field tackle in the second quarter.

Wyatt Teller was sliding down Buffalo's depth chart. He landed in Cleveland.

The Browns, who have been looking for a starting right guard since trading Kevin Zeitler to the Giants in the Beckham deal, acquired Teller from the Bills a few hours before kickoff. Cleveland sent a fifth- and a sixth-round pick in 2020 to Buffalo for Teller, who started seven games at left guard as a rookie in 2018.

Teller will likely move into the starting lineup, given what general manager John Dorsey gave up for him.

"It gives us some depth at that position," Dorsey said on the TV broadcast during the third quarter. "He's a younger guy. I think he has developmental upside. You can't have enough good football players, and that's another one we've acquired."

Eric Kush had been working with the starters.