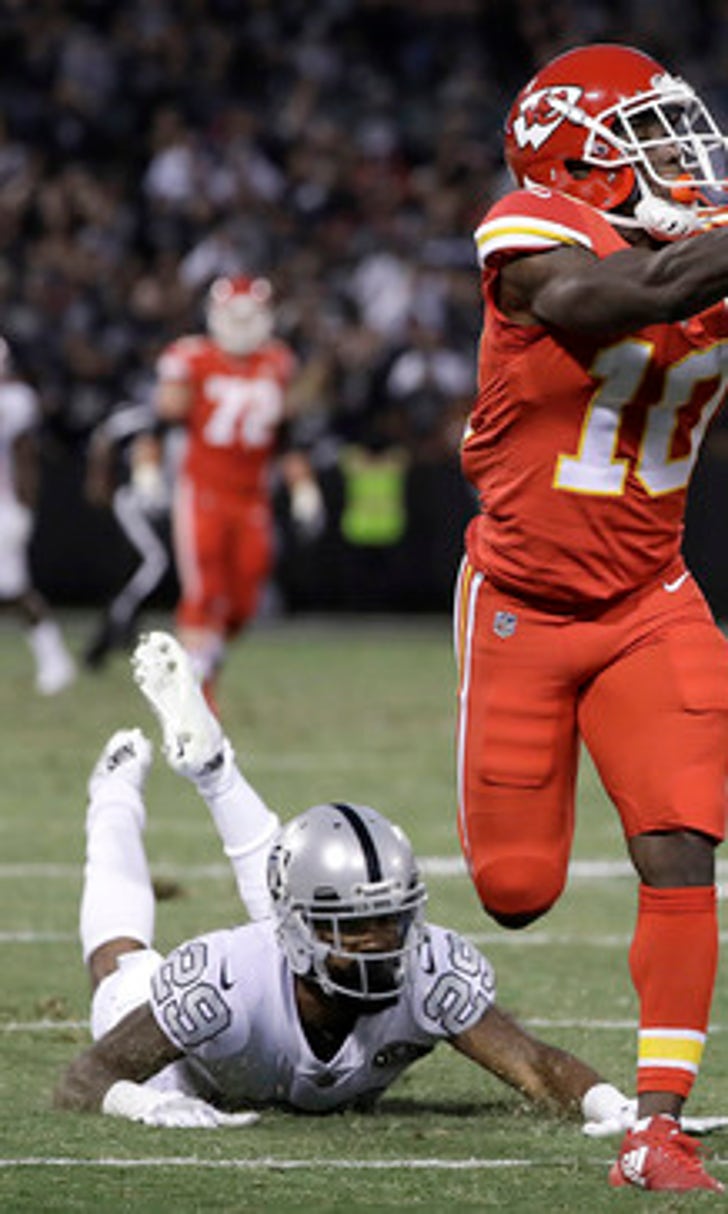 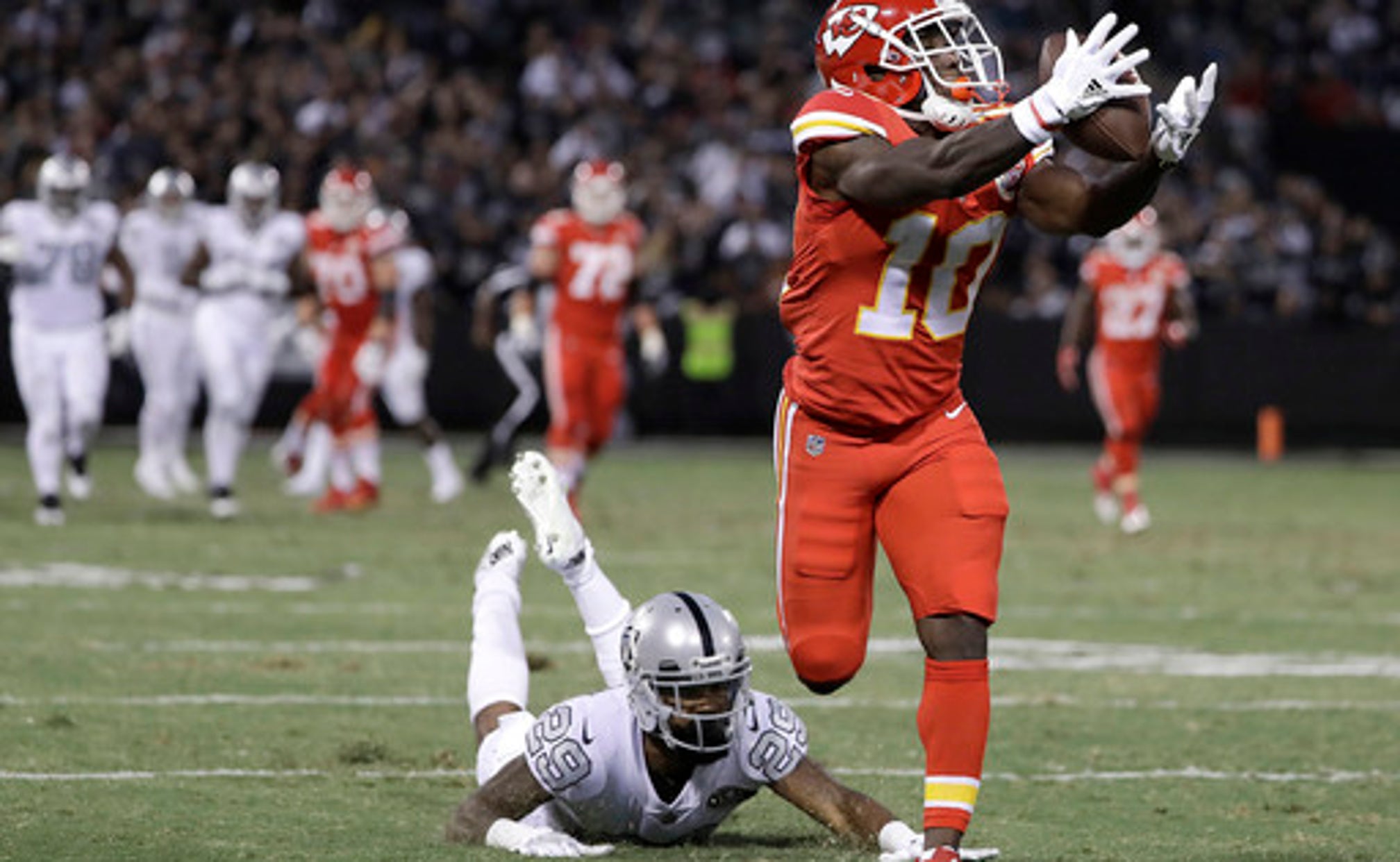 OAKLAND, Calif. (AP) The Oakland Raiders scored two apparent game-winning touchdowns that didn't count. The Kansas City Chiefs forced incompletions on back-to-back plays that ended with 0:00 on the clock only to have the game extended by penalties.

On a wild night that featured many premature celebrations, it was the Raiders who finally ended up on top.

Derek Carr shook off the two overturned touchdown passes to connect for the winner to Michael Crabtree after the game was extended by two defensive holding penalties, and the Raiders snapped a four-game losing streak with a 31-30 victory over the Chiefs on Thursday night.

''There's something about that that is exhilarating,'' Raiders coach Jack Del Rio said. ''We tapped into that. Our guys came in with a great mindset and we were determined to leave here with a victory.''

It sure didn't come easy as the Raiders (3-4) had to overcome a nine-point deficit in the fourth quarter against the Chiefs (5-2) and then drive 85 yards in the final 2:25, getting a fourth-and-11 conversion to Jared Cook that set the wild finish.

The Raiders had an apparent go-ahead touchdown pass to Cook with 18 seconds left overturned when replay ruled he was down at the 1. An offensive pass interference on Crabtree wiped out another touchdown on the next play.

But holding calls on Ron Parker and Eric Murray set the stage for the final play. Carr hit Crabtree in the front corner of the end zone from 2 yards out to tie it at 30.

''If there's one thing about Crab, it doesn't matter what happens throughout the rest of the game, he always shows up,'' Carr said. ''Obviously he did at the end there - twice. Made two big plays for us.''

Giorgio Tavecchio won it with the extra point , setting off the final celebration and sending the Chiefs to consecutive losses for the first time in two years.

''Multiple times, I'm thinking, `We lost it. We won it. We lost it. We won it,''' Chiefs quarterback Alex Smith said. ''Certainly I think that second-to-last play, the ball got thrown out of the back of the end zone, they called defensive holding and that's not even close to the play. That's the one that sticks out to me.''

Here are some other takeaways:

COMEBACK CARR: Carr completed 6 of 11 passes for 97 yards on the final drive for his league-leading 12th fourth-quarter comeback since the start of the 2015 season. Carr finished the game 29 for 52 for 417 yards and three touchdowns, while throwing no interceptions and taking no sacks.

SMITH'S STATS: Smith delivered another big performance in his scintillating start to the season. He threw for 342 yards and three touchdowns, including a lucky one on a pass that bounced off safety Keith McGill hands and went right to Albert Wilson for a 63-yard score . Smith has already equaled last year's season total with 15 touchdowns and is yet to throw an interception.

BOWMAN'S BOOST: The Raiders got a big boost from the addition of linebacker NaVorro Bowman, who played 60 snaps and called the defensive signals just three days after joining Oakland following his release from San Francisco. Bowman had a team-high 11 tackles but struggled at times in pass coverage. His biggest play came when he hit his former 49ers teammate Smith hard on a blitz to force a fourth-quarter punt.

''I felt bad when I did it because Alex is my guy,'' Bowman said. ''I've known him for a while. I was excited to play this game and show the coaches I'm committed to this organization.''

BEAST MODE TOSSED: The game took an odd turn midway through the second quarter after Kansas City's Marcus Peters hit Carr late, angering the Raiders. Offensive linemen Kelechi Osemele and Donald Penn confronted Peters and Lynch sprinted off the Oakland sideline to join the fray. Lynch, who considers Peters a family member, ended up shoving line judge Julian Mapp and getting ejected . Peters also was called for a personal foul on the play.

COOPER'S DAY: One of the biggest mysteries for the Raiders early this season was the lack of production from Amari Cooper, who topped 1,000 yards receiving in each of his first two seasons. Cooper had 18 catches for 146 yards the first six games before breaking through with 11 catches for 210 yards and two touchdowns for the second biggest receiving day in Raiders history to Art Powell's 247 in 1963.

''Hopefully this game can create a rhythm for our team and we can start to get that momentum,'' Cooper said.