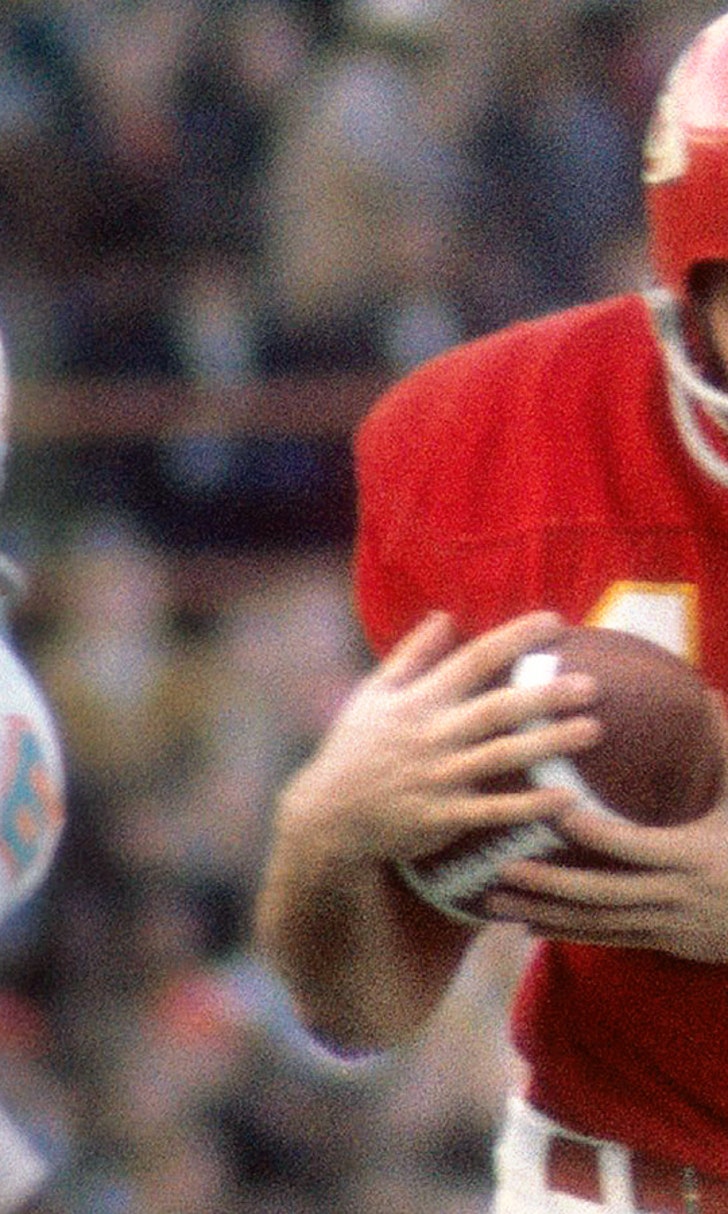 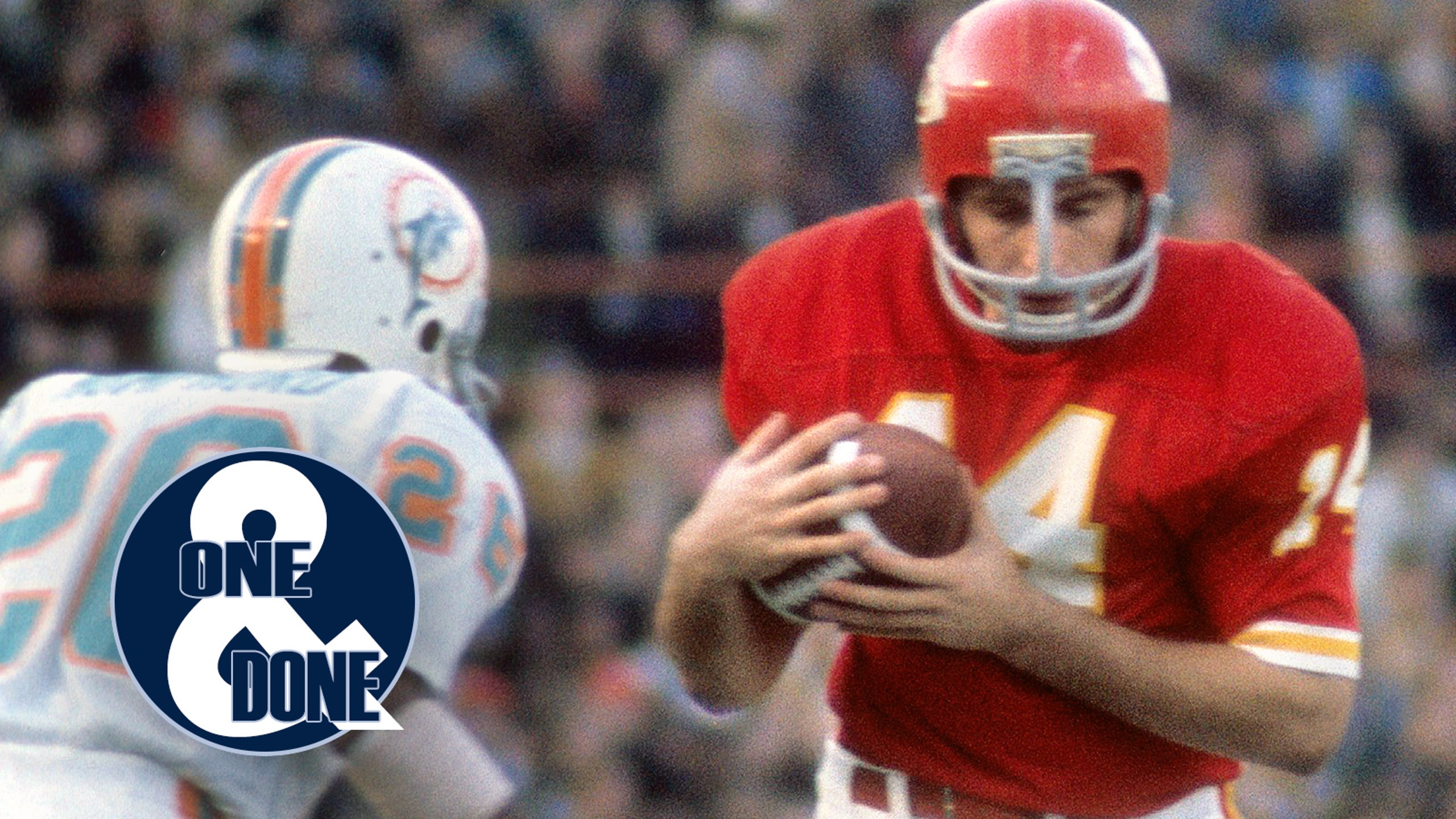 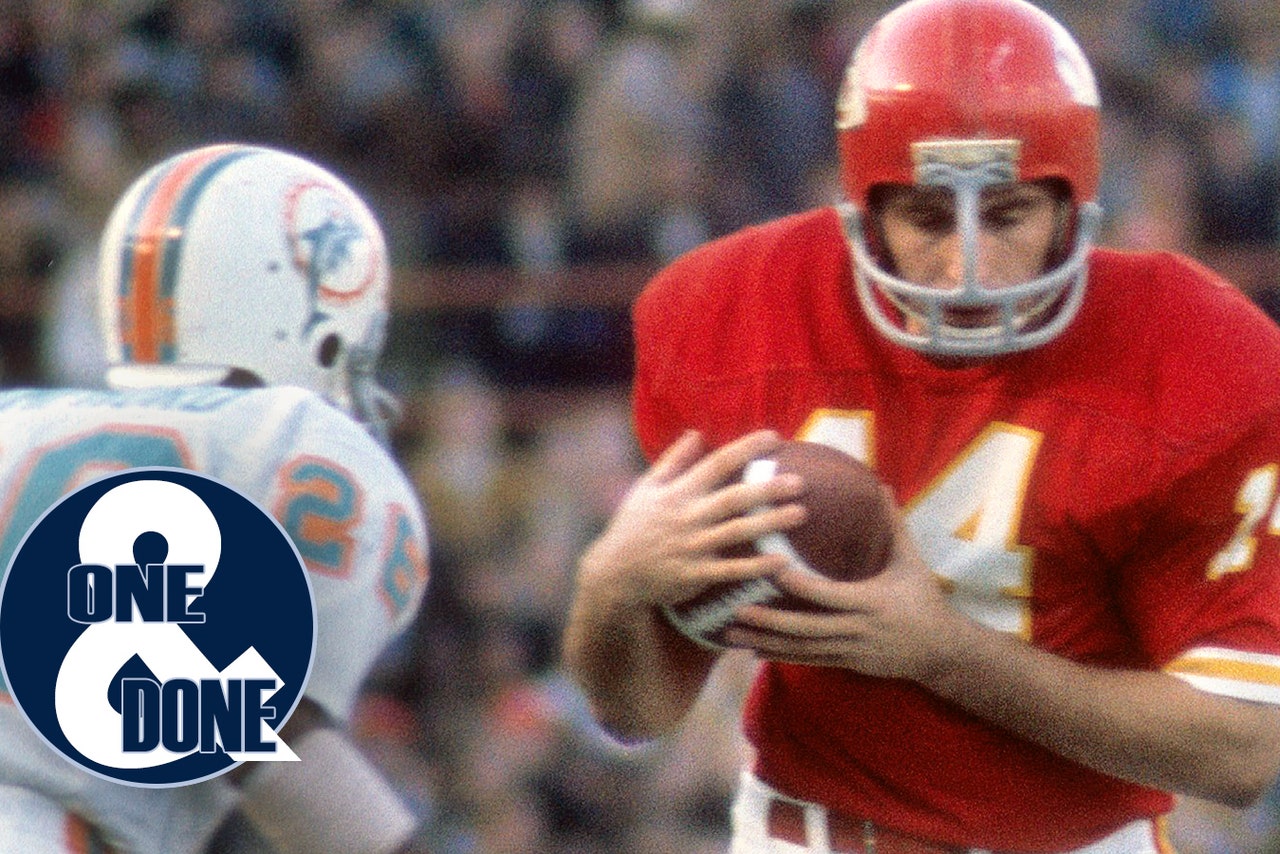 Every year around this time, former Kansas City Chiefs running back Ed Podolak reflects on Christmas 1971, otherwise known as the longest day of his -- or anyone else's -- pro career.

That's because on Dec. 25 of that year, Podolak and the Chiefs played the Miami Dolphins in the divisional round of the AFC playoffs, a game that saw an NFL record 82 minutes and 40 seconds tick off the clock before the Dolphins finally escaped with a 27-24 win.

Previously, the record for the longest game in pro football history was 77:54, set in the 1962 AFL championship between the Dallas Texans (in their final game before they became the Chiefs) and the Houston Oilers. Nine years and two days later, Kansas City ousted its predecessor from the record book with the same quarterback and head coach still at the helm -- and yes, the marathon felt every bit as long as was.

"Finally, I think in the sixth quarter, I looked at (Dolphins linebacker) Nick Buoniconti after we'd run into each other for about the 30th time that day, and I said, 'Do you think this thing will ever be over?'" the 68-year-old Podolak told FOX Sports Monday by phone from Costa Rica. "At that point, it was almost like sleepwalking. You were playing on pure adrenaline."

Anyone who took part in the game would tell you that the unseasonably warm and muddy affair didn't end a second too soon, but for an exhausted Podolak, it was just long enough. A Super Bowl champion who spent his entire nine-year career in Kansas City, Podolak rode the two overtimes to the best game of his career, as he racked up 350 all-purpose yards, a playoff record that still stands.

In the last game played at Kansas City's Municipal Stadium, the versatile Podolak carried the ball 17 times for 85 yards and caught eight passes for a career-high 110 yards, with a touchdown both through the air and on the ground. He also returned three kickoffs for 153 yards, including a 78-yarder that nearly won the Chiefs the game in regulation.

"There was a hole that opened up right over the middle," Podolak said of the return, which came after Marv Fleming's game-tying touchdown catch with 1:25 left in the fourth quarter. "It just opened up immediately, and I could see that there was a seam straight up the middle. So I took off for it, and soon there was only (Miami kicker) Garo Yepremian between me and the goal line. 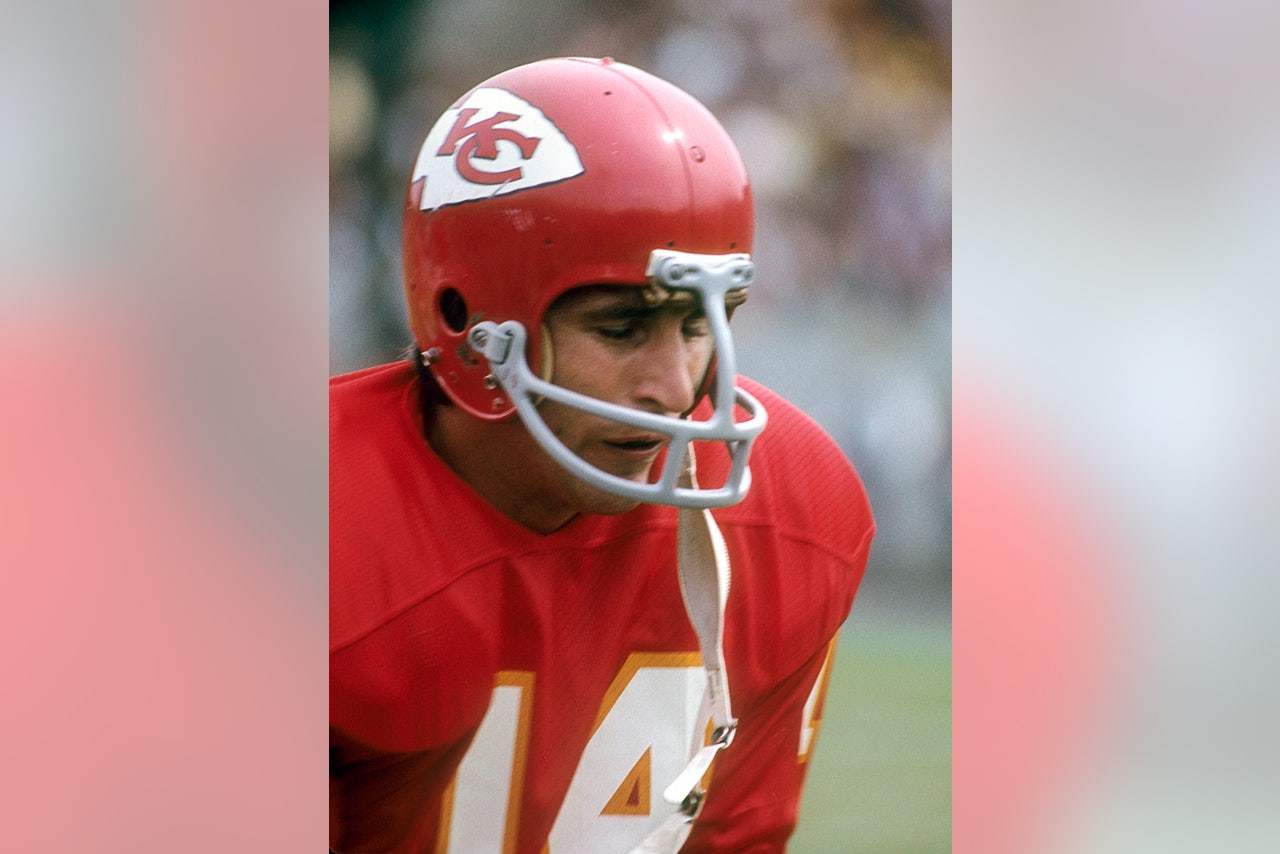 "I knew Garo wasn't going to tackle me, but he didn't get out of the way," Podolak continued. "So I had to dodge a little bit to the left to get past him, and as I did that, it gave (cornerback) Curtis Johnson an angle on me. I tried to see if I could cut back on him, but I could see that wasn't possible, so I ran it out as far as I could, which I knew was going to get us into field goal range."

Podolak was forced out at the 22-yard-line, well within the range of kicker Jan Stenerud, and with 35 seconds left, Kansas City had the ball at the Dolphins' 15, setting up a virtual chip shot for the future Hall of Famer. However, Stenerud pushed the kick wide right, a miss that still haunts him to this day. (When The New York Times asked Stenerud about the play in 2012, he chided the reporter, asking, "Do you want to talk about my mother's funeral, too?" before hanging up.)

"I felt very comfortable that we were in field-goal range, and just getting the ball down that far, I certainly thought that we were going to win the football game," Podolak said. "But then, of course, he missed, which was so unusual for him, and we started a whole new ballgame."

On the first play of the first overtime, another long Podolak return gave Kansas City the ball at its 46-yard line, but 3:04 into the period, Buoniconti blocked Stenerud's 42-yard shot at redemption. Then with less than three minutes left, Yepremian missed a 52-yarder of his own, effectively sending the game into an incredibly rare second overtime.

Finally, about midway through the second overtime, a 29-yard run by Larry Csonka set up Yepremian's game-winning field goal from 37 yards, but afterward, the talk of the game, aside from its length, was the versatile Podolak's record.

Or at least that was the case for everyone but Podolak.

"It wasn't even part of my thinking, and honestly, I'm not sure when I first became aware of the record, because I went to Aspen as soon as the game was over," Podolak said. "I had a home out there, and I just got out of the football mode for a while. I'm not sure I watched another game through the playoffs. 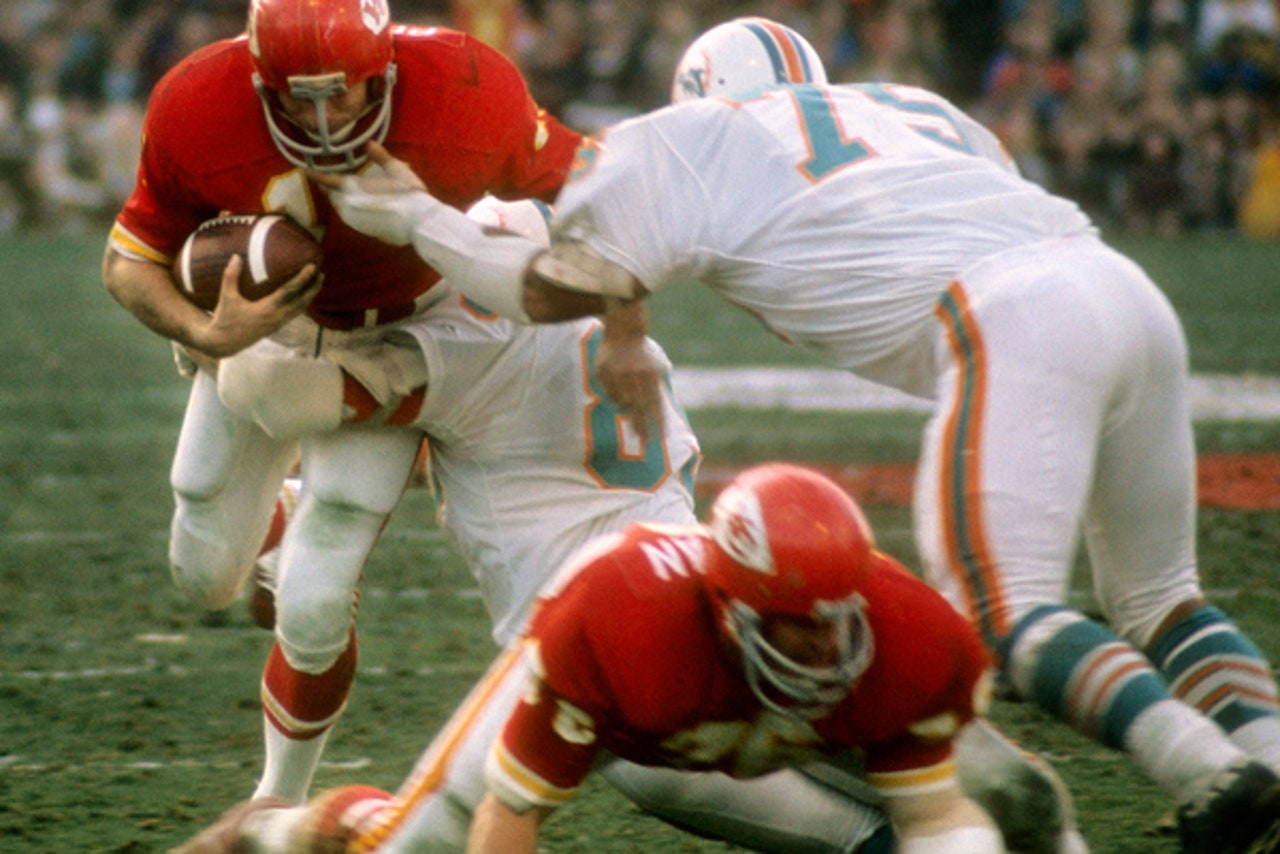 Ed Podolak was a workhorse.

"I was real excited about us making the playoffs again and hopefully being able to win another world championship, only this time having a real meaningful part of it," added Podolak, who missed most of his rookie season with an injury and played sparingly on special teams during the Chiefs' 1969 Super Bowl run. "And to this day, that still frustrates me that we didn't get it done."

Over the years, four other players have totaled more than 350 all-purpose yards in a professional game, with Adrian Peterson the most recent to do it, with 361 in 2007. Podolak would be the first to tell you that he's no Adrian Peterson, but rather, that he and the Chiefs took what Miami gave them.

"We had a very versatile type of offense, and I think we kind of used whatever became available to us," Podolak said. "Hank Stram had the offense designed that way, and that day, Miami decided they were going to take Otis Taylor out of the game by double-teaming him. We ran a bunch of screens on them, and I think all of that really came out because of their defensive plan to not let Otis beat them."

But now, more than four decades later, Podolak can appreciate his all-time mark rather than regret not getting the win.

"I'm really proud of the record," Podolak said. "It's hard to believe that it's lasted this long. Somebody told me one time that it's the oldest playoff record left. I don't know whether that's true or not, but it has been 44 years, and you've got to feel pretty good about that when you wish you could still play football but you know you can't."