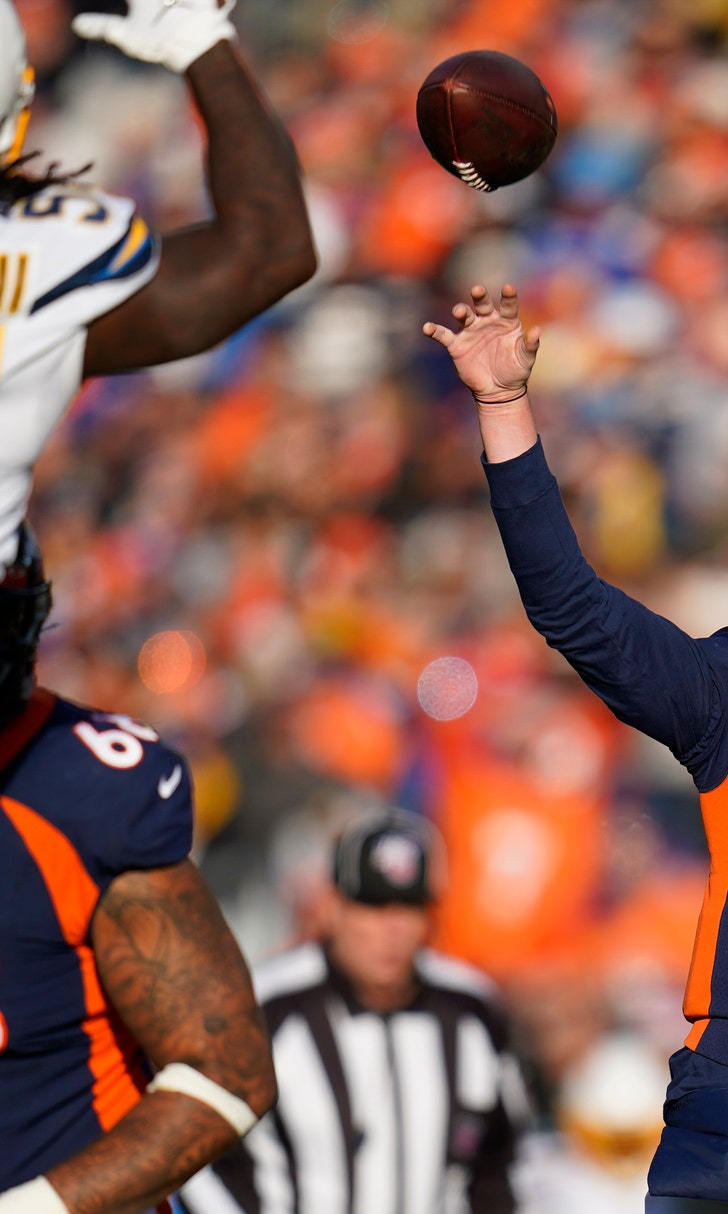 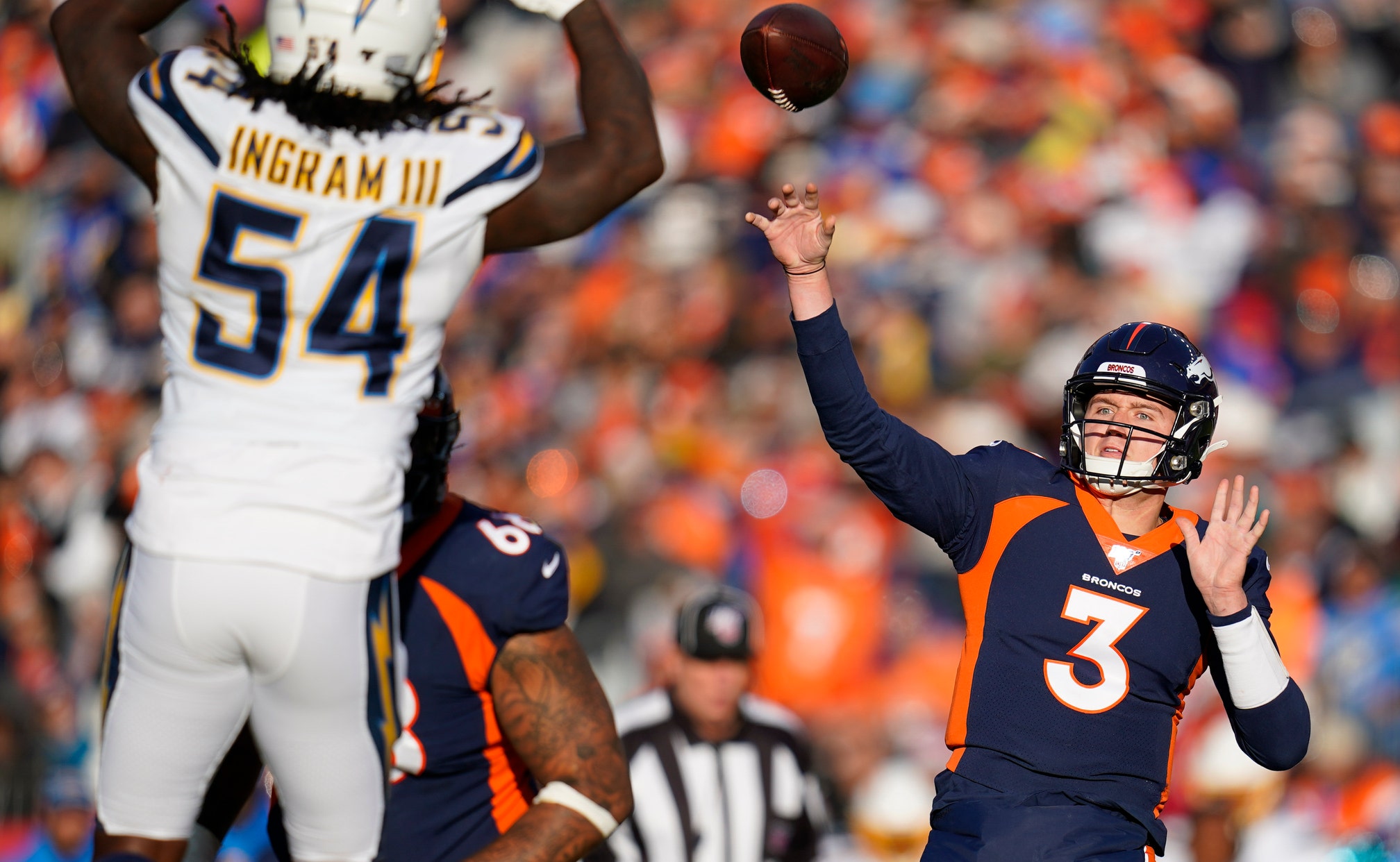 DENVER (AP) — Take a chance before halftime? No way.

Take a knee for overtime? Not a chance.

Vic Fangio bypassed a shot at a historic field goal with 1 second left in the first half because “it wasn’t desperation time.” When the Broncos got the ball back at their 28 with 9 seconds left and the game tied, he went for it.

Fangio recounted the discussion after Denver’s stunning 23-20 win over the Los Angeles Chargers on Sunday that included two field goals in the final 14 seconds.

“First, I was looking for a big play that could get a big chunk over the middle, bang a timeout, and we didn't like that as much. I said, 'Let's go down the sideline and see what happens.’"

Nope, it was defensive pass interference.

"I was trying to find the ball myself," Hayward said. "I think I have the same rights to the ball as he does. ... He ran into me. I had my ground."

"In that situation they know they've got to throw that flag," Sutton said. "They don't want to throw it in an end-of-game situation, but if you make them throw it playing through the defender for the ball they have to call it no matter what."

The Chargers (4-8) argued vehemently about the call that gave the Broncos (4-8) the ball at the Chargers 35-yard line with 3 seconds remaining, allowing Brandon McManus a shot at being the hero, if not historic.

His 53-yard field goal as time expired capped a furious final 14 seconds and gave the Broncos a sweep of their AFC West rivals.

Rookie quarterback Drew Lock’s debut win for Denver included a pair of touchdown throws to Sutton but just 134 yards passing and it came a month after Brandon Allen beat Cleveland. It made the Broncos the first team in league history to have two quarterbacks start and win their NFL debuts in the same season.

“I thought beating Arkansas my junior year was really cool,” said Lock, a second-round pick from Missouri. “But winning your first start is definitely a little cooler.”

Phillip Rivers drove the Chargers to the tying field goal, a 46-yarder by Michael Badgley with 14 seconds left and was prepared for overtime when Diontae Spencer returned the kickoff 26 yards to the Denver 28.

“We had a thought of kneeling at first,” Lock said, “but we saw Spencer bring it out the way he did. So we thought, all right, let’s try to get to the 50, a little past the 50 and give Brandon a chance.”

The Chargers continued jawing with both the Broncos and the officiating crew as the Broncos ran onto the field following McManus’ winner.

Rivers overcame an early interception, his eighth in three games, and a 17-3 deficit with touchdown throws of 30 yards to Austin Ekeler and 36 yards to Keenan Allen. Rivers completed a 38-yard pass to Mike Williams on fourth-and-11 in the closing minutes to get the Chargers in range for the tying field goal.

With a second left in the first half, McManus trotted out for an attempt at an NFL record 65-yard field goal with not a hint of wind. But he was summoned back to the sideline after the Chargers sent return man Desmond King II deep in case the kick was short. McManus was furious, ripping off his helmet and slamming it to the ground.

"I knew I could make it, they've seen me make it in practice and we're right at the line that I gave him,” said McManus, who lined up at the exact spot when he came back from halftime and made the practice kick through the uprights in the north end zone.

"Of course it is," said McManus, explaining “I know I can make the kick and this is a storied game that I grew up watching, it's a dream of mine to play in this league, and if I was able to have my name mentioned as the longest field goal in NFL history I would love that.”

Fangio said he’s seen many a kicker alter their mechanics to attempt an extra-long kick and that affects them on subsequent attempts, a notion McManus scoffed at: "Does a Hail Mary change the way a quarterback throws the ball?"

Broncos: RG Ron Leary left with a concussion in the fourth quarter. ... Wolfe went out after injuring an elbow with 2:22 remaining. ... Von Miller's 95-game starting streak was snapped when he was deactivated with a left knee injury.