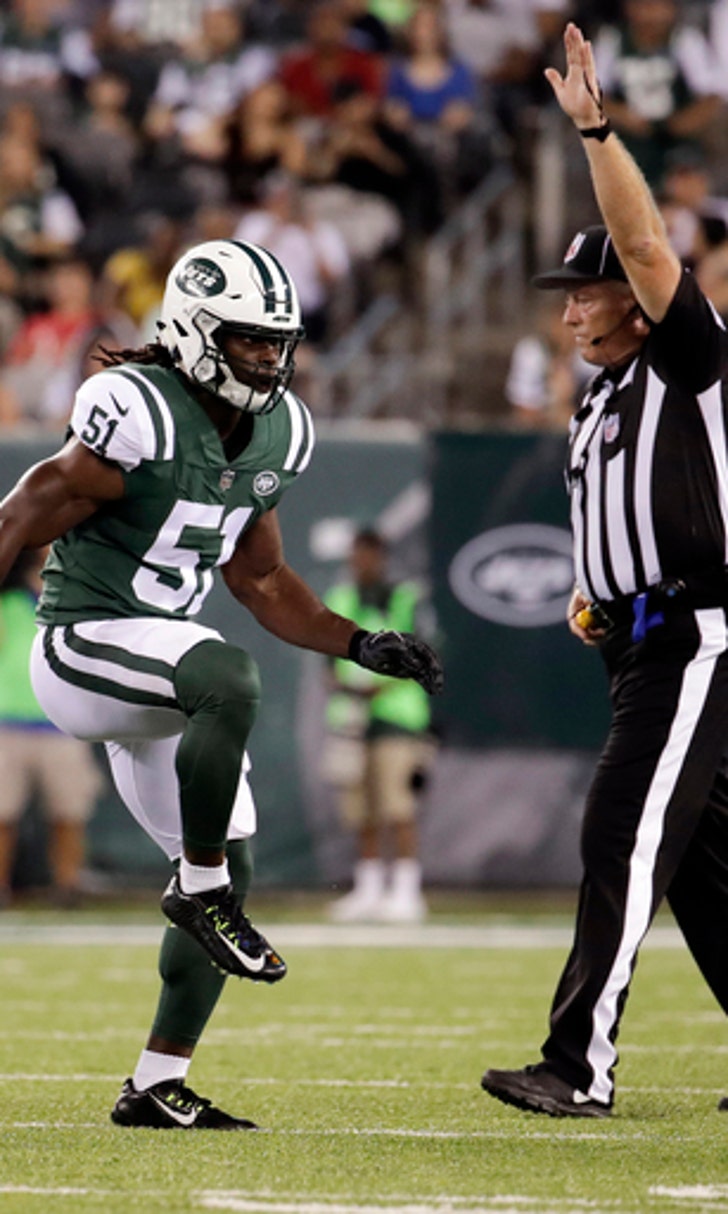 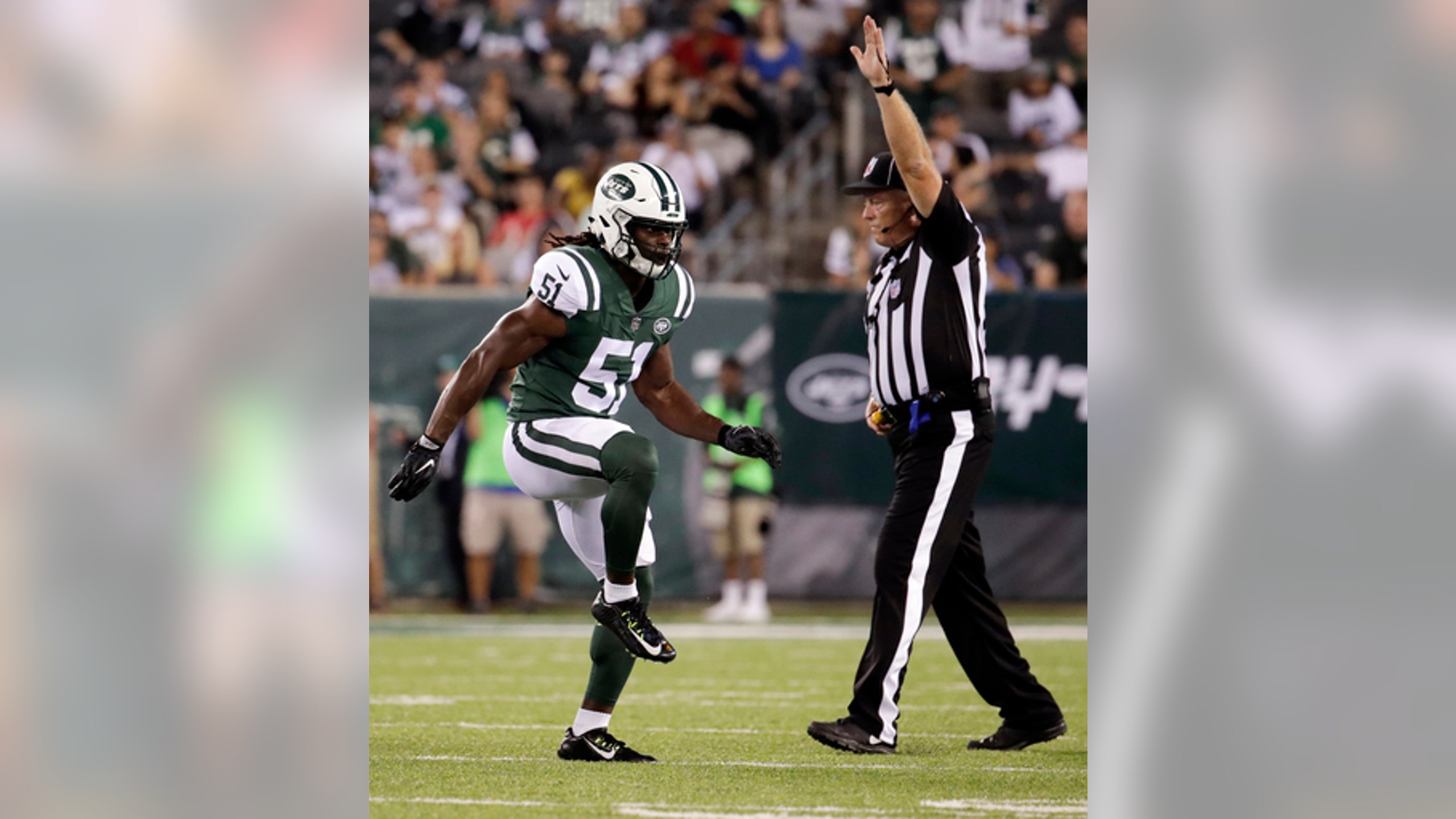 LB Julian Stanford standing out, hoping to stick with Jets

FLORHAM PARK, N.J. (AP) Julian Stanford was stunned by what he saw between him and the quarterback.

The New York Jets linebacker was unblocked and untouched as he bolted up the middle at full speed and flattened Tennessee's Alex Tanney, sending him flat on his back and into the MetLife Stadium turf.

The crowd let out a collective ''Whoa!'' while Stanford's fired-up teammates mobbed him to celebrate the bone-rattling hit that punctuated the Jets' preseason-opening win last Saturday night.

''I think that's like a linebacker's dream come true,'' a smiling Stanford recalled after a recent practice. ''It was just a great feeling. It was probably the highlight of my career to this point, so far.''

Preseason games don't count in the standings or stats sheets, but every play is crucial for a journeyman player trying to earn a roster spot such as Stanford.

Flash on the film during games and practices or risk being cut. It's a lifestyle - and challenge - Stanford fully accepts.

''It can be tough at times,'' acknowledged the 26-year-old Stanford, entering his third year with the Jets.

''Whether it's two snaps, four snaps, 10 snaps or only special teams, whatever I do and whatever film I put out there, I want to put my best foot forward so that when they turn the tape on, they see me.''

Stanford is used to fighting to be noticed. He was an undrafted free agent out of Wagner College in Staten Island, New York, in 2012 and has since competed his way to opportunities with four NFL teams: Jacksonville, Detroit, Tampa Bay and the Jets.

With an outstanding summer so far, including that sensational sack, the chiseled and athletic linebacker hopes he's finally found a home.

After all, the native of Bloomfield, Connecticut, grew up just a few hours from where the Jets train, and his family is able to watch him play in person. Stanford's wife, Tiffany Dawson, was born and raised in Staten Island and she was a track and field star at Wagner, where the two met.

''I want to do everything I possibly can to continue to get better,'' Stanford said, ''and continue to take steps forward so that hopefully I stick on this team.''

Stanford was a versatile star for Bloomfield High School's football team, playing linebacker, defensive line and running back, but was only lightly recruited by colleges. Wagner and Central Connecticut State were his options, and he chose to go to New York.

After four years as a standout linebacker for the Seahawks, Stanford was signed by Jacksonville in 2012 as an undrafted free agent. He beat the odds and made the Jaguars, becoming just the second Wagner player to appear in a regular-season NFL game - joining former Jets coach Rich Kotite (1967-72).

''From Day One when I got to Wagner, I always told myself I had dreams to play in the NFL,'' Stanford said. ''There's guys in the NFL whose jobs are to find guys like myself. I was going to do whatever it took to accomplish my goal.''

Stanford made 23 tackles while playing in 16 games as a rookie, including six starts. He thought that would be the start of big things - until he was cut the next summer right before the season.

''That was a major reality check for me,'' he said. ''I was out of football and wasn't sure what was happening next.''

He spent the next few months working out twice a day and going for tryouts with teams every Tuesday until Detroit signed him that December.

Stanford played in 14 games for the Lions in 2014, but was again a late-summer casualty the next season. He was signed to Tampa Bay's practice squad a few weeks later, released, re-signed and then waived a week later.

''You can't rest on one or two plays,'' Stanford said. ''This is a what-have-you-done-for-me-lately business. So, even though you made a play yesterday, what are you doing today? What are you going to do tomorrow?''

The Jets gave him his next shot that December by signing him to their practice squad. He was cut last September, re-signed to the practice squad the next day and then promoted to the active roster in October. Stanford was on his way to a breakout season, starting three games because of injuries to other players - but then hurt an ankle and landed on season-ending injured reserve.

New York cut him in April on what coincidentally was his wedding day. Because of NFL procedural rules regarding players who finished the previous season on injured reserve, the Jets were required to release him by April 15. They re-signed him three days later.

He's in the mix at inside linebacker for the Jets, potentially serving as a backup to Demario Davis and Darron Lee. Stanford has also shown to be a valuable part of the special teams unit.

''I'm a small-school guy and a lot of people might not know about me,'' Stanford said. ''I like to get back and tell my story to kids and give people who may be in my position hope and motivation that it is possible and you can do it, no matter where you start.''