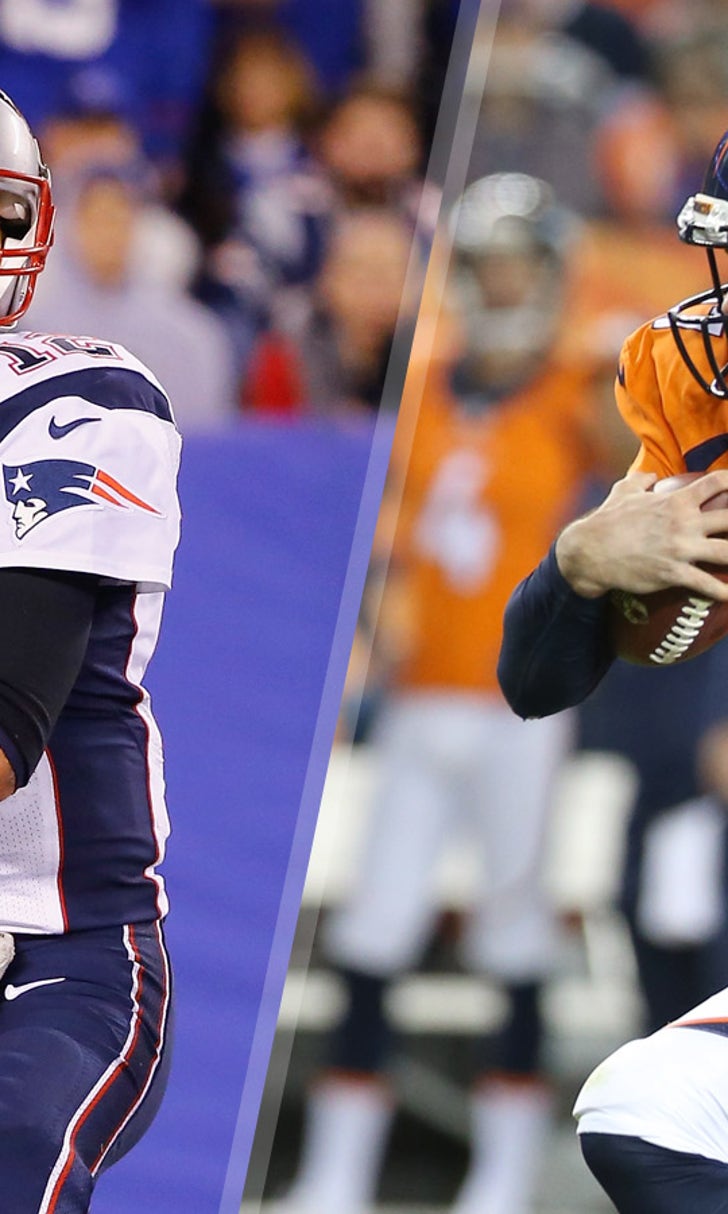 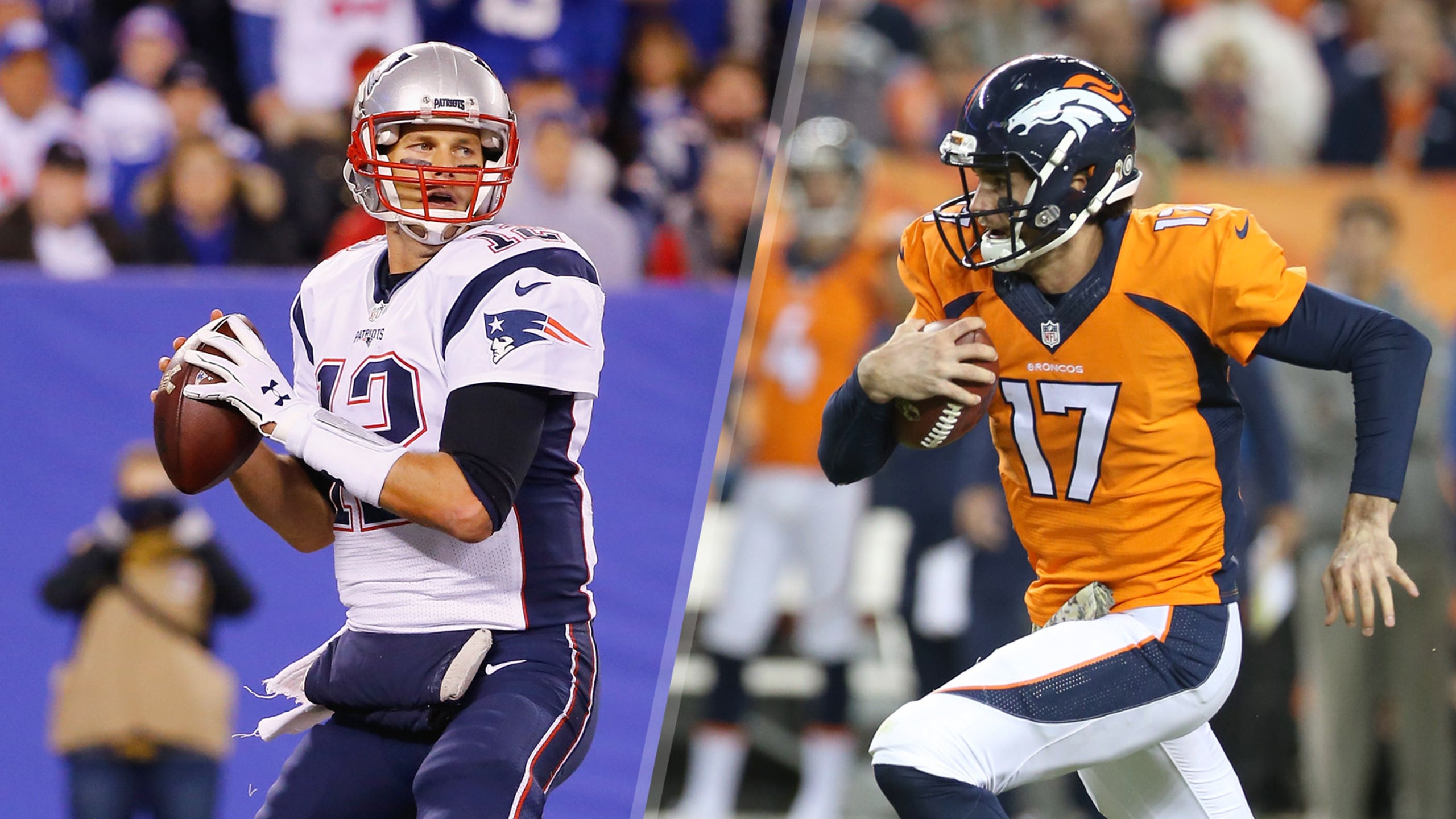 Game of the Week: Brock may make Broncos better, even against Patriots 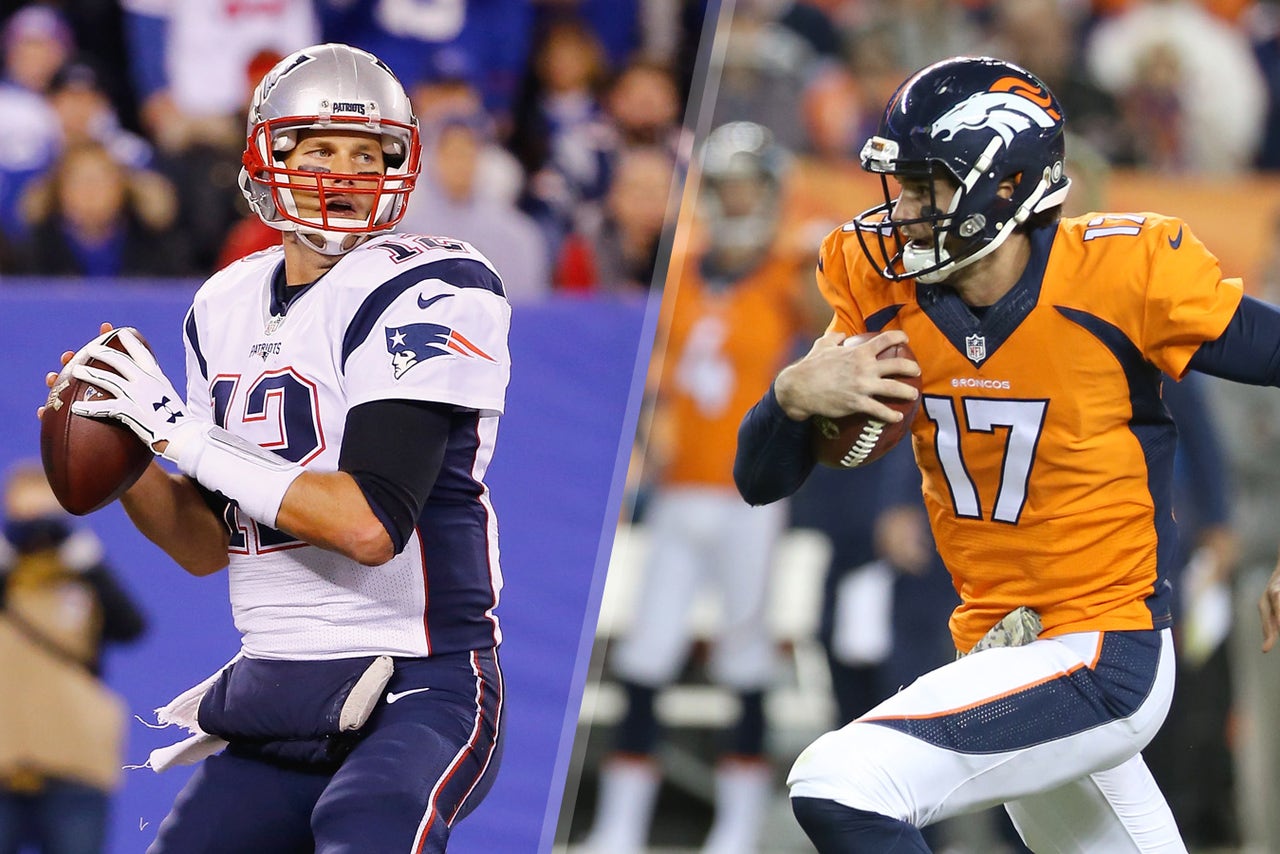 Brock Osweiler did a nice job last week of steadying the ship, as the Denver Broncos just barely edged the Chicago Bears. That said, quarterbacks don't usually win Offensive Player of the Week awards after leading their team to a 17-15 win against the 22nd-ranked scoring defense.

But the kid did enough to get the win, and that's all that mattered for the Broncos after two straight losses.

A battered Peyton Manning had looked like a shell of himself, and is getting much-needed time to heal as Osweiler and his Denver teammates take on the undefeated New England Patriots on Sunday night.

A review of the tape of Osweiler's solid first performance illuminates what his addition to the offense does (and doesn't) mean for the Broncos as they face a surging Patriots defense.

UNDER CENTER PUTS LBs UNDER PRESSURE

If you've been following the Manning saga under new Denver head coach Gary Kubiak, you've heard a billion times by now that Peyton's preference for life in the shotgun has been a restriction on the Broncos offense.

In last week's game against the Bears, Osweiler was, for the most part, under center instead of the gun — a critical development that reintroduces the notion of a legitimate run/pass conflict to any defense that now faces the Denver offense.

Sure, Denver still had run game possibilities with Manning standing in the pseudo-shotgun or "pistol" alignment, but that doesn't have the same effect on second-level players trying to read run or pass.

With Osweiler under center, the possibility of bootleg pass plays are back on the table. This means linebackers can't flow like rabid dogs with run action for fear of over-pursuing a play and leaving the quarterback out in space to either scramble or pick apart the passing windows left by the linebacker's vacancies.

Stretch-run action from under center freezes linebackers forced to honor the possibility that the quarterback will pull the ball from the running backs gut and delve into that preferred play action part of Kubiak's offense.

Run-action freezes the linebackers for just a second, leaving them a step slow to get to the point of attack of the run play. This allows blockers that moment of indecision where they can get on their blocks and seal the edge for big yards (below). 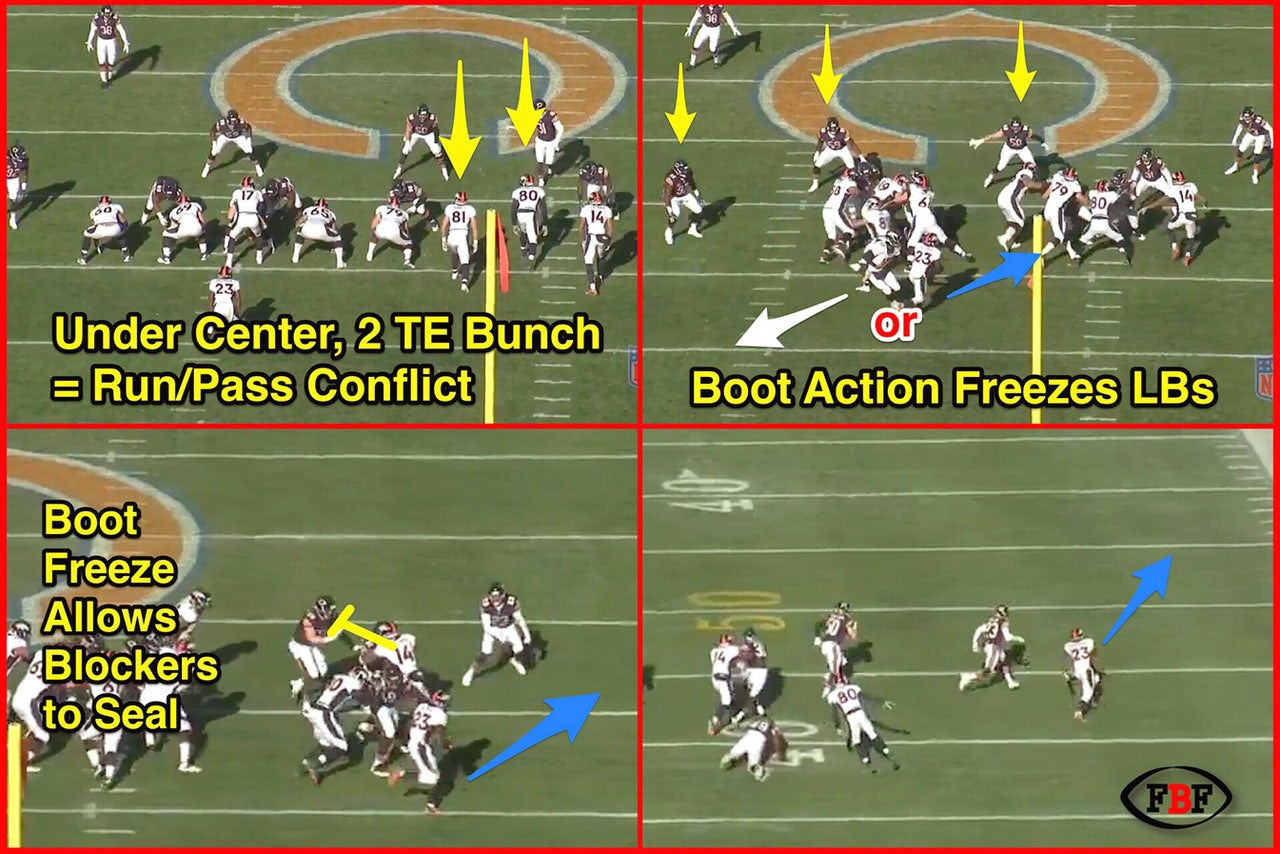 The run game reads for off-the-ball Patriots linebackers like Dont'a Hightower, Jerod Mayo, and Jonathan Freeny just got exponentially more difficult with the addition of Osweiler to the offense — or any quarterback with the ability to operate from center.

The injuries to Manning's aging body are well-documented, but more important than the quality of the throws coming from his arm is the more difficult environment he's had to throw in because of his lack of comfort under center.

Osweiler at quarterback eliminates that issue.

Football is an eternally complementary game, so when an offense shows competency in a new area (like the outside running game), it forces defenders who'd much rather be pass rushing to honor the possibility of run.

The following example is the very next play after the big outside run. You can see the effect the run success has on the techniques the defensive linemen now adopt versus the blockers across from them (below). 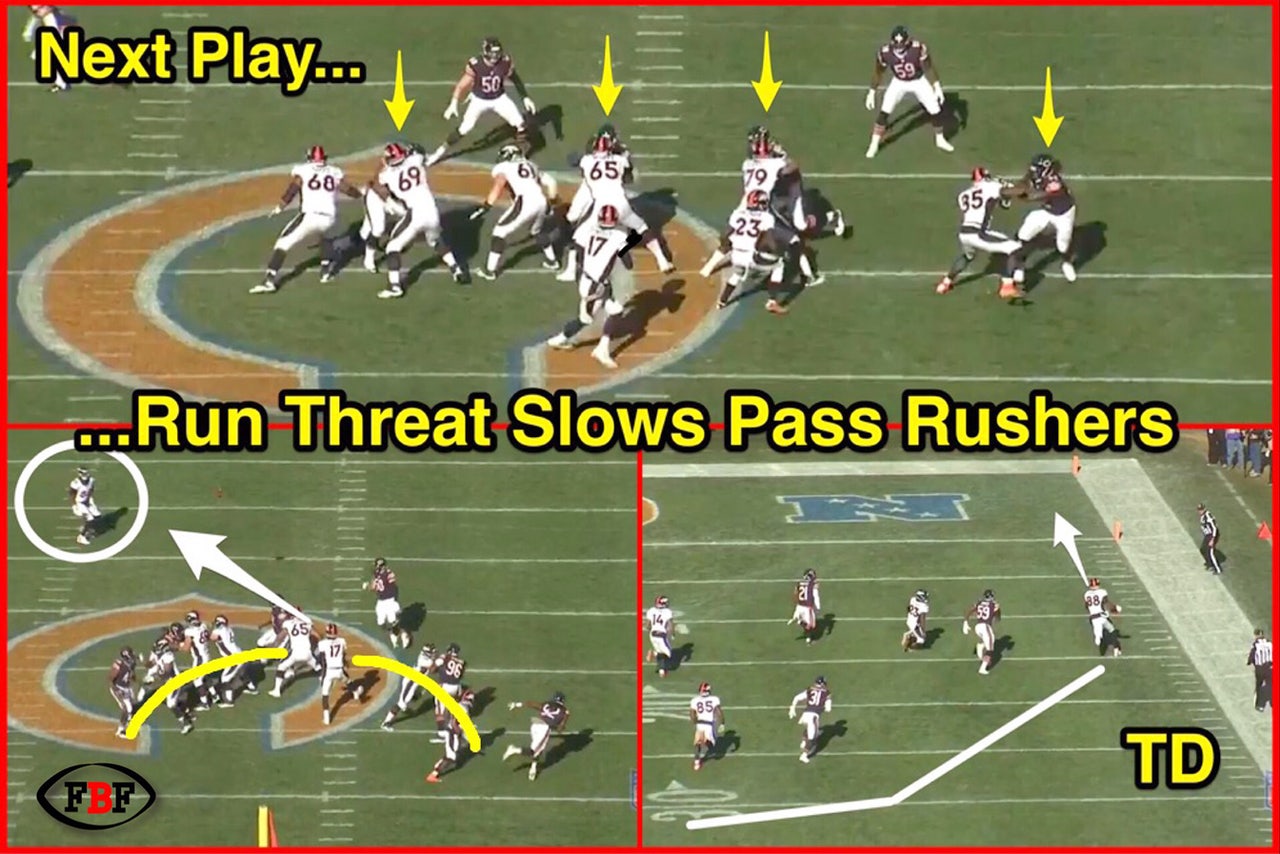 Without pass rushers on the edge of blockers, Osweiler is afforded a pristine pocket from which a high-school quarterback could complete passes. Add to that a blown coverage pickup on the second level that would've been more difficult to locate had there been pressure, and you have the makings of a huge offensive play.

Osweiler remained calm in the pocket and delivered a strike to the uncovered Demaryius Thomas, resulting in a huge 48-yard catch-and-run touchdown. Only minutes into the Broncos-Bears contest the effects of a real run/pass conflict were already blindingly obvious.

TAKE THE GOOD WITH THE BAD

Naturally, with only 17 points produced in a game against an average Bears defense, it wasn't all scoreboard fireworks — and that's not surprising.  Kubiak's style of more two-tight end sets with a running game focus blended with play action isn't one where offensive explosion is usually the result. It reduces turnovers, helps control the clock, and keeps his talented defense from playing excessive minutes due to rampant incompletions.

The biggest issue highlighted in the Bears game for Osweiler that the Patriots will inevitably seize upon in their own game-planning is his inexperience in directing protections against confusing pressure looks.

The majority of Osweiler's work as a professional have come in preseason games, a time when defensive looks are parred back to grade-school level.  Once the season begins, the more exotic stuff is unveiled — especially when the quarterback doesn't have a ton of exposure to those kinds of situations.

The Patriots aren't a huge blitzing team, but they will hide who is coming through a versatile group of rushers like Chandler Jones, Rob Ninkovich, and Jabaal Sheard. Determining who was and wasn't coming proved an issue for the Broncos against the Bears.

Without knowing who's directly responsible for setting protections for the Broncos (with inexperienced quarterbacks sometimes it is the center), it's still safe to say there were plenty of issues in the Chicago game where the offensive line and running backs weren't on the same page in ways that got the quarterback hit. This is one area in which Manning has always excelled — controlling the protection, reading the looks the defense gives him and ensuring he gets the ball off to prevent sacks.

In the example below, Denver's offensive line "slides" to the left with the running back also blocking in that same direction. Typically, the back goes opposite the slide, so this ends up being an error where the offensive line is short a man to the right, ending up in a sack.

Is it an error by the running back, center or Osweiler?  Only they know. 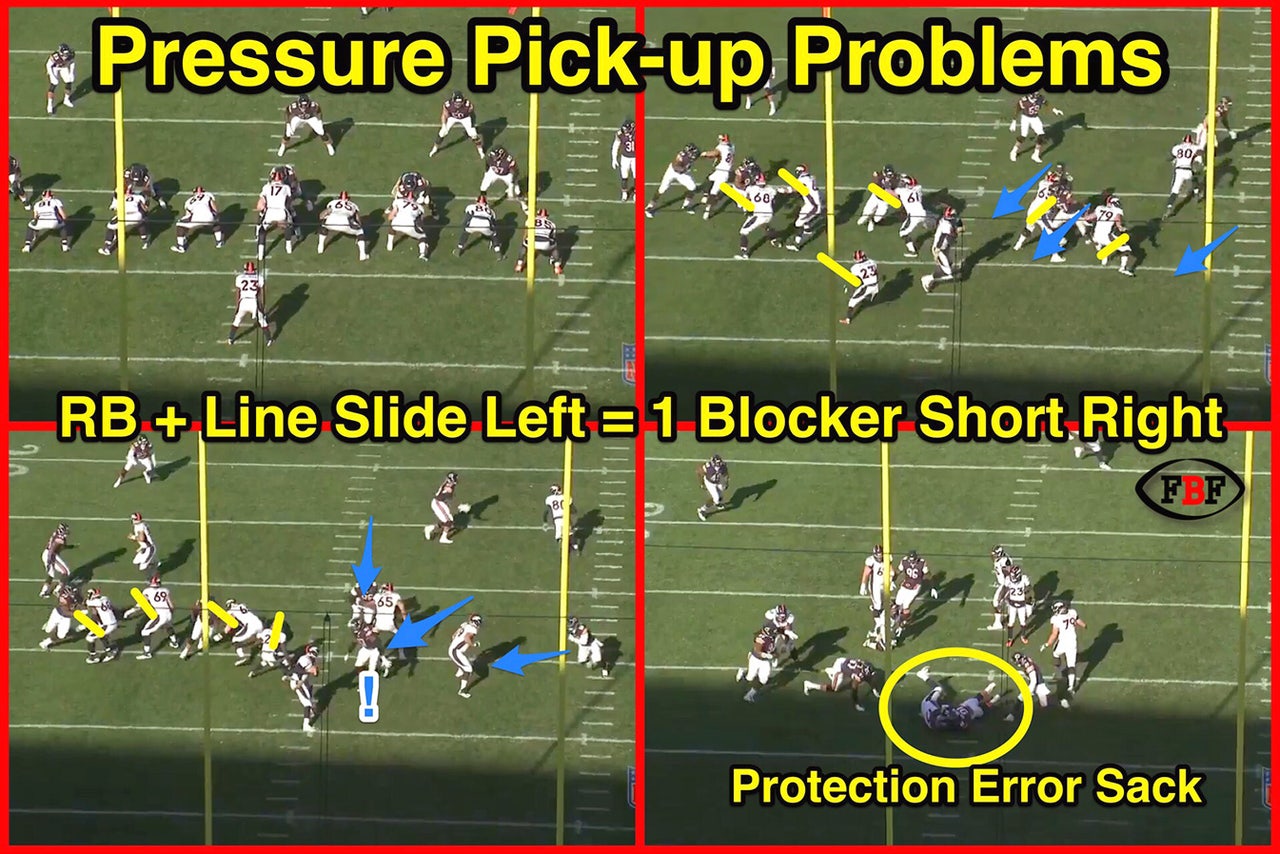 Whatever the answer, the Patriots will likely go out of their way to replicate that same conflict for the Broncos offense, much as the boot game will provide conflict for them.  At the end of the day, the playing field will have at least been leveled.

Osweiler and the Broncos offense took a positive first step a week ago, but as often the case in NFL circles, the reality trails the hype considerably.  Osweiler may end up a terrific quarterback down the road, but in review of the tape, last week appears more of a baby step for the Denver offense than a monumental leap.

Both the Broncos offense and the Patriots defense have new avenues available to them to damage the other side as they craft their game plans in preparation for Sunday's huge AFC matchup.

The College Football Playoff Picture: 10 teams with a real chance

Titans need to let Mariota do his thing

Four things to know for Week 12

Matt Chatham played for the Patriots and Jets over nine seasons in the NFL, winning three Super Bowls. He is also the founder of footballbyfootball.com. You can follow him on Twitter