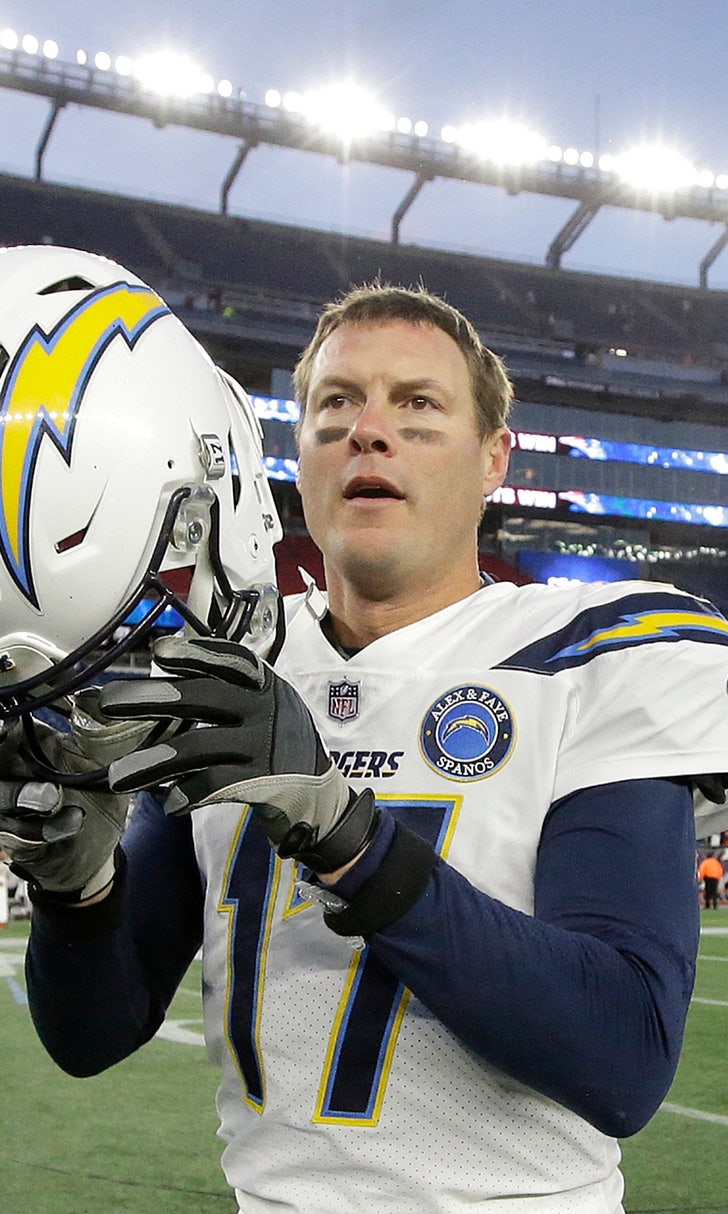 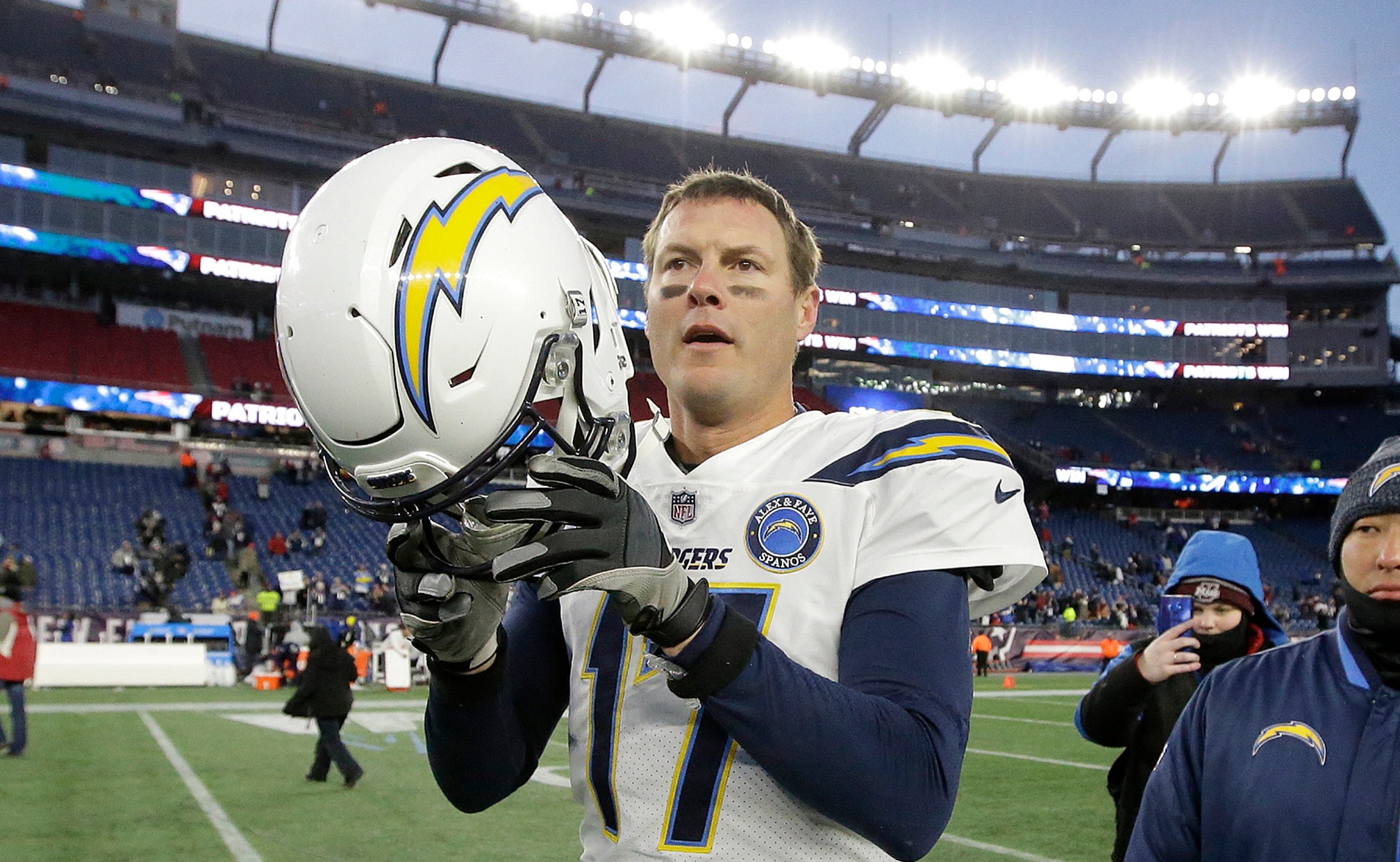 previous story
Preview: Heat trying to right the ship at home as streaking Thunder come to town
next story
Bowling Green rallies past No. 18 Buffalo 92-88

Emotional Philip Rivers thanks San Diego for its support

SAN DIEGO (AP) — Philip Rivers simply wanted to say thanks to San Diego for the way it supported him during his first 13 seasons in the NFL.

He knew it wouldn't be as easy as he still makes it look on the field on Sunday afternoons as quarterback of the Los Angeles Chargers.

Understanding the anger and angst left behind when the Chargers moved two seasons ago, Rivers fought back tears as he accepted an award from the San Diego Sports Association at its annual Salute to the Champions dinner Thursday night.

While the Chargers moved, Rivers didn't. He and his burgeoning family continue to live in northern San Diego and he commutes up and down the 5 and 405 freeways to practices in Orange County and home games at a soccer stadium in Carson. Thus, the sports association named Rivers one of its professional stars of the year for 2018, along with snowboarding superstar and Olympic gold medalist Shaun White, Boston Marathon women's winner Desiree Linden and Washington Nationals right-hander Stephen Strasburg.

"I certainly understand the mixed feelings and emotions many in San Diego have about our move," Rivers told the crowd in a hotel ballroom. "It's more than understandable. Those that still cheer and pull for us each week, we certainly appreciate it. I again, personally, want to express my gratitude for all the love and support that I've always felt in and around town, whenever I'm out and about."

On the verge of tears, Rivers paused to compose himself while the audience clapped.

He continued to struggle as he finished.

"As I try out there every Sunday, with that bolt on my helmet and 17 on my back, play like crazy with that passion and fight that that's the only way I know how, I hope that there are some of you still here in San Diego that can still say, 'That's our quarterback.'"

Rivers received a standing ovation as he walked away from the podium.

Rivers understands the emotional upheaval caused when Chargers owner Dean Spanos, unable to get a stadium deal to his liking, moved the team from its home of 56 seasons. Many once-loyal fans say they'll never cheer for the Chargers, no matter how beloved Rivers might have been. Many say that as much as they loathe Spanos for ripping away their favorite team, they support Rivers and want to see him finally win a Super Bowl ring. Others become angry when pondering that if the team ever does win a Lombardi Trophy, it would be as the Los Angeles, not San Diego, Chargers.

Many San Diegans even swallowed hard and cheered for once-hated Tom Brady and the New England Patriots when they routed the Chargers in the divisional round three weeks ago, once again leaving Rivers short of even playing for a championship.

Rivers' attachment to San Diego has as much to do with his family as football.

"This town was so welcoming to me and my family when we arrived in 2004, my wife and I and one daughter," he said as the crowd began to laugh, "and in a couple of weeks our ninth child will be here. We truly have enjoyed being a part of this community."

Rivers said afterward that it was important to accept the award in person.

"You don't know how many more times you're going to get, publicly, to get to say thanks, really," he said. "You know, small-town boy from Alabama ends up in California, in San Diego, playing 13 years and still living here now 15. You never know what it's going to be like. I can be nothing but thankful for how it was for our family and how much I loved playing down here. All those things. I just thought it was important not to just go, 'Yeah, OK, I don't think I can get over there,' and just to be able to express that at least one more time."

Rivers, 37, continues to play at a high level and said he has a handful of seasons left. He helped lead the Chargers to a 12-4 record this season and back into the playoffs for the first time since 2013. He threw for 4,308 yards and 32 touchdowns, with 12 interceptions.

"Well, shoot, I thought this was the year, I really did," he said. "We were in a groove and playing really well and we know what happened. It's as good as a team as we've had in some time. This rivals that '06 to '09 group we had, when we really probably should have won two. We're definitely going to be able to give ourselves a chance."

And he'll still be a San Diegan.