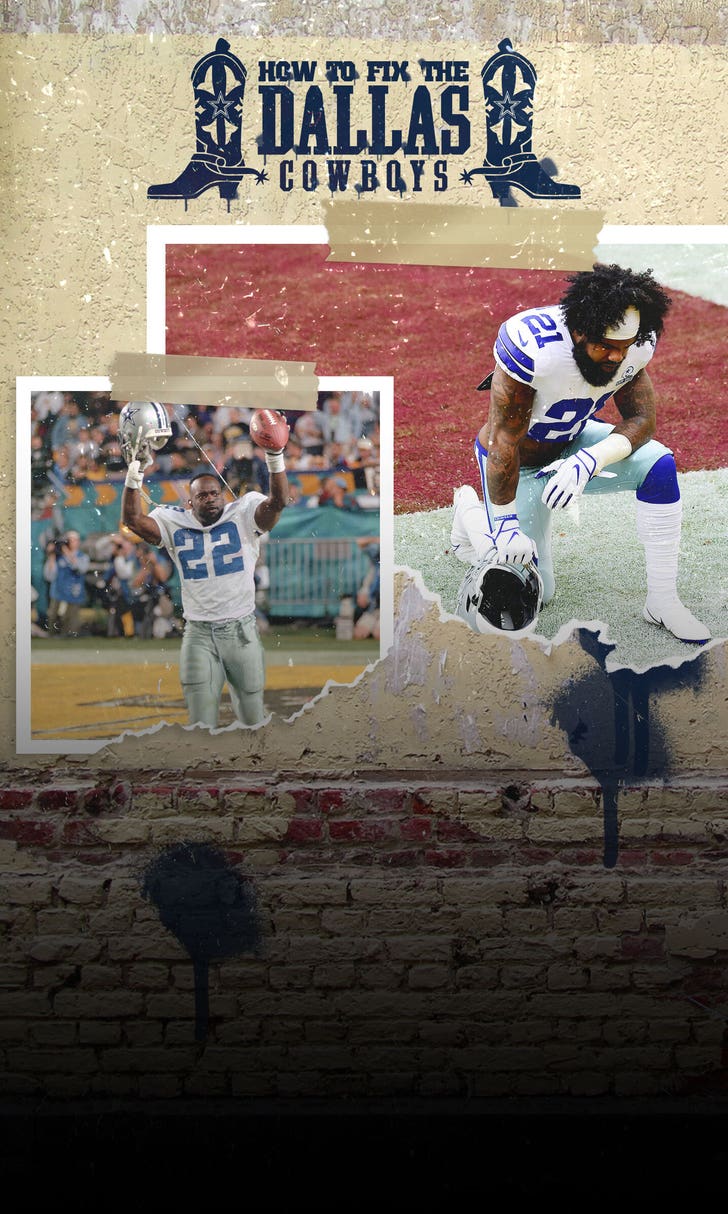 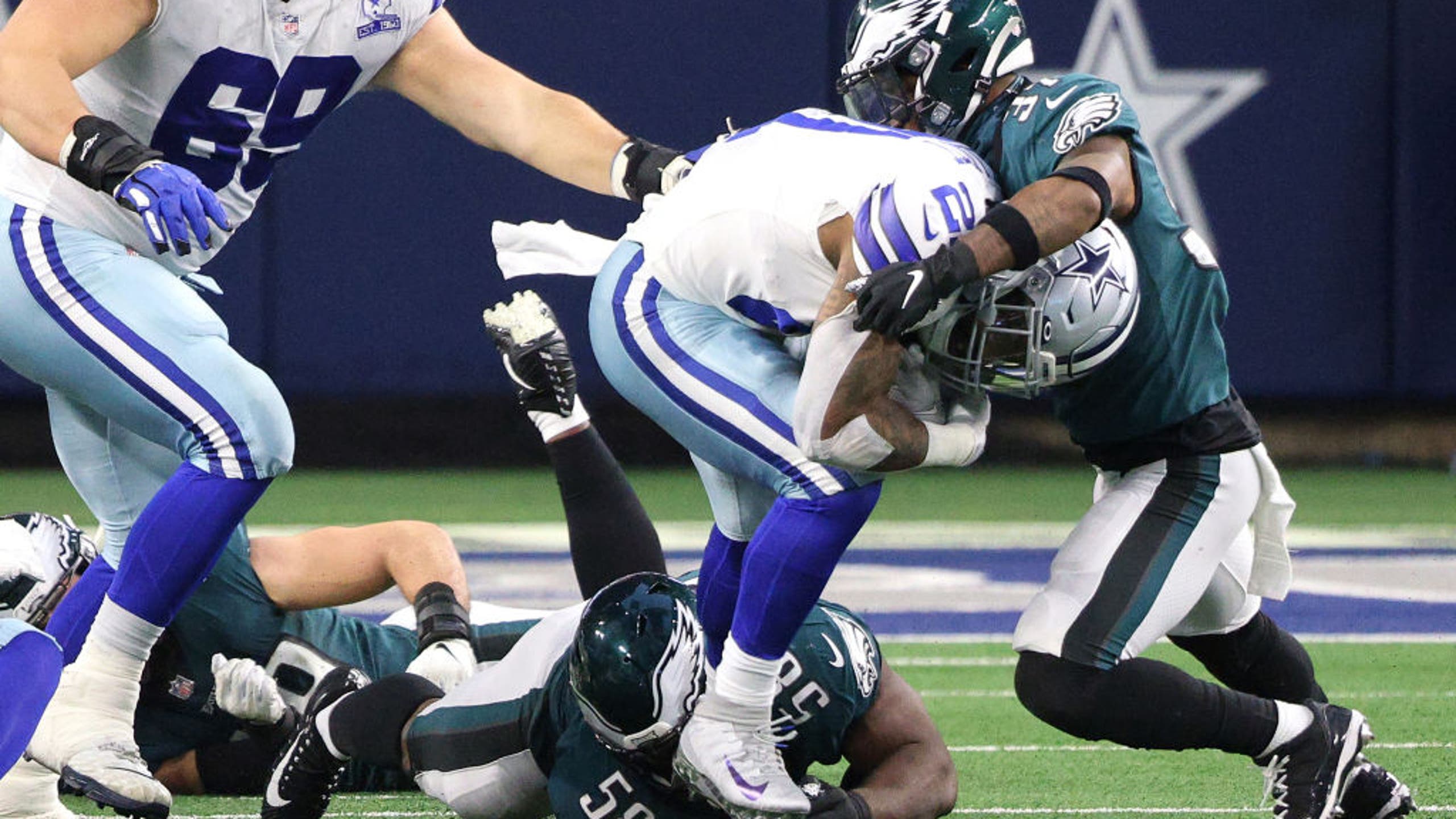 The weekly postgame scene in Dallas, where dozens of reporters jockey for position to hear owner Jerry Jones’ take on what he'd just witnessed, seems like a distant memory in this age of COVID-19.

I've spent much of my career in that scrum because, for better or worse, that's where you land the best quotes. Only Bill Parcells commanded a bigger stage, and he had the good sense to exit before Jones became too jealous.

This season, there will be no curtain call.

The Cowboys couldn't capitalize on a pitifully weak NFC East and will embark on their most important offseason since ... 2016. That was the year Dallas selected Zeke Elliott and Dak Prescott in the draft, with both players having immediate success as rookies.

It seemed like lofty expectations were justified for Cowboys fans, but then 2020 happened. And like pretty much everything else, the Cowboys fell apart. 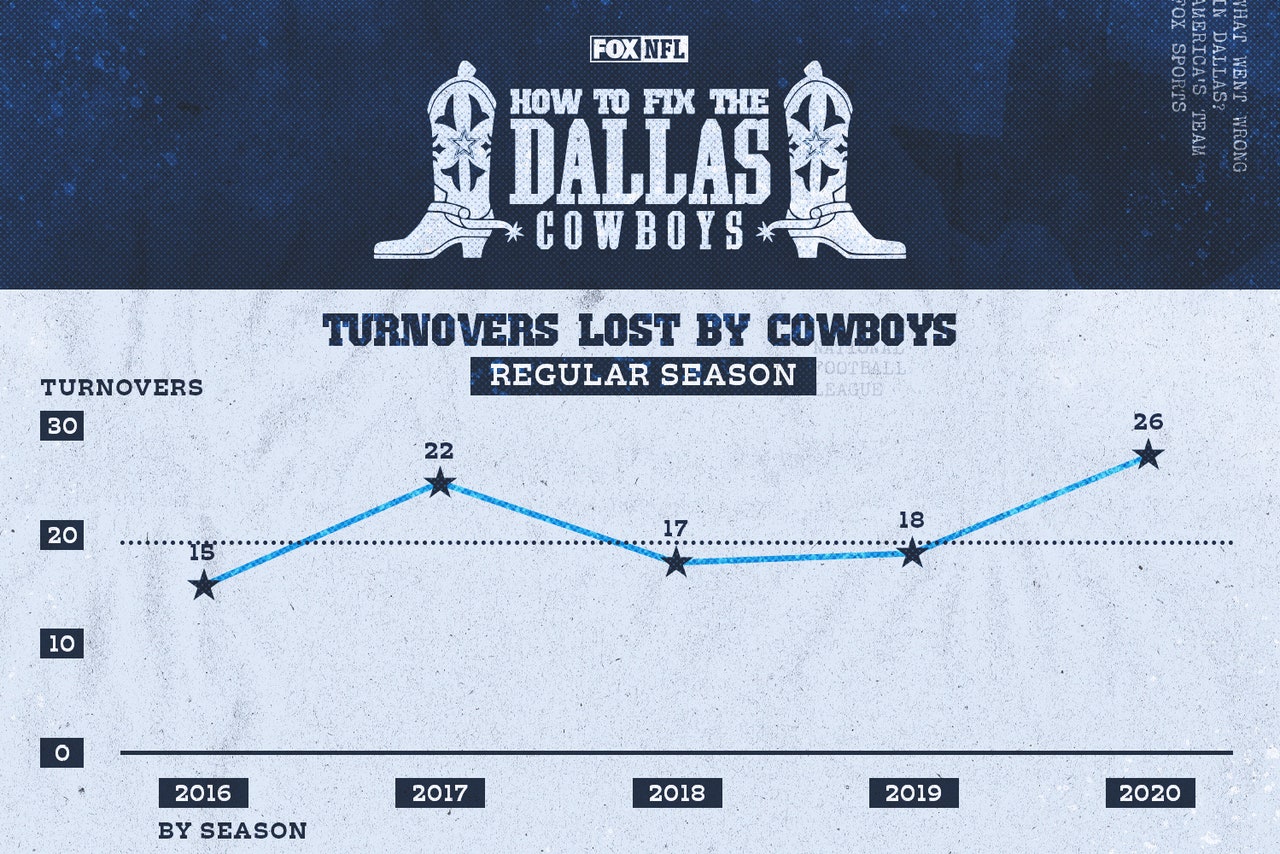 This team now has so many issues, you could start anywhere.

Let's look at the biggest five:

1. What do you do about Zeke Elliott?

The Cowboys succumbed to a contract holdout and made Elliott the highest-paid running back in the NFL with a six-year, $90 million deal in September 2019. Then, they reversed course and built the team around Prescott and the passing attack.

In retrospect, Elliott's deal is one of the most unsound contracts Stephen and Jerry Jones have done. It was almost like they had a flashback to an 0-2 start in 1993, when they decided to meet Emmitt Smith's demands.

Two years ago, I asked Stephen if he was worried about setting a dangerous precedent that would prompt more players to force his hand in the future.

"They better be DAMN good," Stephen said, suggesting Elliott was in a class of his own.

Now, the Cowboys are at a crossroads with Elliott. His numbers are down and Dallas hired a head coach who rarely leaned on the running game in Green Bay. Elliott was hampered by a calf injury late in the year, and he saw backup Tony Pollard flourish.

Jerry Jones has stubbornly stuck to his guns that Elliott remains an elite player despite his six fumbles (five lost) this season. The Cowboys already owe Elliott his full salary for 2021 ($14 million) and will do the same for 2022 if he remains on the roster this March. Releasing the running back would be tough for Jerry to stomach. 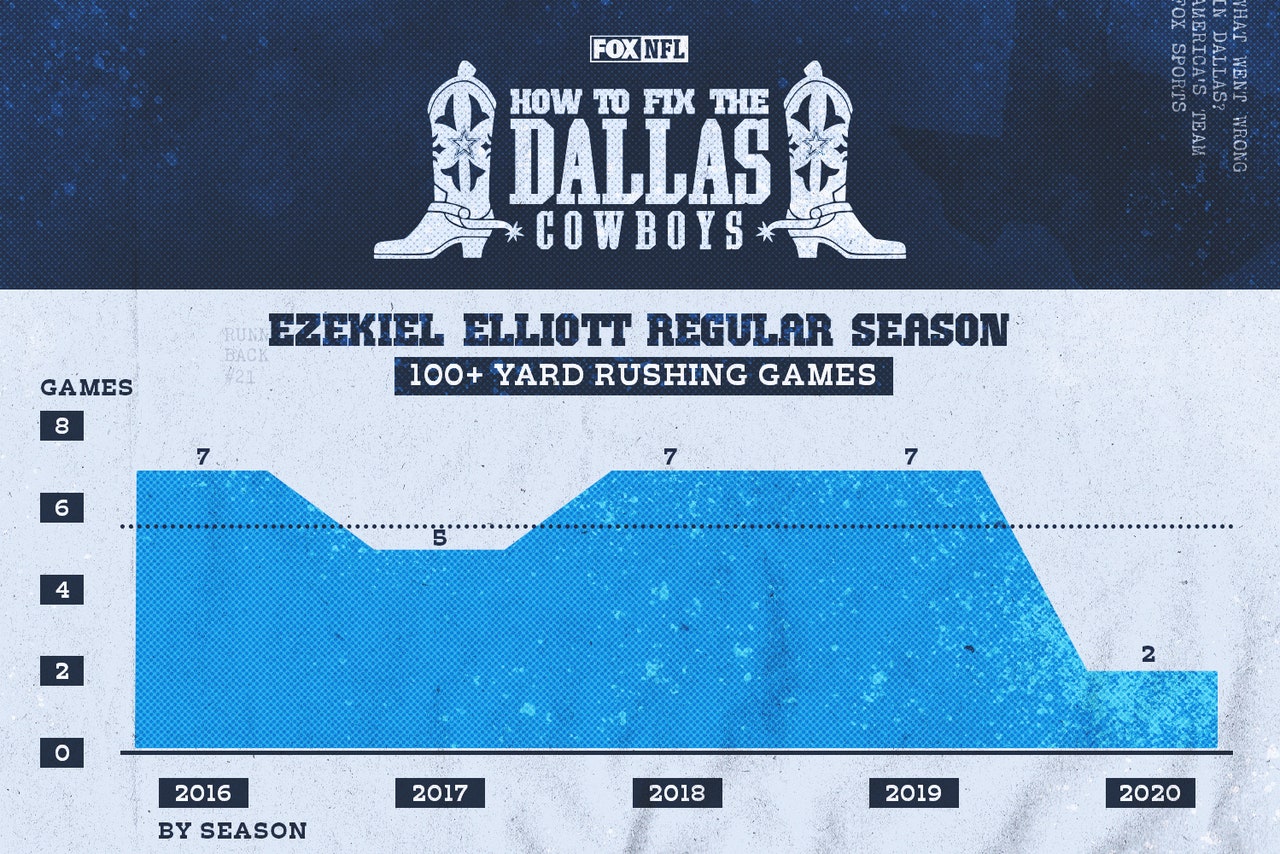 It would require some lobbying from Stephen, as he did when the Cowboys cut Terrell Owens. I don't think you'd get much resistance from McCarthy, who has gushed about Pollard this season.

I would say it's 70-30 that Elliott remains on the roster, but the size of that contract has become a major issue.

2. What happens to this coaching staff?

Even Jerry Jones admits the decision to transition to a 3-4 scheme without a normal offseason was a disaster. Until late in the season, the defense appeared to be poorly prepared.

A new defensive coordinator will likely lead to several new assistants. It's not like any aspect of this defense has played particularly well outside of defensive end DeMarcus Lawrence. If McCarthy's not going to call offensive plays, it's probably time for him to have a bigger voice on defense.

For a coach with a strong résumé, McCarthy seemed too deferential this season. He seemed to let special teams coach John Fassel do whatever weird thing he felt like.

Despite offensive coordinator Kellen Moore choosing not to pursue the head coaching job at Boise State, it might be time for McCarthy to take a heavier hand in the offense. Calling plays like he did the majority of time in Green Bay might remind him of his identity, outside of ignoring the running game.

3. Can the Cowboys make things right with Dak Prescott?

As I discussed in Part 2 of this series, it's not a certainty Prescott will be the long-term answer at quarterback. The Cowboys appeared to make a good-faith offer last offseason, but it wasn't enough.

Prescott is the first star quarterback Jones has let get to the cusp of free agency. Folks seem to think a deal will eventually get done, but I'm not convinced. Prescott's injury might give the QB some pause, but it's not enough to make him lose his resolve. And with the Cowboys owning the No. 10 overall pick in April’s draft, they could be tempted to look at a quarterback.

Prescott is the ultimate professional and a great teammate. He wouldn’t flinch at playing on the franchise tag again. But he knows Jones' history. Any sort of sentimental feeling he might have had about the Cowboys drafting him in 2016 is long gone.

Prescott would play 2021 as a mercenary quarterback. He waited patiently for his contract extension while Elliott jumped ahead of him in line.

The Cowboys would be in better shape with the salary cap had they given Prescott his wish of a four-year contract. Now, they are in danger of losing him after next season. This franchise has been extremely fortunate to land Tony Romo (undrafted) and Dak Prescott (fourth round).

If only they had more to show for it.

4. Can you overhaul this defense?

The Cowboys might have found a playmaker in second-year safety Donovan Wilson. And Lawrence continues to be solid despite his low sack totals. Everything else is up for debate.

The front seven has been a joke. Linebacker Jaylon Smith is efficient at tackling ball-carriers after 15-yard gains. Leighton Vander Esch was either ineffective or injured much of the season. They appeared to be a dynamic duo two seasons ago. Now, they rarely make plays.

Rookie Neville Gallimore out of Oklahoma was one of the few bright spots. He can be part of the defensive tackle rotation moving forward. But this team needs help all over the field.

First-round pick Trevon Diggs showed flashes at cornerback. The team's other corners are all fringe starters who can't stay healthy. The Cowboys finally started cutting and trading veterans at the deadline, which worked better than anything Nolan tried to do.

Dallas should take the best defensive player available in the draft, which means it will likely select an offensive tackle. The defense needs a new coordinator and more talent. And with most of the money allocated to the offense, help is not coming via free agency. 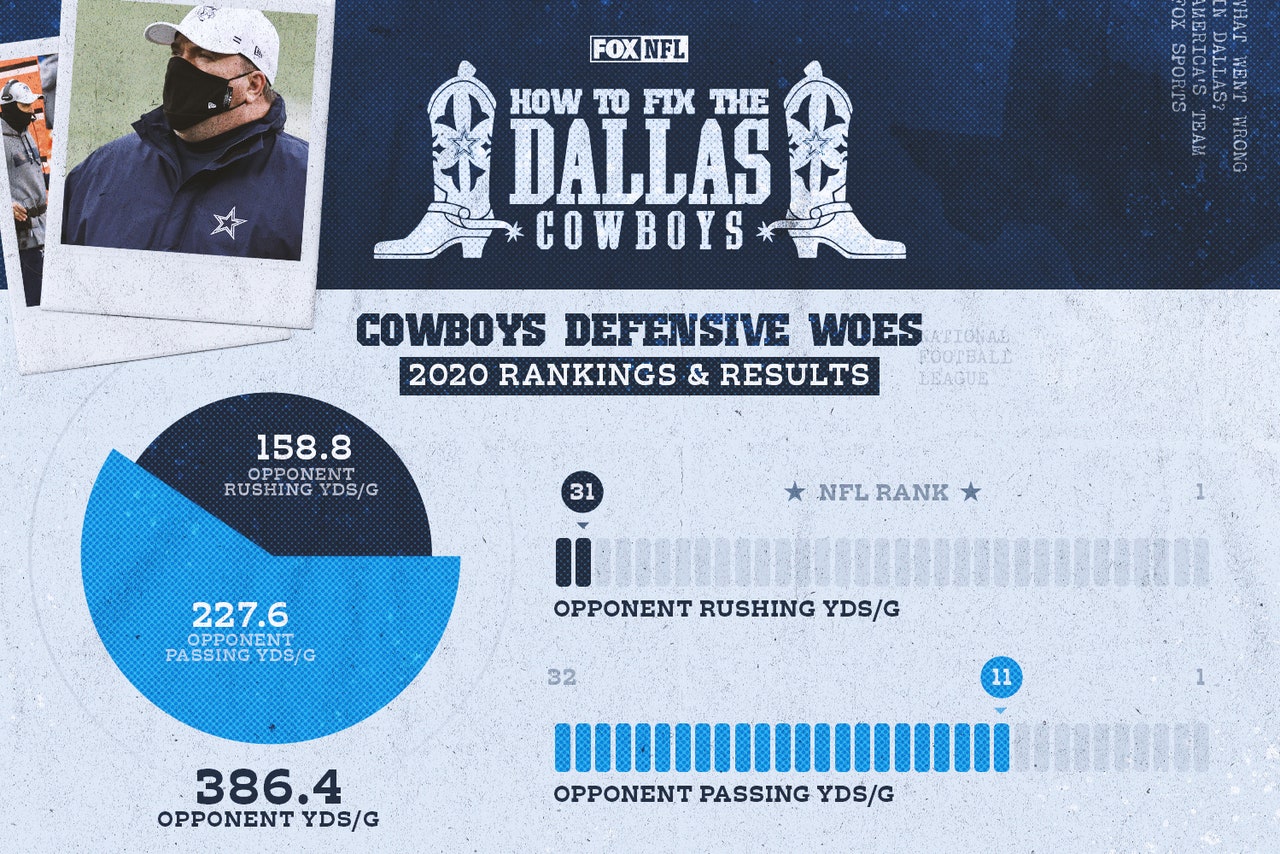 5. Can the Cowboys fortify the offensive line?

Dallas has spent so many premium picks on the offensive line, but only Connor Williams at left guard made it through the 2020 season unscathed. The good news is Williams has turned the corner and isn't getting run over on a regular basis.

The Cowboys now have to identify a replacement for retired center Travis Frederick and decide if it's time to look for left tackle Tyron Smith's successor. Smith is an elite player who constantly battles injuries. He has had a great career, but his body is failing him.

For years, announcers loved to say the Cowboys had the best O-line in the NFL. In 2020, that was rarely true on the field.

The Cowboys seem to crater when linemen are injured, and it's time to create more depth. That might be the silver lining from this season. Perhaps a player such as Connor McGovern or Brandon Knight can emerge as potential starters. After a very shaky season, the unit has looked competent in recent weeks. 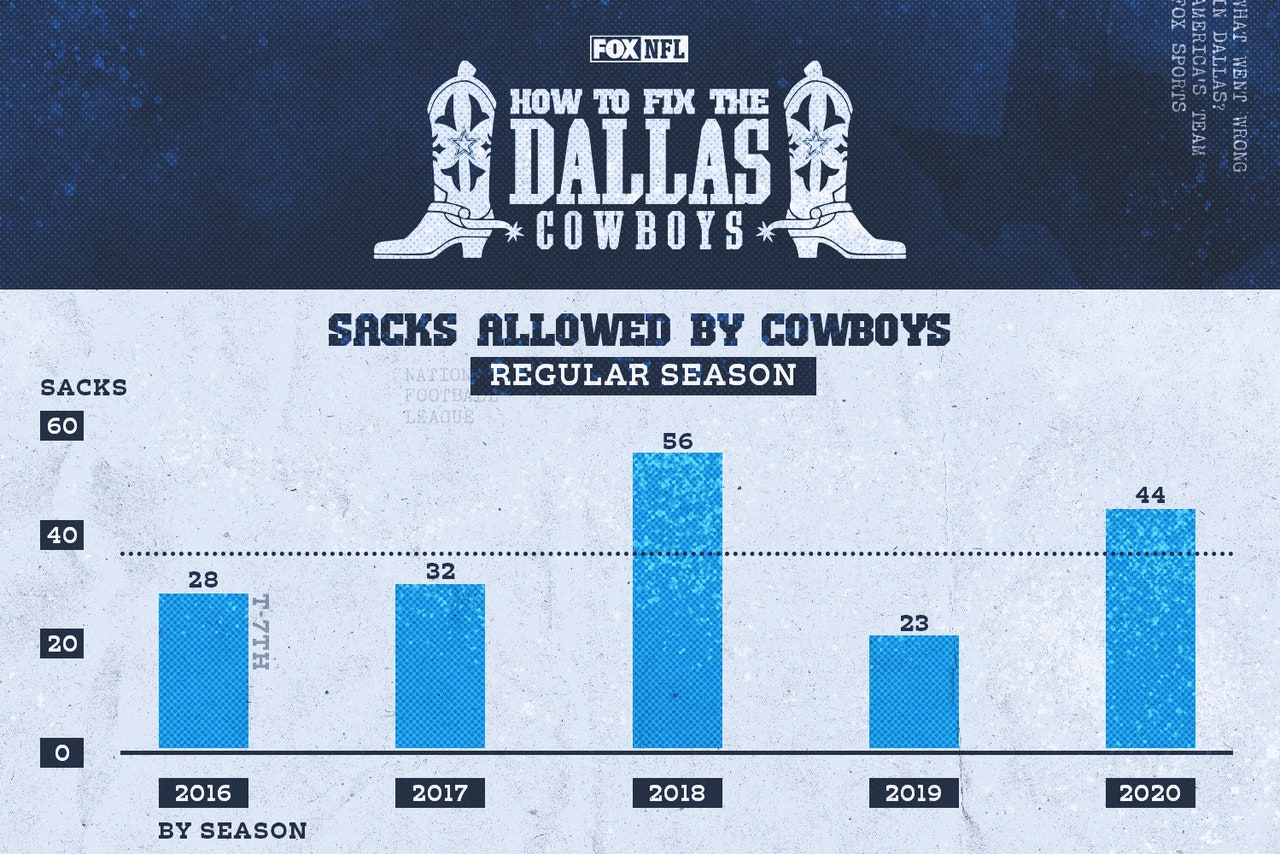 Do the Cowboys have too many issues to fix in one offseason? The answer is probably yes, but they will somehow be the NFC East favorites next season.

This franchise is always on the verge of something, even if it's disaster.

Matt Mosley has covered the Cowboys for The Dallas Morning News, ESPN, FOX Sports and Texas Monthly Magazine. He also co-hosted afternoon-drive radio in Dallas for 10 years and is now heard on ESPN Central Texas, home of his alma mater, Baylor. He makes regular appearances on "The Herd" on FS1 and Fox Sports Radio.

Generation Gap
It's GOAT vs. Baby GOAT! But beyond Brady and Mahomes, Geoff Schwartz examines the matchups that will decide Super Bowl LV.
16 hours ago

The Numbers: Andy Reid
It's back-to-back title games for Andy Reid. Here are the numbers that define the future Hall of Famer entering Super Bowl LV.
17 hours ago
those were the latest stories
Want to see more?
View All Stories
Fox Sports™ and © 2021 Fox Media LLC and Fox Sports Interactive Media, LLC. All rights reserved. Use of this website (including any and all parts and components) constitutes your acceptance of these Terms of Use and Updated Privacy Policy. Advertising Choices. Do Not Sell my Personal Info