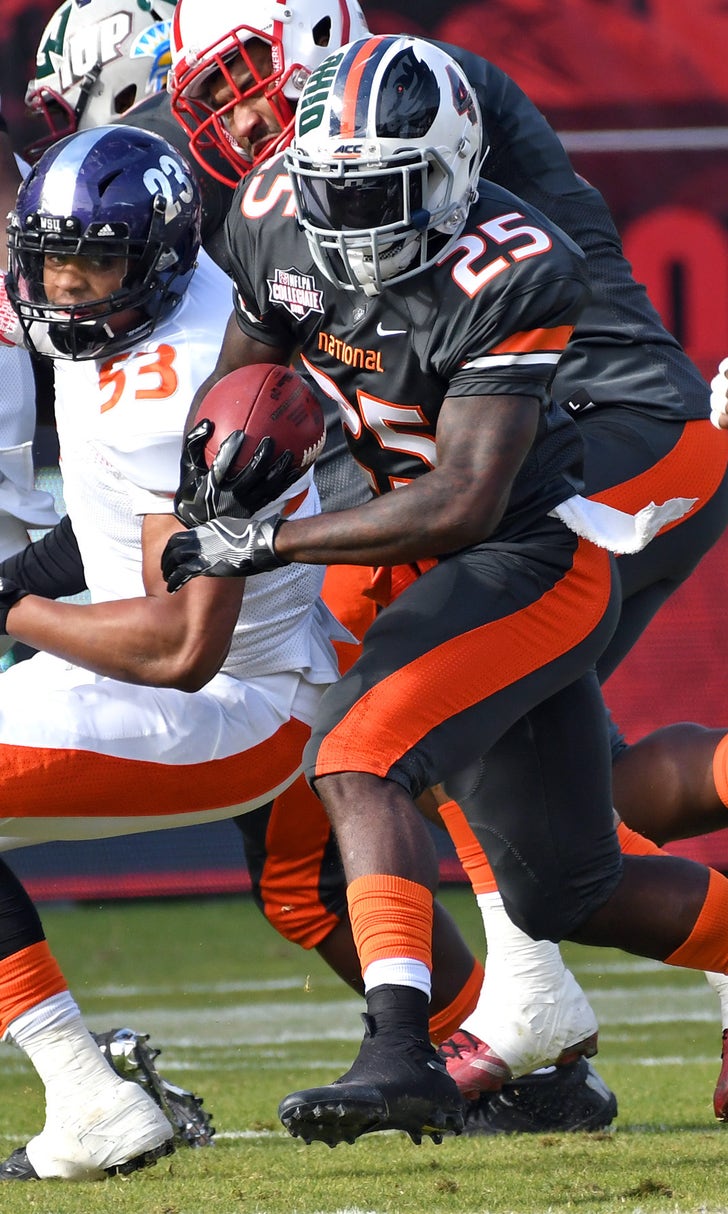 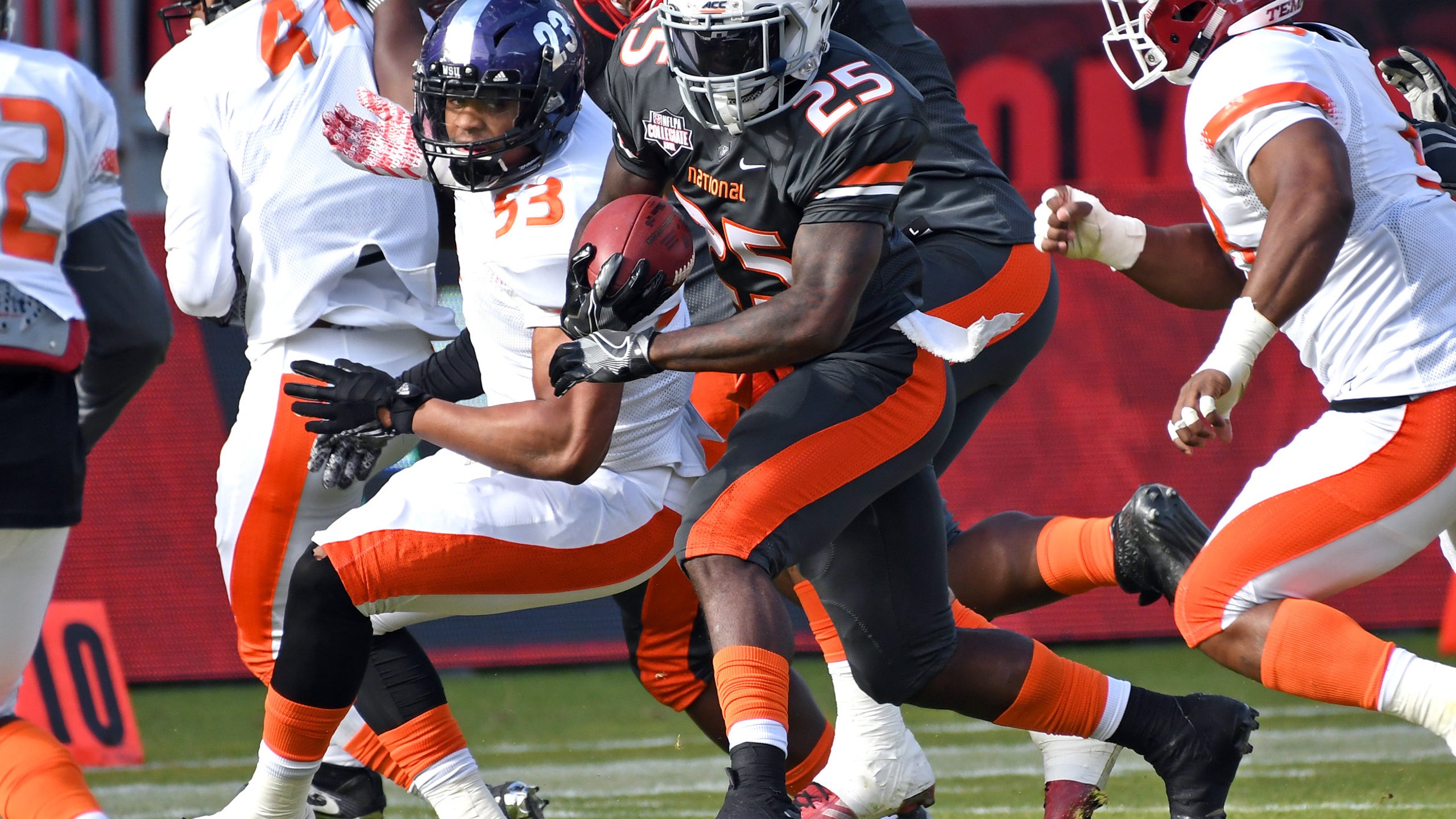 BY Fansided and Mike Flannery/FanSided via Bear Goggles On • June 30, 2017
share

This past weekend the first two college all-star games were held. I already covered the Shrine Game, the more prestigious of the two, but the Collegiate Bowl is fairly new (2012) and featuring better prospects every year.

As the Collegiate Bowl gains notoriety it will attract higher level prospects and there were more potential NFL prospects involved this year than in any previous Collegiate Bowl I’ve seen. Here is a breakdown of some players who helped their draft stock this weekend.

Mizzell is a versatile back who looks just as comfortable lining up in the slot (195 career catches) as in the backfield. He flashed his elite quickness during the game Saturday making multiple defenders miss both behind the line of scrimmage and in the open field

Mizzell isn’t a big back, but he was a thick build and showed surprising power on tape with the ability to run through some arm tackles and bounce off the occasional hit. He has a shot to be a change of pace back, who can also line up in the slot and return kicks at the next level. Mizzell’s versatility and explosive speed could secure him a spot on day three of the draft.

The FCS All-American has been dominant since he stepped on the field with four consecutive 1,000 yard+ seasons. His list of accomplishments is impressive, including leading the MEAC conference in rushing as a freshman despite only starting six games and breaking the NC A&T all-time rushing yards record in the middle of his junior season.

Cohen only got four touches in the Collegiate Bowl but made the most of them, gaining 27 yards (7.8 ypc). It takes a unique skill-set to survive in the NFL at 5’6, 178 pounds, but Cohen’s speed (reportedly clocked as low as 4.30), ability to change direction without losing speed, instant acceleration through the hole, and surprising toughness give him a chance.

S  Lorenzo Jerome, St. Francis (5’10 | 202 | 4.50) – The MVP of the Collegiate Bowl is one of the fastest risers in the draft right now. Jerome went from a projected day three pick a month ago to as high as the 2nd-3rd round according to NFLDraftScout. His impressive two-interception performance on Saturday also helped earn Jerome an invite to the Senior Bowl this weekend.

Jerome has been a do-everything star for FCS St. Francis (PA) during his career there. He has 18 career interceptions and eight touchdowns in five different ways (three kick return, one punt return, two pick-sixes, one fumble return, and a 43-yard touchdown reception).

His returner skills are legitimate with a career average of 27.2 yards and a top-two kick return average in the FCS the last two seasons, but it’s his skills as a safety that will get Jerome drafted. His 18 career picks lead all current FCS players and he flashed impressive ball skills at the Collegiate Bowl with two difficult interceptions. If Jerome plays well at the Senior Bowl this weekend, he could lock up a day two selection.

QB Philip Nelson, East Carolina (6’1 | 216 | 4.76) – Was by far the most polished quarterback at the Collegiate Bowl. He led two scoring drives and the offense just looked significantly smoother with Nelson under center than it did with the other QBs.

Nelson showed the ability to make plays both in the pocket and on the move, got rid of the ball quickly when necessary, and displayed good accuracy downfield. I hadn’t considered Nelson much of a prospect before this weekend (despite watching plenty of ECU tape on Zay Jones), but watched a little more and was impressed.

He doesn’t have the ideal quarterback size but gets good zip on the ball and his mobility to make plays outside the hashes makes his lack of height less of an issue. I was most impressed with his poise and leadership ability.

All-star games are generally dominated by the defense since the offense only has a week to work together, but it looked like Nelson could have led his squad down the field for scores all game if he played more.

Both his coach, Mike Martz, and the opposing coach, Jon Kitna, were extremely high on Nelson as well with Martz “convinced” that Nelson will be an NFL starter and Kitna comparing him to Tony Romo.

That’s high praise from two guys who have spent plenty of time in the league. Nelson isn’t currently projected to be drafted by any of the major sites, but that could change quickly in a weak quarterback class. RB Teriyon Gipson, New Mexico (5’8 | 190 | 4.42) – Had a solid game in a losing effort for his squad with 54 yards on eight carries and three catches for 32 yards. Gipson’s lack of size may keep him out of the draft, but he’s explosive enough that he should get a chance in some team’s training camp.

Gipson is a fun back to watch and a threat to score whenever he touches the ball. He led the nation in yards per carry with 9.2, which is a full yard more than the next best player. Gipson has also put up 1,209 yards and 12 touchdowns in just ten games this year.

The Lobos run a triple option offense will be much different than what he’s going to run on the next level, which won’t help his draft stock. Gipson also hasn’t caught the ball much with just eight catches this season.

He does have the speed and vision to help a team as either a change-of-pace back or more likely a return man. Gipson lacks the size to be an every-down NFL back but is so explosive with the ball and naturally elusive that he could be a weapon at the next level if used right. S Ahmad Thomas, Oklahoma (6’0 | 215 | 4.60) – Hard-hitting safety who led his side’s defense with six tackles. Thomas is an explosive force in the middle of the field against both the run and receivers bold enough to cross in front of him.

He’s started for three consecutive seasons and averaged 71 tackles per year during that stretch. Thomas also picked off four passes, had seven pass defenses, and 2.5 sacks. He has starting experience and both strong and free safety, which is valuable to teams who like interchangeable safeties (like the Bears).

Thomas doesn’t have elite size or ball skills, but he’s an intimidating presence in run support who isn’t a liability against the pass. Right now he’s a solid day three pick, but if he can run better than 4.6 before the draft, then Thomas could sneak into the end of day two.