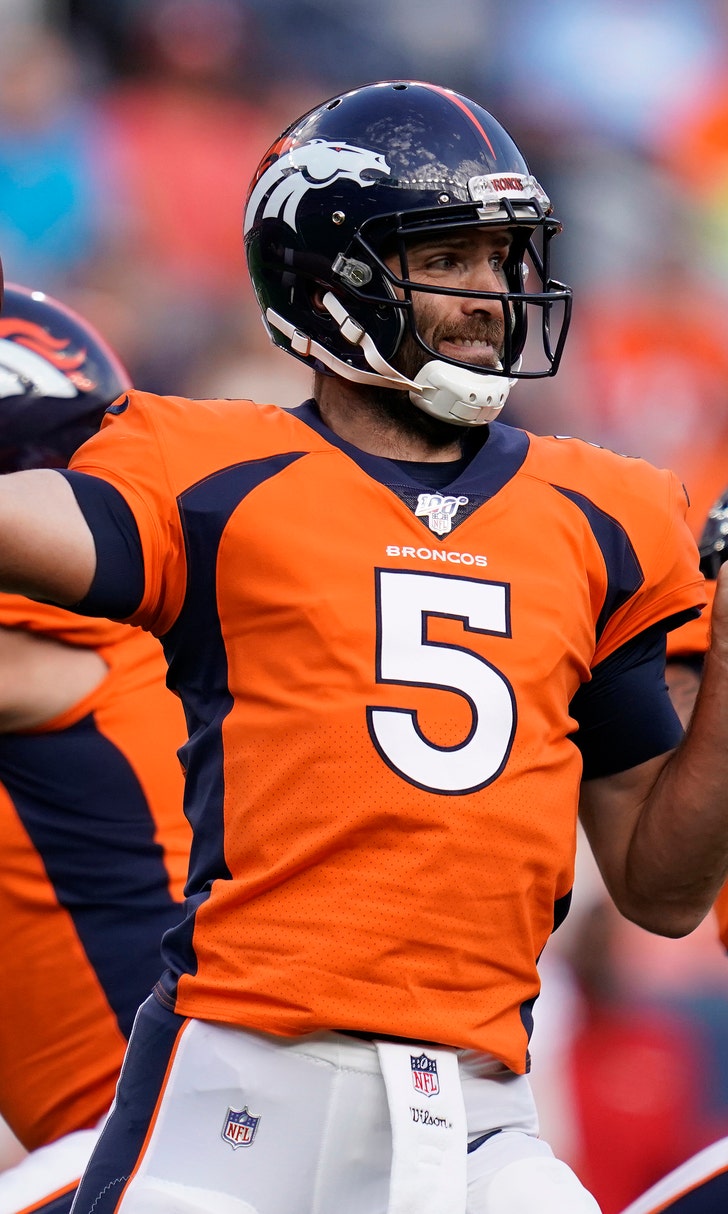 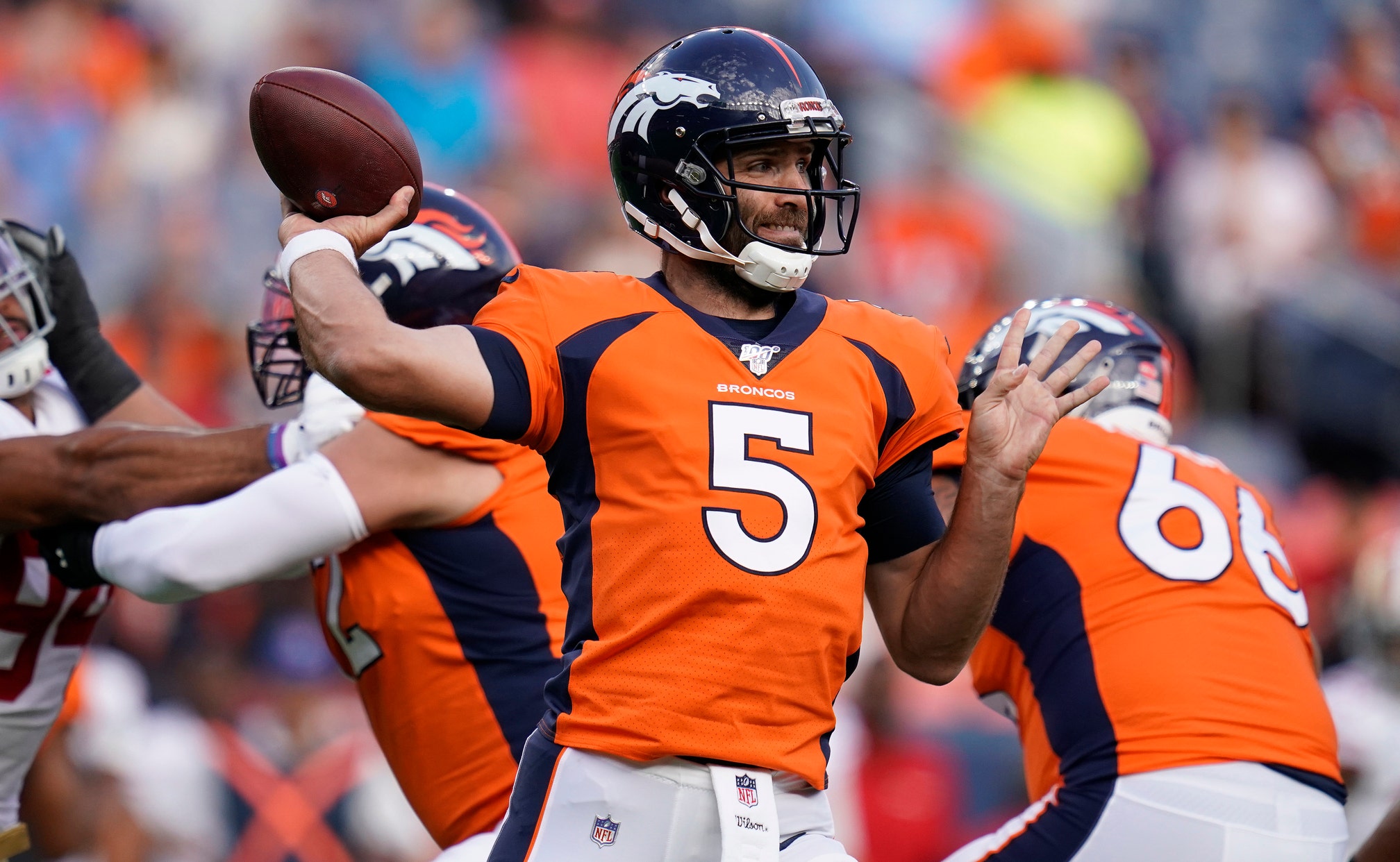 DENVER (AP) — Jon Gruden can't be sure what Oakland's offense will look like in 2019, and not just because he jettisoned Antonio Brown . His quarterback, Derek Carr, threw just two passes in the preseason.

Just as perplexing are the Broncos under new QB Joe Flacco , who made two cameos last month in directing an offense so elementary that it gave vanilla a bad name, cracked Joel Klatt, Fox Sports' lead college football game analyst.

The Denver-Oakland game Monday night wraps up a kickoff weekend lacking in offensive rhythm in so many spots after an abundance of starters, especially quarterbacks, spent August on the sidelines in baseball caps.

The Broncos are expected to unleash a creative, modernized scheme under new offensive coordinator Rich Scangarello, but even he acknowledged "there is always an unknown going into something like this. "Until you get out there ... you're not exactly sure how it'll all play out."

Teams have always kept their best play calls under wraps in the preseason, saving them for when it matters. Now they're keeping their QBs out, too, choosing protection over preparation.

Aaron Rodgers didn't take a single snap in the preseason and the rust was evident in Green Bay's 10-3 win at Chicago. The Rams' Jared Goff also was out of sync in his first game action Sunday, managing only 186 yards on 39 throws, although skipping the preseason didn't seem to hurt Philip Rivers or Carson Wentz, each of whom topped 300 yards with three TDs and no interceptions.

Still, September has become the new August, with many teams using the start of the regular season to knock off the rust and find their rhythm.

"I think this is the way that the NFL's going," Carr said. "You actually get more out of those joint practices than you do a preseason game."

Carr said it's good for young QBs to feel the live rush, "but as you've played a number of years and as Von Miller has tackled you as much, you don't need to get hit as much in the preseason."

The lead-up to the season isn't what it used to be.

"When I first went to the Saints in the mid-'80s we had an 80-yard grass field, OK?" Fangio said. "We had no cafeteria. Guys would go to a greasy deli for lunch right across the street."

Most teams back then held training camp at college campuses that featured the requisite cafeteria, class rooms and dormitories, and fans flocked to watch them practice, something Fangio believes helped make the NFL so popular.

While good for business, those weren't exactly the good old days.

Chad Brown, an NFL linebacker from 1993-2007, recalled his rookie year in Pittsburgh when he had two weeks of two-a-days in full pads before his first day off.

"I'm happy for today's players because I don't think that's the way to play a long time and be healthy going into the season," Brown said. "Football is a tough person's game. So, you need to be toughened in the training camp process. But there's no reason to beat people up to get there."

Brown said the game has gotten better because the best athletes are no longer worn out.

"Von Miller's an amazingly great player and I think he could play great football in any era," Brown said. "But to have Von Miller pass rush twice a day in pads and do that over a full training camp over all those practices? At some point, he's a smaller man going against a much bigger man. That's going to wear him down. That's going to make him less explosive.

"I know it certainly did me. I came into the league at 225 pounds. I was an edge rusher and an inside linebacker, and over the course of practices I got physically worn down because I just wasn't as big and as strong as the guys I was going against."

Another plus today's players have is nutrition.

When Brown began his NFL career, the Steelers only provided lunch. Now, teams have gourmet chefs and nutritionists on staff providing three square meals a day.

When players get to work they grab a shake with their name on it, tailored to their nutritional needs and blended with their unique mix of ingredients.

"So, to go from you know the Steelers barely providing us a completely awful, terrible lunch to what these guys have now, it's not light years, it's galaxies different," Brown said.

Of course with progress comes problems.

Dave Logan, the Broncos' play-by-play announcer and former NFL receiver, said the league's limits on live hitting have led to bad tackling, poor O-line play and bad special teams, while also making it harder to get players calloused for the regular season.

"One of the advantages — and we didn't have many back in the '70s and '80s — is that training camp was a bitch," Logan said, "so your body got used to the pounding."