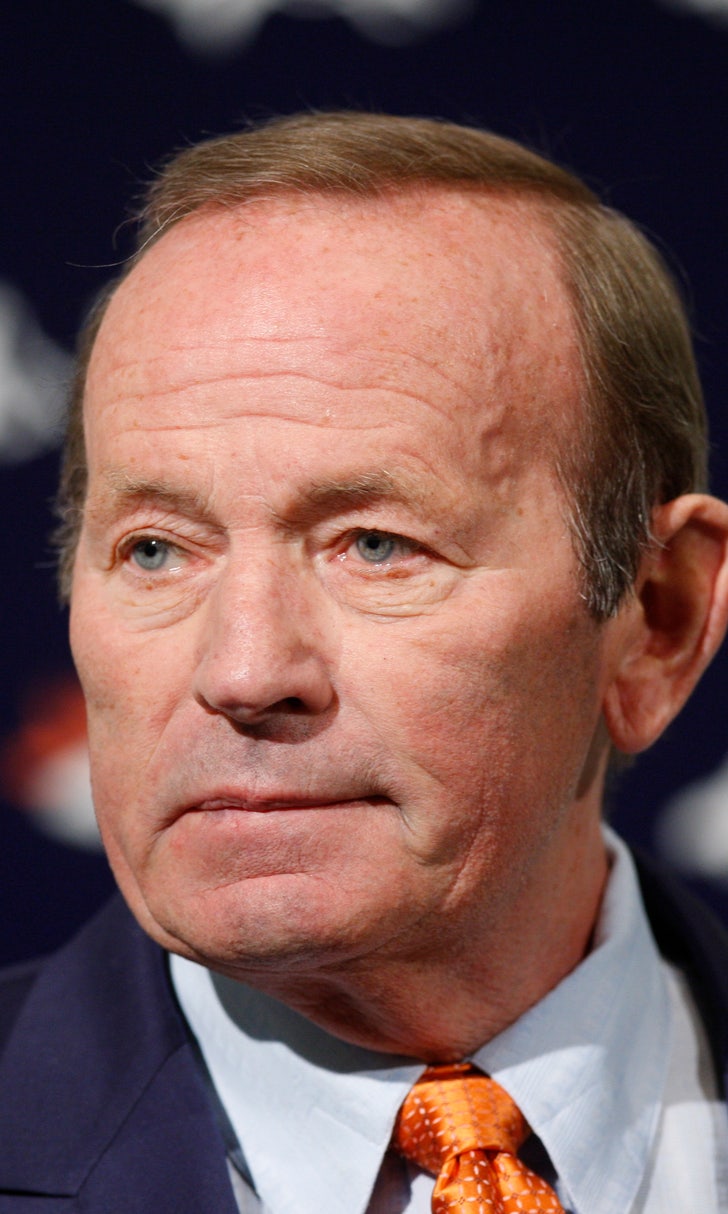 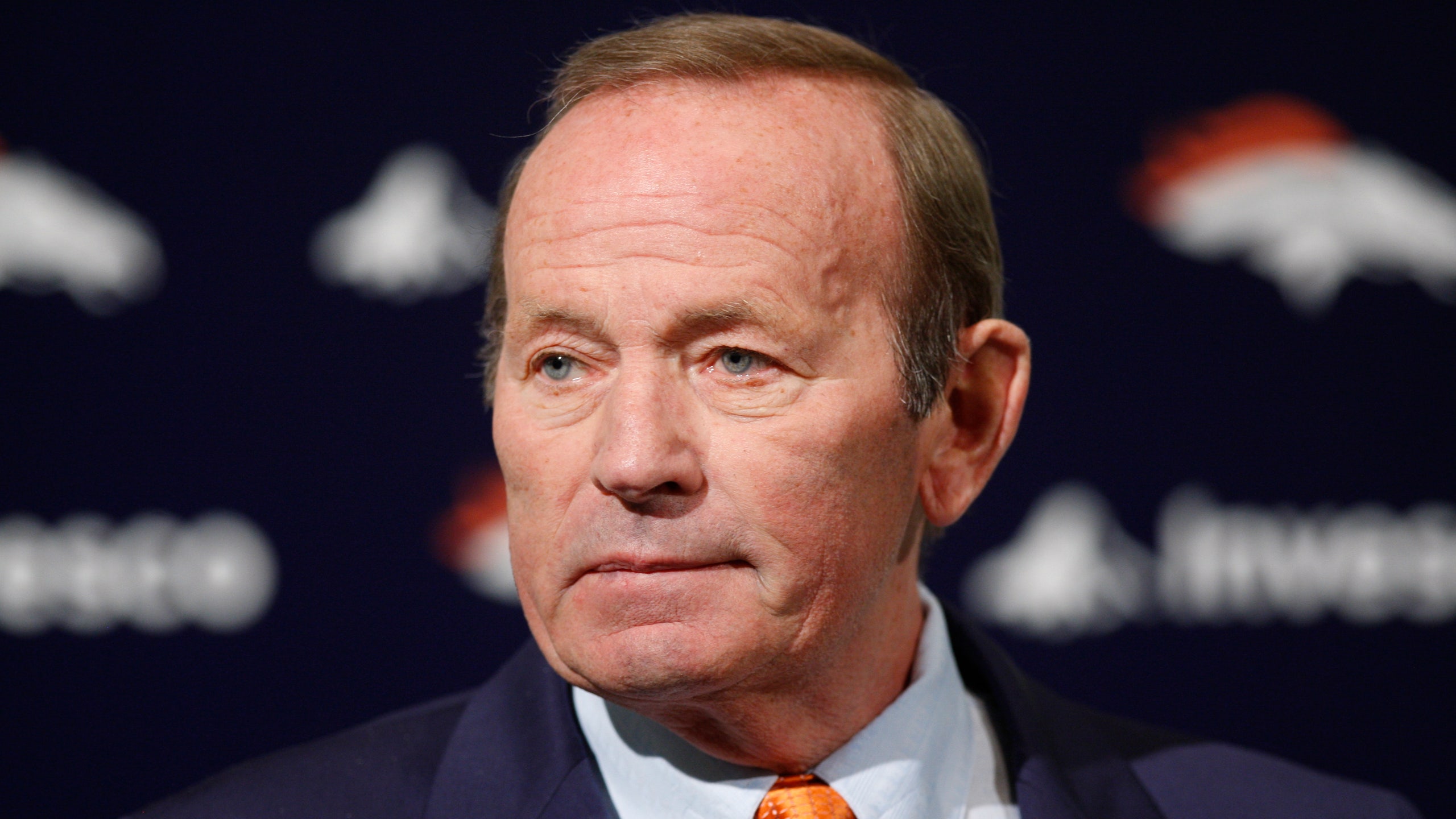 Broncos owner Pat Bowlen on cusp of Hall of Fame

ENGLEWOOD, Colo. (AP) — John Elway has a good feeling that Pat Bowlen will join him in the Hall of Fame this weekend.

"He's right on the doorstep," the Hall of Fame quarterback-turned-executive said. "He's very deserving. We're excited about the fact that he's gotten this far. We feel great about where he is."

The Denver Broncos owner is a contributor finalist along with former Dallas Cowboys executive Gil Brandt. This year's modern-era finalists include Champ Bailey, Steve Atwater and John Lynch, all of whom played for Bowlen's Broncos.

The 2019 class will be announced at the NFL Honors Saturday night in Atlanta with enshrinement in Canton, Ohio, on Aug. 3.

Several of Bowlen's children are in Atlanta for what would be a bittersweet celebration. Bowlen didn't make the trip. He's made no major public appearances since Alzheimer's forced him to step down from his daily duties running the team in 2013.

"It would be a great moment and a nice moment for him. It'll certainly be nice for his family," said team president Joe Ellis, who has run the team since Bowlen stepped away.

"I'll tell you what, if someone else could sneak in there with him, that would make him really happy, especially if it was Steve Atwater or Champ Bailey, two of his favorite players. That would mean a lot to him."

Ellis delivered the Lombardi Trophy to Bowlen at his home in Denver in the days following the Broncos' win over Carolina in Super Bowl 50 three years ago, after which, Elway shouted, "This one's for Pat!"

Elway's shoutout was payback for the man who declared, "This one's for John!" while jabbing the Lombardi Trophy in the air following Denver's first Super Bowl win, over the Green Bay Packers 21 years ago in San Diego after Elway helicoptered into NFL immortality in his fourth shot at winning a title for Bowlen.

"That was the highlight of my career," Elway said of Bowlen's four-word salute.

And the highlight of his time leading the front office came when he was able to return the favor.

Bowlen, who turns 75 this month, is the first owner in pro football history to win 300 games in three decades and he was the fastest (581 games) to 350 overall wins. Since buying the team in 1984, Bowlen has as many Super Bowl appearances as losing seasons, and the Broncos' .598 winning percentage is third in the league.

Bowlen wasn't only devoted to his Broncos but to the NFL, Ellis said, "and the testimony to that is all the committees he served on and the sounding boards (he was) for the commissioners he worked under."

Bowlen served on 15 different NFL committees, including as co-chair of the league's Management Council Executive Committee, and he was a key figure in securing the NFL's labor and TV contracts.

Bowlen comes up for enshrinement with his franchise at a crossroads, mired in mediocrity and a family feud over his succession plan.

He's been unable to find a worthy successor to quarterback Peyton Manning and the Broncos have posted back-to-back seasons of double-digit losses for the first time since the 1960s. That led to Elway firing Vance Joseph after two years and hiring Vic Fangio , his fourth head coach in six seasons.

A rift over Bowlen's succession plan is percolating as the league contemplates arbitration to settle the matter. Ownership of the franchise is held in a trust Bowlen set up more than a decade ago designed to have one of his seven children one day run the team.

Bowlen's brother, Bill, last year asked a Colorado District Court to remove the three members of the trust running the franchise. The team wants the matter resolved through the league's arbitration process instead.

"It's sad when disputes like this occur. It's not something I think Pat Bowlen, who I knew very well, would have wanted," NFL commissioner Roger Goodell said. "The Broncos meant a great deal to him and his family. I think this week, the best thing we can do is to focus on Pat and his contributions and his viability to become a new member of the Hall of Fame."

Bill Bowlen concurred, saying, "This weekend is about Pat's contribution to the NFL. It's a time for his family to hopefully celebrate his accomplishments."