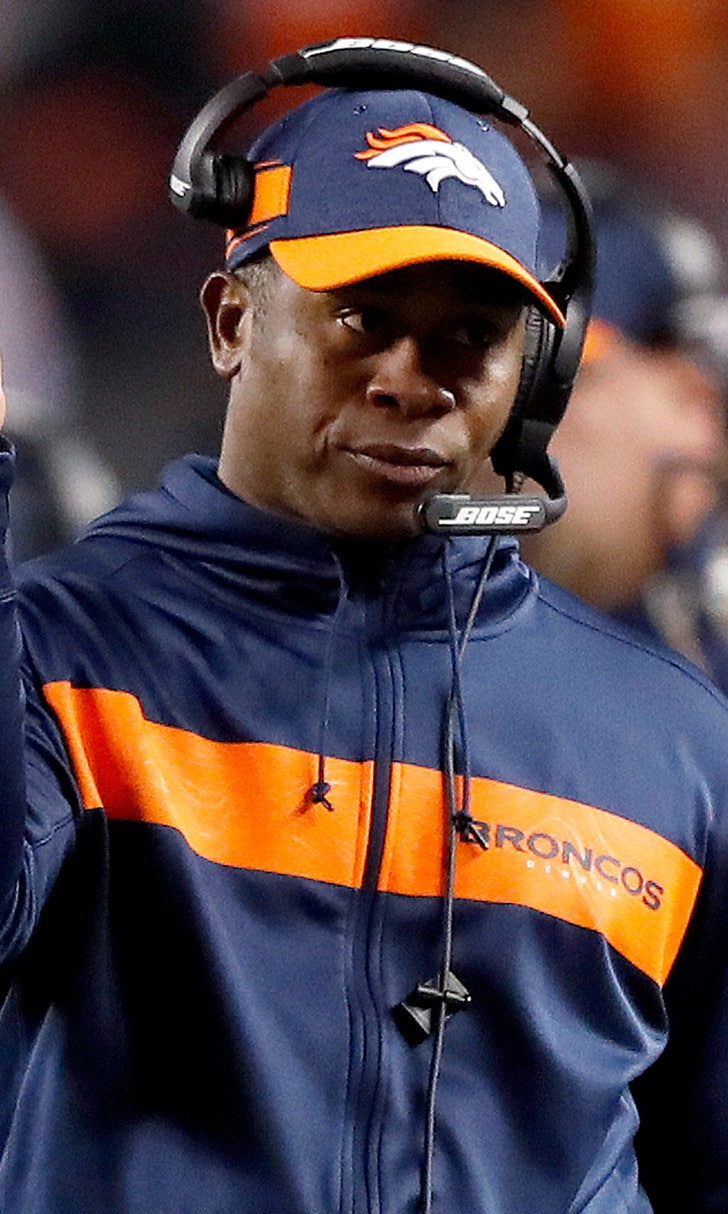 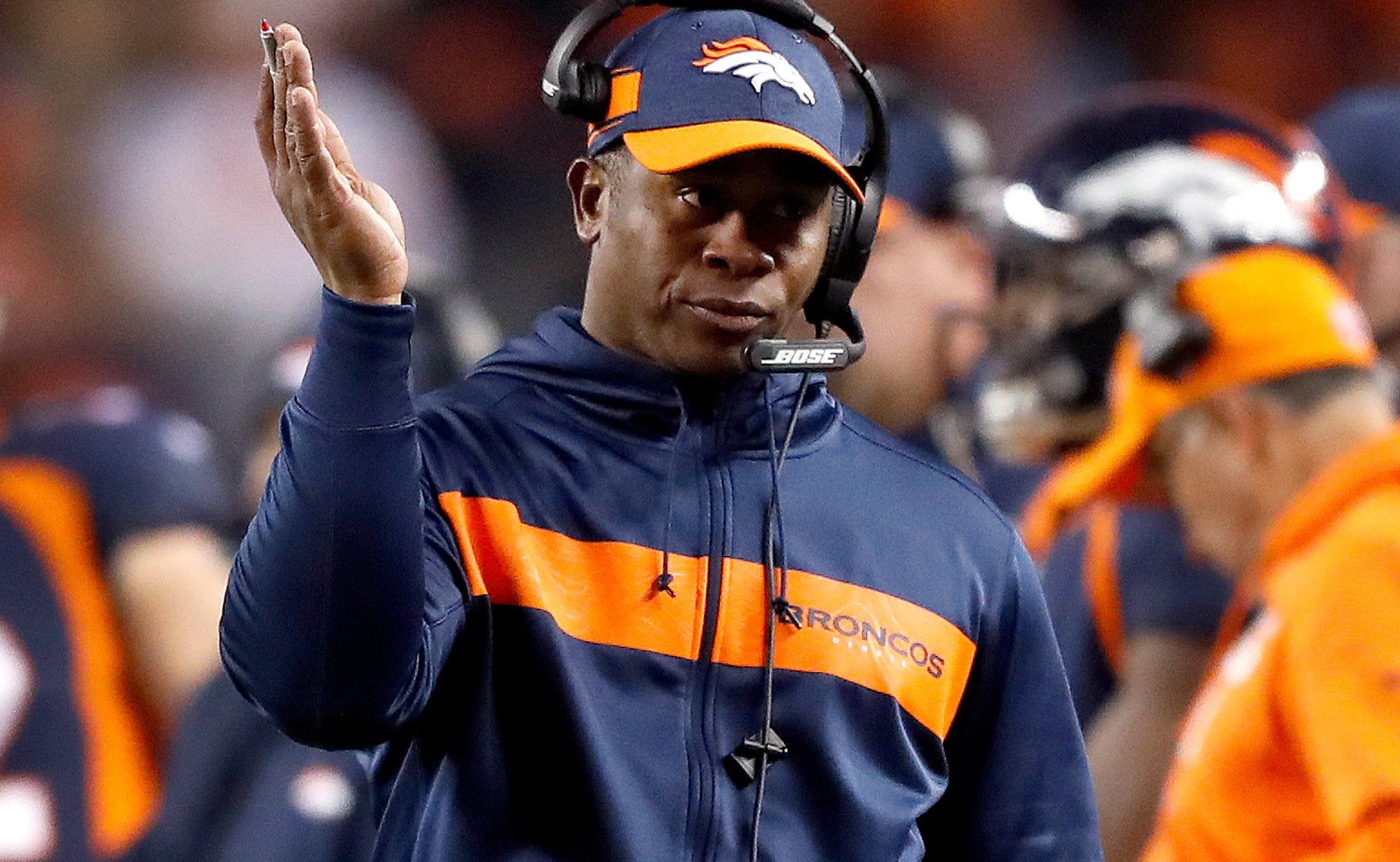 previous story
New York Giants back to work a day after being eliminated
next story
WTA: Rule changes on ranking after pregnancy, leggings

ENGLEWOOD, Colo. (AP) — Vance Joseph doesn't want to fret over his future with the Broncos missing the playoffs again. Nor does he care to ponder his past following a report Monday that general manager John Elway considered bringing back Mike Shanahan this season before ultimately deciding against a coaching change.

"I've spoken to John. That's a private conversation, obviously. But, to be honest, that's the least of my worries, an article," Joseph said.

Joseph was ultimately retained after a 5-11 rookie campaign but he's won just 11 of his 30 games overall and with the Broncos (6-8) missing the playoffs again, Joseph's job security is subject to questions.

"My concern is this football team , these coaches, and you know we have a big game on Monday night," Joseph said. "That's my only concern. What's written, what's being said, I can't worry about that."

Keenum, who was brilliant in helping the Vikings reach the NFC championship game last year, has been lackluster in Denver , throwing for 15 TD passes to go with a dozen interceptions and a career-high 32 sacks.

He's operating an offense missing its top two tight ends, top two receivers and three interior offensive linemen and which is coordinated by Bill Musgrave, who hasn't been the same creative force he was in Oakland when Denver's defenders used to admiringly call him the "Mad Scientist."

The Broncos were eliminated from the playoff race over the weekend after their 17-16 loss to the Browns, a defeat marked by a series of debatable decisions.

They included a deep throw on first down by Keenum that was picked off just after the Broncos had lost their fourth and fifth cornerbacks, one to an ejection and another to injury.

The turnover led to a Cleveland touchdown drive that proved the game-winner when Keenum made another bad decision: spiking the ball at the 50 with just under a minute left after converting a fourth-and-2 play on Denver's desperation drive after stopping the Browns on fourth-and-1 at their own 10.

That spike to stop the clock allowed the Browns to regroup and they subsequently showed two looks the Broncos hadn't seen all night, forcing a pair of incompletions before Jabrill Peppers' sack of Keenum ended it.

"That fourth-down play, if you ask Billy (Musgrave), that wasn't a great fourth-down call for Case," Joseph said. "We can do better there for Case with a (blitz) coming."

The most-debated call, however, came with 4½ minutes left and the Broncos trailing 17-13.

Joseph sent out his kicker rather than go for it on fourth-and-1 from the Cleveland 6.

He said it was a fourth-and-a-long-1, the Broncos had just been stuffed on two runs and he had faith his depleted defense would get a stop even though safeties Dymonte Thomas and Justin Simmons were forced into coverage with cornerbacks Chris Harris Jr. (leg), Isaac Yiadom (head), Brendan Langley (head), Jamar Taylor (ejected for fighting) and Bradley Roby (lacerated lip) all out.

Now, the Broncos are left trying to avoid their first back-to-back losing seasons since 1972, the year Joseph was born.

They visit Oakland (3-11) on Christmas Eve and finish against the Chargers (11-3) at home.

"These next two games are important for us to finish the right way," said Joseph, who twice gave an impassioned defense of his coaching staff Monday.

"It will be tough for me to find a better staff in this league," Joseph said. "These coaches have coached a really, really young team and we've got young guys playing at a high level because of our coaches. And our players, each week they've battled. So, that's my only focus and concern, not my future."

Despite the dive, Joseph hasn't lost his locker room, according to several veterans, as evidenced by all their one-score games.

"We all love coach," nose tackle Domata Peko said. "We've all got his back."

Outside linebacker Shane Ray said he wasn't informed he'd be a healthy scratch until the day before the game, after he'd put in his full workload at practice all last week. He called that late notice "a little disrespectful," and said if he's not going to play against the Raiders, he'd appreciate a quicker heads-up.

Neither he nor safety Su'a Cravens, another healthy scratch, took kindly to Joseph's explanation after the game that he deactivated them because "we're playing our best players, trying to win a game, simple as that."

"I'm not going to speak bad on the dude," Cravens said. "He's my coach. He's my superior. I'm going to do whatever he says. But as far as him saying he's got the best players out on the field, I disagree."