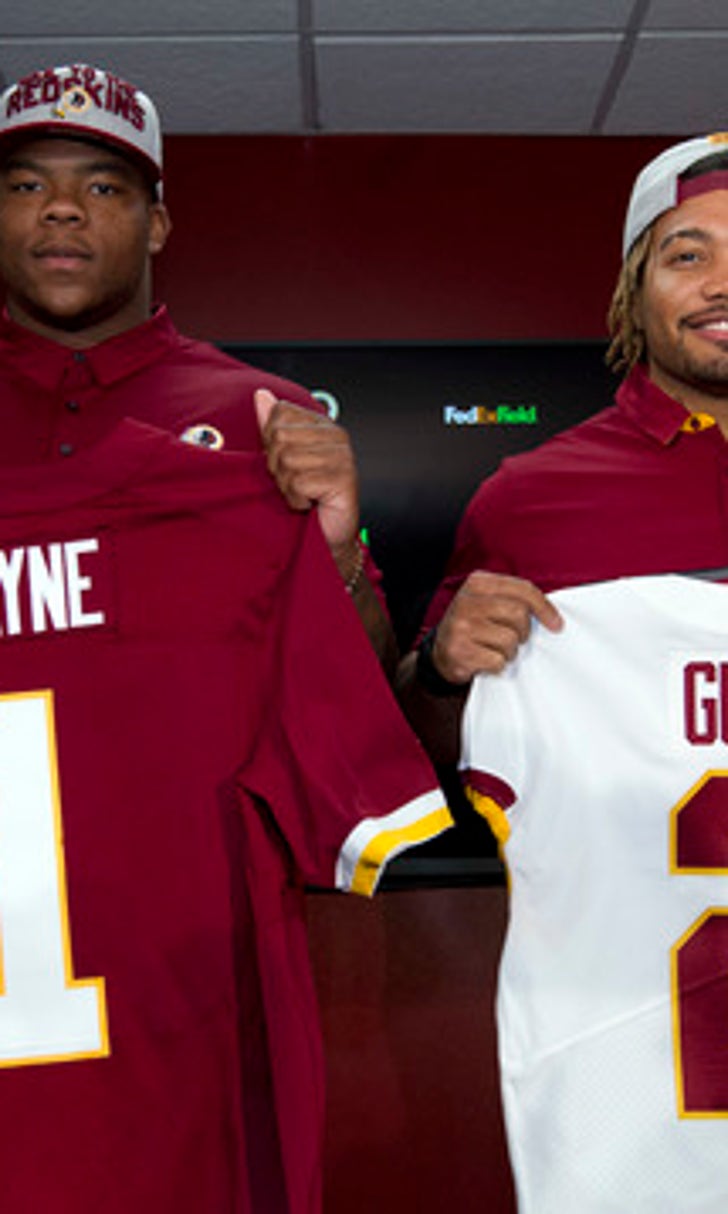 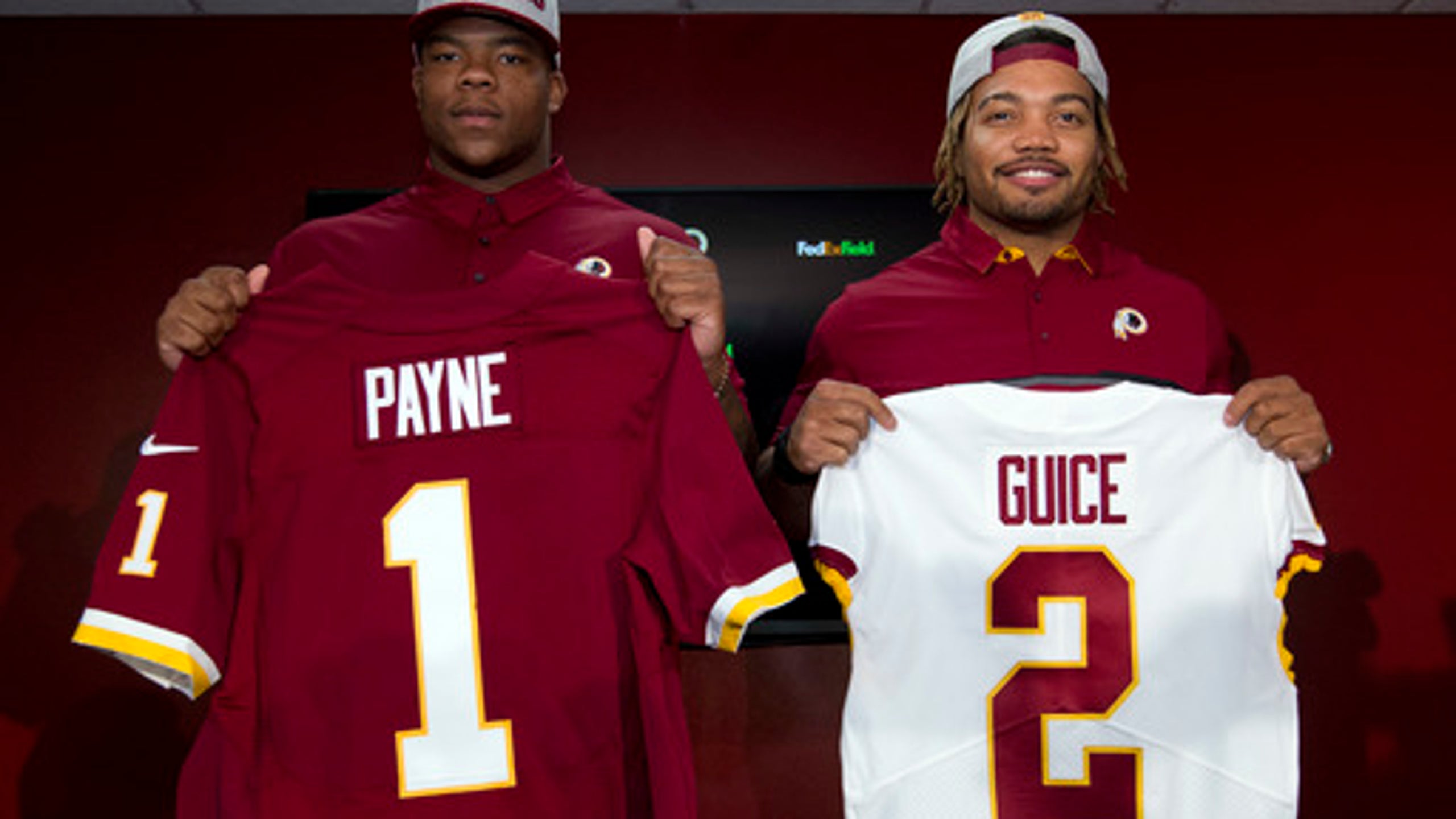 After focusing on run, Redskins open Day 3 by taking Apke

It's the kind of moment he could have had on stage at the NFL draft had he gone in the first round as projected. Instead, the LSU running back slipped to late in the second round amid some off-field character concerns and will now give the Washington Redskins a very motivated rusher.

''I already ran angry and now I'm going to run angrier than ever,'' Guice said Saturday. ''It's going to be tough for a lot of teams to bring me down.''

In getting a run-stuffing defensive tackle in Alabama's Da'Ron Payne at 13th , a powerful running back in Guice at 59th and Louisville offensive tackle Geron Christian at 74th, the Redskins hope to solve problems in the ground game on each side of the ball. They were worst in the NFL in stopping the run and fifth-worst in rushing.

''I stop the run for a living, so I think that's going to be something easy,'' Payne said.

The Redskins addressed most of their needs in one way or another at the draft, trading down to recoup the third-round pick they traded for quarterback Alex Smith, adding Guice to their backfield and stocking up on defensive depth.

Guice could end up being the best value, considering that the SEC record-holder for most 250-yard games dropped amid reports of an argument during his visit with the Eagles. Philadelphia general manager Howie Roseman denied there was any altercation, and Washington was satisfied enough in its meetings with Guice that it ended his freefall.

''No one wants to hear their name be slandered like that,'' Guice said, repeating that he didn't know where the reports came from. ''(The Redskins) didn't just go off rumors, they didn't just hear everything and believe it because they met me. They know me as a person, so they already know who I am as a person. Just to see a team not let rumors and stuff like that affect their decision to bring me in, I have to give my all to these guys. They changed my life, they believed in me, they trusted me.''

''I think my speed will help with everything,'' Apke said. ''I'm going to make a name for myself on special teams first, and then after that, just make my way into playing safety there.''

ON GUARD: Coach Jay Gruden saying that Christian will remain at tackle makes it a strong likelihood that Ty Nsekhe moves inside to fill the hole at starting left guard. That was the Redskins' one starting job left open going in.

''You can never have too many big bodies,'' Gruden said. ''I believe that, and it's about protecting the passer (and) running the football.''

ROLL TIDE: Taking Payne and then inside linebacker Shaun Dion Hamilton in the sixth round gives the Redskins four Alabama products over the past two drafts. Payne joked that former teammates and 2017 picks Jonathan Allen and Ryan Anderson were more excited about the Crimson Tide defensive reunion than he was.

''It should be a lot of fun,'' Payne said. ''Just being able to come in and already have some guys that I know there ... they'll help me out with little things and just guide me in the right direction.''

NEW D: Swearinger was so happy about adding Payne, Apke, fifth-round defensive tackle Tim Settle, seventh-round cornerback Greg Stroman and Hamilton that he tweeted : ''Welcome to the rebirth of the new and improved Redskins defense.'' Time will tell if he's correct, but after injuries in 2017, at the very least, Washington has more depth.

STILL NEED: Tight end depth and a developmental quarterback prospect. Injuries to TE Jordan Reed and Vernon Davis being 34 make it a position to watch well into training camp, along with QB, if the front office wants to start thinking about the post-Smith era.

Washington Football Team
share story
those were the latest stories
Want to see more?
View All Stories
Fox Sports™ and © 2021 Fox Media LLC and Fox Sports Interactive Media, LLC. All rights reserved. Use of this website (including any and all parts and components) constitutes your acceptance of these Terms of Use and Updated Privacy Policy. Advertising Choices. Do Not Sell my Personal Info