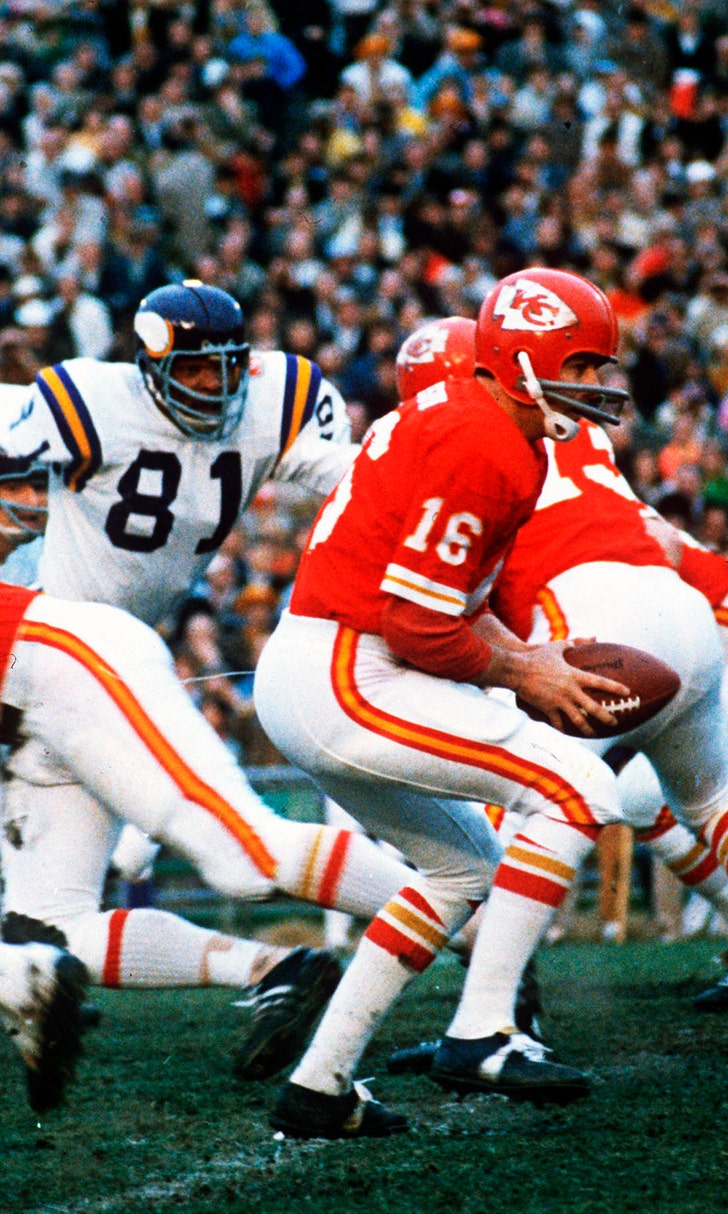 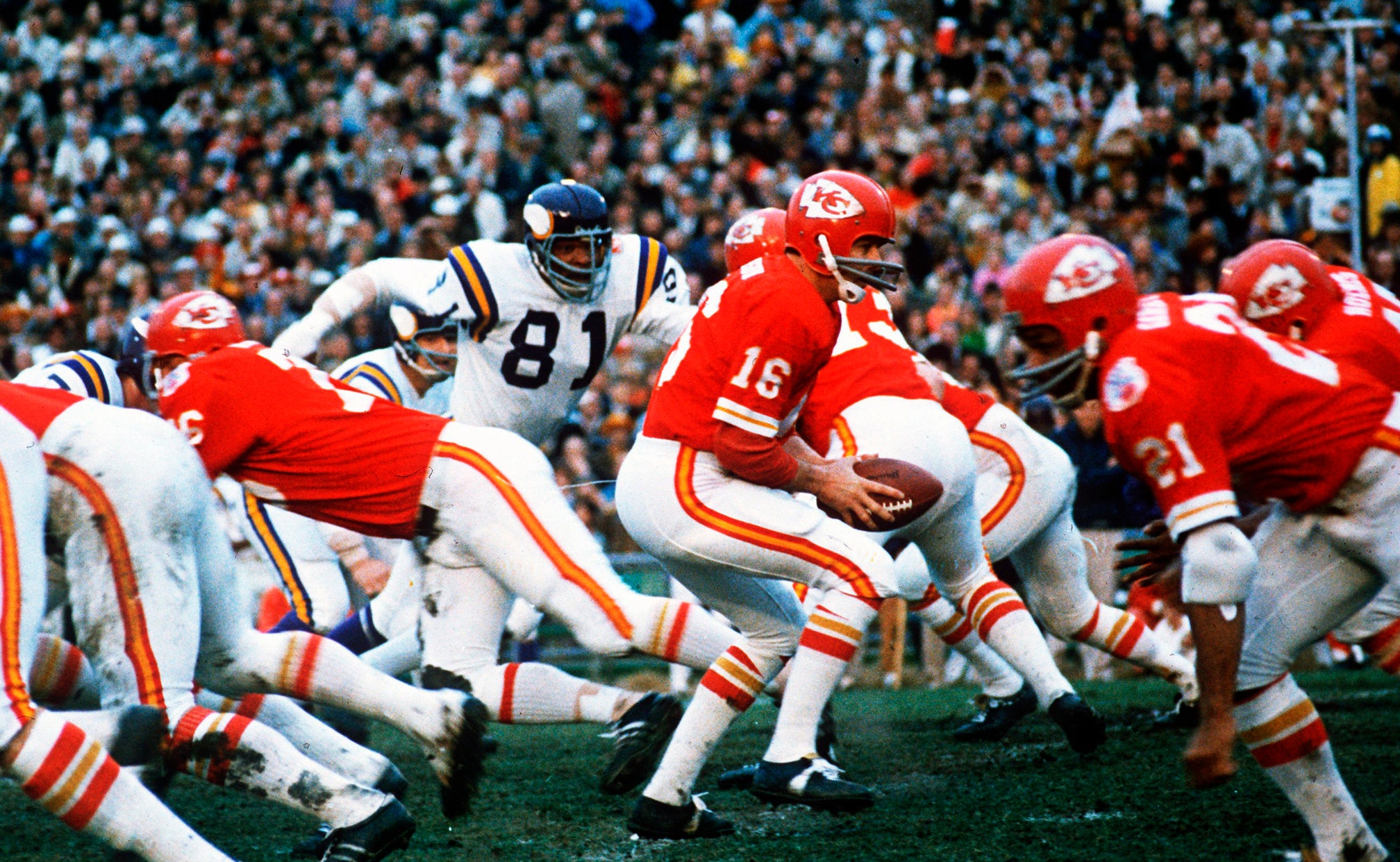 The longtime Kansas City Chiefs kicker remembers that they were almost two-touchdown underdogs to the Minnesota Vikings, whose fearsome defense line carried the nickname “The Purple People Eaters.”

He remembers that the weather wasn't very good in New Orleans, and that the week leading up to the game was spent listening to tornado sirens.

The tarp used to cover the field at Tulane Stadium was filled with holes, leaving patches of the turf a muddy quagmire.

“When we had to kick extra points,” Stenerud recalled, “I told our coach, Hank Stram, that we had to move the ball to the side a bit because there was a big mud hole where I wanted to kick from. It was a real mess.”

More than anything else, though, the Hall of Fame kicker remembers never once thinking that it would take one of the original AFL franchises a full five decades before it returned to the championship game.

“How could you?” said Stenerud, who also was a member of the team that lost to the Green Bay Packers in the first Super Bowl. “No, I never thought about it. It's a long time. For me, it doesn't seem as long as it does for young people. You think about the next game — ‘Let me play.’ You don't think about history at the time.”

As the Chiefs prepare to play the San Francisco 49ers on Sunday, Stenerud finds himself reflecting on history quite a bit these days. So many of his good friends and close teammates never lived to see the team return to the championship game, and many others are in failing health. Stram died 15 years ago this summer, and the team's beloved founder Lamar Hunt passed away the following year. Thousands of fans lived their entire lives without seeing the Chiefs in a Super Bowl.

Only the Lions and the Jets have played more seasons since they appeared in the championship game.

“To lose a Super Bowl is devastating. You have to explain that forever,” Stenerud told The Associated Press this week. “When we won the game, there was one guy who kept bugging me about the warm-up jacket I had on. It turned out the guy was Pat O'Brien, who had played Knute Rockne in ‘Knute Rockne, All American.’ I just remember the total, total elation when you win, and I also remember that I was thrilled as could be, and I remember all the people who had taken a chance on us."

By the 1969 season, the Chiefs had a roster filled with veterans — quarterback Len Dawson, tight end Fred Arbanas and offensive lineman Ed Budde — who chose to play in the AFL when it was largely considered a second-tier league. Many of the players had followed the franchise from Dallas, where it was known as the Texans.

They played with a chip on their shoulder, both because they lost that initial Super Bowl and because nobody expected them to win three years later. They were the underdogs when they went to New York to play the reigning champion Jets, and they had lost twice to Oakland in the regular season before beating the Raiders to reach the Super Bowl.

It was no surprise that the Chiefs were such heavy underdogs against the Vikings, who were led by coach Bud Grant and their ferocious defense. They had mowed through their schedule and beaten the Rams and the Browns, giving them the chance to play the Chiefs for the final championship before the AFL and NFL officially became one.

“Nobody gave us a chance,” Dawson told The AP a few years ago, when he stepped away from the broadcast booth after a long second career with the Chiefs. “Everybody thought the Vikings were going to win.”

But the Chiefs were playing their best football of the season down the stretch, in part because Dawson was finally healthy after missing several games with a knee injury. Third-string quarterback Mike Livingston had kept them afloat by leading the Chiefs on a five-game win streak, but Dawson's return not only marked the return of one of football's best quarterbacks but also instilled in the team a profound sense of confidence that it could beat anybody.

For his part, Dawson took it upon himself to shoulder the burden of finally delivering a title. His longtime roommate, Johnny Robinson, told The AP after the Super Bowl that Dawson had “aged five years this week.”

“You looked into his face,” Robinson recalled, “and you knew it wasn't the same Len Dawson.”

Much of the anxiety dissipated by halftime, though. Mike Garrett ran for a touchdown and Stenerud kicked three first-half field goals to send Kansas City into the locker room with a 16-0 lead.

The Vikings finally scored late in the third quarter, but Dawson answered with a 46-yard touchdown pass that all but put the game away. The quarterback who had put so much pressure on himself wound up being the MVP.

“I can't take any credit,” Dawson said afterward. “It was the team, not me. They were fired up. They were ready.”

Dawson and many of the Chiefs from that championship team remain close to the organization, returning for anniversaries and other celebrations. Nine members of the team eventually made it into the Pro Football Hall of Fame, and Dawson made it as both a quarterback and broadcaster — Dan Dierdorf and Frank Gifford are the only others so honored.

When the Chiefs beat the Tennessee Titans in the AFC championship game to end their long and maddening Super Bowl drought, it was Hall of Fame linebacker Bobby Bell who stood on the stage as part of the trophy presentation.

“It was great to have Bobby up there. He's special,” current Chiefs coach Andy Reid said. “They had some great talent there on that football team, and it was obvious by the championship. He's around, as a lot of players are. We encourage that. I like having the guys here. They bring great history and energy to the guys. They've got a fellowship with the young guys and educate them on how great the city is and so on. It's fun to have them here.”

Maybe that's true. But it's more fun to give them a long-awaited trip back to the Super Bowl.

“It's been tremendously exciting,” Stenerud said. “You know, the offense, it's so much speed and you have a phenomenal quarterback. It's really exciting to watch, obviously. The defense is coming on and playing great football. They have good special teams. It looks like a real solid football team to me.”