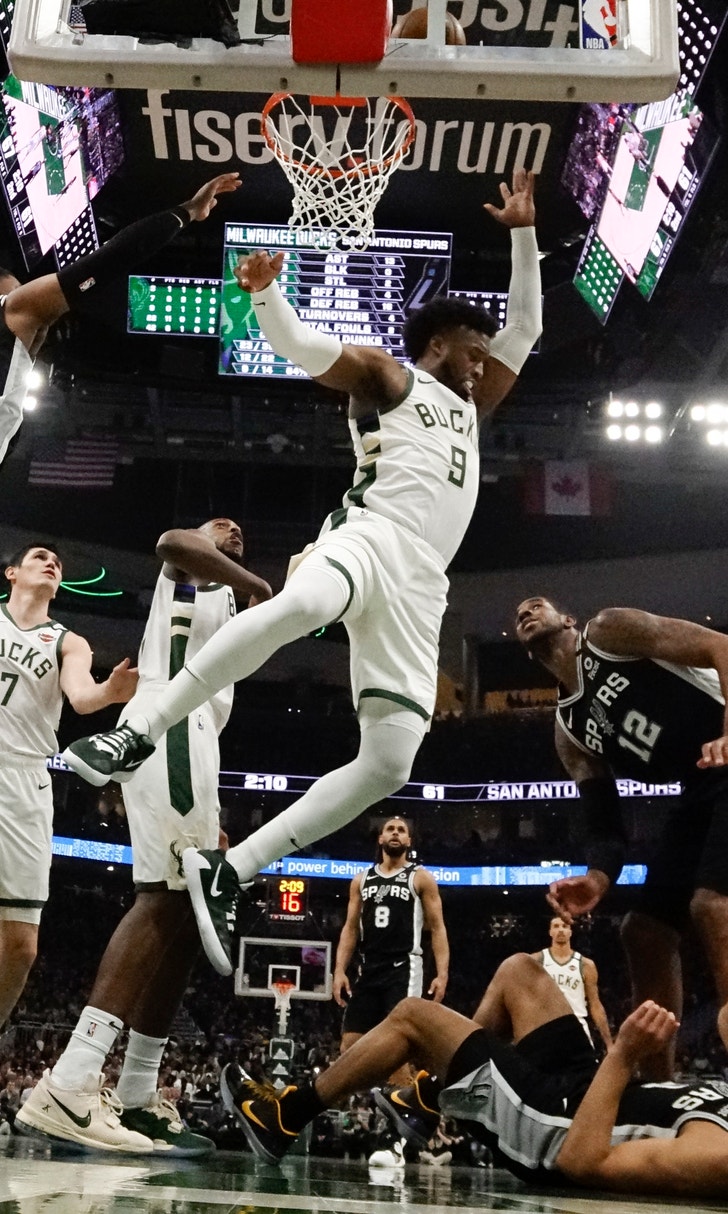 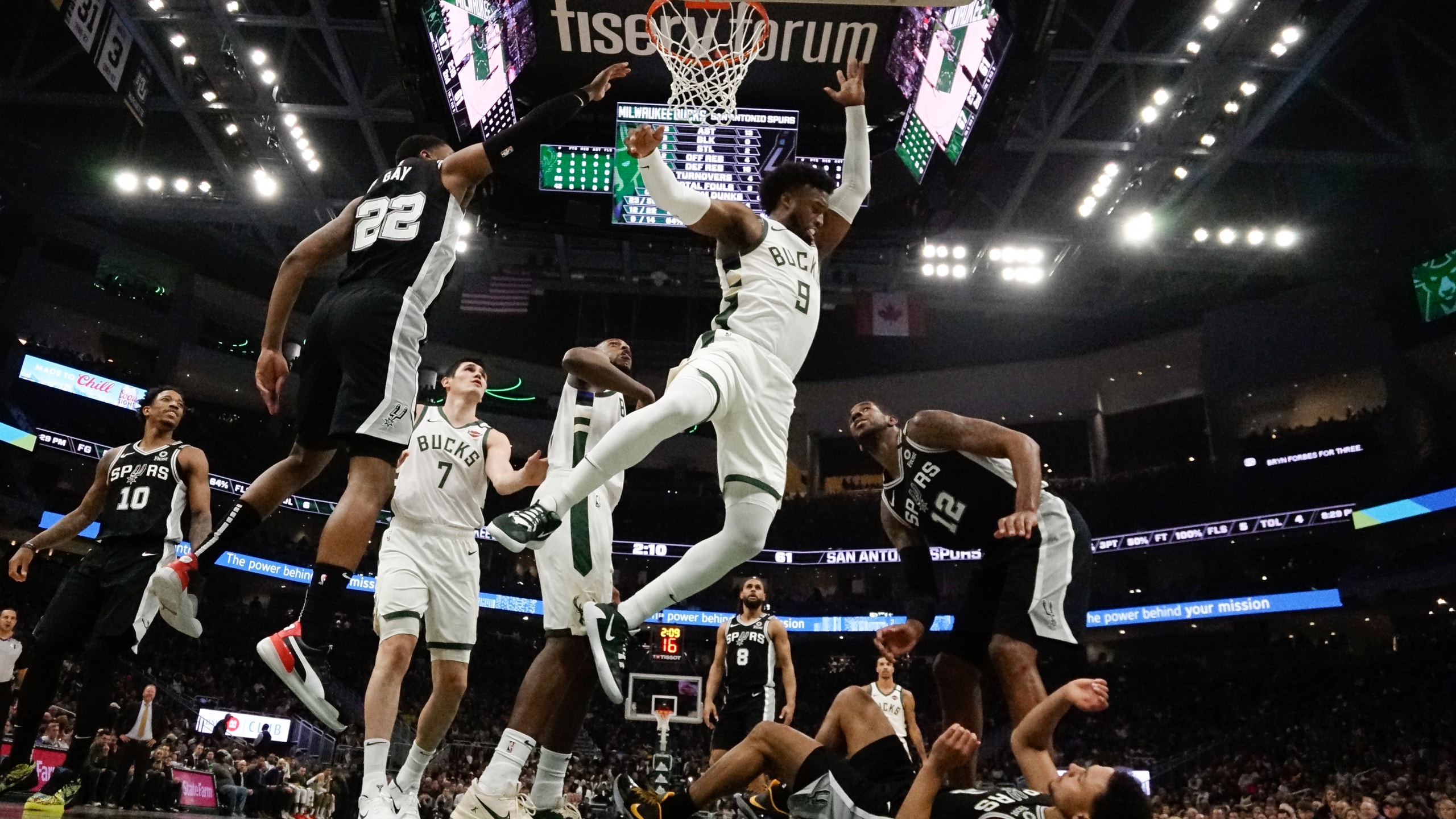 MILWAUKEE (AP) — San Antonio kept Giannis Antetokounmpo under control for one half.

Then the third quarter started.

The Milwaukee star opened it with a layup on an aggressive move to the basket and scored 19 of his game-high 32 points in the quarter, pacing the Bucks to a 127-118 victory over the Spurs on Saturday night.

Antetokounmpo repeatedly was fouled on his drives to the hoop and converted all 12 of his free throw attempts in the second half, including 10 in the third quarter as the Bucks started to pull away. A 60% foul shooter this season entering the game, he finished 15 of 18 at the foul line to set a season-high for free throws made.

All the hard knocks failed to get Antetokounmpo off his game.

“I'm going to trust my technique,” said Antetokounmpo, who had just nine points in the first half. “I saw that whenever I was getting in the paint, they tried to reach and foul and push me and all that. I said, ‘OK, tonight is going to be the night.’ I tried to drive it, go in the paint and just make a play for myself or for my teammate.”

The NBA-leading Milwaukee improved to 32-5, winning their fifth straight since a Christmas Day loss in Philadelphia.

“I thought we did a really good job in the first half, but he (Antetokounmpo) got away from us,” Spurs coach Gregg Popovich said. “It's a hell of a team. Those brothers killed us with the blocks and we were fouling too much.”

San Antonio took a 12-point lead early in the game but trailed at the break, 71-66. LaMarcus Aldridge had all 16 of his points in the first half but was 0 for 7 from the field in 15 second-half minutes.

DeMar DeRozan led the Spurs with 26 points and Rudy Gay had 15 off the bench.

“That’s been our issue all year, having lapses whether it’s the second quarter or the start of the second half,” DeRozan said. “It makes it tough on us to crawl back.

“We’ve got an opportunity to play these guys on our floor Monday. We know what we did wrong and just try to be better.”

Bledsoe was 4 of 6 from 3-point range and Kyle Korver, Middleton and Antetokounmpo each added 3 triples as the Bucks went 17 of 45 (37.8%) from beyond the arc.

The Bucks, who own the NBA's best record, will open a four-game Western swing in San Antonio on Monday, before moving on to play Golden State, Sacramento and Portland.

Spurs: Derrick White moved into the starting lineup in the absence of fourth-year guard Dejounte Murray, who was out due to personal reasons. White has juggled roles, making his 11th start while coming off the bench in 21 other appearances. “I think he’s done it well. It’s a pain in the rear to do that,” Popovich said. White had nine points in 23 minutes. ... Lonnie Walker made his first NBA start, replacing Bryn Forbes in the starting lineup, and finished with eight points on 3-of-12 shooting. … Popovich was asked about Shaquille O’Neal’s comment that he sees himself when he watches Antetokounmpo. “I don’t remember Shaq bringing the ball upcourt,” Popovich said with a wry smile. “Maybe I didn’t pay attention. I don’t know. His force on the game is like Giannis’, that’s for sure. But I think they had a little bit different game.”

Bucks: Second-year guard Donte DiVincenzo sat out due to rest, a decision Budenholzer made with a long-term view. “With the wings and the depth (the Bucks have), it’s just a great opportunity to keep Donte healthy,” Budenholzer said. “He’s playing so good for us. He’s having such a big impact on games and maybe it’s just trying to be aggressive, trying to be ahead of the curve. He probably thinks I’m insane.” DiVincenzo played in only 27 games as a rookie due to a right heel injury but has not had any problems with the foot this season. … Bucks veteran guard George Hill started his NBA career in 2008 with the Spurs and played three seasons under Popovich. “He was always a hard worker; he always had a smile on his face,” Popovich said. “He did whatever we needed to have done on the court.” Hill was traded to Indiana in 2011 in the deal that brought Kawhi Leonard to San Antonio.