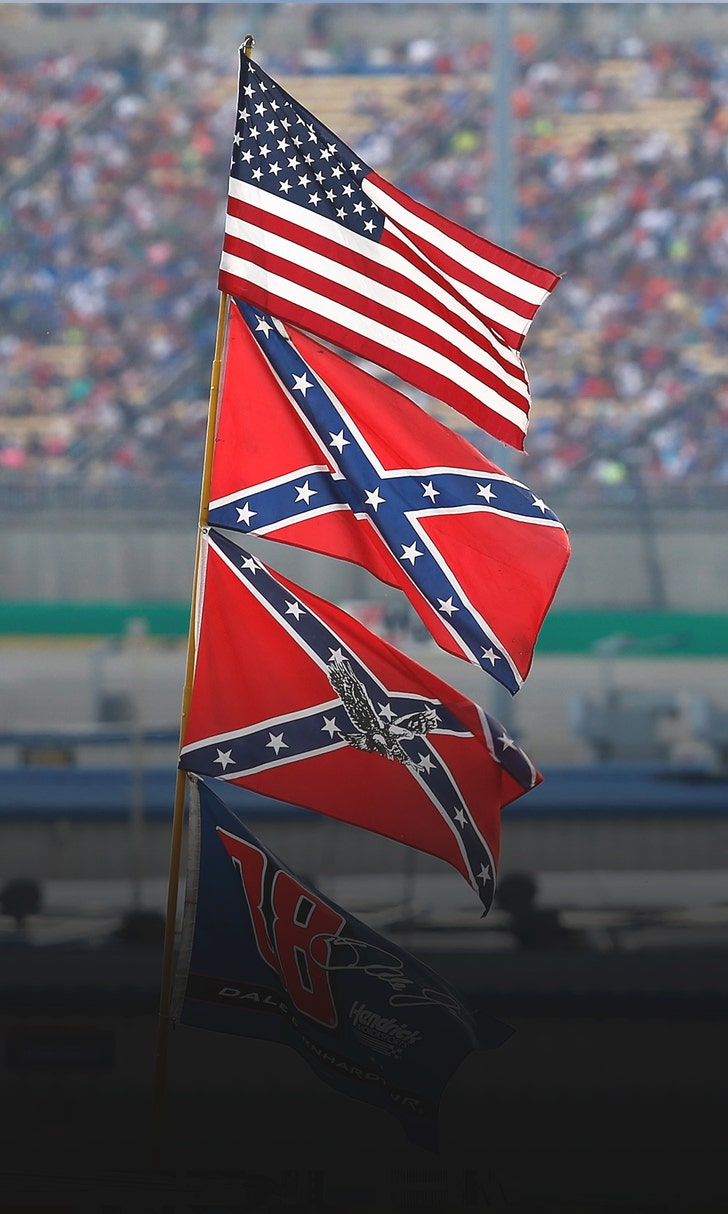 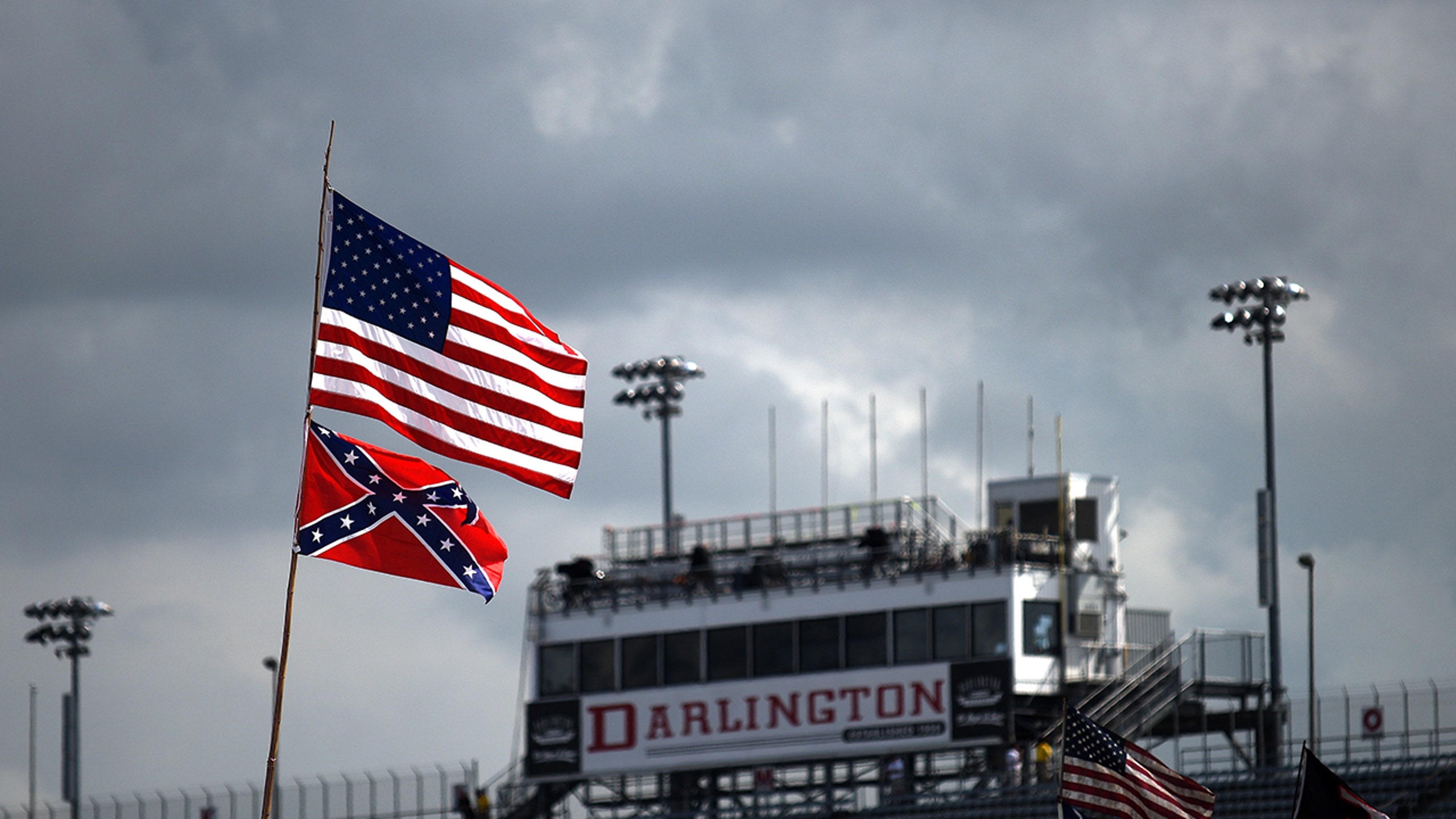 Days after releasing a statement condemning racial inequality in America, NASCAR announced Wednesday that it will take a step toward creating a more inclusive environment at its events by banning the Confederate flag.

The move comes shortly after Bubba Wallace – NASCAR's only full-time black driver – wore an 'I Can't Breathe' t-shirt on Sunday at Atlanta Motor Speedway, in protest of the death of George Floyd, an unarmed black man that died in police custody on May 25 in Minneapolis, Minnesota.

As protests and demonstrations have swept the nation, Wallace made an appearance on CNN on Monday and requested that all Confederate flags be removed from NASCAR events.

"My next step would be to get rid of all Confederate flags ... No one should feel uncomfortable when they come to a NASCAR race. So it starts with Confederate flags. Get them out of here. We have no place for them ... There's gonna be a lot of angry people that carry those flags proudly, but it's time for change. We have to change that."


After the announcement and before Wednesday's race at Martinsville Speedway in Virginia, Wallace reacted to the news that the Confederate flag would no longer be a part at NASCAR events.

"Bravo. Props to NASCAR and everybody involved. This has been a stressful couple of weeks and this is no doubt the biggest race of my career tonight ... I'm excited about tonight. There's a lot of emotions, on the racetrack and off the racetrack ... Today's been special. Again, hats off to NASCAR ... That was a huge, pivotal moment for the sport."


On Wednesday, Wallace will run a special 'Black Lives Matter' edition of his No. 43 car in the Blue-Emu Maximum Pain Relief 500 at Martinsville.

The Confederate flag has remained a controversial symbol in America for decades.

For some individuals, it represents a nod to their Southern roots and to their ancestors who fought in the Civil War. For others – mainly the black community – it represents a time in American history defined by slavery, racism and white supremacy.

NASCAR superstar Denny Hamlin said Tuesday, before the announcement, that he would support NASCAR's decision to remove Confederate flags if it came to that.

"I'm really proud of what our sport did over the last week, with the drivers coming together. Obviously, Bubba was a big part of that initiative. It really opened a lot of eyes ... We continue to have to get better and NASCAR's gonna continue to make changes and look at what flags they wanna fly on the infield ... I'm supportive of whatever they wanna change."


Fellow star driver Martin Truex Jr. said this week that after hearing Wallace speak on the Confederate flag, he was confident NASCAR would consider a change.

"I think it's one of those things that some of us are just ignorant about and don't really think about it or worry about it ... You hear somebody like Bubba talk about it and how he feels about it and it wakes you up a bit. I think NASCAR is going to do the right thing there.''


Once NASCAR made its statement on Wednesday, the social media response was swift and emphatic, with a few other major athletes applauding the change and in the process, becoming newfound fans of Wallace.

After reading NASCAR's statement on the Confederate flag, New Orleans Saints star running back Alvin Kamara wanted to know when the next race would take place.

Wallace had an answer for that, too.

As did the NAACP.

NASCAR's most recent announcement comes on the heels of its decision to allow drivers and team members to peacefully protest during the national anthem.

Previously, crew chiefs were given a handout at the driver/crew chief meeting that included the following at the bottom of the page:
DRIVERS AND CREW CHIEFS, please advise all your Team members: Conduct during the playing of the National Anthem, taken from the US Flag Code. When the flag is displayed – all persons should face and stand at attention with their right hand over their heart – persons should remove their headdress with their right hand and hold it at the left shoulder, the hand being over the heart – when the flag is not displayed – all present should face toward the music and act in the same manner they would if the flag were displayed.
That section has been eliminated. The change in policy comes less than three years after two car owners said they were against protest during the national anthem.


There are still questions on how NASCAR will actually implement the ban.

But as The Athletic's Jeff Gluck writes, the first and most crucial step was putting the ban in place.

Though it was nice for NASCAR to acknowledge the Black Lives Matter movement Sunday in the wake of ongoing protests over the lack of racial equality in the United States, a big question remained: Would there be actions to back up the words? ... NASCAR took its biggest step yet on the side of promoting racial equality, finally banning the Confederate flag on Wednesday after years of discussion and debate.