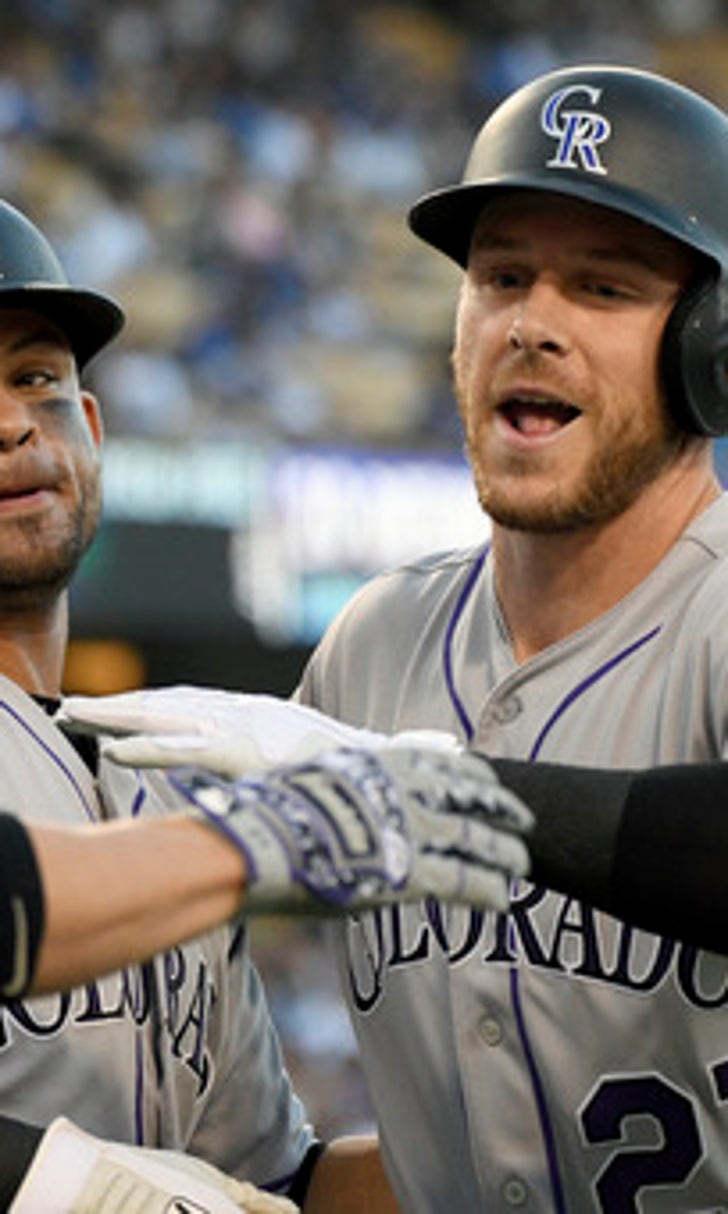 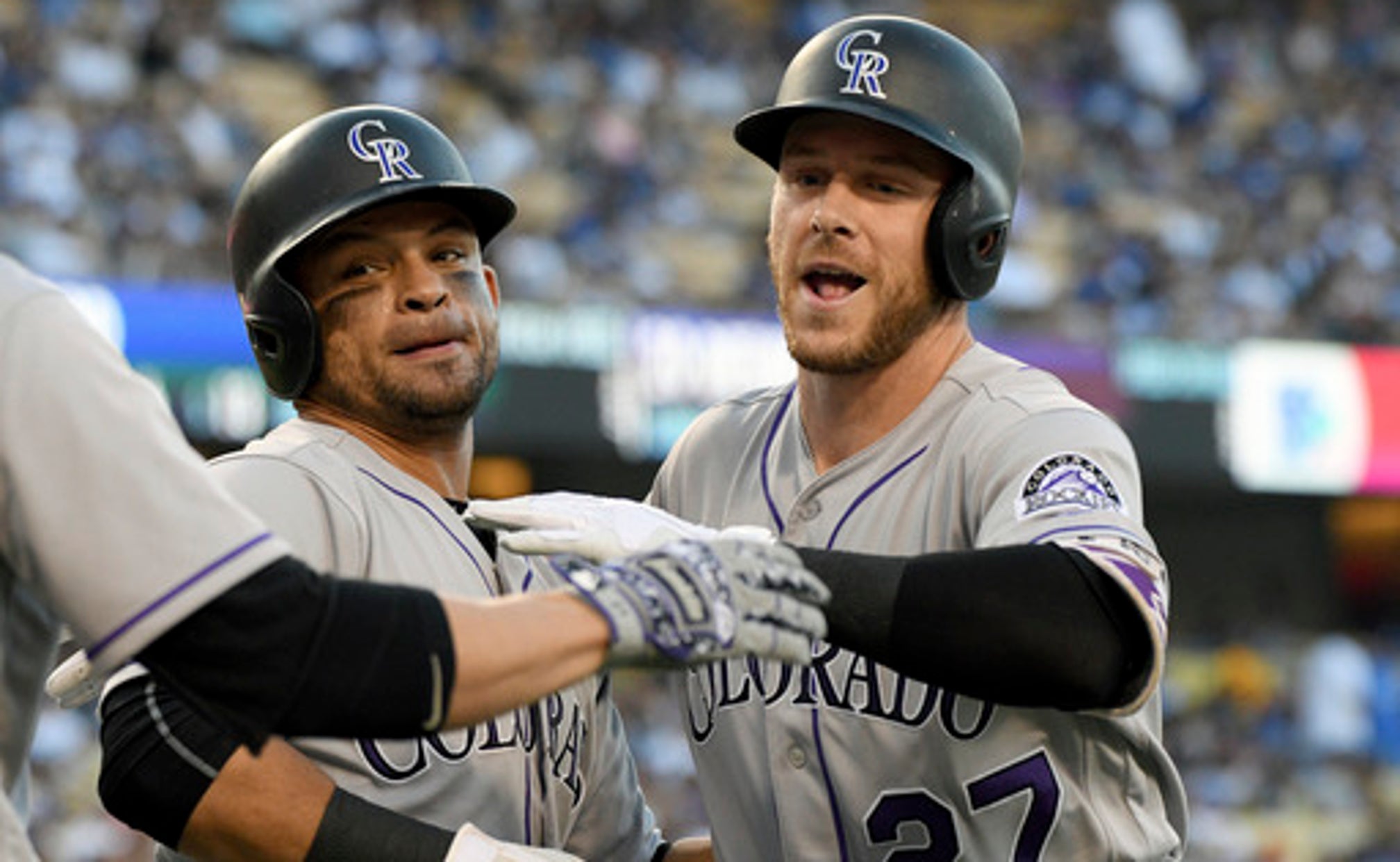 Trevor Story hit a two-run homer and drove in three and the Colorado Rockies beat Los Angeles 6-5 on Saturday night, sending the NL West leaders to their ninth straight defeat in their worst skid since 1992.

Despite its funk, Los Angeles still owns the best record in baseball at 92-50, five games ahead of Washington, which also lost.

''We're making it a little closer than we had anticipated,'' said Roberts, who admitted peeking at the out-of-town scores.

Chad Bettis (1-2) notched his first victory in his sixth start of the season after returning from testicular cancer. The right-hander allowed four runs - three earned - and six hits in five innings. He struck out five with no walks.

''He kept them off-balance and he disrupted their timing, which is what Chad does,'' Rockies manager Bud Black said. ''To get a major league win, to get a `W' by your name this year is really special for Chad and all of us.''

The Dodgers got to 6-5 in the ninth on Forsythe's leadoff homer against Greg Holland, but the Rockies closer retired the next three batters to earn his 39th save.

''We played a pretty solid game,'' Forsythe said. ''Going into that last inning, we still had that fight that we had earlier.''

Dodgers closer Kenley Jansen gave up a leadoff double to Nolan Arenado in the top of the ninth, and Arenado scored on Gerardo Parra's RBI double that popped out of the glove of center fielder Chris Taylor, making it 6-4.

Trailing 4-0 early, the Dodgers closed to 5-4 in the fifth on Andre Ethier's leadoff pinch-hit home run that earned a standing ovation from the sellout crowd of 52,884.

Los Angeles had chances, getting the potential tying run aboard in the sixth and eighth, but couldn't avoid extending its worst losing streak since dropping 10 straight in June 1992.

''When you're going bad like we are, it's the little things that get magnified that you got to really kind of focus on doing those little things to be proactive and get you out of it,'' Roberts said.

''My command wasn't great,'' Wood said. ''Overall, I thought my stuff was there. I got to hopefully lock the command back in. It's time to bear down and hopefully turn this thing around.''

The Dodgers rallied in the fourth, helped by errors from Arenado and Story and a couple of fluke plays.

Justin Turner's single scored leadoff hitter Taylor, who was safe at second on third baseman Arenado's throwing error. Cody Bellinger doubled when the ball nicked the glove of first baseman Mark Reynolds on a diving stab and sailed down the right-field line.

Turner and Bellinger scored on Yasiel Puig's double to make it 4-3. Arenado went to backhand the ball, but it got by him down the left-field line.

Forsythe reached on shortstop Story's error. He tried to backhand the ball on a routine grounder and it missed his glove, putting the potential tying and go-ahead runs on first and third with two outs. Joc Pederson flied out to end the threat.

''I made a bad error,'' Story said. ''Bettis was doing his job, he was getting ground balls. We didn't really pick him up, he picked us up. He got us out of the inning with the lead, kudos to him.''

The Rockies extended their lead to 5-3 on Story's RBI double in the fifth.

Wood gave up five runs and eight hits in five innings, struck out two and walked three in losing his second straight start.

Colorado's DJ LeMahieu had his 16-game hitting streak end when he went 0 for 4 with a walk.

Blackmon went 2 for 5 with a double and a run scored, tying Houston's Craig Biggio (1998) for the most RBIs in a single season by a National League leadoff hitter with 88.

HANGING WITH THE BEST

The Rockies improved to 8-7 against Los Angeles this season and 4-4 at Dodger Stadium.

Rockies: LHP Tyler Anderson tossed a side session Friday that went well. Manager Bud Black said he could be activated as soon as Sunday.

Dodgers: LHP Hyun-Jin Ryu will be skipped in the rotation to get some rest after making 21 starts so far this season.