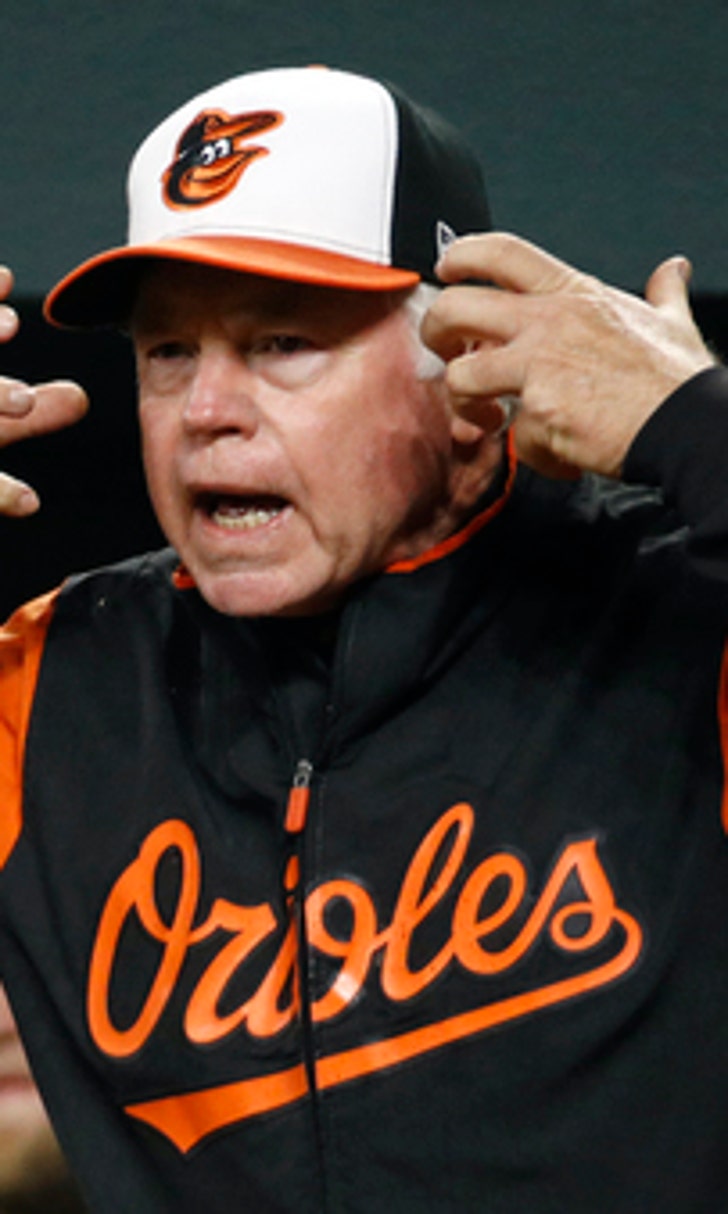 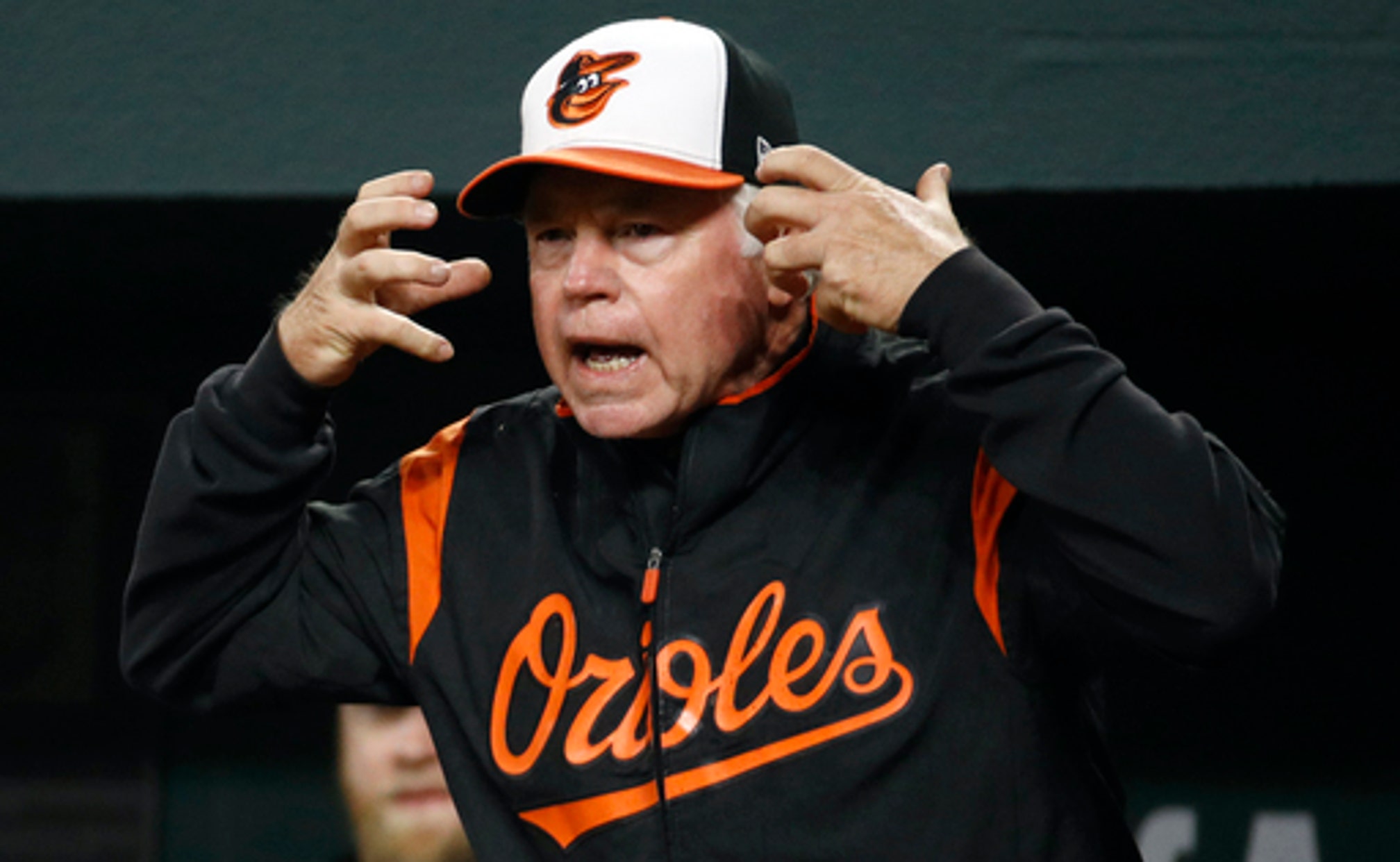 BALTIMORE (AP) The Baltimore Orioles finally put on an offensive show at Camden Yards, one that manager Buck Showalter hopes will be repeated many times this summer.

Limited to seven runs in their first five home games of the season, the Orioles got off to another slow start before finally getting their slumbering offense on track.

Baltimore amassed 11 hits after the third inning, including two by Chris Davis, who entered with a .081 batting average.

''Some better at-bats,'' Showalter said. ''I hope it's kind of coinciding with a little warmer weather.''

Game-time temperature was a far-from-toasty 58 degrees, but that was still warmer than the first games of the series, in which the Orioles totaled two runs and were held hitless until the eighth inning on Tuesday night.

In this one, Baltimore managed only a walk through three innings. In the fourth, however, Manny Machado and Schoop hit successive doubles before Davis ended a 0-for-12 skid with an RBI single and Tim Beckham added a sacrifice fly for a 3-1 lead.

''I thought we did a great job tonight of just hanging in there, getting the runs when we could and not trying to do too much,'' Davis said. ''Hopefully, we can build off of that.''

''I felt like I got better as the game went on,'' the right-hander said. ''My command got better.''

Brad Brach worked the ninth for his third save.

Aledmys Diaz homered for the Blue Jays, who fell to 6-1 this season when scoring first. Toronto was also denied its first three-game road sweep since Aug. 21-23, 2016, against the Los Angeles Angels.

Marco Estrada (1-1) allowed four runs and six hits in four-plus innings. The right-hander was 7-1 in 13 starts against Baltimore, including 3-0 last year.

''The results weren't good, but I thought his stuff was better than that,'' manager John Gibbons said

Estrada had some discomfort in his lower back. However, he said that was not the reason for his struggle.

''As the game went on, I just lost control and wasn't making pitches anymore,'' Estrada said.

After Yangervis Solarte hit a two-out RBI single in the Toronto fifth, Baltimore benefited from its first challenge of the season to make it 4-2 in the bottom half.

With runners on first and second, Machado lifted a fly ball that right fielder Randal Grichuk dived for and missed near the foul line. It was originally ruled a foul ball, but the umpires reversed the call to a single and Schoop followed with an RBI single that ended Estrada's night.

Diaz hit his third homer of the season in the sixth before rookie Chance Sisco singled in a run in the Baltimore half.

Machado went deep in the hole at shortstop to make a backhand grab of a grounder by Justin Smoak before throwing out the runner from short left field.

Keeping in mind that Machado played third base before this season, Showalter said, ''I kept telling everybody that he would make some plays that most shortstops can't make. That was one of them. No one else can generate that type of arm strength from that angle.''

Blue Jays: 1B Kendrys Morales, who went on the 10-day disabled list Tuesday with a strained right hamstring, hit off a tee Wednesday.

Orioles: DH Mark Trumbo (strained right quad) was removed from his rehabilitation assignment after playing just one game with Double-A Bowie on Tuesday night. Trumbo ''just didn't feel like pushing it. He still wasn't comfortable with it,'' Showalter said.

The Orioles optioned top pitching prospect Hunter Harvey to Bowie and recalled INF Engelb Vielma from Triple-A Norfolk. Harvey, the 22nd overall pick in the 2013 draft, spent two days in Baltimore as a potential long reliever but was not needed. Thus, his big league debut will occur at a later date.

Blue Jays: After taking Thursday off, Toronto calls upon Marcus Stroman (0-1, 8.38 ERA) to launch a three-game series in Cleveland.

Orioles: Following Thursday off, Baltimore sends Chris Tillman (0-2, 8.68) to the mound in the opener of a four-game series in Boston.