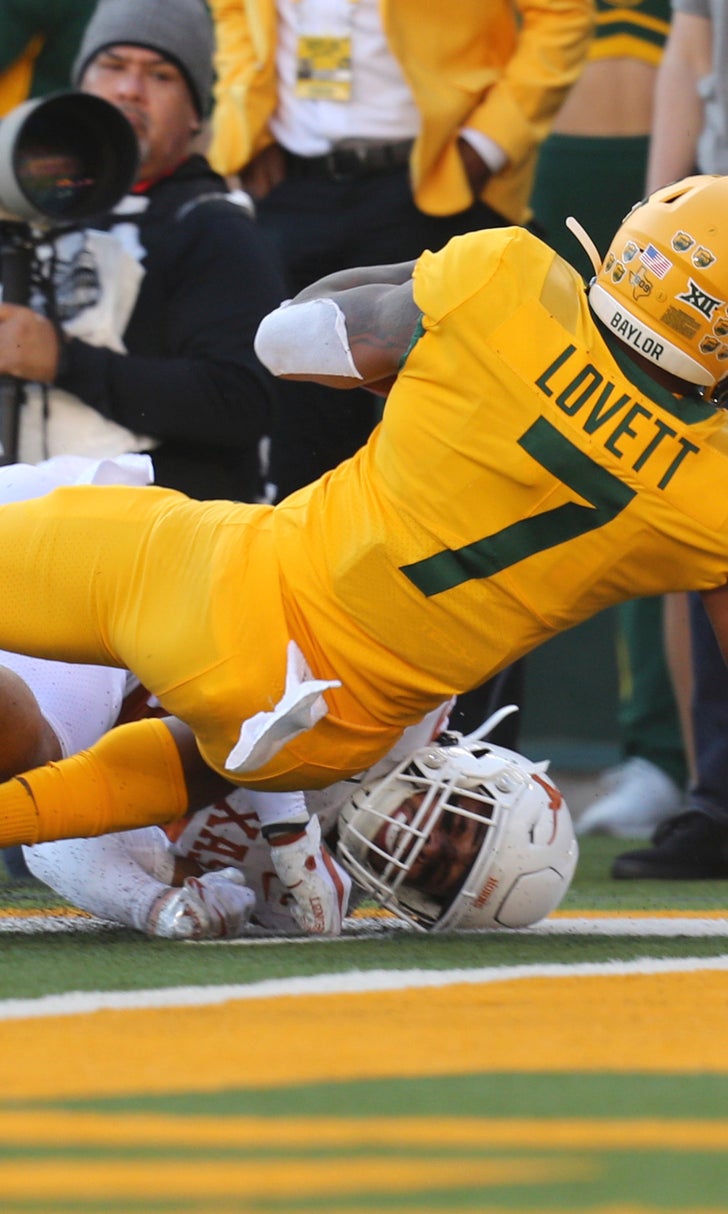 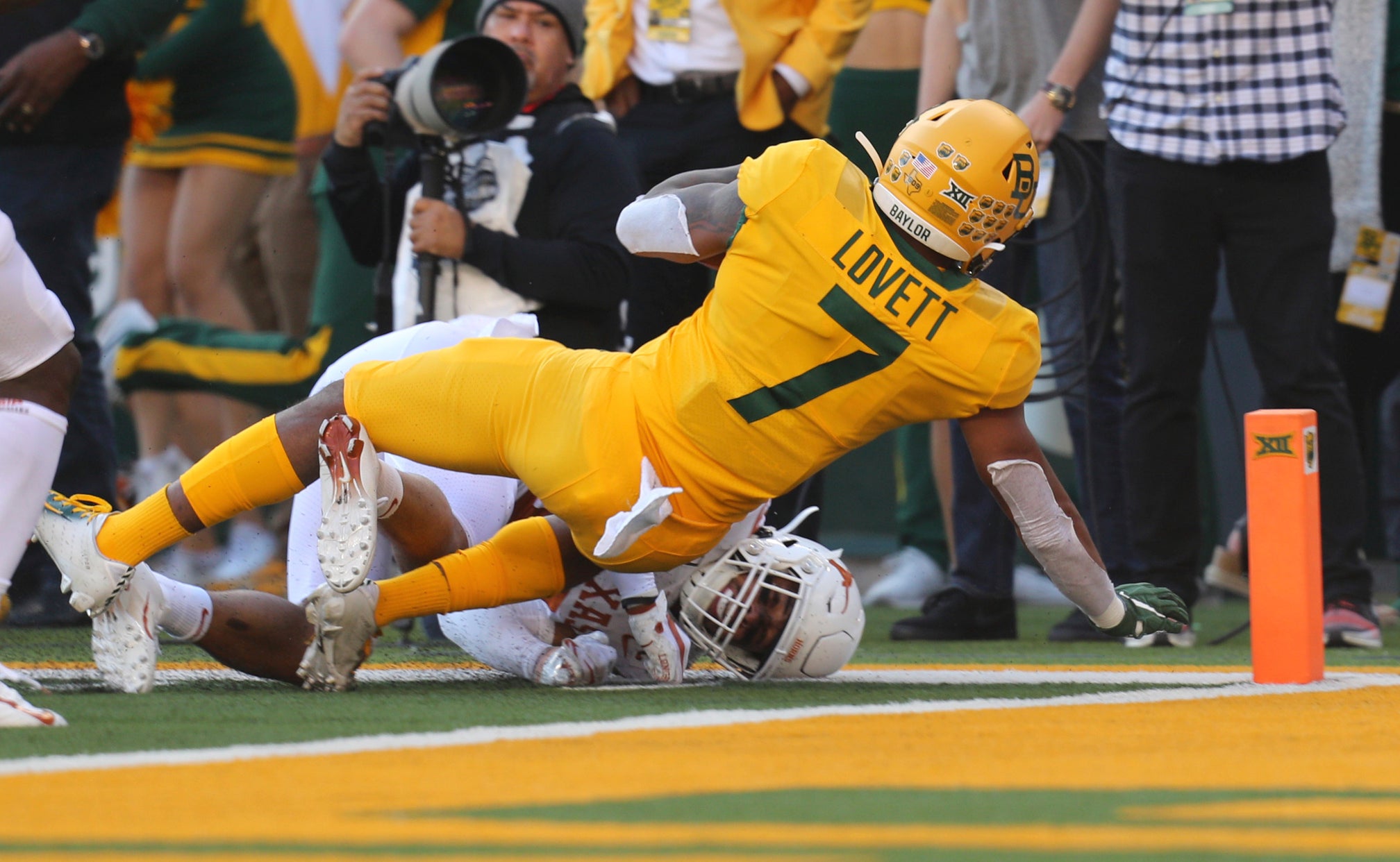 WACO, Texas (AP) — What a different feeling for No. 13 Baylor a week later, and how about the progress the Bears have made in two years.

A week after a disappointing home loss to Oklahoma ended their bid for an undefeated season, and two years after an 11-loss season, Charlie Brewer and the Bears won their home finale 24-10 over Texas on Saturday to clinch a spot in their first Big 12 championship game.

“I’m just really proud of the process of our players,” coach Matt Rhule said. “That’s what my whole message to our players is. ... This didn’t happen tonight. It happened every morning over the last two years, 6 a.m. wakeup calls, 5 a.m. wakeup calls.”

Brewer, the junior quarterback from Austin whose dad and grandfather played for Texas, completed 16 of 25 passes for 221 yards with a touchdown, and ran 18 times for 75 yards and another score. But he left the game for good with 11 1/2 minutes remaining after taking a helmet-to-helmet hit when being tackled at the end of a 5-yard run.

While Rhule said there was “not much of a feel for where he’s at,” the coach noted that there was no reason for Brewer to return and that he was in the locker room celebrating with the team.

Texas (6-5, 4-4) lost for the third time in four games, ending its long-shot bid to get back to the Big 12 title game for the second year in a row.

“They’ve got a special season going. You can tell there’s a lot of chemistry on that team,” Texas coach Tom Herman said of Baylor. “We knew what we were going to be up against.”

On his 1-yard touchdown run in the third quarter, Brewer hopped onto the back of offensive lineman Khalil Keith when crossing the goal line. Brewer later threw a 12-yard TD pass to Denzel Mims to make it 21-3.

Mims had seven catches for 125 yards, all when Brewer was still in the game.

Baylor beat the Longhorns for the first time in its campus stadium on the banks of the Brazos River. The Bears had last beaten Texas at home on bitterly cold December night in 2013, in the last game played at Floyd Casey Stadium after 64 seasons, to clinch their first Big 12 title, when there was no conference championship game.

Two years ago, Baylor lost 38-7 at home to the Longhorns.

“I really don’t want to minimize what it means to beat Texas for us,” Rhule said. “To beat them, I don’t want our guys to let that go by. Two years ago, it wasn’t a pretty game.”

John Lovett’s 28-yard TD run for the first touchdown, cutting downfield behind right tackle Blake Bedier, who knocked two defenders to the ground in a move that blocked several others out of the play. Lovett then bulled over another defender to get into the end zone.

“Saw my lineman grinding for me, they made the hole,” Lovett said. “I just had to finish it. It wouldn't be fair to them if I didn’t finish it.”

Texas QB Sam Ehlinger, who was 22-of-37 passing for 200 yards and was sacked five times, twice escaped trouble with completions to 6-foot-6 freshman receiver Malcolm Epps.

In his own end zone when linebacker Terrel Bernard grabbed onto his shoulders, Ehlinger was able to twist away and stay up, then moved to his right and threw the ball to avoid a safety just before being plowed out of the back of the end zone by big nose tackle Bravvion Roy. Epps made it a 15-yard gain.

After a bad snap early, Ehlinger finally retrieved the ball and was about 20 yards behind the line of scrimmage when he threw to Epps for a 7-yard gain.

Texas: A year after capping a 10-win season with a Sugar Bowl victory, the Longhorns have already lost five games for the eighth time in 10 years — they hadn’t lost more than three games in any of the 10 seasons before that. Texas was held to its fewest points since late 2017, a span of 29 games. The Longhorns called a timeout with 5 seconds left and Daniel Young scored on a 4-yard run on the next play to avoid being held without a touchdown for the first time since 2016.

“We knew how fast and physical that defense was going into the game,” Herman said. “Obviously, we didn’t respond on that side of the football.”

Baylor: A nice bounce-back for the Bears, a week after a 34-31 home loss to four-time defending Big 12 champion Oklahoma, which trailed by 25 points before the biggest comeback in school history.

Texas is at home Friday against Texas Tech, then waits to see where it will play in a bowl game.

Baylor plays its regular-season finale at Kansas, a week before the Big 12 title game.