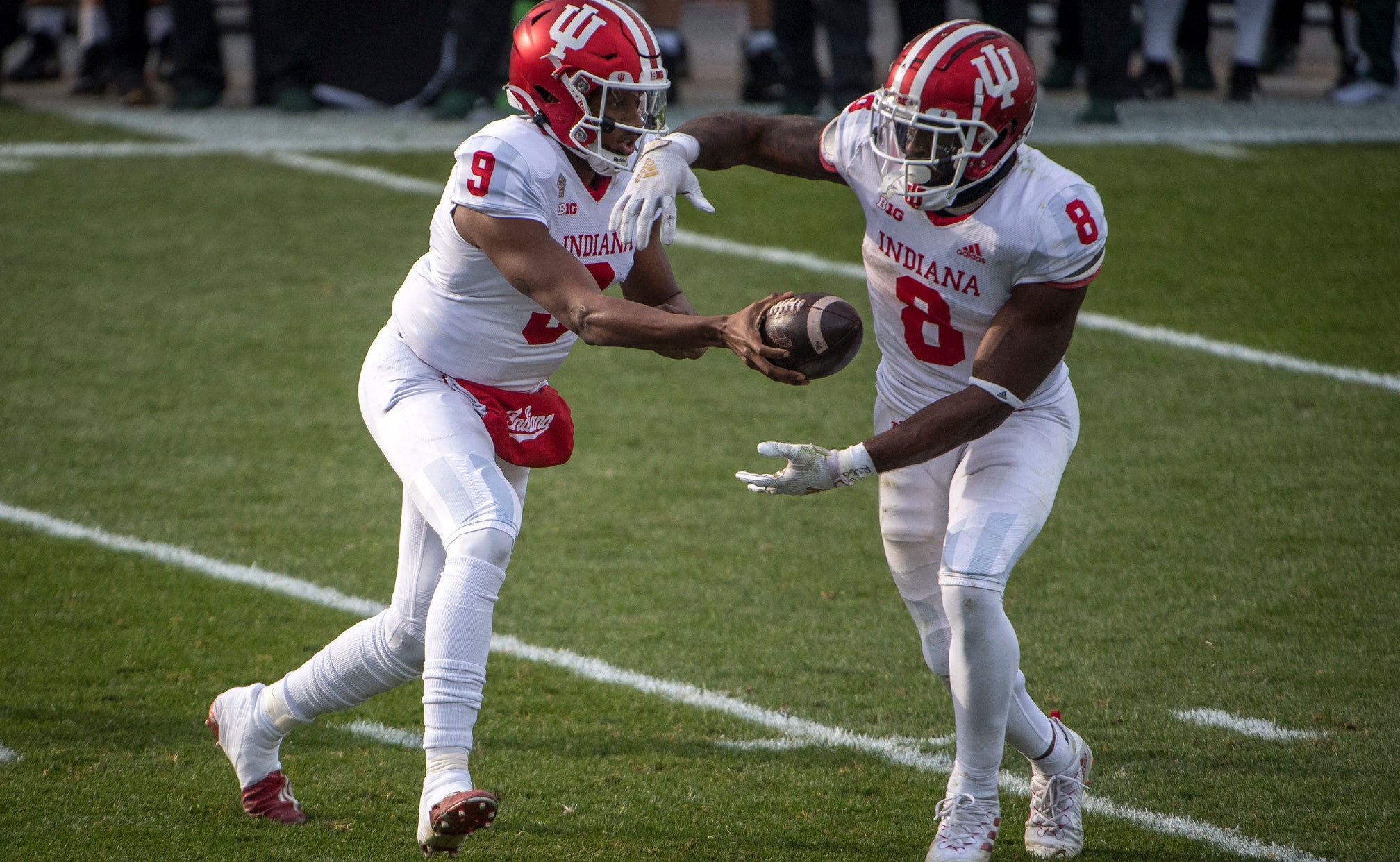 In another college football week marked by postponements and cancellations due to the COVID-19 pandemic, there are still a number of very intriguing matchups slated for this weekend.

The biggest is the showdown of Top 10 teams in Columbus, Ohio, where No. 3 Ohio State hosts surprising No. 9 Indiana in FOX’s “Big Noon Kickoff” on Saturday.

You can get in on the action by playing the College Football Super 6 game. Just forecast the correct results for this week's slate of six games, and you could win the jackpot of $25,000. Download the FOX Bet Super 6 app for free in the Apple Store or Google Play

An unexpected clash for the top spot in the Big Ten comes in Columbus, where the surprising Hoosiers look to end a 24-game losing streak to the Buckeyes dating back to 1990. The teams played to a 27-27 tie in that matchup 30 years ago, and Indiana has not won in the series since a 41-7 rout in 1988.

Martin Penix Jr. has been a breakout performer for the Hoosiers at quarterback, but one of the most important players Saturday for Indiana could be Stevie Scott. The workhorse running back will try to eat clock and keep the Buckeyes' explosive offense on the sidelines. If Indiana can dominate in time of possession, they have a chance to pull the upset as 20.5-point underdogs.

Heisman contender Justin Fields leads the explosive offense for Ohio State, which is averaging more than 46 points per game.

Two teams coming off their first victories of the season try to keep the momentum going in Lincoln, Neb. Illinois downed Rutgers 23-20 in Piscataway, N.J., last weekend, rallying back from 10-point deficits twice. Quarterback Isaiah Williams was huge with his feet, rushing 31 times for 192 yards and a touchdown. Still, the Illinois offense has struggled to post numbers, averaging only 17 points per game.

Meanwhile, Nebraska ran out to a big lead then held on to beat Penn State 30-23. Luke McCaffrey took over at quarterback and scored two TDs (one rushing, one passing) as Nebraska took advantage of two Nittany Lions turnovers.

Quick: Name the leader in the Big XII? It’s not Oklahoma, Oklahoma State or Texas. It’s Iowa State, which is 5-1 in conference play and has a 1,000-yard running back in Breece Hall, who has scored 13 rushing TDs. But the Cyclones live on the edge, averaging 32.9 scoring but allowing 26.7 points per game.

The flip side of the coin is the Wildcats, who are 4-3 and have been forced to sit for two weeks after a 20-18 loss to Oklahoma State. Kansas State has a similar profile: The Wildcats play tight games but haven’t found a way to close the deal.

The Bedlam rivalry has a chance to truly cause chaos in the Big XII. If Oklahoma State wins on Saturday, their path to the conference title game appears to be clear, with no ranked opponents in their final three games.

This will be a clash of styles in Norman, Okla. The Cowboys win with defense and hold opponents to just 17.8 points a game. The Sooners boast a high-flying offense, thanks to quarterback Spencer Rattler, who has thrown for 2,000 yards and 18 TDs. Oklahoma averages 46.1 points a game.

This is the second game of the delayed Pac-12 season for both the Wildcats and Huskies. Arizona lost a heartbreaking 34-30 decision to USC in the final minute last week. The Wildcats feature sophomore quarterback Grant Gunnell, who threw for 286 yards and three TD passes last week.

Meanwhile, Washington running back Sean McGrew rushed for 91 yards and a TD as part of a balanced offensive attack in the Huskies' 27-21 win over Oregon State. Quarterback Dylan Morris will make his second career start for the Huskies, who will lean on preseason All-America cornerback Elijah Molden and a stingy secondary.

This game was a late addition to the Super 6 slate, replacing the Washington State-Stanford game, which was cancelled due to the COVID-19 virus.

This clash will go a long way toward determining which team represents the Big Ten West in the conference title game. The Badgers arrive in Evanston, Ill., fresh off a dominating 49-11 victory at Michigan. Wisconsin's powerful ground game steamrolled for 341 rushing yards on 51 carries. Four Badgers ran for at least 65 yards in Ann Arbor, including Jalen Berger, who had 87 yards on 15 attempts with one TD.

Quarterback Peyton Ramsey leads Northwestern's balanced offensive attack. The Wildcats are allowing just 14.0 points per game, but the Badgers is even stingier, giving up 9.0 points per contest.