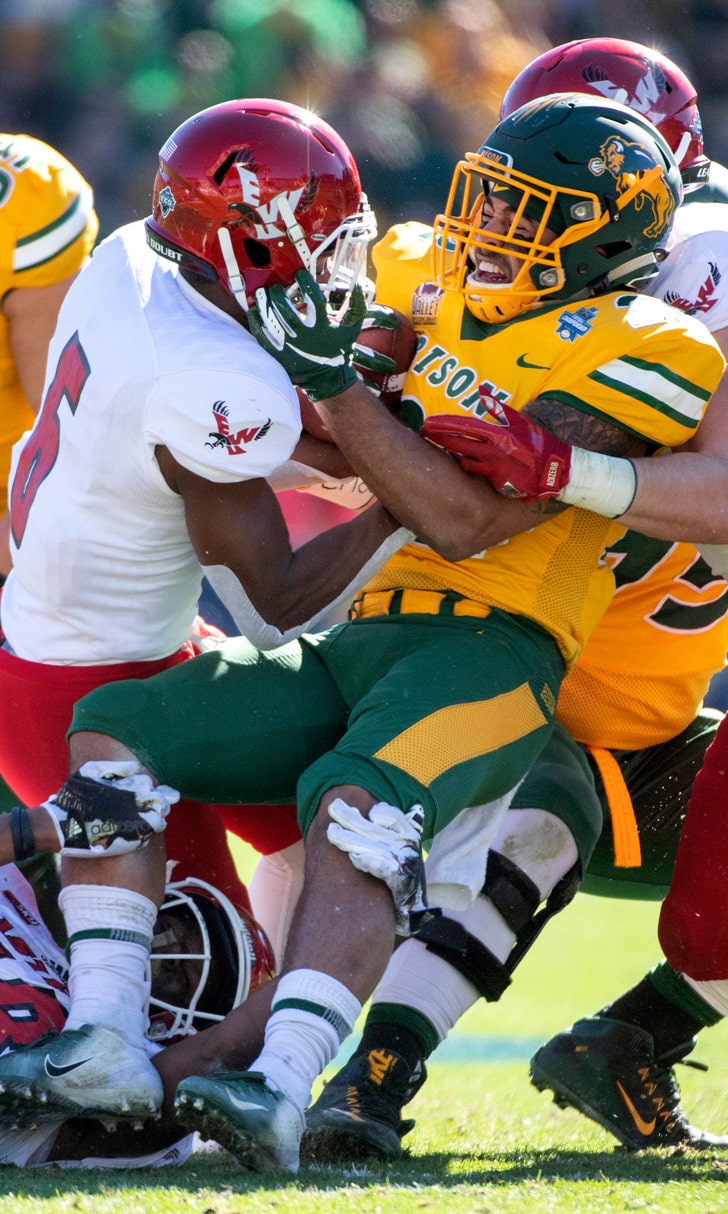 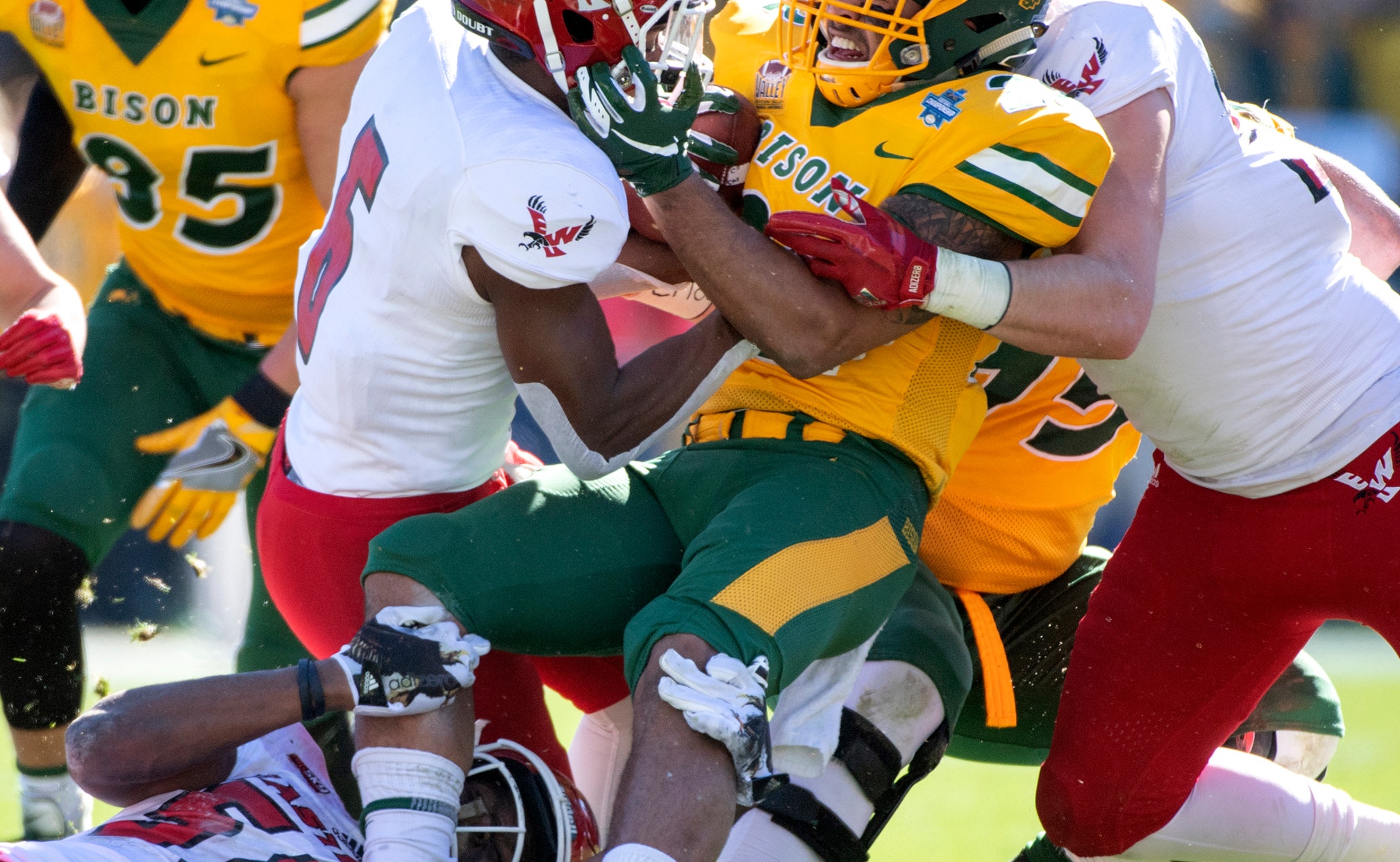 FARGO, N.D. (AP) — The most dominant team in the history of the Football Championship Subdivision has had turnovers in so many places — head coach, assistant coaches, quarterback and nearly 70% of its starting lineup.

It would seem that this year's playoff might be more than the race for second place. Except for the fact that defending champion North Dakota State's depth chart is a work of art.

The Bison, who have won seven of the last eight national championships, the most in FCS history, have been through this before. After winning the program's first three titles under coach Craig Bohl, the 2014 team entered the season having lost virtually its entire staff to Wyoming and 30 players, including quarterback Brock Jensen, to graduation. The Bison went 14-1 and won a fourth straight championship.

That's one reason why coach Brock Spack, who has built a formidable program at Illinois State, said he doesn't see a different outlook to this season.

"In the years I've been here, the names have changed on the back of the jersey, but the player looks the same every time we play North Dakota State," Spack said. "I don't think they're going to go far from their formula. I think they're set up to be very good for a long time."

Colgate coach Dan Hunt, who last year engineered a playoff victory over James Madison, the only other team to win an FCS crown during North Dakota State's run, said he believes the Dukes and South Dakota State have the talent to compete with the Bison.

That opinion comes with a caveat.

"They have a championship mindset and a championship culture," Hunt said of the Bison. "Nothing is guaranteed, but they are going to be the pre-eminent team on our level for some time. It's up to the other programs to try to catch up."

Bison coach Matt Entz, the team's former defensive coordinator, has replaced Chris Klieman, now at Kansas State. Entz responded quickly when asked if he planned any changes: "Nothing major at all."

"There might be a few wrinkles here and there but the things that have made Bison football special over the last 25 years are still here," Entz said. "I don't think the average fan would notice anything different. We're still going to run the football until we can't run it anymore."

Despite losing their top two rushers, Entz said running back is one of the team's deepest positions. Ty Brooks averaged 7.1 yards per run and Adam Cofield 6.9 a year ago. Dimitri Williams, making the transition from wide receiver, is listed as the No. 2 back and redshirt freshman Saybien Clark is in the mix along with true freshmen Jalen Bussey and Kobe Johnson, perhaps the fastest of all backs.

Freshman Trey Lance, who earlier this week was named the starting quarterback, averaged 10.2 yards a pop when he played two games under last year's new rule that allowed freshman to play four games and still keep their redshirts.

"I'm just Trey Lance," he said. "If I can become as good as those guys one day that would be awesome."

The 6-foot-3, 231-pound Lance, a dual threat to run and throw, said he learned a lot from Stick but added that winning the starting job over Iowa State transfer Zeb Noland doesn't mean "I have arrived or anything like that."

The Bison also bring back their quarterback on defense, linebacker Jabril Cox, an NFL draft prospect selected for several preseason honors. Cox led the team last year with 91 total tackles and added four sacks and four interceptions. He said he's confident in the newcomers on the field.

"I think we reloaded pretty well and the young guys are ready for the test," Cox said.

BEST OF THE REST?

The Bison, who open the season Aug. 31 against Butler at Target Field, home of the Minnesota Twins, were picked first in the American Football Coaches Association preseason poll, followed by James Madison, Eastern Washington, South Dakota State and UC Davis.

James Madison and South Dakota State's fortunes could depend on quarterback play. Ben DiNucci of the Dukes threw for 16 touchdowns and ran for a team-high nine scores, but he threw 12 interceptions, including five in the playoff lost to Colgate. Redshirt freshman J'Bore Gibbs of South Dakota State mirrors Lance's size and skillset — along with the lack of experience.

Eastern Washington, which lost to North Dakota State in the title game last season, is led by quarterback Eric Barriere, who took over in the sixth week and piled up 2,450 yards and 24 touchdowns passing and 606 yards and eight touchdowns on the ground.

Ohio State's Championship Conundrum
The Buckeyes could miss the Big Ten title game through no fault of their own. Urban Meyer offers one thing to keep in mind.
7 hours ago