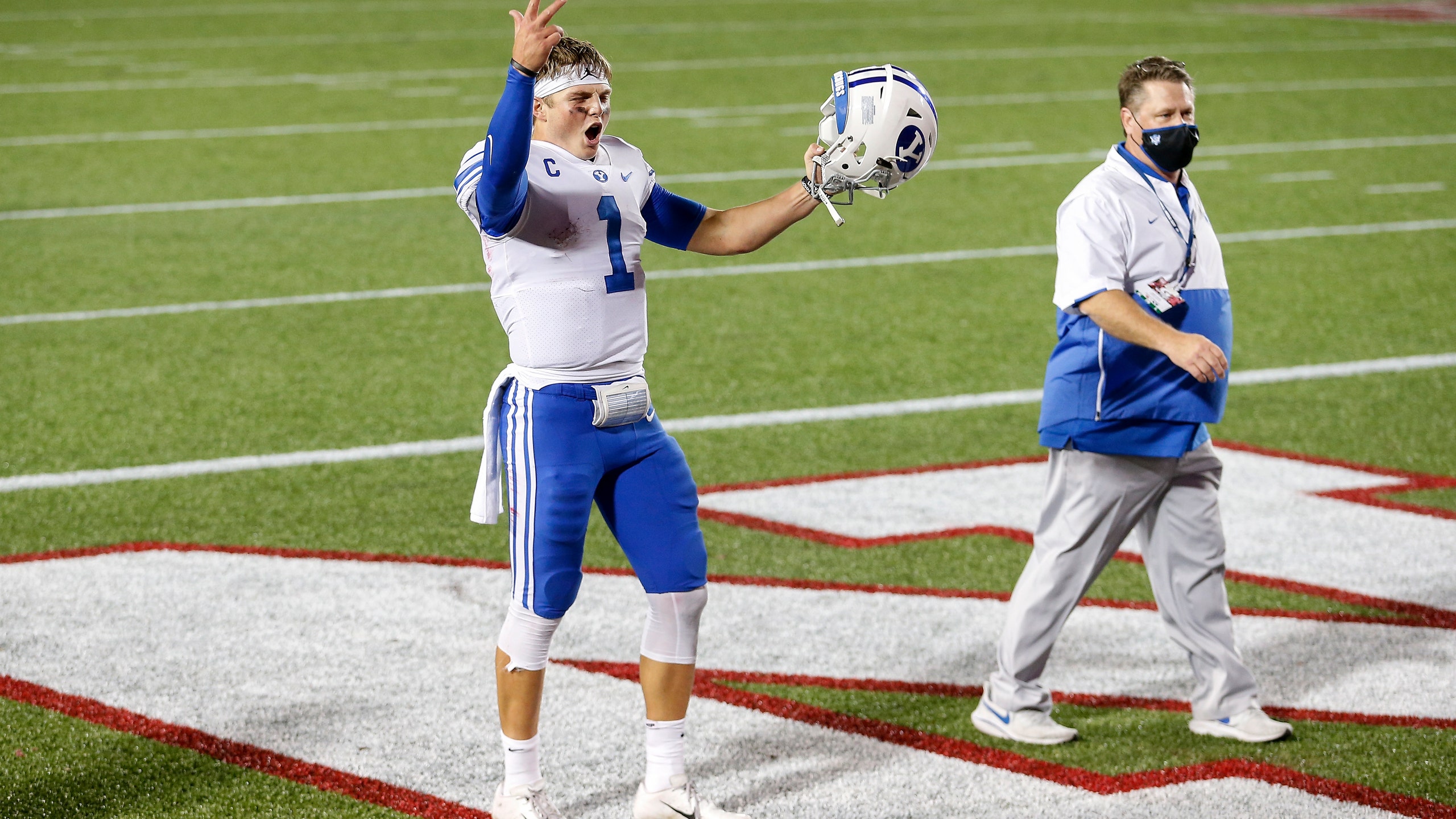 America watched bewildered, if not outright annoyed, by the revelation unbeaten Brigham Young ranked way down at No. 14 in the College Football Playoff rankings release last week.

In fact, during the television broadcast to unveil the initial rankings in this strange pandemic-impacted season, even ESPN’s analysts didn’t quite understand, and David Pollack couldn’t believe it.

“That’s absolutely nuts to me,” Pollack said. “Just watching how dominant they are, not just analytically but physically when you turn on the tape.”

Later in the broadcast, BYU coach Kalani Sitake reacted just minutes after learning his 9-0 team ranked no better than just inside the top 15 teams in the country, according to a bunch of suits in a boardroom at the Gaylord Texan Resort outside of Dallas.

“I just love our boys so much,” he said, “and I just want to see them get the respect they deserve. That is something that drives me.”

But earning the respect you deserve when playing outside of the Power Five — which includes Notre Dame this season, proving the bizarre nature of 2020 — is a matter of great subjectivity. The committee has never ranked a team from the Group of Five among the top four, and it likely never will in a four-team playoff format, unless there are mass casualties to the brand names in the sport.

Proving the rule, Cincinnati achieved the highest ranking ever for a Group of Five program at No. 7. The Bearcats, like the Cougars, are undefeated.

However, as an independent, BYU has a card to play that others do not. They can make and amend their own dance card, mid-song, in the club, and on the fly.

The Cougars’ original schedule featured six Power Five opponents, including three Pac-12 opponents. COVID-19 ruined that schedule as the virus has wrecked almost everything else. So instead of playing at Utah, versus Michigan State, at Arizona State, at Minnesota, versus Missouri and at Stanford as originally planned, BYU had to put together a schedule that looks competitive for a WAC team.

BYU wasn’t helped with restrictions within leagues that would not allow for non-conference opponents, but college football has made known playing without a conference means exactly that. Being in a league comes with protections.

With the reshuffle, the only games from BYU’s original schedule that remained were of the Group of Five variety. And wins against a mediocre Houston (3-3) and an undermanned, if No. 21, Boise State won’t impress many, especially the Playoff selection committee.

“As you look at their schedule, and that’s where the committee went,” selection committee chairman and Iowa athletic director Gary Barta told ESPN, “their win is at Boise State. Boise State was shorthanded in that game. So the committee is very impressed with BYU, but certainly the schedule, compared to teams around them, came into play.”

Victories against North Alabama, Texas State, Western Kentucky and other nontraditional powers — to put it kindly — aren’t going to help BYU earn entry into the top six without carnage in front of the Cougars.

So, when the Pac-12 announced the allowance of non-conference scheduling in late November, BYU looked like it would finally get what it asked for: a real fight with a chance to beat a team the selection committee would respect.

The Origins of a Battle Cry

The University of Southern Mississippi needed a motto. No, Southern Miss needed branding. The Golden Eagles knew what they were up against in college football’s oligarchy.

In the South, where the Southeastern Conference rules, they were a bunch of nobodies from nowhere to most, with the legend of Bear Bryant to their East, the legend of Archie Manning to their North, the legacy of LSU coach Paul Dietzel to the West.

Over 43 years of independency stretching from 1952 to 1995, though, USM proved they could not only swim. Given the chance, the Golden Eagles could fly. Thad Vann put the Golden Eagles on the map in the 1950s with an undefeated season in 1958 en route to a national title. He won another national in 1962.

But USM stood in Hattiesburg, Mississippi, and continued to measure itself against all-comers, in all fights. Because from 1952 to 1995, the Golden Eagles soared around college football as an independent with its motto laid out with every snap: Anyone. Anywhere. Anytime.

In 1987, Brett Favre led USM to a win against mighty Mississippi State on a neutral field in Jackson, Miss. The next year they lost just twice all season and those were to top 10 opponents, No. 10 Florida State and No. 9 Auburn, respectively.

Then, in 1989, the Golden Eagles dropped No. 6 FSU on a (hardly) neutral site in Jacksonville, Fla.

In 1990, they traveled to Birmingham, Ala., for another (hardly) neutral site game against No. 13 Alabama. The Golden Eagles rolled the Tide, too.

A half-century later, Southern Miss enlisted the help of the South’s oldest and one of its most prestigious ad agencies, Godwin Group, to help the school come up with a slogan, a brand, to build its athletic identity around. Godwin Chairman and CEO Danny Mitchell, a USM alumnus, might’ve grinned at the ask because the slogan was staring right back.

To get their money’s worth, the athletic department published a release, stating the official branding of what USM had been doing on a football field for some.

Now the BYU Cougars have taken that slogan, but so far they have refused to live up to it — or have they?

Washington coach Jimmy Lake probably would not have believed it if you told him a year ago, when he was still defensive coordinator at UW, that he’d be sitting in his office five days before a game as Huskies head coach playing eeny, meeny, miny, mo for which team to game plan for.

“There was one point where I had four depth charts across my desk,” Lake told the media last week. That's never happened before.”

After the Apple Cup against Washington State was cancelled, perhaps Lake knew the Huskies would play either BYU or Utah. Still there were details to work out as to which team that would be, due to virus protocols both at the league and state level. Then there is the matter of conference favoritism.

When FOX Sports reporter Bruce Feldman reported last Sunday BYU had turned down the chance to play Washington, the college football world was unmerciful in its criticism. Heisman candidate and BYU quarterback Zach Wilson’s headband screamed that the Cougars wanted a game like the kind dangled in front of them in the form of Lake's Huskies.

Washington has faced BYU in each of the last two seasons, cruising to a 45-19 victory in Provo last fall and a 35-7 rout in Seattle in 2018. So, a win over the Dawgs would go a long way toward showing this BYU team was different.

Then, news dropped that BYU, like many university athletic departments, faced a $20 million budget shortfall for 2020-2021. Wouldn’t BYU like the pay day? Sure, but they also wanted a sure thing. And who could blame the Pac-12 for looking after its own, namely Utah, at the expense of a bless Lord independent.

There’s also nothing that prevented BYU from scheduling the game anyway. In the public’s view, the Cougars would’ve been able to say UW, and the Pac-12 really, were dodging them — not the other way around.

By the rankings show the following Tuesday, though, the noise that BYU had run from the very slogan it pilfered — Anyone. Anywhere. Anytime. — Sitake had had enough. He said they’d game-planned to play Washington. He even claimed his players and coaches lost money in their preparation.

“There’s a narrative out there that we’re ducking or hiding or waiting,” he said, “and that’s just not true. That’s a false narrative.”

Fine. Then prove it. Find a Power Five opponent. Find an undefeated Group of Five foe. Find a team ranked in the Playoff standings and prove you stand for the phrase across Wilson’s headband in all-caps.

You’re outside a room where entry always has been limited to Blue Blood members. Either knock the door down and punch a minted member in the mouth, or suffer the consequences of being ranked exactly where you are.

An undefeated season ain’t gonna mean much if you end up facing a team with a record two games above .500 in the Holiday Bowl. You saw how college football treated undefeated UCF three years ago, and the Golden Knights at least took down a 10-win SEC opponent to end their undefeated season.

I understand being proud of not overspending while maintaining nationally ranked programs is an achievement unto itself. But now is the time prove you want not just to be nationally ranked in football, but that your program is one of the six best in all of college football.

Tell your athletic director to go get a game, BYU. Rise to the legacy Southern Miss’ program was built upon. Maybe then you can match the number of recognized college football national titles won in Hattiesburg at a grand total of two and your first in nearly 40 years.

RJ Young covers college football for Fox Sports. His work has previously appeared in The New York Times, Grantland and OUInsider. You can find more of his work on The RJ Young Show podcast on YouTube. He doesn't like it when his socks get wet.