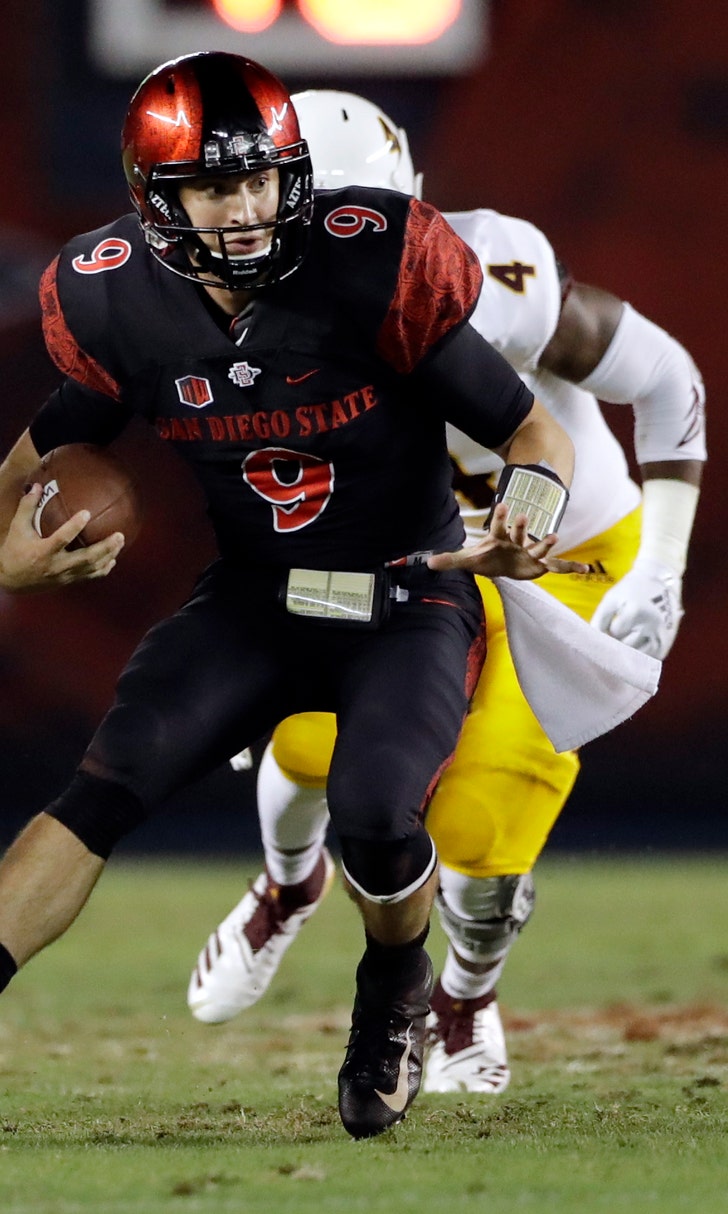 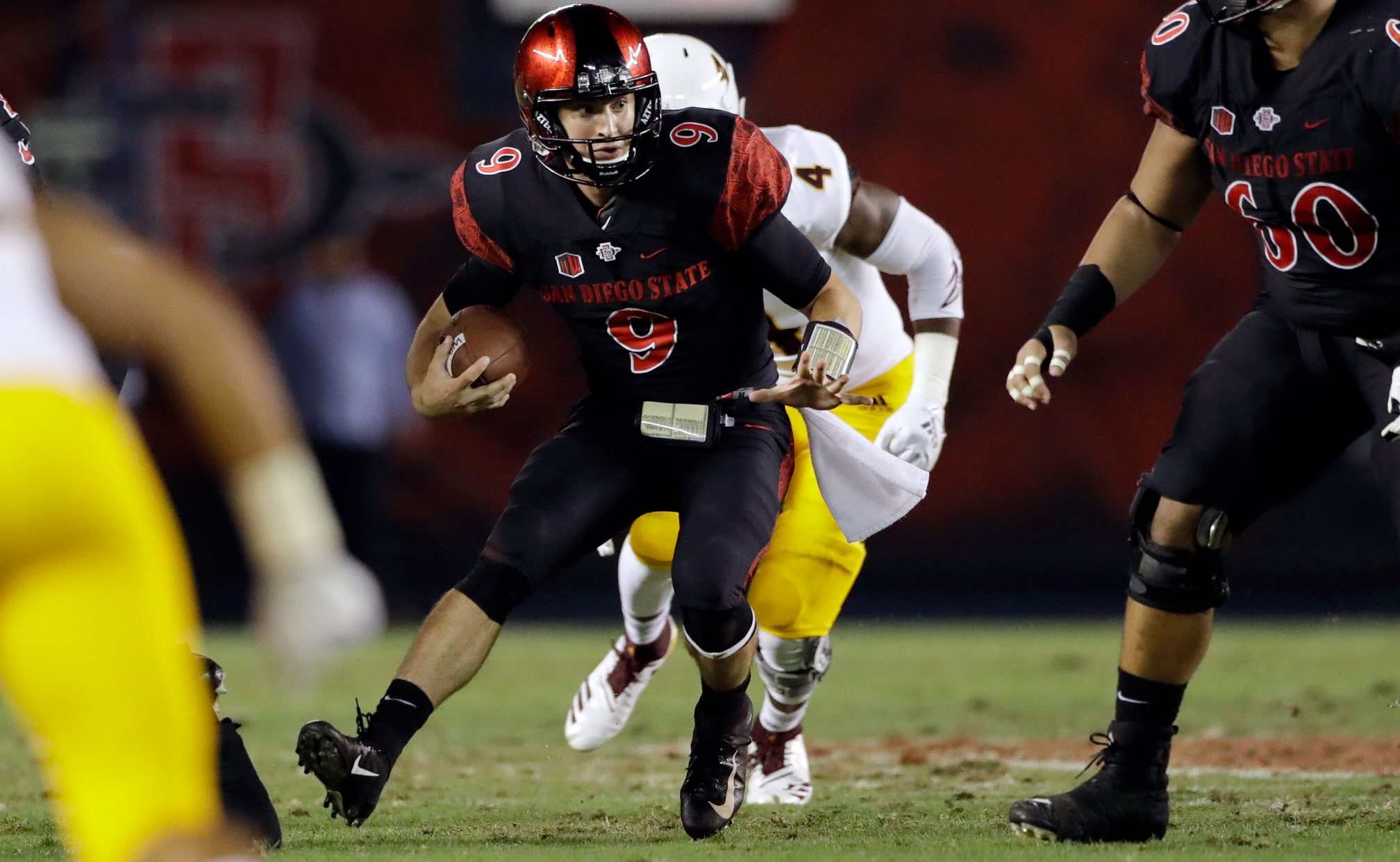 SAN DIEGO (AP) — San Diego State made a statement with another win against Arizona State, even if it took until the final play to seal the 28-21 upset of the No. 23 Sun Devils.

Junior Ryan Agnew threw his first career touchdown pass to cap an impressive drive to tie the game just before halftime, Juwan Washington rushed for 138 yards and one score and San Diego State's defense came up huge as the Aztecs survived a crazy ending Saturday night.

The Aztecs (2-1) beat the Sun Devils (2-1) for the second straight year. This one spoiled the homecoming of new ASU coach Herm Edwards, who played his final college season with the Aztecs in 1976 and then graduated from SDSU with a degree in criminal justice.

ASU's Manny Wilkins appeared to complete a 48-yard pass to Frank Darby to the SDSU 2-yard-line with 6 seconds left, and SDSU's Trenton Thompson was called for targeting. After review, the targeting call was upheld but the referees determined that the pass was incomplete. ASU got the ball at the SDSU 35 for one final play and SDSU batted away the desperation pass in the end zone.

"I love the way we fought back to maybe having a chance to win it," Edwards said. "We just fell a little short. You've got to give San Diego State a lot of credit. They ran the football on us, got to the second level ... 311 yards, it's hard to win a football game with people running like that."

Coach Rocky Long said the Aztecs were "the much better football team in the second half. And to come up two touchdowns ahead at the end and let them — I think our players thought the game was over, too — drive down the field that easily and score, and then fumble the ball to give them the chance to get back in the game, that makes you start to think that there's something out there against you, because we deserved to win the game. We outplayed them. Them even making it that close seems kind of ridiculous."

SDSU, playing without injured defensive tackle Noble Hall, forced ASU into four straight three-and-outs after halftime, and the Sun Devils didn't get their first first down of the second half until 3:41 to go. Wilkins threw a 7-yard touchdown pass to N'Keal Harry with 1:40 to go.

SDSU recovered the ensuing onside kick but Jasmin lost a fumble at the ASU 23 with 43 seconds to go.

John Baron II kicked a career-long 54-yard field goal gave SDSU a 17-14 lead midway through the third quarter. He added a 36-yarder early in the fourth quarter. Jasmin scored on a 3-yard run with 4:14 left. Agnew, making his first career start, in place of injured senior Christian Chapman, completed a conversion pass to Kahale Warring for a 28-14 lead.

Agnew capped a two-minute drill with a 9-yard touchdown pass to sophomore wide receiver Tim Wilson with 8 seconds left in the first half for a 14-14 tie. It was the first career TD throw for Agnew and the first career scoring catch for Wilson.

Agnew accounted for all 85 yards on the 11-play drive, completing 6 of 9 passes for 77 yards and running once for 8 yards. SDSU ran the final four plays after using its final timeout, with Agnew completing passes of 12, 15, 15 and 9 yards.

The drive was set up when Wilkins was sacked for a 4-yard loss on fourth-and-1 from the SDSU 11 with 1:41 left.

Agnew became the first quarterback from a non-power five school to beat a ranked team from a power five school in his first start since USF's B.J. Daniels did it against No. 18 Florida State on Sept. 26, 2009.

Agnew replaced Chapman, who's out three to six weeks after suffering a knee injury in a victory against Sacramento State a week earlier.

Wilkins threw a 12-yard touchdown pass to Brandon Aiyuk and ran for 1-yard score in the first half. Both scores were set up by long passes.

Washington scored on a 13-yard run as the teams traded scores in the first half.

Arizona State likely will drop out of the Top 25. It was coming off a home upset of then-No. 15 Michigan State.

Arizona State: The Sun Devils came in with the nation's No. 1 rushing defense, allowing only 1.1 yards per carry, and failed to stop Washington.

San Diego State: Coach Rocky Long didn't think Agnew would get flustered, and he was right. He showed a nice ability to scramble and will get the chance to show more of himself in the coming weeks.

Oregon: The Aztecs play their final non-conference game when they host Eastern Michigan next Saturday.