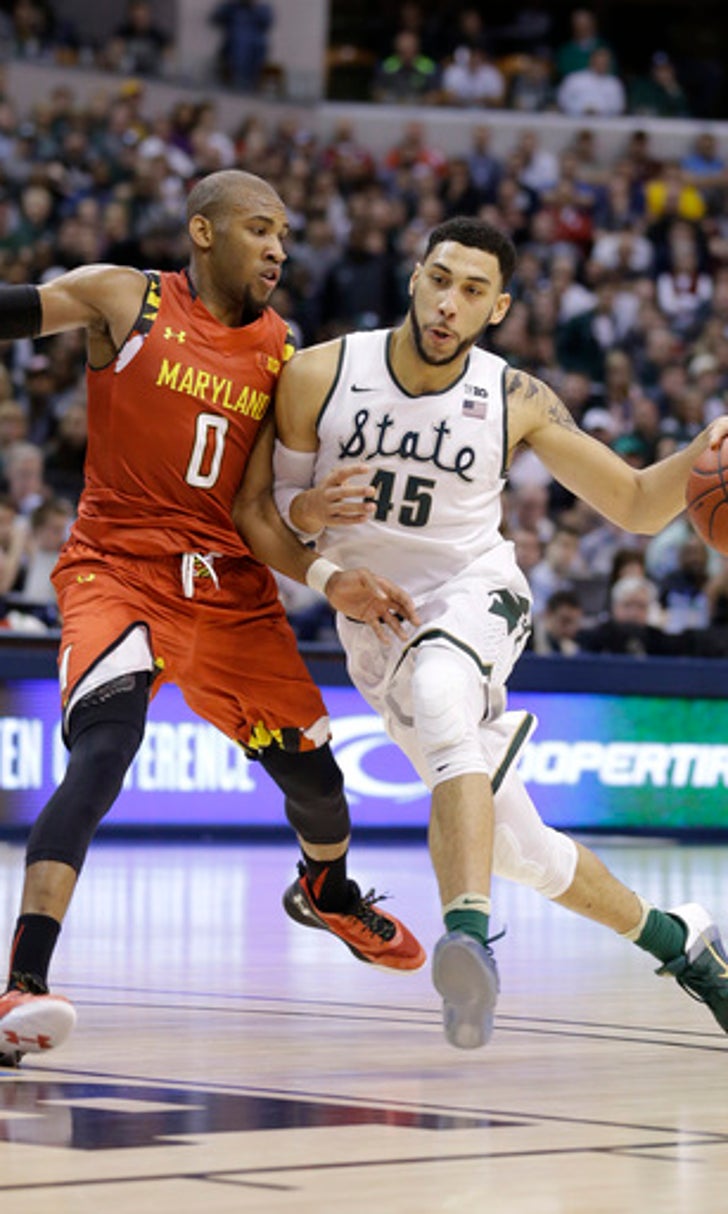 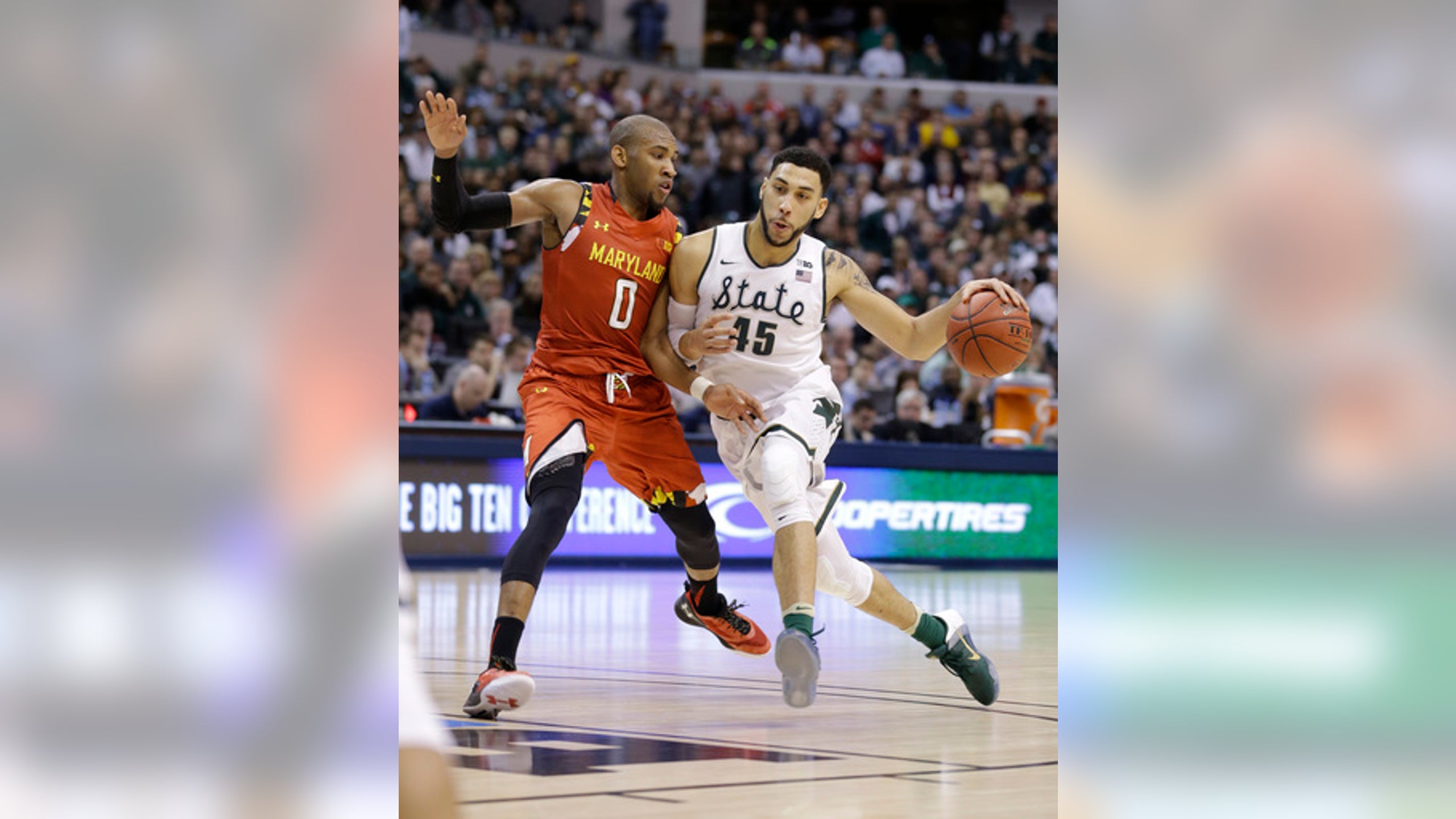 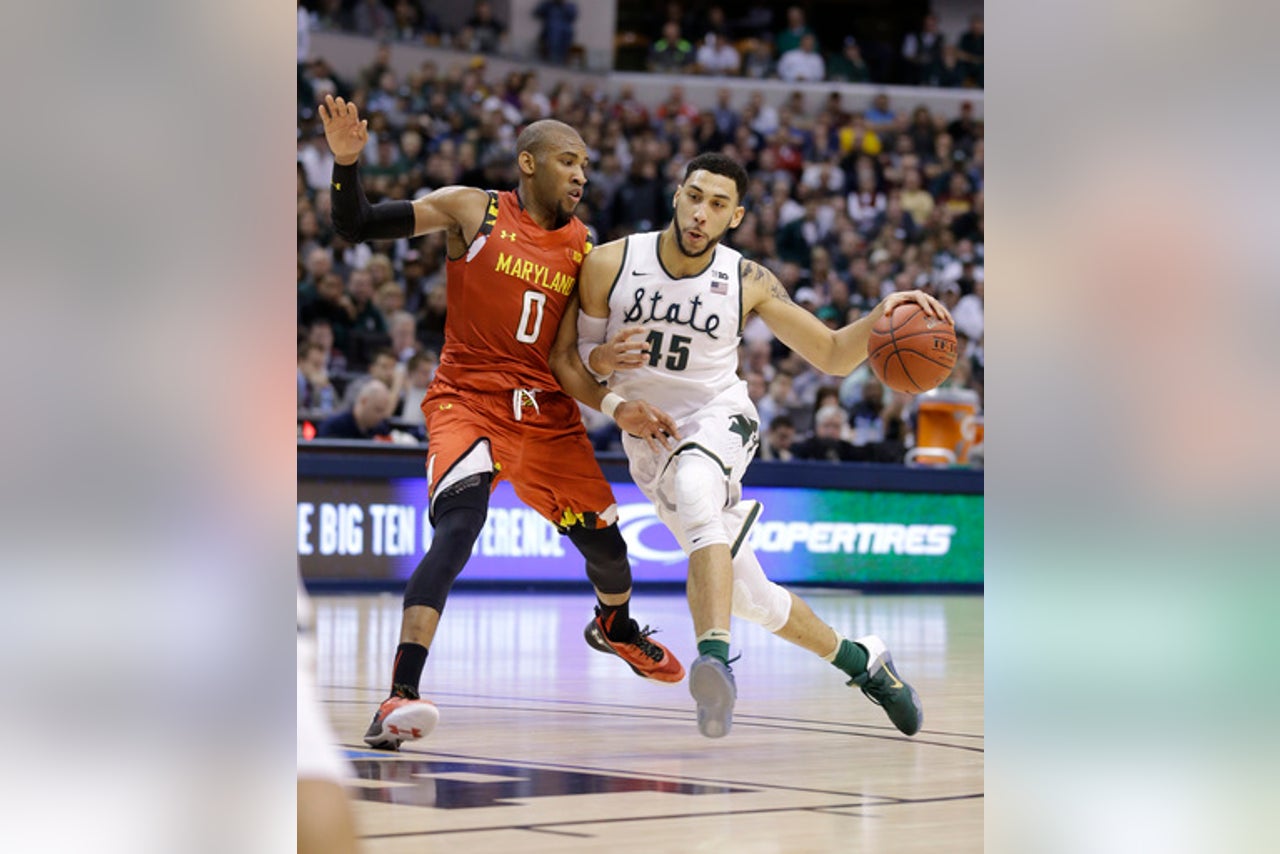 Even when he's cleaning up his own mistakes.

After missing the front end of a one-and-one with 10.2 seconds to play, Valentine grabbed a defensive rebound, drew a foul and made two free throws with 0.8 seconds left to seal a 64-61 victory over No. 18 Maryland in Saturday's Big Ten tournament semifinal.

Melo Trimble's desperation heave from 55 feet barely got out of his hands and didn't come until after the buzzer anyway.

"That was a weird game for Denzel Valentine and all he did was 18 (points), 10 (assists) and seven (rebounds)," coach Tom Izzo said. "I guess I'm getting like fans, spoiled."

Valentine came up just short, for the second straight day, of becoming the first player in tourney history with a triple-double. And he's got one more chance in Sunday's title game against No. 13 Purdue.

After explaining Friday that the Spartans (28-5) were angry about finishing second in the regular season, Valentine has them playing like champs. They've won 12 out of 13 as they chase a record-tying fifth tourney title.

What's more impressive is how the Spartans are winning.

One day after Maryland (25-8) scored a tourney-record 97 points, Michigan State held the Terrapins 15 points below their season average and allowed only two baskets over the last 10 1/2 minutes — Trimble's 3 with 10:25 left that tied the score at 53 and his layup with 14.7 seconds left, which made it 62-61.

Over the final 35 1/2 minutes, Michigan State trailed for a total of 19 seconds.

Valentine and his teammates dug deep.

"We made stops, got rebounds when we needed to and guys made free throws down the stretch," Valentine said.

Michigan State had no choice in this rough-and-tumble game.

Maryland's Jake Layman got hit in the face on the first basket. No foul was called.

A couple of possessions later, Layman and Eron Harris each picked up technicals as Rasheed Sulaimon and Valentine had words near midcourt. A few minutes later, Terrapins coach Mark Turgeon was given a bench warning.

Less than 12 minutes into the game, Trimble got hit in the face with the ball on a Michigan State pass, forcing him to briefly leave. And then, with 4:15 left in the first half, Turgeon was called for a technical.

Even at the end, Trimble thought he got fouled twice — on what would have been the go-ahead layup in the final seconds and again on the heave.

"I was very surprised because he clearly bumped into me and I tried to force one up," Trimble said after scoring 11 points. "We didn't get the call, but, you know, it happens."

None of it bothered the Spartans.

After taking an 11-10 lead, they didn't allow Maryland to tie the score until Trimble's 3 and didn't give up the lead until Robert Carter Jr. made two free throws with 6:55 left.

Deyonta Davis answered with a dunk on the next possession to give Michigan State a 58-57 lead and the Spartans never trailed again.

Carter led the Terrapins with 18 points and eight rebounds.

Michigan State has made a pretty strong case for a No. 1 seed this week. After blowing out Ohio State by 27, they beat Maryland for the second time this year. So what more could the selection committee want from the Big Ten's regular-season runners-up? Perhaps a tourney title.

Trimble was off Saturday. In addition to getting hit in the face and missing a go-ahead layup at the end, he missed his first nine shots. Trimble was 2 of 15 from the field, 1 of 7 from beyond the arc, with three rebounds, two assists and one steal.

Michigan State made 14 of 15 free-throw attempts Saturday. But only two players attempted free throws. Matt Costello made all six. Valentine, who shoots 84.9 percent from the line, was 8 of 9.

Maryland: Has lost three straight to Michigan State. ... Layman finished with nine points and moved into the top 20 on Maryland's career scoring list. ... Carter needs 10 points become the fourth player on his team to join the 1,000-point club.

Michigan State: Has won four of its past five semifinal games in the Big Ten Tourney. ... The Spartans made eight 3s on Saturday, giving them (302) this season. They need six to break the school record (307), set two years ago.