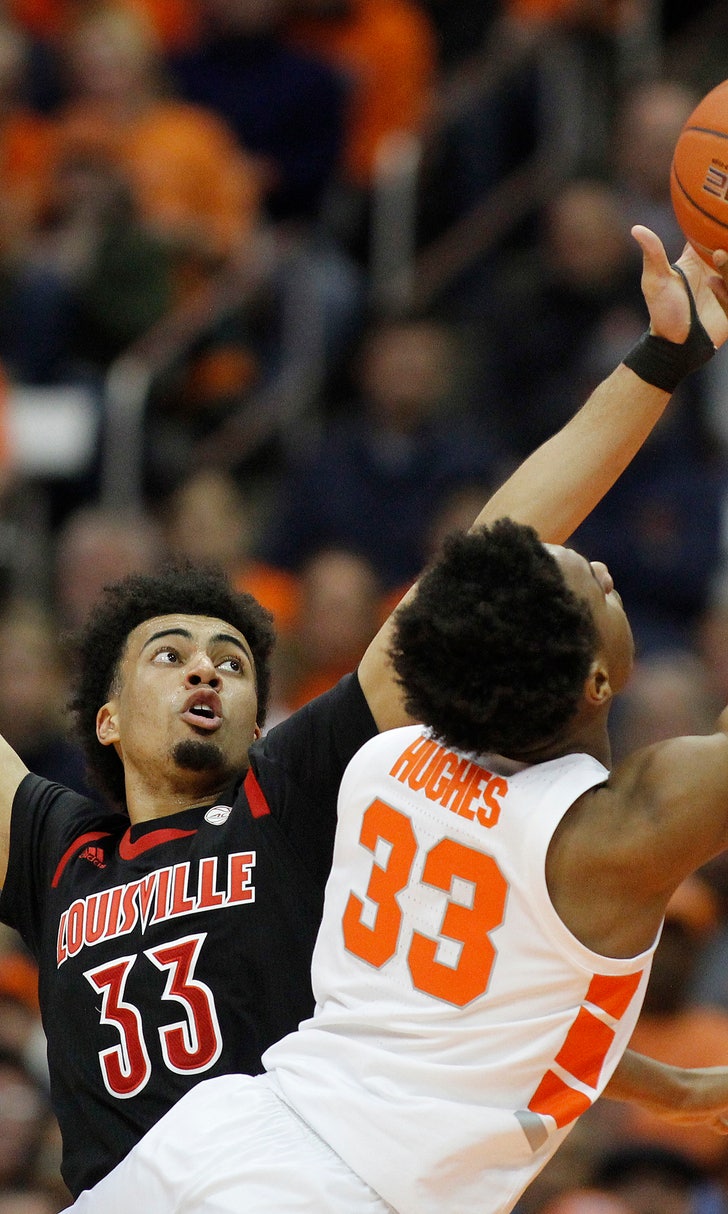 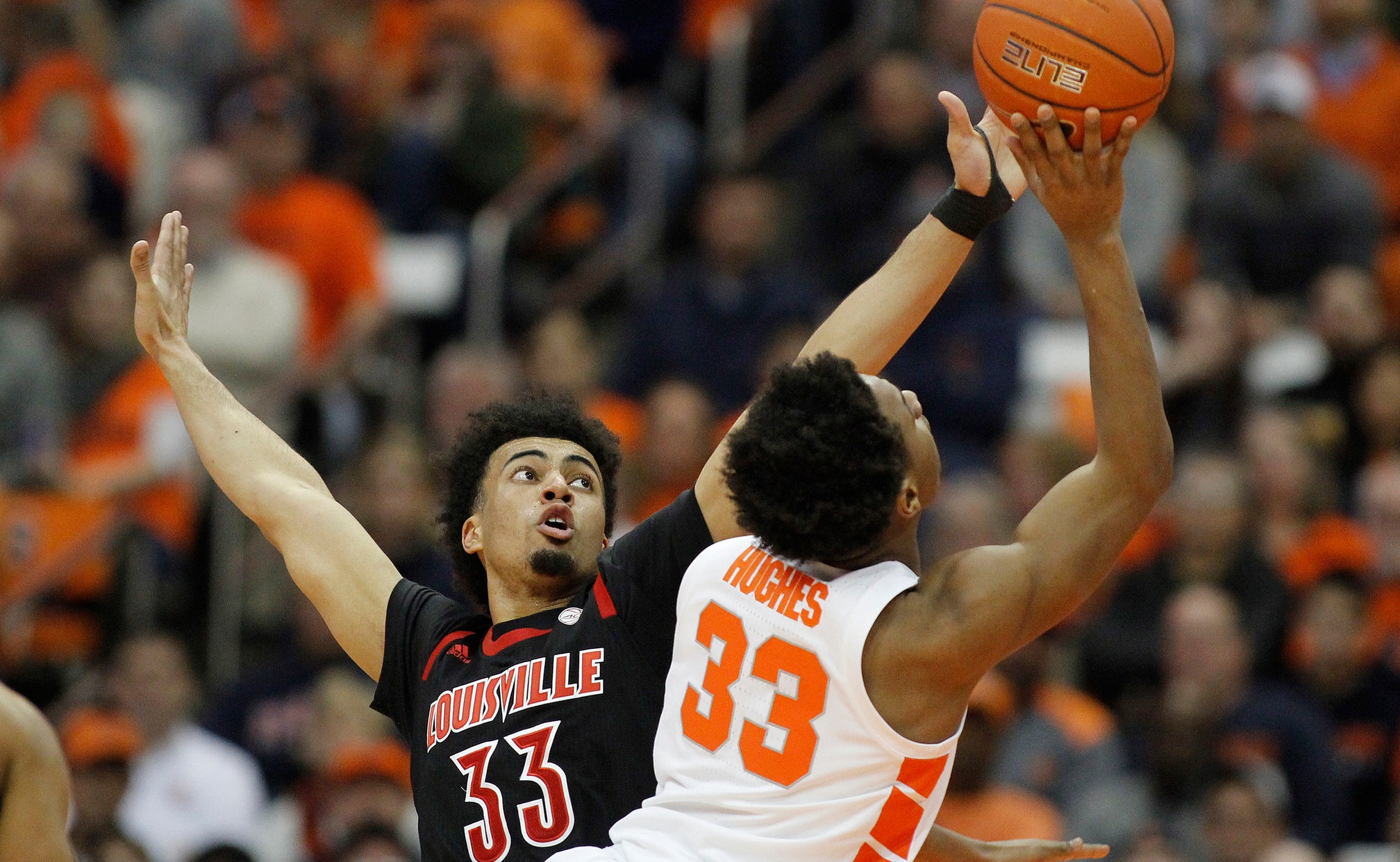 Elijah Hughes scored 18 points and Oshae Brissett had 16 to lead four players in double figures as the Orange beat the 18th-ranked Cardinals 69-49 on Wednesday night.

The Orange, who had lost two of three, got back on track after being off for a week, and their third win this season over a ranked team was paced by their 2-3 zone defense.

"Louisville has been a really good road team... they've been very, very good on the road, so a good win," Syracuse coach Jim Boeheim said. "I thought the week off helped us. I thought we were able to do some things practice-wise that helped us."

Syracuse (18-8, 9-4 Atlantic Coast Conference) had suffered a 73-58 loss at North Carolina State in their last game, shooting just 35 percent, a weakness the Orange had displayed in all four of their conference losses. They weren't much better in this one (22 of 57 for 38.6 percent) but hit 11 3-pointers and held the Cardinals in check throughout.

"Give Syracuse credit. Their length really bothered our guys," Louisville coach Chris Mack said. "Early on, when we got the ball into the logo and a few areas we were trying to get to, we just didn't convert. Even our offensive rebounds we had trouble converting."

And all the misses had an uncharacteristic effect at the other end — a lack of defensive effort.

"We try to pride ourself on defense," said guard Khwan Fore, who had eight points. "We miss our first couple of shots and ended up letting them get in the lane and drive the ball. I think that's where it all started."

The Cardinals (18-9, 9-5 Atlantic Coast Conference) were coming off two tough games. They blew a 23-point second-half lead and lost to top-ranked Duke just over a week ago, and on Saturday barely eked out a 56-55 win over Clemson. Louisville led the Tigers by seven points with 17 seconds remaining and Clemson had two chances in the final seconds to walk off the court with a win.

The slump continued against the Orange.

Jordan Nwora had 11 points on 3-of-13 shooting to lead Louisville, Dwayne Sutton was 1 of 10 for five points and Christen Cunningham missed all six shots he attempted, finishing with four points on free throws and with three assists and three turnovers.

Buddy Boeheim had 14 points and Tyus Battle 11 for Syracuse.

Syracuse led 35-23 at the break and the sluggish Cardinals couldn't get untracked. After Cunningham missed a 3 from the top of the key and Nwora followed with an air ball, Battle converted a steal and dunk, then fed Hughes for an open 3 on the wing. Less than two minutes later, Hughes hit his fourth 3-pointer of the game to boost the Orange lead to 47-28 with 12:05 left.

"It's gonna give me a lot of confidence going to the next one and I'm just gonna try to keep it going," said Hughes, who scored just 13 points combined in the previous two games.

Syracuse's 2-3 zone was purring in the first half, too, and the Orange led by as many as 16 after both teams struggled at the start. The Cardinals averted falling further behind by hitting 10 of 12 free throws.

In the opening nine minutes, the teams combined to shoot 4 of 18 from the floor, 2 of 10 from beyond the arc, and each had four turnovers. The Orange held the Cardinals without a basket for 7:20 and put together a 15-3 run to gain a double-digit lead. Boeheim hit a 3 and a runner, Hughes converted a pull-up 3 in transition, and Brissett's left-handed layup gave Syracuse a 26-13 lead with 4:03 left in the first half. A dunk by Steven Enoch with 3:48 left broke the drought for the Cardinals, who trailed 35-23 at halftime after shooting just 1 of 13 from long range and 6 of 26 (23.1 percent) overall. They entered the game shooting 37.3 percent from 3-point range in league play.

The Cardinals will drop again in the next Top 25.

"I think it's just a slump. All teams have that," Fore said. "We've just got to keep working, put it behind us."

Louisville: After losing three of their previous four — all the losses to ranked teams — the Cardinals were reeling and have to figure out something fast with No. 3 Virginia up next.

"We've got to be able to be big boys and get over it," Mack said. "No other way to put it. I thought tonight our energy level once we started missing shots became flat. That's certainly not the answer."

Syracuse: The Orange still have to play No. 1 Duke and No. 3 Virginia at home and No. 8 North Carolina, Wake Forest and Clemson on the road. That's a daunting schedule before the postseason begins, and point guard Frank Howard is still not performing even close to his level of play. He took one shot and didn't score against Louisville.

Louisville hosts No. 3 Virginia on Saturday at noon.