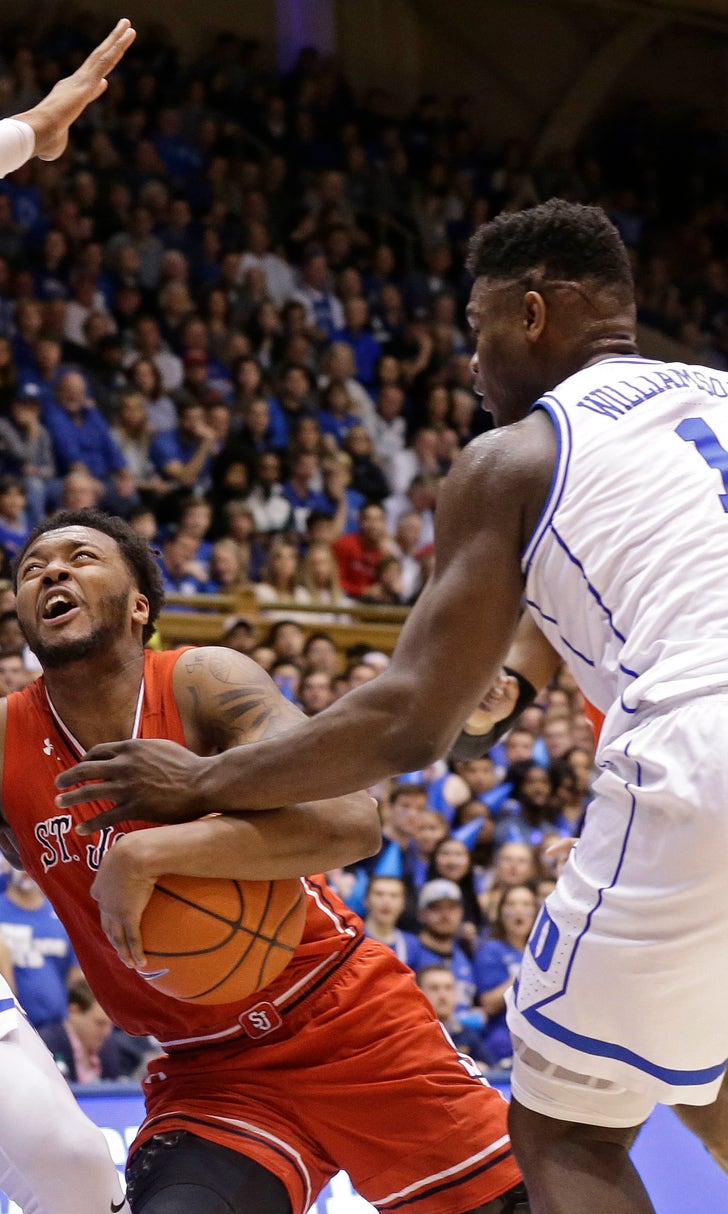 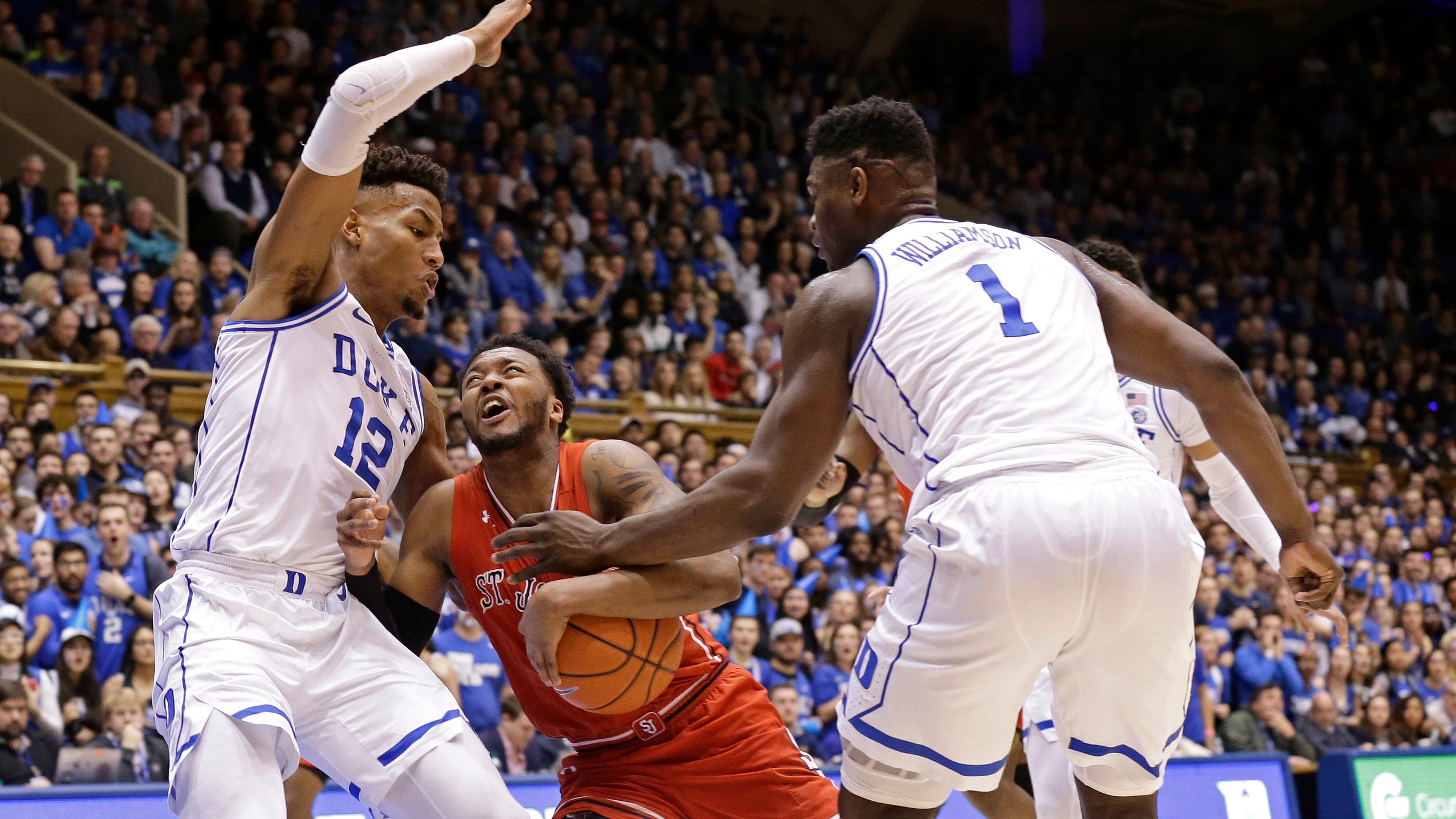 Strong 2nd halves have No. 2 Duke surging into UVa matchup

Good thing, the Blue Devils have been getting off to sluggish starts.

That said, no team in Division I outscores its opponents by more in second halves than the Blue Devils. They average 11.6 points more than opponents after halftime. And they're trending up — that margin jumped to 17 points during their last three games.

"We're really good at making adjustments in-game," co-captain Javin DeLaurier said. "I think that's a testament, especially for the freshmen, (of) being mature really early (in their careers). When coach tells us something or we're not playing our best, we do a really good job of picking it up."

Duke and No. 4 Gonzaga — at 11.5 points — are the only teams in the nation whose average second-half margin is in double figures. The Blue Devils have trailed at halftime in five games, but only once — in a 89-87 loss to those Bulldogs in the Maui Invitational final in November — has that deficit been larger than two points.

So clearly, Duke (20-2, 8-1 Atlantic Coast Conference) is finishing games strong, and now the Blue Devils hope to finish the regular season that way.

Their rematch with No. 3 Virginia (20-1, 8-1) on Saturday night starts a challenging stretch run that includes two meetings with top-10 rival North Carolina plus four other road games against current Top 25 teams.

"It's another big-time game for us," DeLaurier said.

Part of the challenge for this freshman-dominated Duke team has been treating every opponent on the schedule like it's one of those, big-time games from the opening tipoff.

During their last four games, the Blue Devils have trailed at halftime twice, with both coming at home against teams near the bottom of the ACC standings — Georgia Tech and Boston College. They rebounded to win both by double figures.

After what turned into an 80-55 rout of BC , coach Mike Krzyzewski wondered if his team's slow start was at least partly because of the hype surrounding the game against the Cavaliers.

"Ever since we beat St. John's, the only thing you see on ESPN is our game against Virginia," Krzyzewski said. "That's the world that these guys live in. I told them, 'Look, you've got to play this (BC) game.' So I don't know if that was part of it. Again, we're a young team, so we can fall prey to that. Thank goodness we didn't for 40 minutes."

Of course, it doesn't hurt to have a Hall of Fame coach with 1,120 career victories drawing up those halftime adjustments.

Sometimes, it's a strategy shift: The Blue Devils missed 13 of 14 3-pointers in the first half against BC before making more of an effort to drive the lane, scoring 16 points in the paint after halftime after just four points there before it.

And sometimes, the tweak is as simple as reminding the players to communicate on defense.

"For us generally, one of the things we don't do well at the beginning of the game is talk," DeLaurier said. "But we've gotten pretty good at picking that up, especially in the second half. And (point guard Tre Jones) is a big part of that, too. Generally he'll make a play, and get people fired up and we'll all buy in, get it rolling."

Jones — the ACC's leader in assists and assist-turnover ratio — has been key for the Blue Devils, who haven't lost a game he finished since that setback to the Bulldogs in Maui. He missed Duke's 72-70 victory over Virginia on Jan. 19 after injuring his right shoulder in the previous game, a loss to Syracuse.

The Cavaliers hope they'll have their instrumental point guard — Ty Jerome, who missed their last game with back issues. Virginia has had all week to prepare for the Blue Devils and to get their efficient offense clicking again after losing 30 turnovers in its last two games.

One thing's for certain: Neither team can afford to fall behind early and count on a second-half comeback.

It allows "guys to get their bodies right and minds right, because I feel like we've been grinding a little bit lately," big man Jack Salt said. "We did a lot of things that were uncharacteristic (in the last two games). We definitely need some time to focus and get back on track."