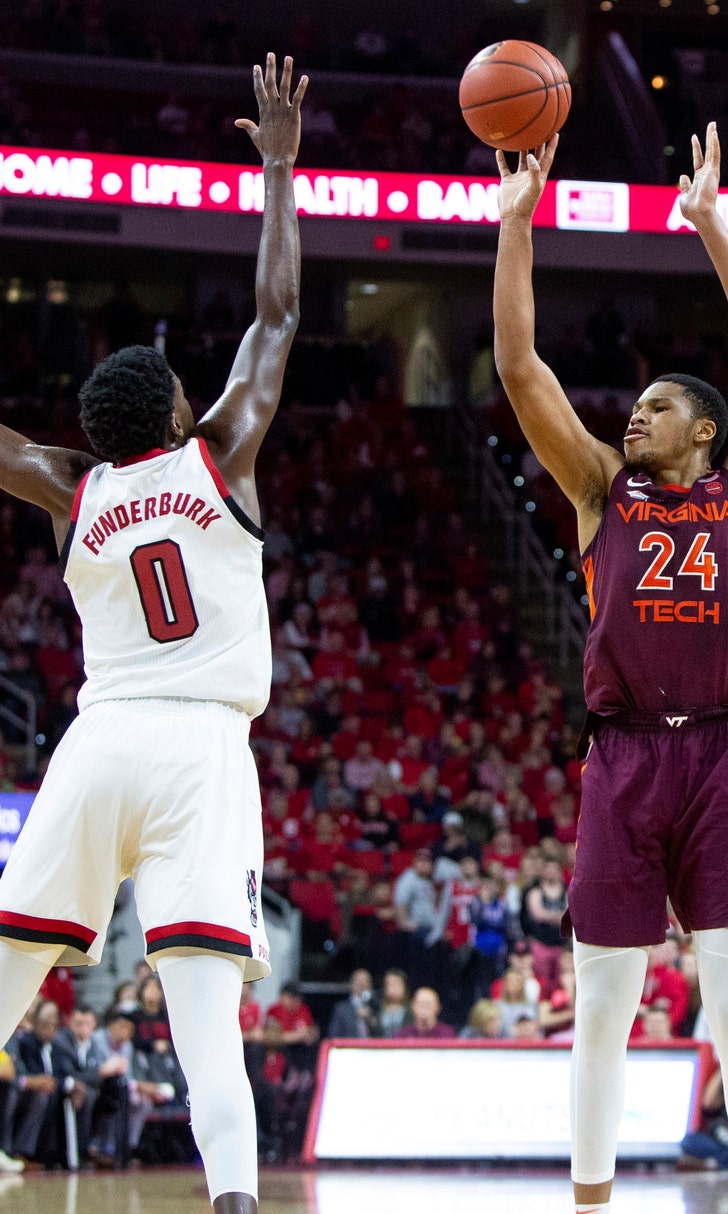 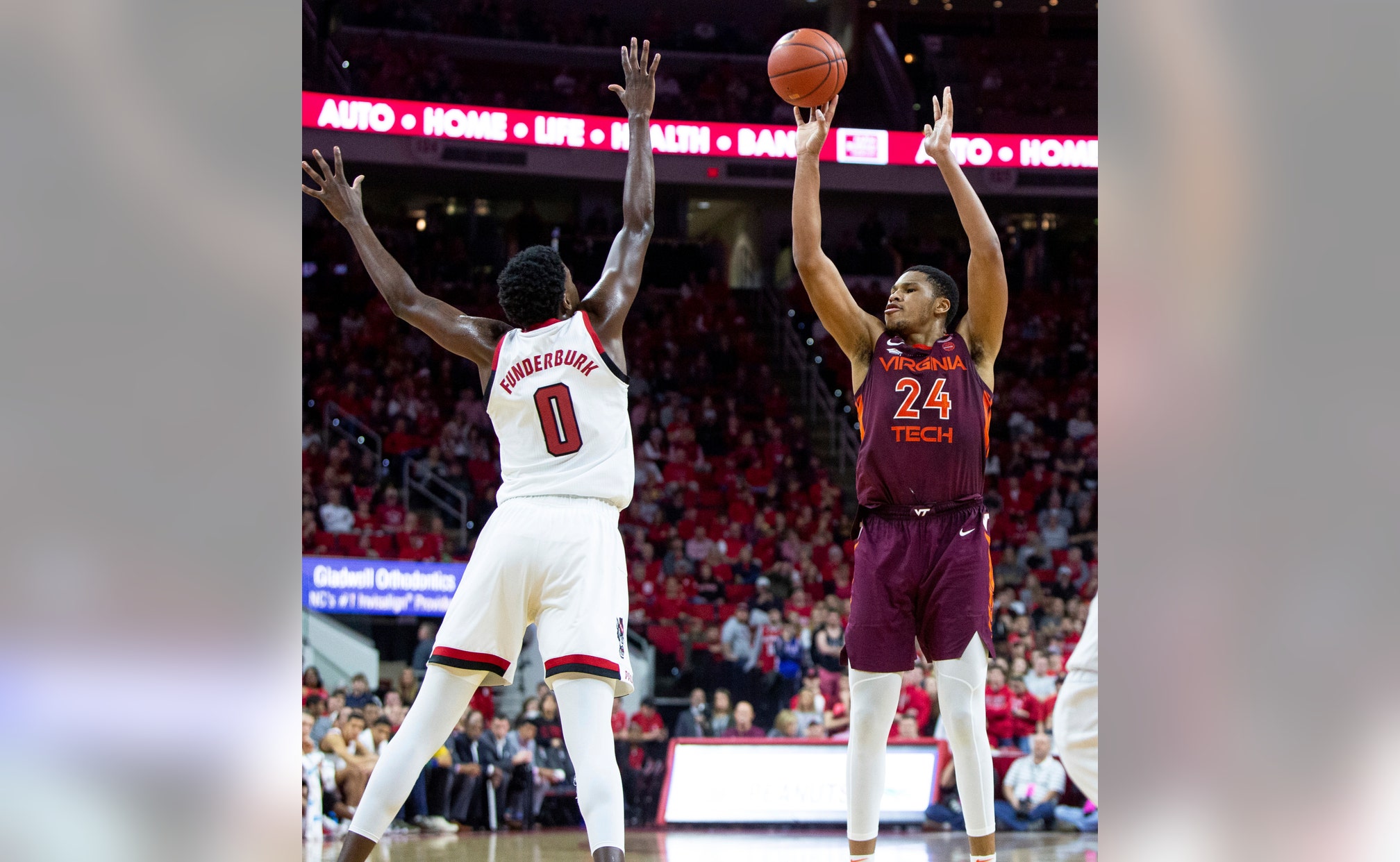 RALEIGH, N.C. (AP) — Miss after miss, they kept coming for No. 23 North Carolina State on Saturday.

Bricked jumpers off the front rim.

Drives that rolled around the cylinder and dropped away.

Shots that didn't hit anything at all.

They never stopped, either, not until the Wolfpack had managed a stunningly low point total that stood as the worst for any Atlantic Coast Conference school in the shot-clock era. N.C. State lost 47-24 to No. 12 Virginia Tech, a throwback output to the long-ago days when teams would hold the ball and turn games into stand-around slowdowns.

Only this came from one of the ACC's best offenses with a shot clock constantly rolling.

"It was crazy," Wolfpack coach Kevin Keatts said. "It was almost like there was something on the rim."

When it was over, N.C. State had put up the lowest point total by a ranked team in more than three decades of the shot-clock era, according to ESPN Stats & Info. It also flirted with the all-time low total — 20 points by St. Louis against George Washington in 2008 — since the shot clock began in the 1985-86 season, ESPN Stats & Info said.

The ACC said it surpassed the previous low mark for a league team set by Georgia Tech in a 57-28 loss to Virginia in January 2015. And N.C. State's 16.7-percent shooting (9 of 54) also now stands as the lowest percentage in the history of a league founded in 1953.

But things started poorly and only got worse.

Perhaps there was a sign that things were off when the school tried to honor the presence of program great David Thompson at PNC Arena by showing his image on the scoreboard in the first half— but instead zeroed in on 1980s player Ernie Myers (who started motioning to the camera that it was a mistake).

The Wolfpack made just 2 of 28 3-pointers. It was N.C. State's lowest total since it beat Duke 12-10 in the 1968 ACC Tournament — back then, underdog teams often used stalls, hoping to keep close.

Sophomore guard Braxton Beverly typified the Wolfpack's afternoon. A week to the day after hitting a buzzer-beating, 3-pointer to beat Clemson on this court, he shot 0 for 12, missing nine times from behind the arc.

N.C. State made 1 of 17 shots to start this one and missed first 11 3-pointers, and trailed just 20-14 at halftime with the Hokies (18-3, 7-2) playing a slower pace with point guard Justin Robinson sidelined by an injury.

"I don't think even in high school I've seen anything like it," Virginia Tech's Ty Outlaw said. "This is a different level, of course. I just thought it was an ugly game. We weren't exactly firing on all cylinders on offense, either."

Virginia Tech shot just 36 percent and made 7 of 21 from behind the arc. But the Hokies didn't need much production against the cold-cold-cold-shooting Wolfpack.

"I was thinking the whole time: 'OK, we're not shooting it well but our defense is staying there and we're going to start making shots eventually,'" Walker said, "and it never happened for us tonight. It's just, it's sad."

Virginia Tech: The Hokies' already-limited numbers were further depleted by Robinson's absence. The senior came in averaging 14.4 points but left early from Wednesday's win at Miami with an injury, then showed up in Raleigh sporting a protective boot on his left foot. But Kerry Blackshear led the way with 13 points and 13 rebounds in a balanced effort with only seven players.

"We can tell that we miss some of his poise and everything," Blackshear said of Robinson. "But I think each and every person stepped up. It wasn't a single person who picks up what he does. It takes all of us and it's going to take all of us."

N.C. State: Keatts' team never gave itself a chance with its complete inability to accomplish the most basic element in the game — putting the ball in the basket.

"We didn't have it today, for whatever reason," Keatts said. "When you look at these numbers, they're mindboggling, the percentage our guys shot."

Virginia Tech: The Hokies host No. 15 Louisville on Tuesday night.