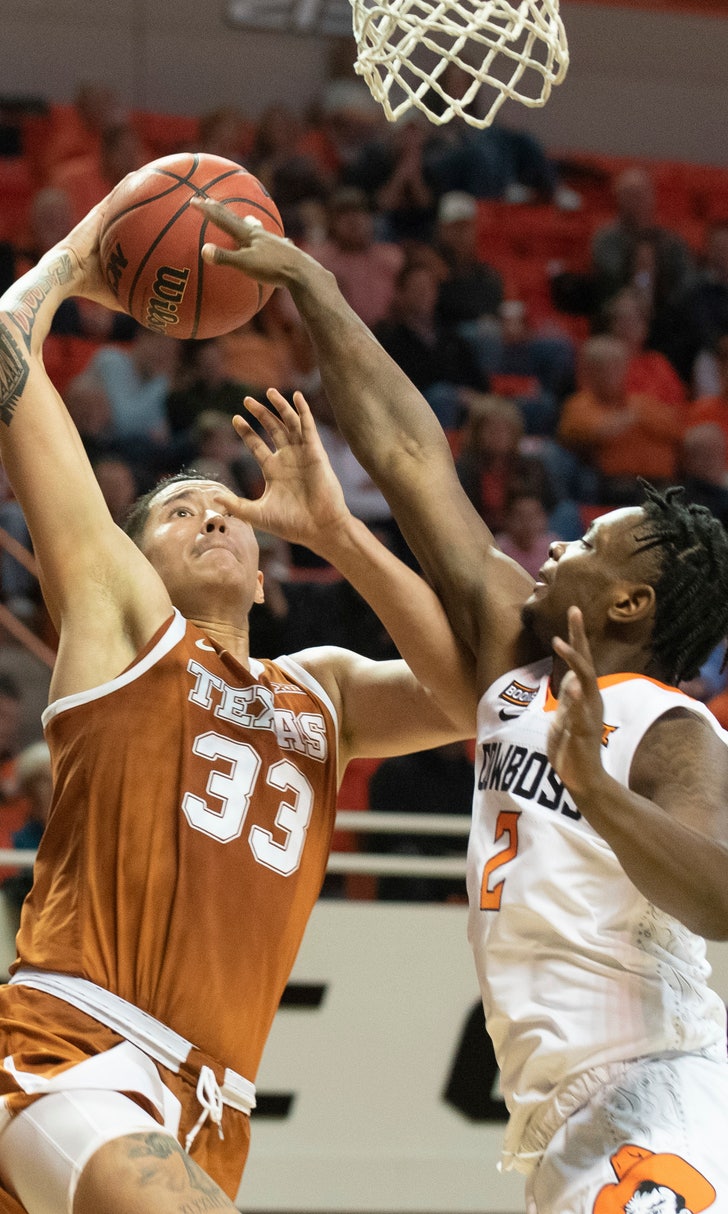 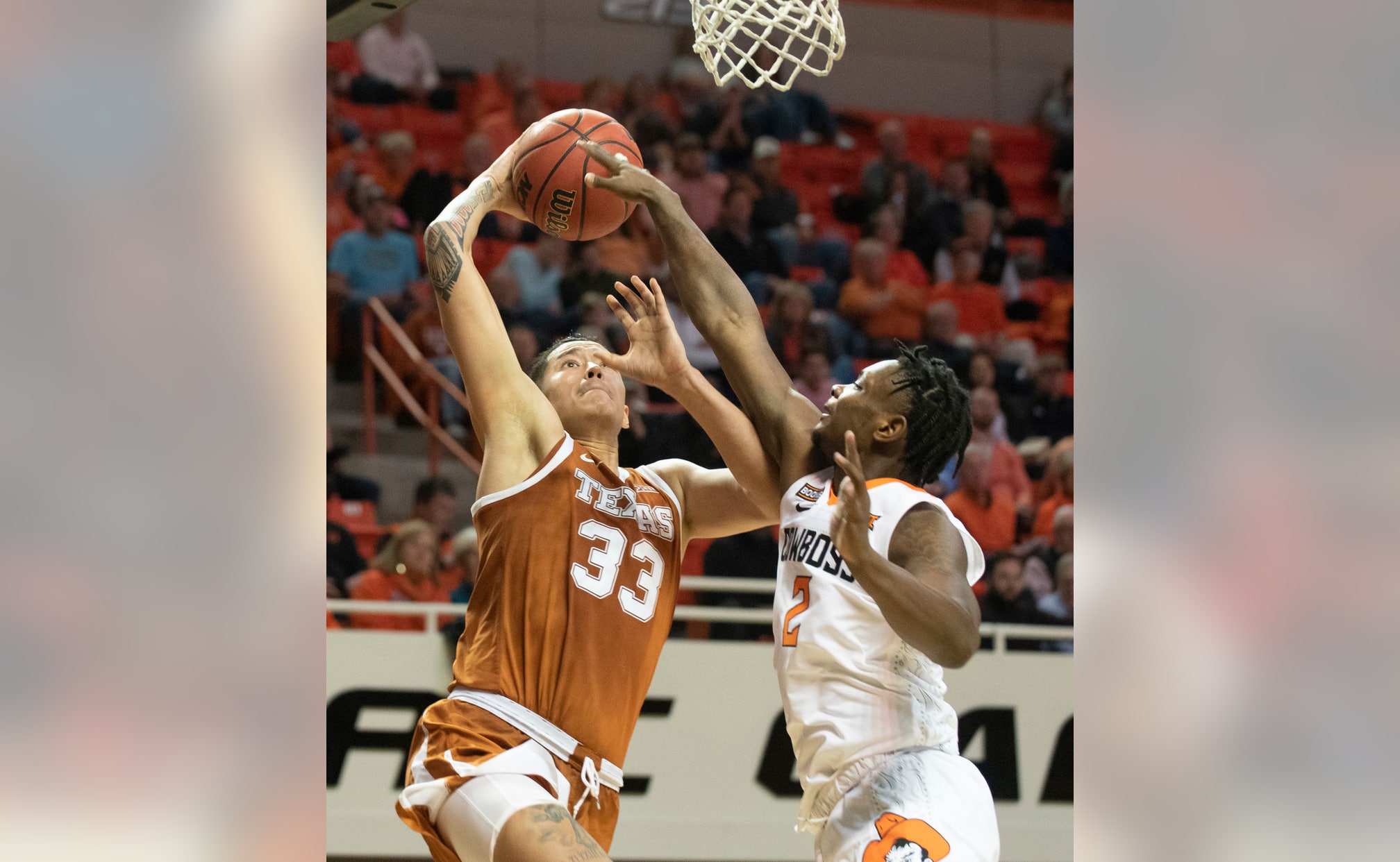 STILLWATER, Okla. (AP) — Courtney Ramey was pulled from the starting lineup for several games, and while his minutes remained about the same, he still didn’t like it. But instead of sulking, he worked harder, played better and has returned to his role of starting guard.

Ramey had 14 points, nine rebounds and six assists, while Kamaka Hepa scored 13 of his career-high 15 points in the second half, to help lead Texas to a 76-64 victory over Oklahoma State on Wednesday night.

Texas coach Shaka Smart is impressed with the way Ramey responded, including his 11 points and season-high eight assists in last Saturday’s 64-50 victory over Kansas State.

“He was terrific,” Smart said. “Just his spirit, it’s two games in a row now where he’s really impacted us with an infectious spirit, especially in practice.

"He had a rough stretch there in December where he wasn’t quite himself, in practice, in games, but I give him a lot of credit. When he was taken out of the lineup, he looked at himself in the mirror and said, ‘Okay, I need to be better and here are some areas where I need to be better.’ I think he’s responded well.”

“It’s about building on the good things you do,” Smart said. “I think for our team, understanding that two games in a row now, it’s been far from perfect, but our players have to drive who we are and what we’re about on the floor, and that starts on the defensive end.”

Freshman Kalib Boone set new career highs with 12 points and seven rebounds off the bench for Oklahoma State (9-7, 0-4), which is now 2-7 in its last nine and one of two remaining teams (Kansas State) without a win in Big 12 play.

“We got some correctable errors there, so that’s encouraging,” said Cowboys coach Mike Boynton. “I’m encouraged that our kids are in a positive frame of mind, believing that they can get this thing turned around. I do believe that we’re getting better. It’s hard to really see positives when you’re losing, though, if we’re being honest. There’s a lot of fight in there. I like what I see in terms of the progress of a lot of our young guys.”

Coming off the win over Kansas State in which they held the Wildcats to just 23 points and 30% shooting in the second half, Texas continued its defensive excellence Wednesday.

“I think our calling card today was our defense,” Ramey said. “We played with a lot of effort, we played physical. They got a couple of good looks but we limited those. I think these last two games are who we want to be. I think it’s who we have to be to contend in this league.”

This marked the fourth straight game in which the Cowboys experienced shooting issues, all losses. They had scored 50 points or fewer in each of their three previous outings, shooting 30.2% or less from the floor in each contest.

After connecting on just three 3-pointers on 39 attempts over the last two games combined, the Cowboys, who average 28.5% on the season, managed to knock down six 3s on 15 attempts on Wednesday.

Texas: After leading by around 10 points for most of the first half, the Longhorns saw their lead shrink to 33-29 early in the second half. But a 12-0 run over the next three-plus minutes pushed the Texas advantage back into double digits. Part of that run included two 3-pointers, as the Longhorns made 15 of 32 from beyond the arc (46.9%) overall. After connecting on 10 of 23 on 3s (43.5%) in their previous game against Kansas State, Texas is now 5-1 in six games this season when hitting double-digit 3s.

Oklahoma State: The Cowboys’ shooting woes continued as they fell behind early and seemed to be chasing the game all evening. Texas jumped to a 15-4 lead over the first eight minutes as Oklahoma State shot just 2 of 12 from the floor. While the Cowboys battled back to pull to within 18-15 with 7:10 remaining in the opening half, the Longhorns scored the next eight points to restore a double-digit lead and kept their advantage around that mark for the next six-plus minutes. Several times over the rest of the night they managed to get to within four or six points, but the Cowboys couldn’t get any closer.

Oklahoma State leading scorer Lindy Waters, who entered the day averaging 12.0 points per game but had zero in the Cowboys’ last game, a 52-40 loss at TCU last Saturday, didn’t score until nearly seven minutes into the second half. After going 0 for 8 from the field against TCU, Waters ended up with nine points (on 3-of-9 shooting) and four rebounds. … Texas, which led the entire game from wire-to-wire, recorded a season-high 11 blocked shots, while Oklahoma State had just two. … Oklahoma State’s bench outscored the Longhorns’ reserves 32-18. … The teams were even in rebounds, 36-36.

Texas: The Longhorns return home to face No. 6 Kansas on Saturday.

Oklahoma State: The path doesn’t get any easier for the Cowboys, who remain home to host No. 2 Baylor on Saturday.